Annika Forkert explores some intersections between British composition and music programming and the so-called new music in Europe.

In an episode of the British TV show University Challenge in January 2019, the quizmaster Jeremy Paxman asked the contestants which musical technique Elisabeth Lutyens had introduced in Britain. The answer, twelve-tone music, only came with some hesitation, after Paxman had given the hint that this technique had also been Arnold Schoenberg’s.

It does not need adding that it would be a stretch to deduce from this little anecdote a general lack of knowledge of British New Music, or of New Music in Britain before the encounters between European and British avant-gardes at Darmstadt, Dartington, and elsewhere from the 1950s. What perhaps does need adding is that the composer implicated in this event, Elisabeth Lutyens (1906–83), would have had some things to say on the topic of her technique being that of Schoenberg’s. She had spilled a good deal of ink over her own independent discovery of serialism. Apart from Humphrey Searle (1915–82), a private pupil of Webern, she was the only openly serial British composer in the 1940s, struggling to negotiate the sometimes vicious pitfalls not just of gender and composition, but also between ‘British’ and ‘German’ styles and techniques of composition. Schoenberg’s pantonality and Webern’s rising complexity was debated with the gloves off, but the curious contradiction seems to be that while everyone had an opinion about this music at the time, it often appears as if its possibilities and implications bypassed most of British composition in the early 20th century.

For Lutyens, the more personal reason for her touchiness about her perception as a Schoenberg disciple was that any possible connection with this hothouse of Viennese serialism posed a constant threat to her stylistic independence as a composer married to one of the most notorious promoters of European New Music in Britain, Edward Clark.

Edward Clark (1888–1962), son of Newcastle-upon-Tyne coal merchants and Schoenberg’s earliest English pupil, played several important, but largely unremembered, roles in the business of contemporary music in Britain during his lifetime. He worked for the BBC Music Department, the London Contemporary Music Centre, later the Institute for Contemporary Arts, and the International Society for Contemporary Music.  He also founded the Association of British Musicians and the Wartime North East Regional Orchestra (“NERO”), and, whenever solvent enough, organised concerts of European music in London.

‘The land where good foreign music comes to die’?

Clark was not the only such promoter active in Britain before the Second World War. Eugene Goossens, for example, was Clark’s freelance competitor in the 1920s, Kenneth A. Wright a like-minded colleague at the BBC in the 1930s, and Francis Chagrin founded the Society (initially named Committee) for the Promotion of New Music in the 1940s.

The BBC’s revolutionary programming politics during the 1920s and 1930s played an integral part in this scheme.[1] More often than not, the presence of one or the other musician or composer on the wavelengths was owed to the personal connections of one of the members of the Department. Clark, for example repeatedly invited his previous conducting teacher Oskar Fried to London, where he conducted programmes straddling music by Mozart, Holst, Mahler, and Ireland.[2] Clark’s enthusiasm was infectious. He successfully worked with the Director of Music, Adrian Boult, who used his considerable influence to organise and lead performances of works by contemporary composers (as for example in 1934, when he conducted Berg’s Wozzeck in London). 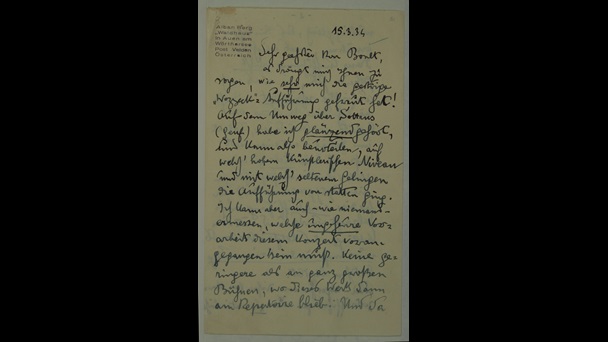 This letter to the conductor Adrian Boult was written by Berg the day after he heard the BBC broadcast of the performance of his opera Wozzeck, conducted by Boult. 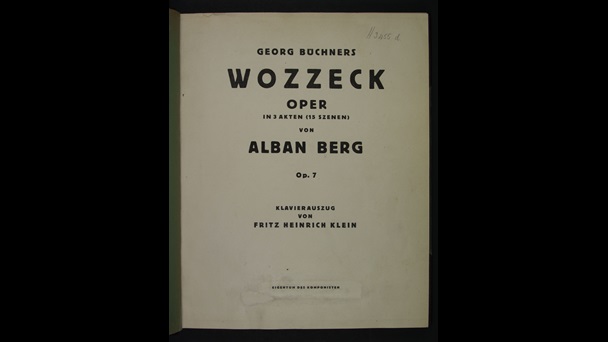 This vocal score of Berg’s first opera, Wozzeck, was published by the composer himself in 1922.

And even on a first glance more conservative figures and institutions added to the excitement surrounding musical “novelties” in British (which mostly meant London) concert life of the early 20th century. One such occasion was when Henry Wood premiered Schoenberg’s Five Orchestral Pieces op. 16 at a Proms concert in 1912 (and repeated this performance in 1914 upon Clark’s mediation).[3]

It was felt necessary by Wood’s Proms as well as John Reith’s BBC to invite interest in contemporary music from the Continent as well as from British composers and to combat what began to be perceived as two intersecting and growing gaps: that between contemporary music and audiences, and that between music ‘here’ and ‘over there’. In a privately printed lecture on Debussy at the Tynemouth Congregational Church Literary and Debating Society in 1908, Clark had complained that England was already ‘the land where good foreign music comes to die’ and urged his audience to instead ‘understand the music of today before it becomes that of yesterday’.[4] 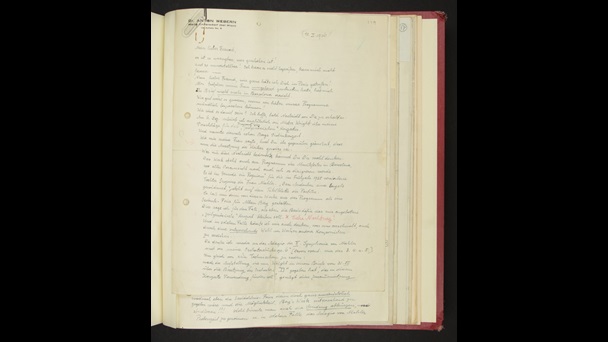 This letter from Anton Webern to Edward Clark was written in January 1936 and concerns preparations for a broadcast concert that Clark was organising and Webern was to conduct.

One organisation devoted to this credo was the International Society for Contemporary Music. Even during the process of planning for its first Festival in Salzburg 1922, the mostly Austrian organisers had made sure of British support. Music writer and Cambridge fellow Edward Dent and critic Edwin Evans were invited to act as committee members, while Ethel Smyth’s Odelette for soprano and piano was performed at Salzburg in a chamber music concert alongside de Falla, Hindemith, and Bloch.[5] Thanks to their reputation as diplomatic and neutral, the British delegation returned home with great responsibility for the new Society: Dent became first President and London its HQ (where it would remain until the 1950s). 1931 saw the Society’s first ‘British’ Festival come to Oxford and London, with Vaughan Williams being performed alongside Szymanowski and Roussel. Webern was played here as well as on the BBC.

In fact, early 20th-century Britain was where Schoenberg first turned to when his circumstances in National-socialist Germany became precarious. After the loss of his post in Berlin and what in effect turned out to be his flight from the Third Reich to France in May 1933, he sent Clark a postcard (Schoenberg’s standard way of communicating urgent requests), asking for performance opportunities for recent works and his nearly finished Moses und Aron as well as publishers in Britain: ‘I should not be lost. Or only if everything and everyone deserts me. You will think of me, won’t you?’[6]

Schoenberg eventually moved to America despite Clark’s efforts, but it is the reputation of Britain as a land open to new music that is perhaps surprising. 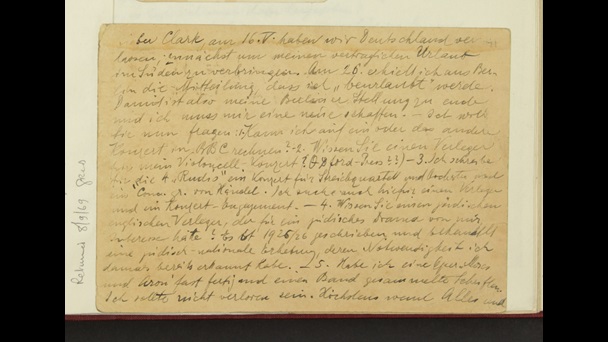 Schoenberg’s postcard to his former pupil, the British conductor, critic and music producer Edward Clark, was sent from Paris where the composer had moved together with his family in 1933 to escape Nazi Germany.

We tend to think in opposites like modernists versus conservatives, and of most British music of the time as pastorally tonal. Besides Wood, another presumed stalwart of this Englishness and tunefulness in music, Ralph Vaughan Williams, occasionally acted as an advocate of new music activities.

While in the process of publishing his seemingly anti-internationalist thoughts on national music, he demonstrated loyal patronage of the Macnaghten-Lemare concerts in the 1930s (a series of concerts of and for young British composers, many of them influenced by study trips to the Continent like Elizabeth Maconchy or Alan Rawsthorne).[7] His half ironic, half serious Fourth Symphony bears witness to this seeming split in the composer’s mind, just as his support of the Communist composer Alan Bush and the work on behalf of the Home Office Committee for the Release of Interned Musicians during the Second World War do not sit comfortably with the notion of ‘Uncle Ralph’.

But some British musicians of the later part of the century were keen on floating the idea of a toxic conservative atmosphere in early 20th-century Britain in order to promote their own innovatory claims by comparison. Thus, for example, Peter Maxwell Davies’s 1956 complaint in The Score about ‘a peculiarly English misconception – that ‘inspiration’ is incompatible with the methods of ‘conscious construction’ one hears about from the continent.[8]

Edward Clark and Elisabeth Lutyens were not the only ones to criticise this state of affairs, but Lutyens cut down to the chase when, in a draft for her candid autobiography around 1970, she sought to remind those younger composers of Clark and his colleagues’ work of the 1930s: ‘Amidst all the bru-ha-ha [of 50 years of broadcasting] there appears to be a prevailing idea that the broadcasting of contemporary music – as we understand it to-day – is a thing of the last decade or so, or almost – as I read somewhere – an invention of Sir William Glock’s and that previously it largely consisted of works by Elgar and Vaughan Williams with the occasional Mahler by a foreign conductor. […] I do assure the young of to-day that this is absolute nonsense.’[9]

The breadth and range of musical activity evolving around new music in early 20th-century Britain is still not fully appreciated, while more and more figures and events come to light.

[9] Elisabeth Lutyens in a manuscript draft for her autobiography A Goldfish Bowl. British Library, MS Mus. 1841/2/1.