Mark Berry introduces the three composers labelled as key members of the ‘Second Viennese School’, each influential in his own way on musical modernism throughout the remainder of the 20th century.

When did ‘modern music’ or, alternatively and perhaps not quite the same, ‘new music’ begin? Everyone has a candidate, or a few. Richard Wagner’s Tristan und Isolde? Claude Debussy’s Prélude à l’après-midi d’un faune? Igor Stravinsky’s Rite of Spring? However, no one would deny Arnold Schoenberg his role in that story. Likewise, amongst that century’s greatest composers, no one would deny hallowed places to his two most renowned pupils, Anton (von) Webern and Alban Berg. 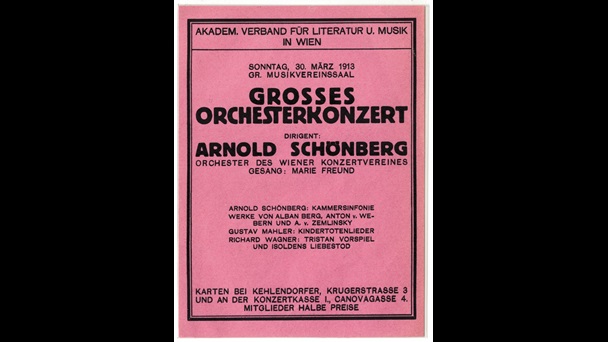 This flyer was issued to publicise a concert conducted by Arnold Schoenberg, which later became known as the Skandalkonzert, as opponents of Schoenberg and his disciples provoked a riot at the concert.

In 1908, with his Second String Quartet, op.10, Schoenberg led the musical world, whether it liked it or not, to breathe, in the words of its soprano soloist, ‘the air of another planet’, not necessarily the tonal air of the so-called ‘common practice era’ of the previous three centuries. A decade-and-a-half later, he announced to the world his new method of ‘composing with twelve notes related only to one another’, or twelve-note or dodecaphonic (‘twelve-tone’, in US English) music. In both cases, Webern, Berg, and many others followed suit. Many others did not, some composers and some audiences remaining not just resistant but angry and hostile. Schoenberg and his school remain, for many, intensely controversial figures. For many others, they are ‘just’ great composers, of great music, much of it too little performed. It is sometimes better to step back from the controversies, to consider composers and music as we should others: both as historical figures and as creators of work that still speak to us and to our present condition. No one can command love, whether for the music of the Second Viennese School or anything else. One might, however, be curious as to why it has inspired such devotion.

Schoenberg unquestionably led an interesting, often very difficult life. One can hardly say ‘irrespective of his music’, but there is a ‘conventional’ biography worth telling: of someone born in 1874 in Vienna to far from wealthy Jewish parents, in many ways musically self-taught, who fought during the First World War, who ended up a refugee from Hitler’s Berlin, in Los Angeles, where he died, celebrated and reviled in almost equal measure as the most heroic and most intellectual of 20th-century modernist composers. Claims of intellectualism are in many ways misleading, though. It may also be noted that they are rarely without at least a whiff of anti-Semitism (‘those Jews: too clever by half’), often, especially in English-language circles, accompanied by anti-German sentiment (‘they take everything so seriously’), the two prejudices often combined.

Schoenberg’s Five Orchestral Pieces, op.16, help show how misleading such claims can be. The confidence with which he wrote for a huge, post-Wagnerian orchestra is extraordinary for one with relatively little orchestral experience at all. (His previous work on the giant orchestral cantata, Gurrelieder, is still more so.) Schoenberg was already keen to distance himself, however, from Wagner and Richard Strauss, writing to the pianist-composer, Ferruccio Busoni that he should note ‘how everything becomes more delicate, thinned down. How refracted colour-tones stand in place of what had been bright and glowing … We have had our fill, to the point of surfeit, of Wagner’s full, smooth sonorities.’ Such writing, however, was highly instinctive, almost an outpouring of the Freudian unconscious – as with other works from the same year, 1911: the Three Piano Pieces, op.11, the song cycle, The Book of the Hanging Gardens, op.15, the Five Orchestral Pieces, op.16, and his first completed opera, Erwartung, op.17. Even if that had not been Schoenberg’s general way – he was Romantically insistent on the ‘inspiration’ of a ‘genius’ – he would hardly have had time to write so much music, each work so very different from its predecessor and successor, without writing at white heat. 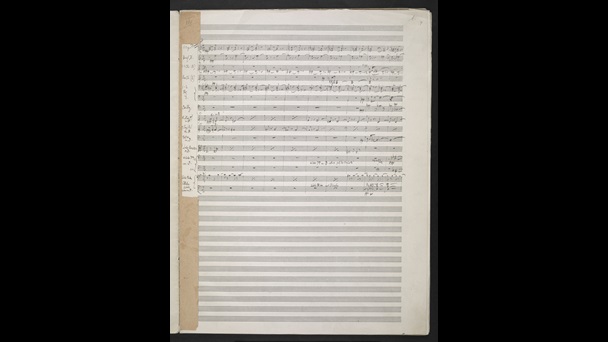 This manuscript is a fair copy of three pieces (1, 3, 4 and 5, bars 1-16) from Arnold Schoenberg’s Fünf Orchesterstücke, op.16, written out by the composer and his pupil Erwin Stein.

Usage terms © 1912, C. F. Peters, Leipzig.  Reprinted by permission of Peters Edition Limited, London. Except as otherwise permitted under your national copyright law this material may not be copied or distributed further.
Held by© Peters Edition

https://sounds.bl.uk/resources/Music-since-1900/Schoenberg%20Five%20pieces%20No.%203.mp3
Update Required To play the media you will need to either update your browser to a recent version or update your Flash plugin.

A new world of Klangfarbenmelodie, in which a melody may be constructed upon changes in colour rather than changes in pitch, is suggested in the third of the op.16 Pieces. That may sound forbidding; it is far less so when one listens, perhaps thinking of it as sunlight glistening on the Alpine lake, which he later claimed had inspired him, or as the process of looking at it, perhaps even of painting it. For Schoenberg was a painter too, a highly regarded one, by no less a friend and colleague than Wassily Kandinsky. The fifth piece sounds truly open-ended: a rebuke to any effort, even if only conceptual, to ‘resolve’. It is what it is, stops when it stops: we might say the same of our listening.

What, though, of the twelve-note Piano Piece, op.33b? Does that not mark a hardening of ‘free atonality’ into the unquestionable ‘intellectualism’ of the notorious twelve-note ‘method’? Along with its companion, op. 33a, this piano piece is perhaps more indebted to the 19th-century spirit of Brahms and, beyond him, Schumann, than any others Schoenberg had written. It almost could be entitled ‘Intermezzo’, in just that German Romantic tradition. Such conservatism, or nostalgia, led the young avant-gardist Pierre Boulez to considerable suspicion of Schoenberg. Indeed, upon Schoenberg’s death in 1951, Boulez penned a celebration of a new musical world as well as a tribute to an old one: ‘Schoenberg is dead’. Look at the music on the page and the resemblance to Brahms, albeit without a hint of imitation, is striking. Harmony is not tonal; the melodies might almost be – albeit, crucially, with a twist. Perhaps they should be played and listened to both as something with strong, imperishable roots in tradition, which has yet, as music always has, broken with it too: ‘air of another planet’. 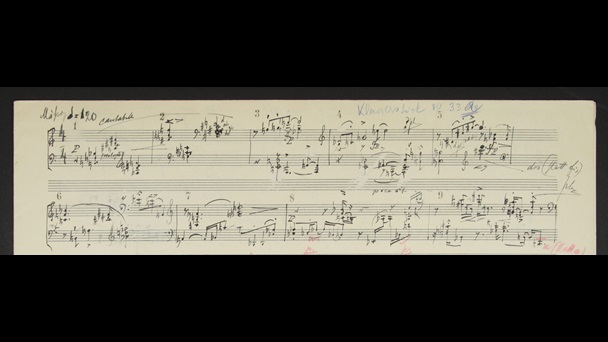 This manuscript of Schoenberg’s Klavierstück op.33a in his own hand shows the work as it was to be published, albeit with a number of corrections and alterations.

If Boulez suspected Schoenberg whilst honouring him, conducting Schoenberg’s music whilst insisting upon his reservations concerning much of it, he proved, especially in his youth, a less ambivalent advocate for Webern. Indeed, the enfant terrible, spitting contempt for musical nostalgia, declared Webern’s music the ‘threshold’ for his own and other post-Second World War music. Certainly, amongst our Viennese Holy Trinity – Arnold the Father, Alban the Son, and Anton the Holy Ghost – Webern seemed less regretful about the loss of tonality. That is true, at least, on the surface, although, for all three, old Viennese musical principles – dance (waltz) and marching rhythms, sonata and fugal forms too – continued to do a good deal of work in the musical background, sometimes the foreground too. Moreover, Webern as understood after his death in 1945 was emphatically not Webern as he knew himself. Listen to him conducting Berg’s Violin Concerto; you will hear a musician strongly in a Romantic performing tradition – quite unlike early Boulez recordings of Webern, or indeed of Schoenberg and Berg.

All three wrote sets of Orchestral Pieces, Berg’s and Webern’s very much in response to Schoenberg’s, yet quite different, imbued with their own musical personalities. The brevity of Webern’s is characteristic; whereas Schoenberg and Berg sometimes wrote aphoristically, it was relatively unusual for them to do so. Webern tended to say once what he had to say and leave it at that, his works gleaming in their bejewelled, geometrical clarity. The mean length of his Op.6 Orchestral Pieces is but 25 bars. However, to dwell on brevity is perhaps as misleading as emphasising Schoenberg’s ‘intellectualism’. Webern distils the essence of longer music into a phrase, a bar, even an aural sigh. To hear this set is almost to hear a compressed version of a symphony by Gustav Mahler, adored by all three composers. The fourth piece, essentially a funeral march and initially marked as such, expresses grief personal (the loss of Webern’s mother) and universal: not unlike, say, a similar movement in Mahler. Again, a huge orchestra is employed, albeit sparingly. 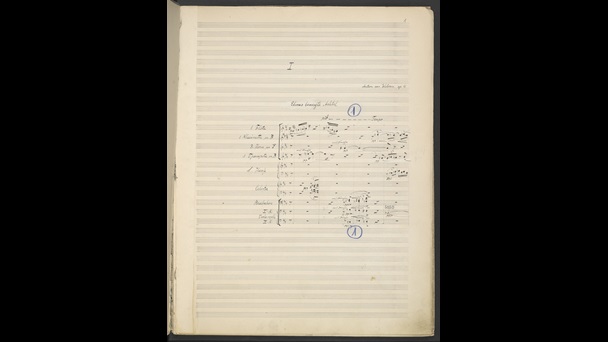 This manuscript full score of Anton Webern’s Sechs Stücke für grosses Orchester, represents a fair copy of the work which was composed in 1909, and was presented by the composer to his teacher, Arnold Schoenberg, in May or June 1911.

A joke by Alban Berg 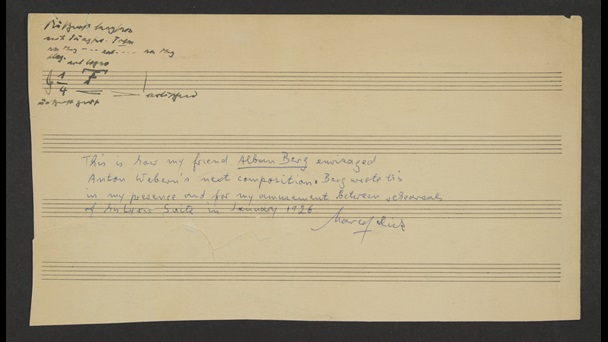 This tiny doodle was Alban Berg's light-hearted idea of what his colleague Anton Webern’s next piece would look like!

Berg, the youngest of the three, is generally held to have been the most ‘Romantic’, the most regretful for the loss of tonality – although he, like Schoenberg and Webern, both left it (mostly) behind and adopted the dodecaphonic method. Boulez, especially when young, thought so; he noted disapprovingly, even as he admired their compositional technique, a ‘desire for reconciliation’, not least with tonality, in three late works: the Violin Concerto, the concert aria, Der Wein, and the unfinished opera, Lulu, whose premiere in its full three-act version, as completed by Friedrich Cerha, Boulez would conduct in 1979. 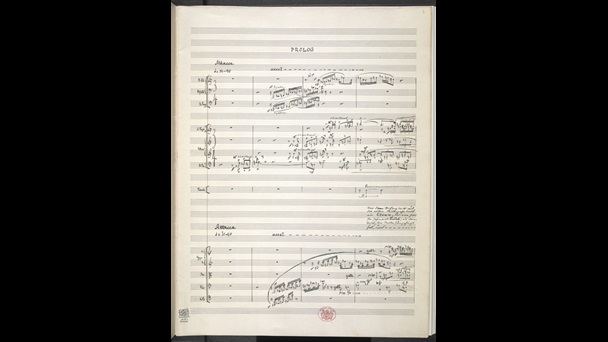 This manuscript of the prologue to Alban Berg’s opera Lulu was presented by the composer to Arnold Schoenberg, to whom the work was dedicated, on his 60th birthday in 1934.

One should always, however, beware taking what composers say, about themselves or other composers, at their word. That Boulez responded warmly – in more than one sense – to Berg’s ingenuity was evident from how often he conducted Berg’s music, how well he clarified its textures. For Berg’s music is as tightly constructed as that of Schoenberg and Webern; its construction, indeed, is often more overt. Lulu is, to be sure, the male-gaze story of a femme fatale, a celebration of exuberant eroticism and free(ish) sexuality; Berg’s sister, a lesbian, is surely in part the model for the Countess Geschwitz, whose true love for Lulu marks her out as the most sympathetic – some would say, the only sympathetic – character in the opera. Yet, even as the score’s sensuality seduces, there are, in Berg’s musical palindromes, intellectual satisfaction and structural coherence as dramatically telling as anything in Schoenberg. In score and performance: seek, and ye shall find.