Steven Dryden looks at how Britain’s first lesbian magazine came about and its impact on society.

In 1958 the Homosexual Law Reform Society (HLRS) was founded in the wake of the Wolfenden Report, published on 4 September 1957. The society launched with a series of high profile advertisements in national newspapers and became a beacon for many socially isolated men and women, who were now able to make contact with each other and start to build communities.

How did Arena Three start?

In 1963 Antony Grey, the HLRS’ secretary from 1962 to 1970, was contacted by Esmé Langley, who sought advice about setting up a magazine for lesbians. Through the networks of HLRS, Langley made contact with future contributors Cynthia Reid, Julie Switsur and Patricia Dunckley. The Minorities Research Group (MRG) was formed later that year and its first task was to create the first periodical for lesbians published in Britain.

In spring 1964 the first issue of Arena Three was published, achieving just this. In it, the agenda of the MRG was set out:

[T]o conduct and to collaborate in research into the homosexual condition, especially as it concerns women; and to disseminate information and items of interest to universities, institutions, social and education workers, writers, poets, editors, employers and, in short, all those genuinely in quest of enlightenment about what has been called 'the misty, unmapped world of feminine homosexuality.' 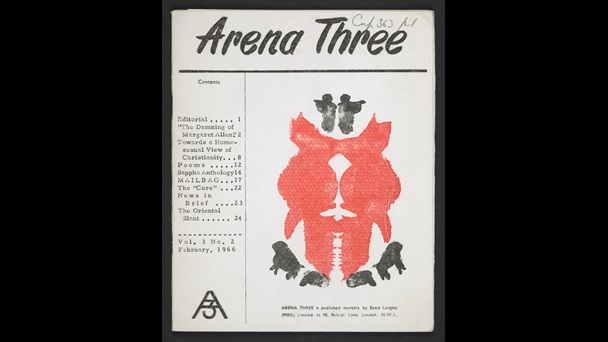 Diana Chapman, a founding member of Arena Three, articulated the magazine's key objectives in this clip from her oral history interview, held at the British Library Sound Archive.

Diana Chapman on the founding of Arena Three

The majority of subscribers were lesbians, although the periodical was also read by bisexuals, gay men and professionals with an interest in homosexuality. The readership was predominantly middle-class, due to it being advertised in periodicals like the New Statesman, and like many early periodicals for the LGBTQ community at the time, Arena Three was only available via mail order. In December 1964 however, News of the World published an article on Arena Three introducing it to a working-class readership.

Despite this, access to Arena Three was far from easy for many women. Prompted by warnings from the HLRS about the potential legal implications of married women reading the publication, the original founders of Arena Three set in place a requirement for married women to obtain written consent from their husbands as part of their subscription requests.

In the first year, the core members of the MRG wrote much of the content, but as the readership grew, so did its contributors. Clare Barringer led the book review section and Lorna Gulston contributed articles on lesbian history. The letters pages were by far the most popular section, providing a forum where women could make contact with each other around the country – as well as crucially, finding others in their own hometown.

What impact did Arena Three have on society?

The social function of Arena Three cannot be understated, with demand for meetings and events evident from the very earliest issues. The first meeting took place at the Shakespeare’s Head pub on Carnaby Street, London, in May 1964. These meetings were held monthly and usually began with a discussion or talk, before opening out into a more social affair.

The meetings themselves generated debate about lesbian identities and consensus was often hard to come by. On top of this, the presence of ‘butch’ lesbians at these meetings – who dressed in men’s suits and styled their hair with Brylcreem – made venue owners suspicious as spaces were usually booked for ‘women only’ meetings.

The poet and author Maureen Duffy, who was active on the London scene in the 1960s, can be heard in this clip, describing the identities and politics of ‘butch’ and ‘femme’ lesbians.

One of the early meetings addressed this issue head on by tabling a motion for discussion: ‘That this house considers the wearing of male attire at MRG meetings is inappropriate’. The vote went against the motion, by 28 to 25, with six abstentions – meaning full 'butch' attire continued to be allowed at MRG meetings. However, a tone was set that ‘butch’ lesbians were not welcome in the MRG community.

The ‘butch’ identity was also evident during this period at the lesbian club The Gateways in Chelsea, London. In its early years Arena Three was critical towards the lesbian bars and clubs of the time, despite many of its founding members being regulars on the scene. Some scholars have suggested that there was a class dimension to the hostility towards butch lesbian identities.

Women of all identities?

The nature of lesbian identities was regularly discussed in Arena Three. Married lesbians and lesbian mothers were a minority within the readership, but they existed. Their experiences and the issues they faced were explored in several articles which ultimately revolved around questioning the societal and family pressure for women to marry and have children. These articles often generated discussion that would later be magnified by the emergence of the Women’s Liberation Movement in the early 1970s.

Researchers also contacted Arena Three in order to interview and collect information from its readership. These relationships were often problematic however, especially if researchers’ findings conflicted with the views of the MRG.

The rocky relationships also extended to media interactions with the MRG and Arena Three. In 1967 several members of the MRG appeared in the BBC-produced Man Alive series in a programme exploring female homosexuality in light of the Sexual Offences Act passing into law, partially decriminalising homosexuality. However, the MRG was critical of the programme owing to its focus upon participants with a ‘butch’ identity. So while the MRG welcomed discussion in the media, it was often contingent on representations conforming to its own notion of lesbian identity.

The end of Arena Three

The final issue of Arena Three was published in July 1971, owing largely to factions and conflict over administration and finances within the main organising body of the MRG. From the ashes though, a new publication called Sappho was born, with the first issue being published in April 1972. Sappho had a progressive feminist voice which was in keeping with the convergence of the ideas of gay liberation and women’s liberation in the early 1970s. 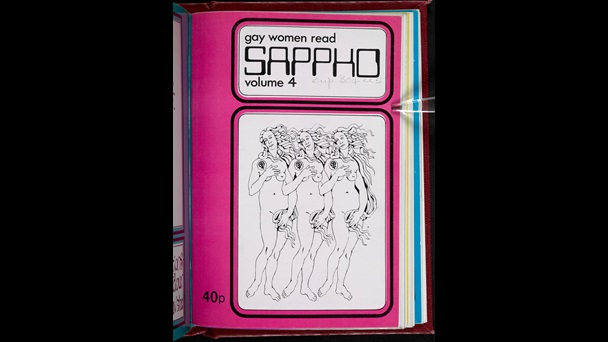 Jackie Forster, one of the main instigators of Sappho, reflects on the motivation for its creation in this clip from her oral history interview.

Sappho would be the dominant means by which a lesbian feminist voice was developed in the UK until its final issue was published in 1981.


With thanks to Maureen Duffy, Jill Gardiner and Anne Clements.