Jen Yockney MBE discusses the longest-running magazine for bisexuals Bi Community News – how it emerged, the content it covers and its relationship with the gay press.

Bi Community News (commonly known as BCN) wasn’t the first magazine for the UK bisexual community but after more than 20 years, it has been by far the most long-lasting.

The bi-monthly magazine – with a focus on grassroots community organising and debate – started publishing in September 1995, following a discussion at the bisexuality conference BiCon held in Birmingham that month. This session had been prompted by the closure earlier that year of bi zine BiFrost, and concern that the bi community would lack a forum or way for bi people to keep in touch outside the few big cities with viable bi groups. The name of the magazine came through a democratic vote – everyone who bought the first edition (titled ‘Issue Zero’), from September 1995, got a ballot paper to choose from several suggested titles.

When BCN started, the internet was out of most people’s reach, so for queers wanting to keep in touch with one another, the clatter of the letterbox was the signal of incoming mail. Whether a newsletter like the early BCN format, or its predecessors BiFrost and Bi Monthly, or overseas counterparts Anything That Moves and North Bi North West, bi press came about as a way of keeping in touch for people interested in the scattered beacons of bi organising, which included local groups, helplines and bi community events. What does Bi Community News do?

There are still very few bi-specific spaces in the UK; BCN however, serves this need, acting as an all-encompassing resource for the community. It helps direct people to local, national and international events, signposts scarce resources, and provides a space for debate and inspiration for new work.

It also acts as a publishing house for pamphlets on running bi outreach stalls at pride festivals, and as a standalone directory of bi resources, Everything you always wanted to know about bisexuality in the UK but didn’t know who to ask. 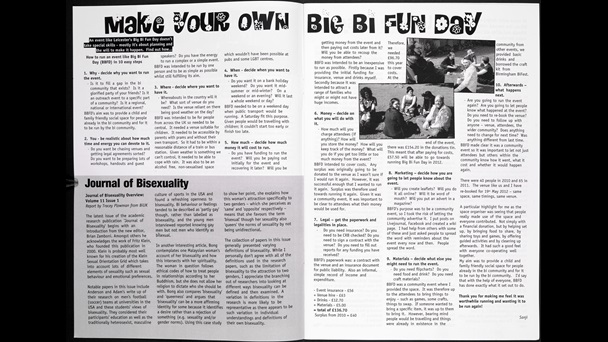 The magazine promotes grassroots activities around the UK (issue 107, 2011)

In the early years, the focus of the magazine was on bi events and groups, with a wider view of gay rights campaigns that were often bi-erasing or bi-excluding. In the 1980s, 1990s and 2000s for example, organisations such as the lesbian and gay wing of Unison barred bi people from membership, while Stonewall’s equality campaigns presented the world as gay and straight. The stories of the battles to change those attitudes evolved from issue to issue of the magazine.

Often it focused on political issues within the bi community as well as beyond. For example, when London Bi Women’s Group banned transgender people from using their support space in 1998, a debate raged through the letters pages and main articles for months. Meanwhile, a report on BiCon in 2001 challenged financial management by the event’s organising committee.

Over the years, the focus shifted from primarily a social and networking tool to reflect growing representation of distinct bi experience in research – rather than being ‘lumped in’ with gay and lesbian people. The 'Bi Media Watch' section for example, grew from reporting a few rare instances of bi representation on television and film to its gradual improvement. Throughout the gay press – whether the weekly Pink Paper or monthly titles GT, Diva, Shebang, g3, Phase or Attitude – bisexuality was hard to find and still harder to find reflected positively.

When the equivalent of grindr and Tinder in the personal adverts of gay press was a 20-word expression of who you were, many things became complex shorthand codes – WLTM (would like to meet), GSOH (good sense of humour), ALAWP (all letters answered with photo) – but it was always worth spending a full two words to make one thing clear: ‘no bisexuals’.

Pink Paper captioned a front page photo ‘Pam St Clements, who described herself as bisexual’: a gay or lesbian celebrity would have simply been noted as ‘lesbian’ or ‘gay’, whereas the legitimacy of bi identity was up for question. Similarly, Diva or g3 would feature ‘What’s On’ listings for lesbian groups but not those for bi women.

Bi press, therefore, was also a response to bi censure in the gay press: from a lack of reporting in the news pages through to the biphobia in the personal adverts at the back. Only the bi press would list local bi groups – and in fact, BCN’'s listings are the best record we now have of the trail of local bisexual organising around the UK.

Due to the demographics of the bi community, bi press tended to be much more female-voiced than the gay press and had far more representation of the gender diversity in the LGBT communities. These demographics correspond with research by the Williams Institute, that while the majority of LGB people are bisexual, women are substantially more likely than men to identify as bi rather than gay/lesbian.

When the magazine started, BCN had a raft of sister publications around the world. However, due to the growth of social media and online news, by 2010, this had reduced to a handful – principally BiJou in Germany, and Bi Women in the USA.

Many bi websites have sprung up as web equivalents to BCN; some like Raspberry Mousse or Bi Social Network have since closed, others like ShyBis/ShyBiGuys are still active after more than a decade. 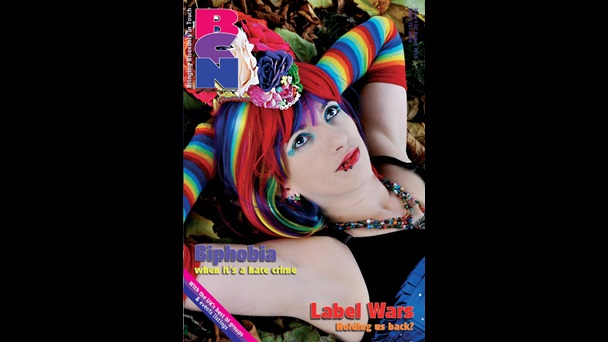