The first encounters of the Pacific by explorers such as Captain James Cook and Joseph Banks opened Europeans' eyes to a rich new world. Dr Philip Hatfield recalls this age of discovery as told through the topographical collections of the British Library.

In his will Sir Joseph Banks (1743–1820) – President of the Royal Society, land owner and companion to Captain James Cook on his voyage around the world between 1768 and 1771 – left an unparalleled collection of print and manuscript works to the British public. The heart of this collection was views and notes produced by Sir Joseph and his team of artists and collectors during their expedition to the Pacific on Captain Cook’s Endeavour expedition. Captain Cook was tasked to sail to Tahiti in order to monitor the Transit of Venus (3 June 1769) before continuing his journey to survey a large portion of the southern Pacific in the hope of finding the Great Southern Continent. Cook never believed this continent existed and was to be proved right, but the islands and landmasses they did encounter would reshape the European view of the world; not least because of the collections and accounts brought home by Sir Joseph Banks.

An Animal Found on the Coast of New Holland called Kangaroo 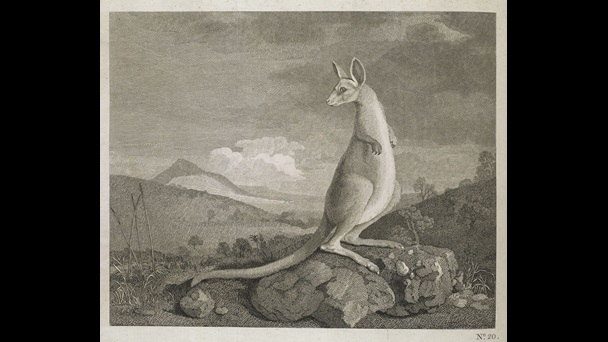 The earliest depiction of a kangaroo in European art was commissioned by Joseph Banks after returning from the Endeavour expedition.

Before journeying to Tahiti, Banks was already noted for his enthusiastic enquiry into the natural world and the success of his previous expeditions. Earlier in his life he sailed with Captain Constantine Phipps to Newfoundland and Labrador in order to conduct research there, and it was his reputation built from such work that recommended him to accompany Cook’s expedition. The expedition also cemented Banks’ interest in travel and uncovering knowledge about the world beyond England.

When Captain Cook and his crew were instructed to observe the transit of Venus from Tahiti, Banks emerged from a crowded field of men suggested to accompany him. Banks’ great wealth was perhaps a factor; he was able to self-fund not only his presence on the expedition but also that of the artists, servants and even dogs that accompanied him. This retinue consisted of artists, such as Alexander Buchan and Sydney Parkinson; botanists, such as Daniel Solander; and was later supplemented with indigenous experts, most notably Tupaia, a Tahitian priest with extensive knowledge of local Pacific geography and an ability to communicate across Pacific Island dialects. His resources also allowed Banks to bring with him all the collecting equipment and books that he needed; a substantial library travelled with him and some of this, including Carl Linnaeus’s Systema Naturae (1758/59), survives in the British Library today.

Cook’s first expedition to the Pacific covered a huge area of the globe in order to reach its goals of conducting research in Tahiti and searching for the Great Southern Land. In so doing it visited Tahiti, New Zealand and eastern Australia, the places commonly associated with the expedition, as well as places such as Tenerife, Brazil, Tierra del Fuego, and Jakarta. This provided Banks and the men accompanying him with a tremendous opportunity to study the geography, botany, zoology, ethnography and material culture of these areas and their approach meant these places were researched in a way few places had been studied before. Banks and his men took with them new methods, collecting samples and recording the landscape systematically and rigorously, with a view to creating a record of enquiry that would be of use to scholars in various fields.

'Endeavour' off the Coast of Tierra del Fuego 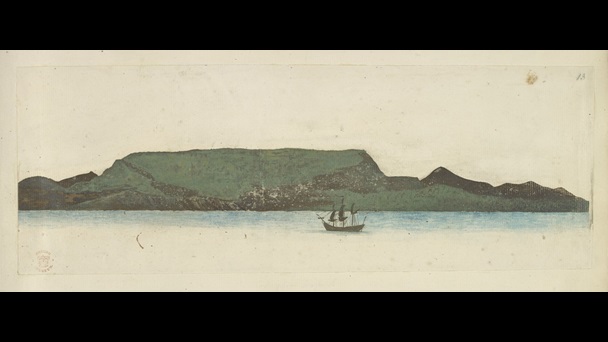 This view was produced by Alexander Buchan after the first sighting of Tierra del Fuego by the Endeavour crew in January 1769.

As a result, Banks returned with a unique view of the world, one that would open the eyes of growing European empires to the variety of landscapes, flora, fauna and peoples to be encountered on the far side of the world. The way this was communicated was fundamentally topographical, in the broadest definition of the term, with maps, views and written descriptions illustrating the places, peoples and fauna encountered by the Endeavour team. Dramatic encounters with foreign peoples in exotic landscapes were nothing new to Europeans; accounts depicting such contacts had been popularly published since de Bruy’s plates of the inhabitants of Virginia, but the scale and scope of the collection Banks returned with amazed scholars, journalists and politicians alike. These were foreign worlds seen on an unimaginable scale.

This is best illustrated through Banks’ botanical collections. The plants Banks encountered, especially in Australia, often challenged the systems of classification being used by Europeans and provided new commercial opportunities for the British Empire, Banks’ encounter with Breadfruit being a notable example. The maps and topographical views resulting from his journey also amazed viewers. The artists who accompanied Banks, Alexander Buchan and Sydney Parkinson, captured diverse views of the locations visited by Cook and his crew. Intended for dispassionate, rational viewing but often with hints of Romanticism showing through, Parkinson, in particular, depicted worlds previously unseen by British audiences with Tahiti and the Pacific Islands being offered as particularly Edenic landscapes.

Banks and his team also recorded in detail the material culture of the cultures they encountered. Illustrations depicted religious and practical items from South America, the Pacific Islands, New Zealand and Australia, creating a fascinating record of the culture of various indigenous groups at point of contact. What Banks also captured was how indigenous peoples viewed and used various parts of the land and sea differently from the European group he travelled with. This can be seen in the depictions of religious structures in Tahiti but is particularly evident in a passage added to Banks’ manuscript journal:

In our return to the boat we saw the Indians amuse or exercise themselves in a manner truly surprising. It was in a place where the shore was not guarded by the reef … consequently a high surf fell upon the shore, a more dreadful one I have not seen: no European boat could have landed in it and I think no European who had … got into [it] could possibly have saved his life … In the midst of these breakers 10 or 12 Indians were swimming who whenever a surf broke near them divd [sic] under it with infinite ease, rising up on the other side; but their chief amusement was carried on by the stern of an old canoe, with this before them they swam out as far as the outermost breach, then one or two would get into it and opposing the blunt end to the breaking wave were hurried in with incredible swiftness.

This is the first European description of surfing and it marks a moment where Pacific Islander culture began a process of slowly seeping into western culture over the succeeding centuries. What to a European was dangerous and threatening is to islanders a source of amusement because of the different way they use and relate to the seascape. Banks’ notes and the illustrations which accompany them are full of insights into how these communities related differently to the lands and seas around them and their viewing in the UK caused a sensation, as well as a seeping of Pacific Island culture into Britain. 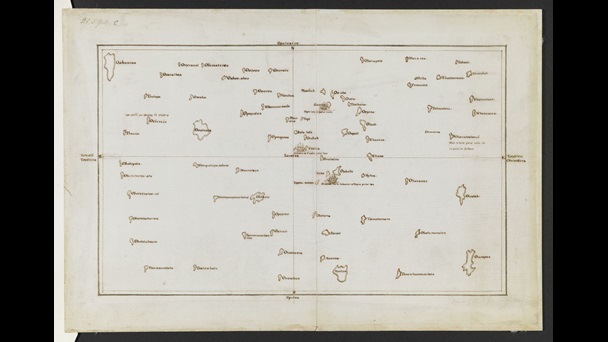 A copy by James Cook of a map by the Tahitian navigator and priest, Tupaia.

One final area where this different way of viewing the world is well illustrated is through indigenous mapping collected by Banks from his companion Tupaia. Tupaia was a priest Banks met on Tahiti who took to the expedition and its crew before travelling on with Banks as his intermediary and factotum. Tupaia produced numerous records for Banks, one of the most interesting being this map of the islands surrounding Tahiti. To European eyes the map is difficult to read as it works on a different logic to our cartographic practices. Scale is not judged by distance but by usual sailing time, a factor affected not just by the space between two points but by prevailing currents and wind that can be encountered on the journey. As such, the way of viewing the sea and its islands provided by Tupaia is markedly different from that which was constructed by Cook and his crew during their surveys of the area.

Ever the collector, Banks preserved these manuscripts, maps and illustrations in his Soho Square library upon his return. During Banks’ lifetime they were extensively used by scholars and researchers from around the world, many of whom visited London solely to make use of his collections. As a result, Banks’ collections from the Endeavour expedition framed how Europeans saw and related to the Pacific world, viewing its landscapes and cultural difference through a lens provided by the industry of Banks, his men and indigenous persons such as Tupaia. By providing this resource, Banks, in turn, changed how people understood the world around them. 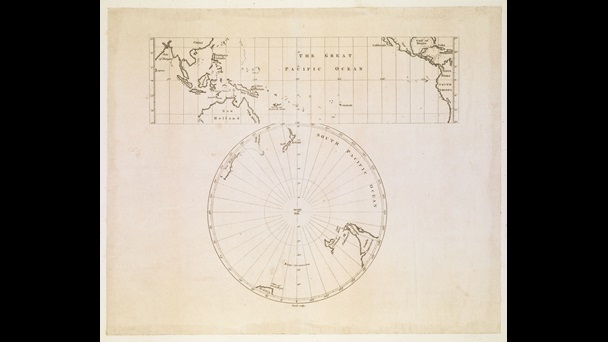 Banks bequeathed the majority of his collection to the British Museum on his death and today this material is spread between the British Library, British Museum and Natural History Museum. The landscapes, seascapes and peoples depicted by Banks and those travelling with him continue to influence our understanding of the pre-contact Pacific Island world. More significantly, however, they also provide an invaluable repository of indigenous knowledge and ways of seeing the world – much of it otherwise lost through the processes of colonialism which resulted from the exploration of Cook and other expedition leaders. As such, the diligent collecting Banks’ materials represent are a living record for those who wish to connect to the historic landscapes, cultures and ways of seeing of the Pacific Islands.