Early topographical views of Cork emphasised its connection to the sea, but this was to change over the course of the 18th century, as Finola O'Kane discovers.

Like many islands, early views of Ireland were frequently taken from the sea. The mariner’s concern for safe passage to a welcoming harbour saw the making of topographical drawings of valuable exactitude. An anonymous artist painted two topographical watercolour views of the harbour in the late 17th century, his position indicated by the two figures he placed carefully in each view to record where he had stood. 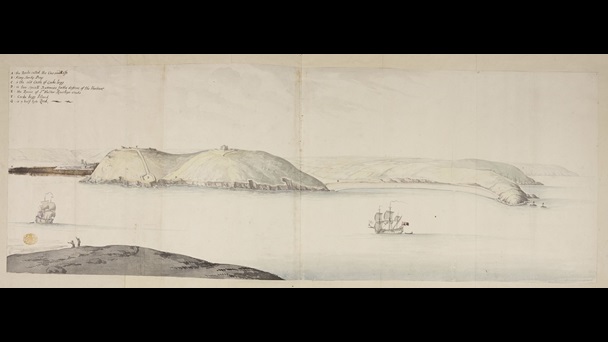 Complex deep harbours, with few sightlines from the point of safe haven to the open sea might require more than one view. Cork harbour is such a landscape. With the city lying concealed behind the harbour’s many inlets, channels, islands and small bays, the provision of a keyed topographical drawing was extremely helpful for those who had not been to Cork before or who did not know the lie of the land well. Elsewhere in Ireland, the long and deep estuary of Lough Foyle made it difficult if not impossible to see Londonderry from the sea and like Cork, its inland position made it attractive as a safe harbour from Atlantic storms.

A prospect of Kilmore Fort 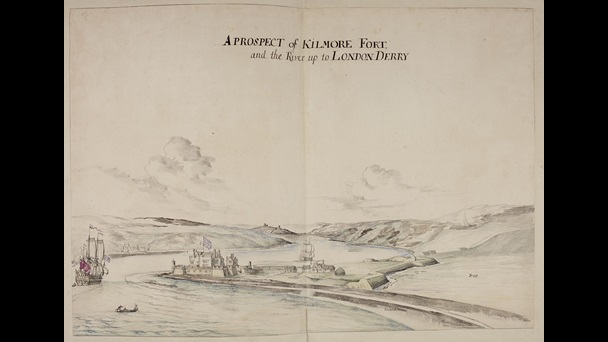 Located downriver from Londonderry, the fort was key to the town's defence.

On the other hand, the city of Galway, the largest port on the wilder west coast of Ireland, proclaimed its allegiance to the sea. A 1690 prospect of Galway from the sea placed the city at its centre. 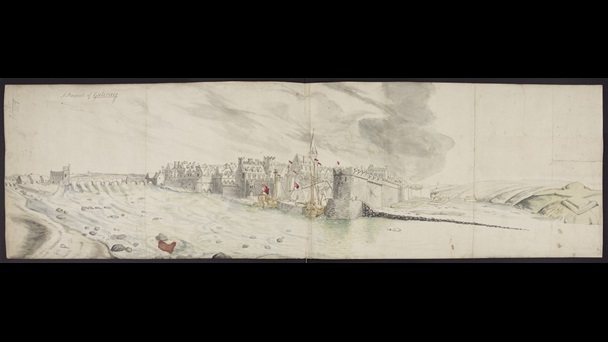 Unlike most Irish towns, Cork is built on a marsh, valuing its close convenience to the sea more than solid ground. Laid out initially like a Dutch city with canals instead of streets, these were replaced over time, yet its character as a city wreathed with water remains. Lying low, the River Lee split and streamed around it, and although Cork has been an important Irish trading and military port for much of its existence, the city itself has no view of the open sea, its maritime character constantly sensed rather than seen. Most British ships crossing the Atlantic since the 17th century have stopped at the Cove of Cork or Cork itself in order to load the final provisions for the voyage. Cork harbour’s strategic role as a base from which to protect the British trans-Atlantic routes saw its many islands (Haulbowline, Spike, Rocky, Little island) pressed into service as British Navy installations. One of the three deep-water ports retained by Britain under the Treaty of 1922, it was transferred to the Irish defence forces in 1938. Identifying the islands was initially helpful for understanding the lie of the land. It was also strategically important as islands midstream control both the channels and the lines of view.

‘A View in the entrance of Cork harbour 9. A’ (above) was probably taken from the hill above the batteries marked D in ‘A View in the entrance of Cork harbour 9. B’. It shows the eastern coastline of the harbour with a lengthy legend to pick out such topographical features as ‘the Rocks called the Cow and Kalfe (A)’, ‘a larg[e] Sandy Bay’ (B), ‘the old Castle of Corke Begg’ (C), the batterys (D), the remains of ‘Sr Water Rawleys works’ (E), ‘Corke Begg island’ (F), and ‘a half tyde Rock’ (G), the last important for not running aground during low tide. The combined firepower of the various batterys, one a hexagon, the others more geometrically nondescript, could together be turned on the enemy at the narrowest point of entry to the harbour. Its partner was ‘A View in the entrance of Cork harbour 9. B’, probably taken from the hill above the battery marked D in ‘A View in the entrance of Cork harbour 9. A’, or possibly from E ‘Ruins of Sr Water Rawleys works’. The carefully drawn ships dot the safe channel of entry to Cork city as they veer right around Spike island at B and then Haulbowline Island at A, avoiding the large areas of sand, also marked, where they could run aground at low tide. Spike and Haulbowline islands became the British Navy’s principal bases in the south of Ireland, gradually accommodating a large fort, substantial shipyards and barrack buildings and a penal colony. As islands, they were easier to defend and, for the Navy, access was not a problem. C marks the location of the fishing village of Crosshaven and the battery at D subsequently evolved into Camden Fort. Both these views describe Cork's complex fractal coastline that creates a wealth of small bays, rounded headlands, concealed beaches and hidden landing places. Some of the south west coast’s historic attraction for both seditious landings (such as that attempted by the French Navy under General Hoche in Bantry Bay in 1796) and for smuggling arose from this seemingly endless, yet accessible, coastline.

A view of the Bay of Bantry 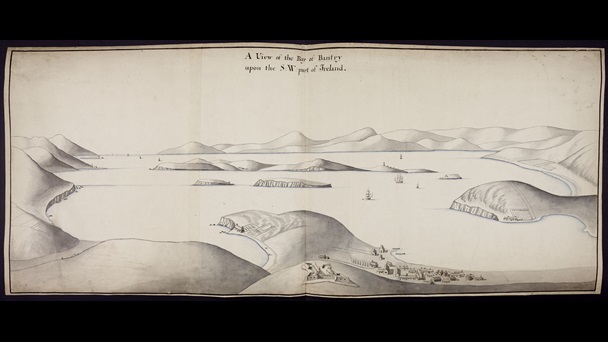 The bay in southwest Ireland, drawn by Thomas Phillips, about 1680-90.

Other landscapes were too wild, exposed and uninviting to tempt many landings. The small dark figures that dot the lower left hand corner of a view of Dunmanus Bay climb energetically rather than point at the view, and the great forts and warships that dot other early 18th-century Irish views are replaced by a lone single-sailed boat, moving casually through the bay to no clear destination.

A prospect of Dunmanus Bay 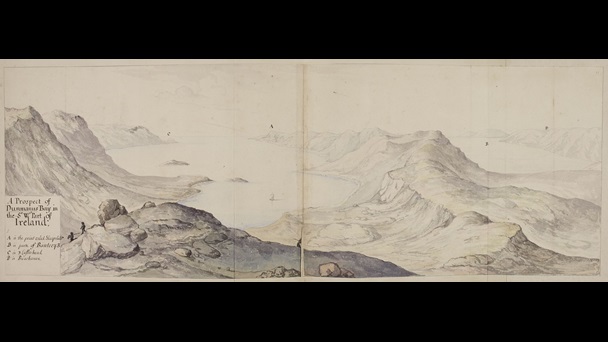 Routes change over time, and a city’s form and fabric may be affected by the rise and fall of such routes. Approaching a city by road or by foot creates a very different perception to an approach by ship. By the end of the 18th century views of Cork were not always so maritime in focus. Ireland’s tourist routes were growing in popularity with Cork a starting point for many tours destined for Killarney (Kerry’s geography left it free of large ports) and the ever more picturesque Cork hinterland. Cork’s landscapes, as the late-18th-century traveller Arthur Young described them, ‘opened to view in noble reaches of a magnitude that fills the eye and the imagination: a whole country of a character truly magnificent.’[1] Rowing into the belly of the harbour and ‘landlocked on every side’ he delighted in the harbour's ‘chearful circumstances of lively commerce’.[2] Young also described the Cork Estuary’s compositional balance of foreground and middle ground, shifting screens of trees and the careful positioning of great houses and villas. Thomas Sautelle Roberts’ view of Cork is taken from the high ridge that runs parallel to the river above the town to the north. 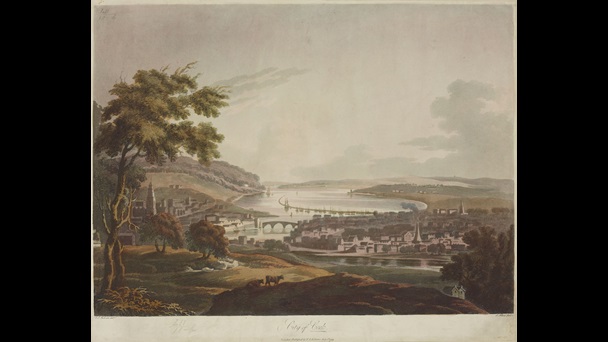 A viewed from the north side of the river by Thomas Sautelle Roberts, 1 July 1799.

Many of Cork’s merchant princes had chosen to build their villas along this ridge to allow for great, plunging views of town, river and harbour. The spire of Shandon rises beside the requisite tree to the left hand side while the long tail of boats and ships leads from the city out into the harbour connecting Cork with the wider Atlantic world.