Maps are often perceived as objective or ‘truthful’ representations of geographical data. In this article, Damian Walford Davies shows how they can also be vehicles for artistic or imaginative content, symbols, political agendas and cultural messages.

Most of us conceive of a map as truth – an inscription of the world ‘out there’ as we know it, an object of authority (underpinned by trigonometric and GPS accuracy) that allows the reader to become a mobile wayfarer and to know, and thus master, the land.

The etymology of the terms ‘cartography’ and ‘map’ refers us back to the material – a piece of cloth – on which representations of the physical world were once inscribed. In this regard, as Wystan Curnow reminds us, the terms ‘belong to the vocabulary of writing cultures’. This should give us pause for thought. A map is a cultural object – a symbolic representation of the world, not the world itself; it is a system of signs, not the physical objects those signs summon in a complex act of imaginative substitution. 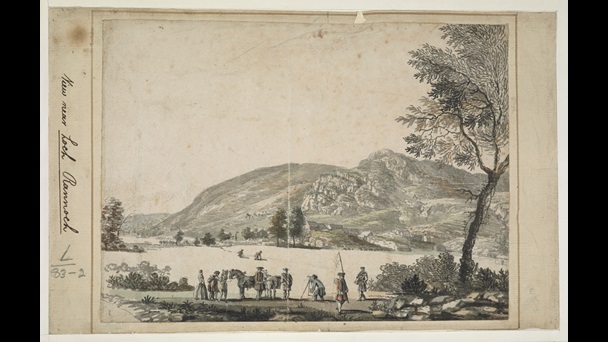 Paul Sandby's portrait of the Scottish Military Survey at work

Scale and ‘accuracy’ are not the issue here, but rather the very nature of cultural signs and the networks of power in which they signify. Developing a teasing concept he took from Lewis Carroll, the Argentine writer Jorge Luis Borges imagined in one of his fables a map of such exactitude that it is the precise size of the territory it represents (and literally covers). We are down the rabbit hole here (as we always are, reading a map): this empire-sized chart, at a scale of a mile to a mile, remains a symbolic representation of the topography it overlays; at the same time, as Carroll had pointed out, the distinction between map and land collapses at such a scale, and one might as well take the land itself as its own ‘map'.

A map is an uncanny object. Most of us have viewed a map – in paper form, or on the screen of one’s smartphone or SatNav – in front of the very landscape it claims to represent, and have felt the cartographic thrill of recognising the correspondence between text and topography while simultaneously sensing the purely symbolic status of that text and the gap between its visual rhetoric and the ground beneath one’s feet. 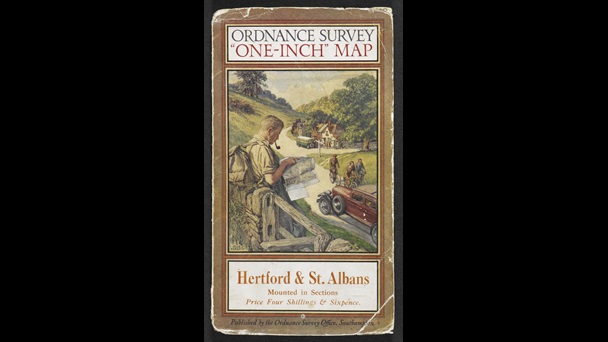 This map was published as part of the Ordnance Survey's popular ‘one-inch to a mile’ series, featuring specially designed covers by Ellis Martin

David Matless has pointed out how in the 1920s and 1930s, Ellis Martin designed cover images for the new ‘Popular’ and ‘Tourist’ Ordnance Survey publications that displayed maps ‘in the hands of a user invariably stationed on a hill overlooking a valley, a prospect embodying principles of both order and revelation’. The message trumpeted by such an illustration is that ‘Unfolding the map unfolds the territory’. Martin’s images identified the map as the very key to a landscape – a text that, curiously, had priority over the ‘actual’, three-dimensional landscape through which one was moving.

On one view, the map becomes a tyrannical simulacrum of the real, smoothing out our world into two-dimensional space, parcelling it into symbols one must learn to read, transforming local particularities into legible universal abstractions.

The late 1980s saw what has become known as a ‘spatial turn’, as cultural geography and social theory came together to explore the ways in which ‘space’ is constructed by culture. It was at this moment that the cartographic historian J. B. Harley began to unpick – or deconstruct – the map (and with it, his previous scholarly interventions) by reorientating the map as a ‘cultural text’ whose effects depend on a semantic code or ‘tropography, where previously scholars had found only measurement and topography’, as he put it.

What Harley did was free up the map from an assumed transparency and ‘mimetic bondage’ with the external world, revealing it to be a ‘social actor’ carrying ‘subliminal geometries’ that reinforce – and in turn recreate – the ‘social structures’ in whose service the map operates. Maps could thus be seen as instruments of state power, working alongside legal and educational codes as ‘staged’ entities – regulatory framings of space that governed citizens’ experience of the world.

A new map of England & France: the French Invasion 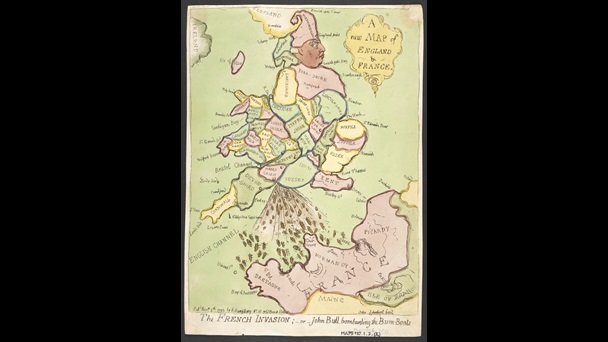 In this cartoon map, George III is personified as the British mainland defecating on France

The formal genesis of the Ordnance Survey – the great national mapping project of Britain and Ireland – at the end of the 18th century is intimately related to the State’s political anxieties: it was the will to know and record, the better to defend, the topography of the realm that prompted a military survey of England’s south coast by the Board of Ordnance.

As Harley recognised, his deconstruction of the map also invited brighter, less suspicious responses to this newly configured cultural object. The move away from unthinking faith in the Enlightenment, rationalist credentials of cartography allowed us to see maps as what William J. Smyth calls ‘“accents” or “dialects” within a wider framework of representation’. Further, a map became legible as an artistic object with seductive affective properties and graphic effects – a text whose verbal-visual rhetoric is engaged in fascinating ‘play’ through various strategies of omission, selection, smoothing, distortion and thematisation. And one could relish how a map does away with a third dimension only to stimulate an imaginative recreation of it.

All of this brought the map closer than ever before to the ways in which a literary text works. One could now start speaking with justification of a ‘literature’ as well as a ‘language’ of maps. While positivist cartographers (and those who simply wanted to know the way) might lament the loss of the map’s assumed scientific correspondence with the world – its ‘innocence’ (as Christian Jacob has it) – Hartley knew he was delivering cartography into a fascinating future in which one could be forever sceptical of maps’ claims to authority while savouring their interpretative challenges and their designs on us. 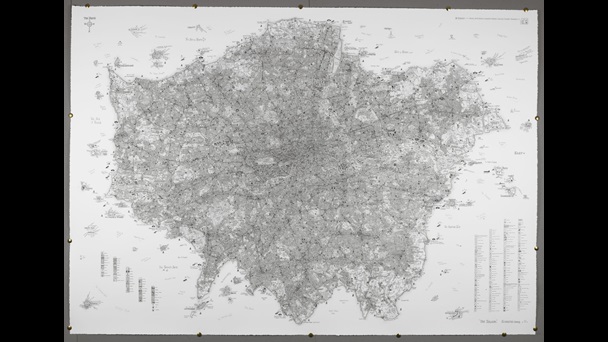 Recognising the inherent fictiveness of maps holds out another invitation. This is to counter-map the world. To resist official maps’ fixing of space and their propaganda allows a user to create one’s own, localist, subjective redrawings or repossessions of territory; this approach can capture one’s individual ‘livings’ and contest established boundaries and authorised demarcations of space. In what ways, for example, might the reader of this article choose to map his/her world in ways that bring out the emotional geographies of life within a changing human depth of field, as opposed to the flattening views-from-above that official maps usually entail? 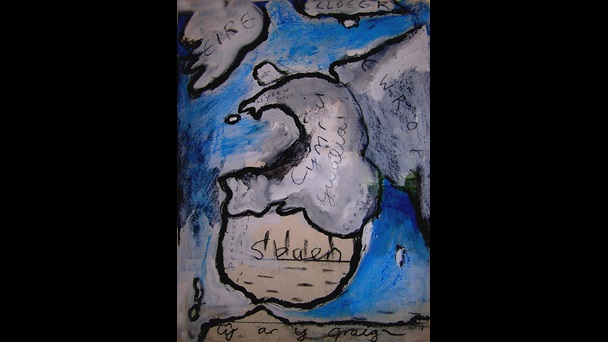 The potential for bracingly defamiliarised – though again, inescapably ideological and politicised – representations of the world is obvious; it is no surprise that counter-mapping has appealed to visual artists keen to articulate world views that run counter to geographical or political orthodoxies.

The work of the Welsh artist Iwan Bala is a case in point: his Cymru Ewropa (‘Europa Wales’, 2005) offers a revisionary map of Europe, an imaginative rebordering that gives (fictive) cartographic embodiment to historical and cultural connections between Wales – here provocatively disconnected from its powerful neighbour England (‘Lloegr’, mostly out of the frame) – and Europe. Maps that claim territorial authority conceal their own erasures; this map confidently advertises what is left out. One might suggest that the image was a response to Eurocrats’ effacement of Wales from the map gracing the cover of the Eurostat Yearbook of 2004.

The elision (no persuasive technical explanation was forthcoming) caused a furore, prompting a debate about ideological ‘airbrushing’, political ‘oversight’ and the use of Wales merely as a ‘unit of measurement’ (as in that now-standard pseudo-geomorphic formula, ‘an area so many times the size of Wales’). Commentators at the time found themselves caught between the literal and metaphorical as they wrestled with the question of how to put Wales (back) on the map.

The omission of Wales also involved a Eurostat spokesman in an entertaining analysis of what the Eurostat Yearbook map did and did not represent: ‘I don’t think there are any fjords, for instance, and some of the Mediterranean islands are probably missing, although I must admit the whole of Ireland is there’ (down the rabbit hole again).

Iwan Bala’s image resonates anew, of course, in the wake of the Brexit vote of June 2016: it is now legible as wishful cartographic and political thinking – a counterfactual map that registers the artist’s lament over the British (and Welsh) electorate’s decision to secede from the European Union.

We are all cartographers now. Digital technology has made maps, of various kinds, at various scales, central to the way we navigate and conceptualise our world on both local and global levels. Cartographic thinking – what one might call the cartographic imagination – is at the heart of intellectual and creative enquiry across the sciences, social sciences and humanities. Maps are part of our spatial toolkit. Yet, they need to be understood for what they are – the products of particular acts of spatial ordering that are usually in the service of certain social, economic and political agendas. Being able to read maps both critically and imaginatively becomes the precondition of one’s ability not only to resist their representations, but also to rewrite them.