The scribes and illuminators of pre-Renaissance England usually found it unnecessary in serving their subject matter or their patrons’ requirements to introduce into their work pictures of actual places and buildings. Only here and there is it possible to pick out examples which can qualify as genuine topography. One of the most delightful is found in the margins of the 14th-century Luttrell Psalter. It shows a thatched watermill of timber and brick built beside a dammed stream. The carefully executed detail – the boss-headed posts of the dam, the five-spoked wheel, the basketwork eel traps set in the stream – makes it reasonable to suppose that the picture represents Sir Geoffrey Luttrell’s own watermill at Irnham in Lincolnshire. 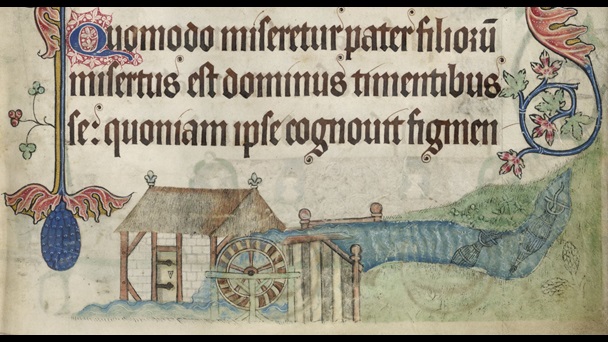 An early example of topographical art, from the celebrated Luttrell Psalter. This is a depiction of Irnham Mill.

The 13th-century monk of St Albans, Matthew Paris, embellished his pictorial itineraries with thumbnail sketches of towns passed along the way. Marking the overnight stops on a journey to Rome and Apulia are views of London (seen from the north), Rochester, Canterbury, Dover, and on into France and Italy. Although the form is mostly conventional – standard city walls and towers of an ideogrammatic type used from classical times – one or two of the buildings are almost recognisable. London, for instance, includes old St Paul’s with its set of three high windows in the tower and smaller windows above, and with the tall steeple which was eventually to be destroyed by fire in 1561.

Itinerary from London to Beauvais 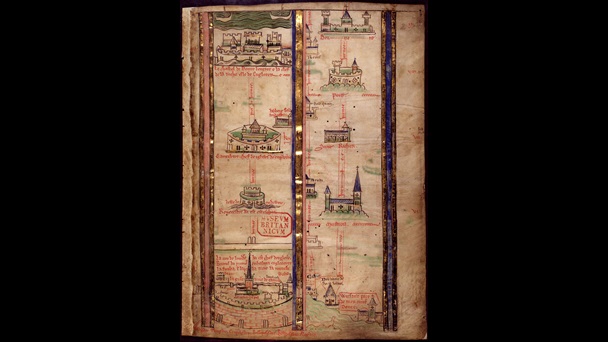 Recognisable buildings, such as St Paul's Cathedral, are a feature of Matthew Paris' 14th-century Itinerary from London to the Holy Land.

Like Matthew Paris’ view, the London of the well-known White Tower miniature in the royal collection (below) is presented from a bird’s eye viewpoint. But whereas the modern observer might be hard-pressed to identify the landmarks of Matthew Paris’ London were they not helpfully labelled, there is no mistaking the architectural features of the later drawing. Allowing for some liberties taken with the appearance of the White Tower to accommodate the figure of the prisoner Charles of Orleans, and for a certain distortion in the geography of the River Thames, the artist has concocted a fairly accurate picture of the City. From Traitor’s Gate and the Tower we look across the Pool of London with the Custom House on the right to London Bridge and St Paul’s beyond. In its competence and its detail it confirms that Italian improvements of the mid-15th century in the technique of aerial views and picture mapping soon reached Northern Europe. Recent scholarship has shown that this remarkable miniature was made not as previously supposed for Henry VII, but for the Yorkist monarch Edward IV in the early 1480s. 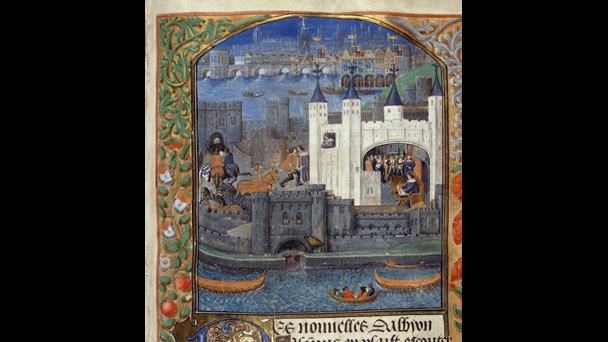 An instantly recognisable scene from a book of poetry by the captive Charles of Orléans.

Such bird’s eye views highlight the early and lasting link between topographical and cartographical drawing. Another early influence which was to remain important was the contribution to topography of the heralds. In the middle of a heraldic roll pedigree made in about 1463 to celebrate the Earldom of Salisbury, appears a building which purports to be Bisham Priory in Berkshire. The Priory has now gone and no ground plan is known. It is impossible to be certain therefore whether the artist is here attempting to depict a real building and not something invented by his imagination. The inclusion of the carving of the Holy Trinity to which Bisham was dedicated and the tracery of the east window do however suggest that he may have intended a real portrait. William Smith’s Particuler Description of England (1588) (below) is another important work by a herald containing maps and topographical views of many English towns and cities, often using a bird’s-eye perspective. 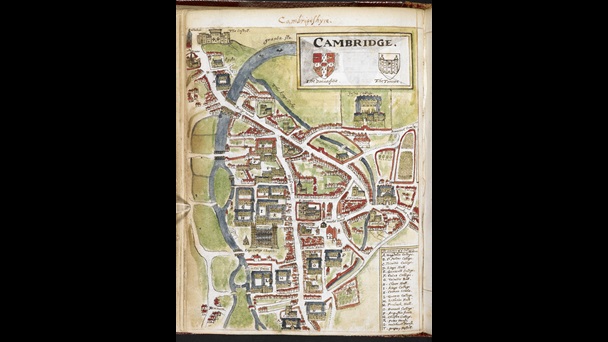 William Smith was a sixteenth-century herald whose contribution to early topography included the plans and panoramas included in his 'Particuler Description of England' (1588).

By the end of the 15th century evidence of heraldic involvement is clearer. The duties of heralds in connection with arms, genealogies and ceremonial gave them a natural interest in antiquarian matters and in compiling pictorial records. Among the most active in amassing such records was Thomas Wriothesley, Garter King of Arms from 1505 to 1534. A volume of his notes and drawings relating to funerals includes what appear to be the oldest surviving drawings to show not just coats of arms but the tombs, monuments and stained-glass windows which formed their settings. The earliest tomb depicted in the volume is that of Richard Beauchamp, Lord St Amand, who died in 1508 (below). Like the other tombs in the manuscript, this one has not survived. Nevertheless, there seems little doubt that Wriothesley’s drawing of the altar tomb with its elaborate late Gothic canopy was copied directly from the monument itself where it stood in the London church of the Dominicans. 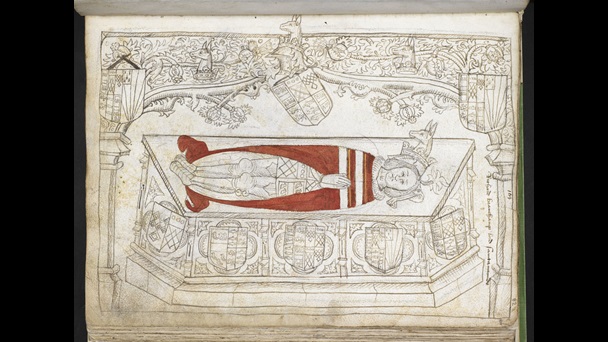 The tomb of Richard Beauchamp in the no-longer extant Church of the Dominicans, London.

Heralds gave a further impetus to antiquarian and topographical studies by the system of Visitations which operated in England between 1530 and 1686. Kings of Arms or their deputies carried out countrywide heraldic surveys whose main purpose was to regulate the use of arms – ‘to correct, deface and take away all manner of arms wrongfully borne or being false armory’. To this end they added to the pedigrees recorded in their Visitation notebooks, sketches and records of church monuments and inscriptions as evidence of use. The ‘Church Notes’ of these heralds on their journeys up and down the country remain a valuable topographical source.