Fred Smith takes a close look at a unique copy of Myles Coverdale’s New Testament, examining an ink drawing of Windsor Castle that may or may not have been painted by a young Edward VI.

With something like a thrill we must record that probably the very germ and protoplasm of landscape art in Britain sprang from a king, and took form and shape in the very national heart of all the kingdom. Somewhere about the year 1550 the son and heir to King Henry VIII, afterwards King Edward VI (1537–1553), sat down in Windsor Park and drew and coloured a view of the Castle.[1] 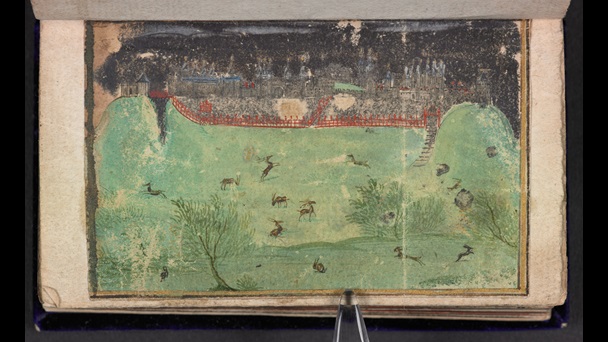 Pasted into the flyleaf of a tiny sextodecimo edition of Myles Coverdale’s (1488–1569) 1538 New Testament, the small coloured ink drawing of Windsor Castle that provoked this excited response from Maurice Harold Grant in 1957 has since failed to attract much attention. Grant’s suggestion that this image represents the first stirring of British landscape art has been universally ignored. Meanwhile, his attribution of the drawing to Edward VI has not received endorsement from any subsequent historians of the ill-fated English king.[2] In fact, for the past fifty years, both this drawing and the New Testament bible in which it is contained have lain almost untouched in the collections of the British Library (General Reference Collection C.45.a.13.).[3] This article takes a closer look at the Windsor drawing in order to paint a more detailed picture of its provenance and interrogate for the first time the possibility that Edward VI could have been its author. 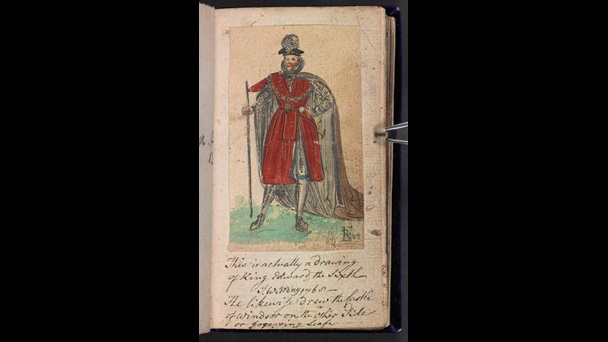 Coloured ink drawing depicting a knight of the garter.

Grant’s suggestion that the Windsor drawing was authored by Edward VI is based upon an 18th century manuscript note written onto the next folio of the same Coverdale New Testament bible. Beneath another coloured ink drawing depicting a knight of the Garter we read, ‘This is actually a drawing of King Edward the Sixth…He likewise drew the Castle of Windsor on the other side of foregoing leafe’.[4] This note is signed and dated, ‘I. W. May, 1768’. Without any indication as to who this ‘I. W.’ was, or where he learned of these drawings’ provenance, there is little to recommend his attribution. Nevertheless, the possibility that Edward could have been the author of both the Windsor Castle drawing and the picture of the knight is intriguing.

Edward may well have had access to the Coverdale bible into which both these drawings were pasted. On folio 4 (verso), a quatrain has been written onto the flyleaf:

Among good thinges
I prove and finde, the quiet
life doth muche abounde,
and sure to the contentid
mynde, ther is no riches
may be founde. 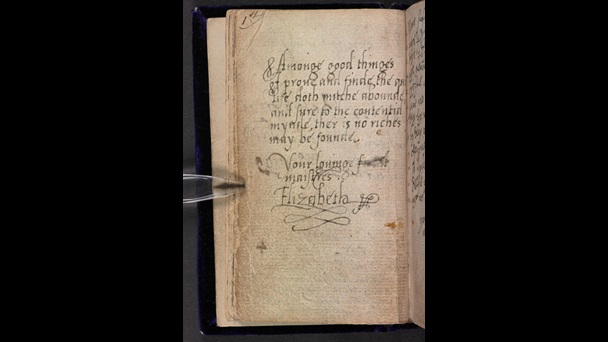 Both the hand and signature reveal this ‘Elizabeth’ to have been none other than Edward’s older sister, Elizabeth Tudor: the lack of the usual ‘R[egina]’ following her name suggests that it was written before she became queen, either in the 1540s or 1550s.[5] Her poem appears to have been addressed to one of her ladies in waiting, Anne Poyntz, who subsequently composed a response on the facing folio, suggesting that Elizabeth may have given the bible to Poyntz as a gift. 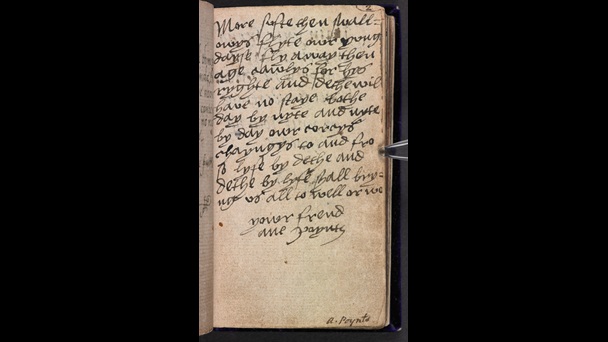 This small book was therefore owned by at least one member of the Tudor dynasty. Did Elizabeth originally receive the bible from her younger brother, who personalised it with two of his own sketches? It is certainly a possibility. The two siblings were close, and there is evidence that they exchanged gifts on at least one other occasion. In May 1549, Elizabeth had sent the young king her own portrait. In an accompanying letter, she beseeched her brother ‘that when you shall look on my picture you will witsafe to think that as you have but the outward shadow of the body afore you, so my inward mind wisheth that the body itself were oftener in your presence’.[6]

The idea that Edward could have authored these drawings finds further support in their subject matter. Although Edward passed relatively little time at Windsor, he spent a prolonged period there on at least one occasion. Fearing unrest in the capital, Protector Somerset had conveyed the young king to Windsor for his safety in October 1549.[7] Having spent some days confined to the castle and its grounds, Edward reportedly likened it to a prison, complaining: ‘here be no galleries nor no gardens to walke in’.[8] Perhaps he took to drawing the castle to divert his attention?

Edward also took an interest in the Order of the Garter. Around 1550 he helped redraft the order’s statutes in line with his own Protestant beliefs. He prescribed a new oath committing the knights to protect the monarch, fight the forces of the ‘bishop of Rome’ (i.e. the papacy), and defend the realm against all heresies.[9] It is even possible that the drawing in the Coverdale bible commemorates a particular event in the order’s history which caught Edward’s imagination. In the chronicle he kept between 1547 and 1552, Edward noted the investiture of the French King, Henri II (1519–1559), with the Order of the Garter in 1551, as well as his subsequent receipt of the order’s chain and cloak.[10] It may be more than a coincidence, then, that the knight in the drawing bears a passing resemblance to the French King. 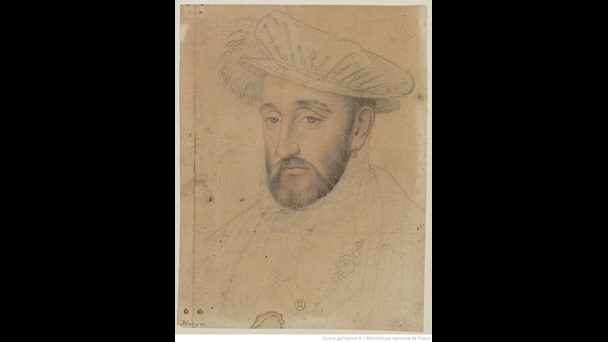 Drawing of King Henri II of France, made by Françoise Clouet in 1553.

Neither the subject matter of these two drawings nor the provenance of the Coverdale bible in which they are found therefore mitigate the possibility of Edward’s authorship. However, it remains unclear whether the young king possessed the technical skill with which to execute them.

Throughout the late medieval period, drawing and painting were widely regarded as mechanical skills, unfit for gentlemen, and certainly not for princes. However, by the early 16th century such views were beginning to change. The Italian nobleman, Baldassare Castiglione’s (1478–1529) famous 1528 work, Il Cortegiano, delineated at length the qualities and activities that were fit for a Renaissance gentleman. As Katherine Coombs has explained, ‘For Castiglione the arts were an important branch of learning, and he formulated an argument against the rhetorical and social norm that the arts of drawing, painting and sculpture were not liberal arts but merely mechanic’.[11] Although Castiglione’s work was not translated into English until 1561, Edward was educated by individuals who had considerable knowledge of, and great respect for, Italian Renaissance culture.[12] Furthermore, regardless of whether Edward’s tutors knew of Il Cortegiano, they would certainly have had access to another work, partly based upon Castiglione’s ideas: Sir Thomas Elyot’s (c. 1490–1546), Boke Named The Governour.[13] 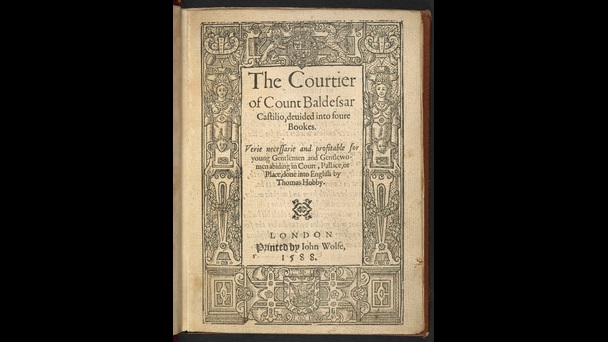 Il Libro del Cortegiano by Count Baldassare Castiglione (1478–1529) provides a fascinating insight into Renaissance court life, and was the ultimate ‘how to’ guide for aspiring courtiers.

Published in 1531, and dedicated to King Henry VIII (1491–1547), The Governour was principally intended as a guide for educating princes and other young men destined to be members of the governing class. Following Castiglione’s lead, Elyot advocated the teaching of drawing and painting to young princes. Though he admitted that some might criticise him for attempting to ‘make of a prince or noble mannes sonne a commune painter or kerver’, Elyot nevertheless insisted that:

If the childe be of nature inclined (as many have ben) to paint with a penne, or to fourme images in stone or tree: he shulde nat be therefrom withdrawen, or nature be rebuked, which is to hym benivolent: but puttyng one to hym, whiche is in that crafte…moste excellent, in vacant tymes from other more serious lernynge, he shulde be in the moste pure wise enstructed in painting or kervinge.[14]

Elyot’s work went through at least five editions between 1531 and 1553, and it seems likely that its ideas influenced Edward’s tutors. They certainly appear to have followed his advice with regards to music, a skill which Elyot recommended alongside drawing as a something beneficial ‘for the refreshynge of [the] witte’.[15] A number of observers noted Edward’s proficiency at the lute, and he seems to have received tuition from the Netherlandish lutenist Philip van der Wilder, who served as a member of his privy chamber.[16]

Overall, therefore, the suggestion that the two drawings in C.45.a.13. were authored by Edward VI is not as implausible as at first it might appear. Not only did the young prince potentially have access to the copy of the Coverdale bible in which the pictures were pasted, but he may well have been possessed of the skill and inclination to draw them. If Edward were the author, these small drawings would represent important new evidence for the spread and implementation of Italian ideas regarding princely education in 16th century England. Meanwhile, the image of the castle would represent the earliest surviving depiction of Windsor and, as Grant suggested, one of the earliest English landscape drawings.[17]

Nevertheless, for a number of reasons the attribution of these drawings to Edward VI must remain improbable. Most importantly, there is some evidence that these drawings may be copies of prints created several decades after Edward’s death. The picture of Windsor is almost identical to a view of the castle incorporated into the background of Marcus Gheeraerts’s (c. 1520/21, d. in or after 1586) ‘Procession of the Knights of the Garter’, published in 1576. The depictions of the Garter knights in this print also bear some resemblance to the drawing of the knight in the bible. Although it is possible that Gheeraerts may himself have seen and copied the bible images, it seems far more likely that they were copied from Gheeraerts’s print, meaning that Edward, who died in 1553, could not have been their author.

Procession of the Knights of the Garter View of Windsor, bearing a striking similarity to the drawing in the Coverdale bible, in the background of Gheeraets’s ‘Procession of the Knights of the Garter’.

Although far less sensational, such a conclusion raises some intriguing questions. Where and when did the myth of Edward’s authorship originate? Was it a fabrication of one of the 18th century owners, eager to create a more exciting provenance for one of their collection items? Certainly one of these owners seems to have been eager to associate the bible as firmly as possible with the English monarchy: on one of the first flyleaves a small printed image of King Charles I (1600–49), cut from an early 17th century book, has been inserted. Further research into the later owners of the bible might shed some light on these questions. However, in the meantime, the authorship and date of the bible drawings must remain a mystery.

[4] By ‘this is actually a drawing of King Edward’, the writer of the note seems to have been implying ‘by’. The knight, depicted with a beard, is clearly too old to have been Edward VI, who died at the age of fifteen. This reading is also affirmed by a manuscript note, in the same hand, on the first flyleaf.

[6] Lean S. Marcus, Janel Mueller, and Mary Beth Rose, (eds.), Elizabeth I: Collected Works (Chicago, 2000), p. 35. On the relationship between them, see Carole Levin, ‘Sister-Subject/Sister-Queen: Elizabeth I among her Siblings’, in Naomi J. Miller and Naomi Yavneh (eds.), Sibling Relations and Gender in the Early Modern World: Sisters, Brothers and Others (Aldershot, 2006), pp. 77–88.

[15] Ibid., fol. 23v. The fact that no formal record of the young prince being taught or encouraged to draw survives is hardly surprising. As Elyot stressed, although skills in painting and drawing could be taught to young princes, ‘yet shall they nat be by him exercised, but as a secrete pastime, or recreation of the wittes late occupied in serious studies’: ibid., fol. 27r.

[17] Currently, the earliest representation of Windsor is thought to date to ca. 1568. See https://www.rct.uk/collection/912936/windsor-castle-seen-from-the-north-with-figures-in-the-foreground