John Spyers is best known for his association with the landscape gardener 'Capability' Brown, but his independent role as a topographical artist has received little attention, as Tom Drysdale explains.

John Spyers was a surveyor and draughtsman who for nearly 20 years worked as an assistant to Lancelot ‘Capability’ Brown, the leading figure of the 18th-century landscape garden movement. However, it was his second career as a topographical artist that brought him his crowning achievement, in the form of the creation and sale in around 1778 of 150 drawings, chiefly of Hampton Court and Bushy Park, to the Empress of Russia, Catherine the Great. The rediscovery of the two Hampton Court albums in the stores of the State Hermitage Museum, St Petersburg in the early 2000s, and their display in an exhibition at Hampton Court Palace in 2016, has generated new interest in Spyers, although in general he is still defined by his association with Brown.[1] Examples of his work in the King’s Topographical Collection at the British Library, however, speak of Spyers’ development as an aspiring local artist in the period following his career with Brown. 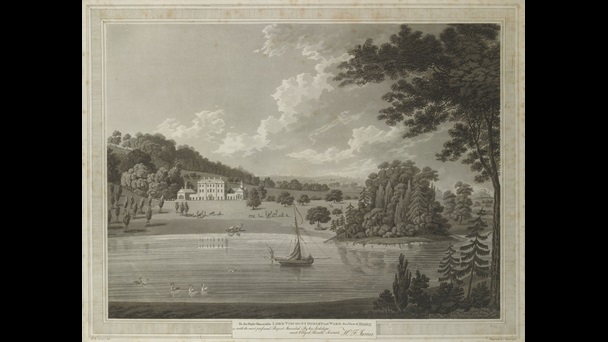 ‘Capability’ Brown remodeled the gardens at Himley Hall in Staffordshire in the 1770s.

John Spyers was born into a family of nurserymen (plant sellers) in about 1731.[2] The family business, based in Twickenham, was run by his uncle, Joshua, and John was probably put to work there himself. As well as supplying plants, the Spyers business also offered additional services, for on 12 June 1750 ‘Mr Spyers’ received £2.2s.0d. from Horace Walpole for a survey and plan of the Strawberry Hill estate.[3] It may be that this work was delegated to John, since such tasks were often performed by the more junior members of nursery staff.

Spyers began working for Brown in 1764 at Tottenham Park, Wiltshire, where ‘Mr Brown’s surveyor’ is recorded as spending 24 days making plans and surveys. Over the next 15–20 years he would assist Brown at several more estates, primarily drawing up measured surveys and designs to visualise Brown’s ideas.[4] In 1768, John inherited Grosvenor House, and it was still in his possession in 1784 when it was included in a survey of Twickenham by Samuel Lewis.[5] However, David Jacques notes that Spyers and his family were based at Hampton Court Palace from 1771 and, according to his obituary, it was in his apartments there that John Spyers died on 31 December 1798, aged 67.

Spyers seems to have developed a particular interest in topographical art around the time that his association with Brown was coming to an end in the late 1770s. He was already in his 40s by this point, and there is some debate around his motivation for making such a move. On the one hand, his self-improvement as an artist seems to have been a priority, while a certain financial imperative no doubt also acted as an incentive. Spyers’ development as an artist is likely to have followed the typical model for the 18th century. This involved learning by copying existing works before moving on to drawing from life. The Hampton Court Albums contain two drawings that are copies of works by the Dutch painter Nicolaes Berchem (1620–83) as well as a number of studies of heads after Raphael that may represent this aspect of Spyers’ education.[6] Spyers probably also received some instruction from his brother-in-law, Jacob Bonneau (1717–1786), a landscape artist and tutor to the Royal family.[7]

West Front of the Royal Palace of Hampton Court 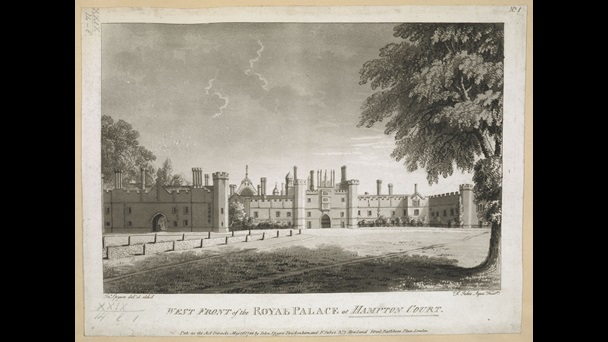 One of six etchings by John Spyers based on the views he had sold to Catherine the Great.

Incredibly, Spyers achieved his greatest success at his first attempt. While they are by no means artistic masterpieces, the watercolours contained in the Hampton Court Albums are now regarded as an invaluable historical source as they provide an almost unique and comprehensive visual survey of the Palace, including rarely-recorded areas such as the service courts, and Bushy Park in the late 18th century. More pertinent for Spyers, though, was their sale for 1,000 roubles to the garden-loving Empress, Catherine the Great. Her purchase from Josiah Wedgwood in 1773–74 of the 944-piece ‘Green Frog’ dinner service, decorated with 1,222 topographical views, was a sign of her enthralment to the English landscape and the country estates of the landed gentry.[8] The albums were made during the time when Brown was the Chief Gardener at Hampton Court, and their valuation was no doubt boosted by this association, although their contents represent Spyers’ separation from Brown more than a continuation of their partnership.[9] Famously Brown’s contract was for the maintenance of the existing, Baroque gardens, and therefore Spyers’ views were probably made as an exercise in self-improvement rather than a professional endeavour.[10] Six of the views were, however, published as aquatints by Francis Jukes in 1786 as a commercial venture – a full set can be found in the King’s Topographical Collection.

Spyers’ transformation into an artist in the 1780s has been largely treated as an addendum to his career as Brown’s surveyor. However, this was a significant and interesting period of his life, during which he produced in excess of 40 works (a number that has been significantly increased through recent research), branched out into printmaking and exhibited on no fewer than three occasions at the Royal Academy.[11] Spyers’ artistic output after the sale of the Hampton Court Albums shows his continuing technical improvement, but more substantially points to his local bias as well as his increasingly commercial approach to his work.

Four aquatints in the King’s Topographical Collection are from a set of seven seemingly related views of noble houses in Twickenham, Isleworth and Richmond that were produced by Spyers after the sale of the Hampton Court Albums. These were printed by John Wells and published on 1 July 1784 by William Dickinson of New Bond Street. Another drawn view in the King’s collection is connected to the other prints by its composition and subject matter, but no printed examples have been found.[12] In addition, a related print and a drawing from the same series are not in the King’s collection. The properties shown in the views are those of the local nobility: Sir Edward Walpole (Lacy House), Lady Diana Beauclerk (Little Marble Hill), the Duke of Montrose (Twickenham Park), Lord Poulett (Poulett Lodge), Sir Charles Asgill (Asgill House), Col. Stewart, and the exception – Stephen Cole, a brewer and neighbour of Spyers at Heatham House. Interestingly, at least two of the prints were reprinted in 1796 with different titles reflecting the houses’ new ownership, displaying Spyers’ commercial sensibility.[13] An unrelated view of Richmond Hill from Twickenham Meadow, also in the King’s collection, was printed by Wells after a drawing by Spyers, probably around the same time.[14]

A View of Sir Edward Walpoles House at Isleworth 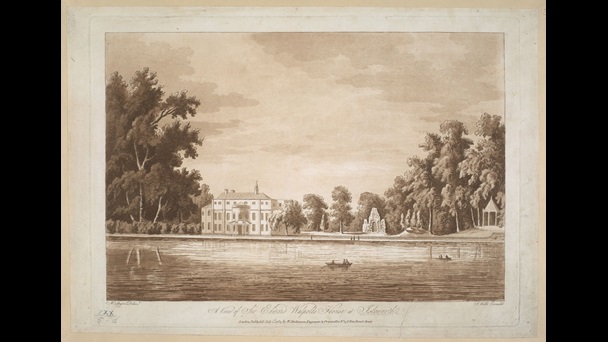 A second series of views of gentlemen’s houses in the Twickenham area appeared in 1786. Four coloured prints published by Francis Jukes have been identified, with impressions in both landscape and oval vignette format. They show the houses of Captain Davis (Alpha House), Paul Whitehead (Colne Lodge) and Benjamin Bradbury (Brinsworth House) on Twickenham Common, and that of John Robinson of Sion Hill.[15] Jacques regards these as a small scale undertaking, perhaps intended for Spyers’ circle of friends.[16] However, the houses each occupied a prominent location on the Common, which was then a large public amenity with a well-stocked fish pond, and were visible from the river, while their occupants were recognisable public figures, and so the prints are likely to have appealed to a wider audience. 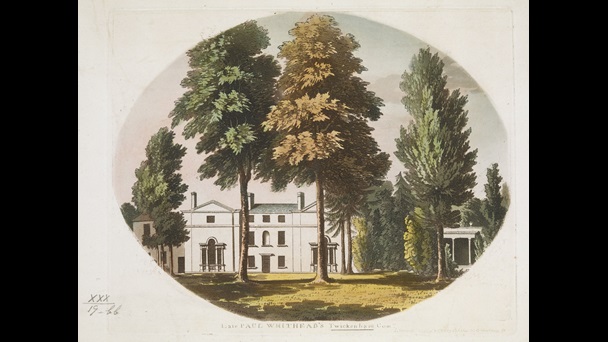 One of four views of gentlemen's houses by John Spyers.

A more obviously commercial endeavour was the production of six views of Hampton Court in aquatint after Spyers’ original drawings that were also published by Jukes on 26 May 1786. Notably these prints were etched by Spyers himself, demonstrating his continuing self-improvement, although he omitted the elongated staffage (people) seen in his earlier drawings, and the titles of two of the views are incorrect. They were created in all likelihood for the emerging tourist market, and are perhaps the most commonly encountered of Spyers’ works today.[17]

Another set of drawings produced in 1786 shows Spyers capitalising on a connection formed through his work with Brown.[18] These are a series of 11 drawings of Fisherwick, Brickley Lodge and Hopwas Hayes in Staffordshire, commissioned by the Earl of Donegall, one of Brown’s former patrons. These drawings are more accomplished than those in the Hampton Court Albums. Notably the figures are much more animated and well-drawn than those in the Hampton Court views, whilst the View of the Cascade in the Garden in particular displays very good handling of depth and tonality.

View of the Cascade in the Garden 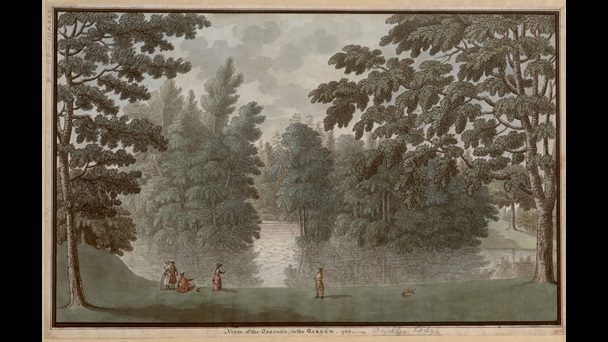 Spyers' view of the cascade at Brickley Lodge is one of his finest watercolours.

A number of other undated drawings exist, many of them missing from the recent literature on Spyers but most confirming the description of Spyers as a well-connected, local artist catering to a select clientele. Among them is a view of The Royal Observatory in Richmond Garden, now in the British Library’s King’s Topographical Collection, which provides a rare view of a piece of private, Royal property – Richmond Gardens, another Brown landscape – shortly after the construction of the observatory built by William Chambers for George III in 1768.[19] It was here that the King observed the transit of Venus in 1769 and later kept his collection of scientific instruments and clocks. The appearance of Spyers’ drawing within the King’s collection adds another layer of interest – perhaps it was a personal gift from the artist to the monarch. In any case, the view is another example of Spyers' independent role as a topographical artist, which deserves to be better known.

The Royal Observatory in Richmond Garden 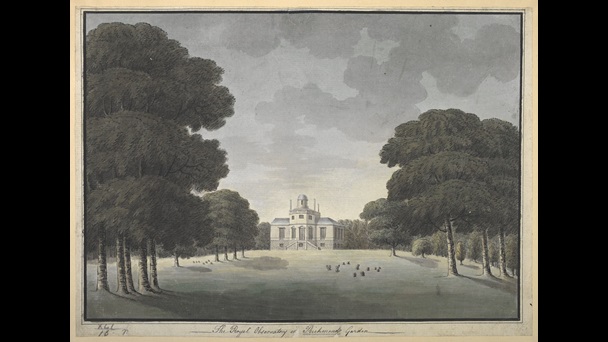 A rare early view of the King's observatory.

[2] Biographical details in the following paragraph are from D. Jacques, ‘John Spyers, Capability Brown’s Draughtsman and Surveyor, and his Views of Hampton Court’, in Dedinkin and Jacques, The Hampton Court Albums, pp. 23–31.

[5] E. Ironside, The History and Antiquities of Twickenham; being the first part of parochial collections for the County of Middlesex (1797).

[11] The 40+ views do not include the Hampton Court drawings or any of the surveys and views made by Spyers in his capacity as Brown’s surveyor.