The small line drawing at BL Maps K.Top.45.11.c. is one of many objects in the King’s Topographical Collection that invite us to think differently about topography. There are no buildings or natural landmarks, nothing at all topographical in the familiar sense, as relating to a landscape view, prospect or map. It does, however, invoke a particular place: 10 feet below the ground in Micklegate, York. On that spot in 1747, workmen discovered an old stone carving, later identified as a relief sculpture, or ‘basso relievo’, from the 2nd or 3rd century CE representing the Roman god Mithras killing a bull.

Mithras sacrificing at the vernal equinox 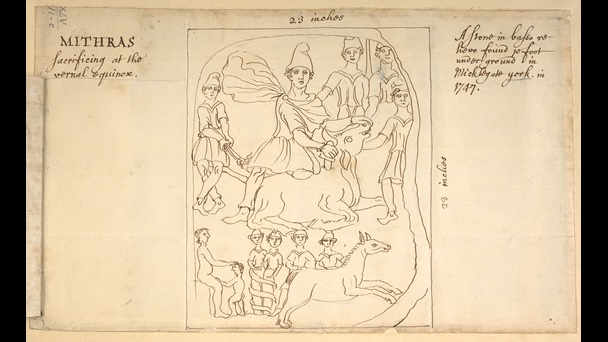 A sketch of a limestone relief depicting Mithras sacrificing a bull, discovered in 1747.

The subject of the relief was first identified by the renowned antiquary William Stukeley, who made the drawing shortly after the limestone carving was discovered during routine excavations for building work. Stukeley knew that the area around Micklegate, south of the River Ouse, lay within the colonia, or main settlement, of Eboracum (the Roman name for York). He also knew that the rites and rituals associated with the cult of Mithras were especially popular among soldiers during the time of the Roman occupation of Britain, and that they were usually celebrated in a cave or underground temple. This last detail helped Stukeley to explain the unusual depth at which the stone relief was found.

In the drawing, Mithras pins a bull to the ground with his knee. He holds the animal’s nose with one hand as he thrusts a sword into its neck with the other. The Roman god is surrounded by four attendants, each wearing a tunic and a Phrygian cap (a distinctive felt hat associated with Mithras and his followers). In the lower part of the drawing are other curiously arranged figures, including a single horse galloping towards the edge of the picture. Stukeley’s explanation of the carving was published by the Royal Society in 1749, together with an engraving based on his drawing.[1] A few years later, he published a more detailed account, with a new engraving, as part of a larger antiquarian project he called Palæographia Britannica: or, discourses on antiquities that relate to the history of Britain.[2] Through these publications, and others inspired by them, Stukeley’s interpretation of the Micklegate relief made a significant contribution to the rediscovery, and reimagining, of Eboracum as the northernmost provincial capital of the Roman Empire. With each retelling, the relief became more deeply embedded in the history and mythology of the city in which it was found. 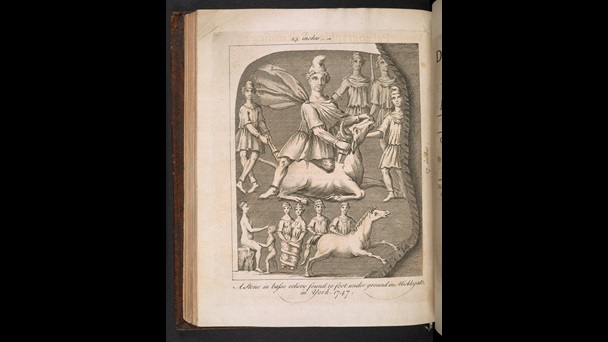 This engraved frontispiece to Stukeley’s Palæographia Britannica provides another, more detailed interpretation of the Micklegate carving.

One 18th-century reader inspired by Stukeley’s account was John Burton, a well-known physician and fellow antiquary who lived in Micklegate, close to where the carving had been found (he is buried there too, at Holy Trinity Church). Burton is best known for writing an influential book on midwifery, and for his study of the early church in York. Towards the end of his life, his antiquarian interests extended to include the history of horseracing. Although horses had been raced in one form or another for longer than anyone could remember, the modern sport as we know it, with organised races between specially bred horses, was beginning to take shape in the early decades of the 18th century. The racecourse at York was established on its current site a mile or so to the south of Micklegate (following the route of the old Roman road) in 1731, and by the 1760s it had begun to rival Newmarket as the venue with the most prestigious meetings and the best prizes. Burton called on Stukeley’s detailed account of the Mithras carving, and its accompanying image, as powerful evidence that races had been held in the city during the time of the Roman occupation.[3] From this, he concluded that York was the first home of the horseracing in Britain. Today, the ancient origins of the sport are invoked in the name of the oldest and most lucrative event in the York racing calendar, the Ebor Handicap.

Burton also used his local knowledge to update the story of the stone’s discovery and subsequent movements. He tells us, for example, that it was found during excavations for the cellars and foundations of new houses ‘since built by Mr. Benson’ which lay ‘almost opposite to St Martin’s Church, but a little nearer the River Ouse’, and that by 1769 it was in the possession of Edward Sandercock. Later sources reveal that the carving was bequeathed by Sandercock’s widow to the York physician Robert Cappe.[4] It was then displayed in the library of York Minster before becoming part of the collection of the Yorkshire Philosophical Society. In 1829, the Society built the Yorkshire Museum, where the Micklegate Mithras is now displayed alongside later remnants of Roman York, including a head of the emperor Constantine and a magnificent statue of Mars, the god of war. 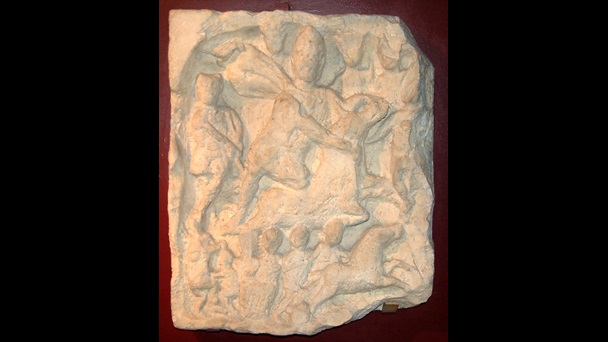 The briefest comparison between Stukeley’s line drawing and the carving in the Yorkshire Museum reveals the extent to which Stukeley drew on his extensive knowledge of Roman mythology and religion, as well as his imagination, to compensate for the lack of detail caused by centuries of erosion. He gave the figures faces, and delineated their gestures and clothing. More detail was introduced in the engraving. In preparing the image for publication, the printmaker added shading to the figures and fabrics to convey the three-dimensional nature of the stone, paying particular attention to the form and features of the dying bull and the galloping horse. As one animal suffers a violent death, the other seems to spring to life on the page.

Since the 18th century, several other Mithraic temples have been discovered at various sites across the former Roman empire. The most celebrated example in Britain was discovered by archaeologists beneath Walbrook in the City of London in 1954. A central feature of every Mithraeum is the scene of Mithras killing the bull, known as the tauroctony. Wherever they are found, these carvings are designed with a striking consistency. Mithras always leans on the bull with his left knee, always holding the animal’s nose with his left hand, a sword with his right hand, just as Stukeley described. Other elements of the tauroctony vary. Some carvings include a later episode in the story, when Mithras, having feasted on the meat of the bull, rides through the heavens on the chariot of the Sun god, Sol. Elaborate carvings discovered in France and Germany in the 19th century incorporate earlier moments, including scenes of Mithras hunting and catching the sacrificial bull. It is likely that the horse in the lower part of the Micklegate relief also relates to one of these other episodes. It is possible, even, that it was not intended to represent a horse at all.

Stukeley’s drawing may not reveal the origins of racing in Roman York, but it tells us a great deal about our desire to locate the past. More broadly, when encountered in the context of the King’s Topographical Collection, the drawing invites us to think about time as an essential attribute of topography. The accretions of time are more visible in the urban fabric of York than in many towns and cities. The famous wall and gates that circumscribe the city are a composite of medieval, 18th-century and Victorian inventions, built on Roman foundations, all now a part of the distinctive modern fabric of the city. Stukeley’s drawing registers a similar layering of time—a literal and metaphorical digging over the same ground. The Romans and the races remain among York’s most popular visitor attractions, and Micklegate is still a thriving street (especially on race days), known locally for its bookshops, cafes and nightlife. With the coming of the railway, the site of Mr Benson’s houses, where Roman soldiers once celebrated the mysteries of Mithras below ground, was redeveloped as a hotel. It is now a nightclub called Popworld, home of York’s only revolving dance floor.

[2] William Stukeley, Palæographia Britannica: or, discourses on antiquities that relate to the history of Britain. Number III (London, 1752).