In the summer of 1270 Louis IX, king of France, sailed across the Mediterranean on crusade to Tunis. On the way the ships of his fleet were scattered in a storm and the king asked his ship's officers how far they were from Cagliari in Sardinia. The chronicler Guillaume de Nangis, writing in Latin, tells how they thereupon brought a mappa mundi on which they showed him Cagliari and the area of the coast near to where they lay. This mappa mundi can hardly have been one of the contemporary world maps; in fact it is the earliest known reference to a portolan chart. The earliest surviving portolan chart dates from some 20 or 30 years later; it is known as the carte pisane because it was thought to have come from a family archive at Pisa. Some thirty portolan charts survive from the 14th century and about 150 from the 15th. 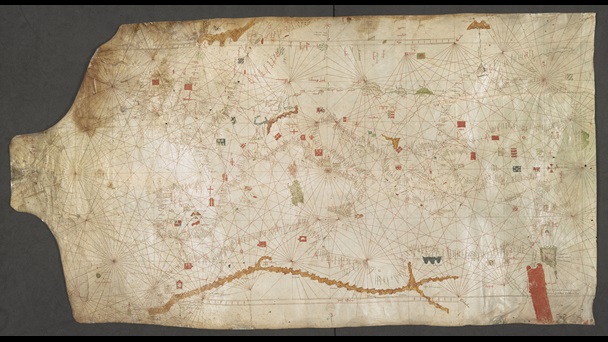 This mid-14th-century portolan chart showing a few inland features is in the style associated with Catalan charts.

The basis of every portolan chart is a simple coastal outline of the Mediterranean and the Black Sea, though it might be extended to include the west European coast as far as the British Isles and the North Sea, ultimately even to the Baltic and the west coast of Africa. Essentially it was a sea chart, used in navigation. Few, if any, inland features are shown, the many coastal place-names are written on the land side of the coastline so as not to obscure possible danger points, and prominent headlands may be slightly exaggerated. A distinctive feature is the network of so-called rhumb lines that cover the map. At first sight they seem almost arbitrarily drawn but in fact they conform to a careful pattern. 16 equidistant points, among them the four cardinal points, would be marked along the circumference of a large notional circle; actual lines then joined (and extended beyond) all these points. Sometimes the basic circle is actually drawn on the map and sometimes there are two circles, not one – both are the case on the carte pisane.

Map in the margin of Dati, The Sphere 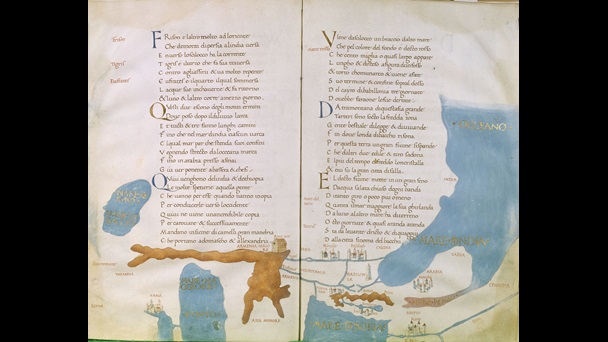 This map decorating manuscripts of Dati's poem The Sphere shows the Mediterranean, Cairo, Syria and Mesopotamia.

The word portolano is Italian and means written sailing directions. The earliest medieval compilation of this sort that we have for the Mediterranean dates from the mid-13th century. But despite the coincidence of dates there is nothing to suggest that portolan charts were directly connected with this or any other portolano; the term portolan chart is a modern invention and unnecessary confusion has been caused by sometimes calling them simply portolans. Certainly the portolan charts we know from the 14th and 15th centuries are independent of the written portolani – most are unattached to any text. Some are drawn on single sheets of parchment, others form small books or atlases, each page covering a different area.

It is clear from contemporary writers – Guillaume de Nangis among them – that portolan charts were taken to sea and were regarded as practical aids to navigation, perhaps with the help of dividers. But just how they were used is far from clear. Surviving charts betray no obvious traces of use in this way and they may have served mostly as a simple aide-mémoire, a handy guide to the features of coasts that were seldom out of sight for long on Mediterranean voyages. On the other hand some portolan charts were what we might call library copies, perhaps drawn with this in mind and never meant to be taken to sea. These must be disproportionately represented among portolan charts surviving today. Apart from suffering less wear and tear than one would expect on board ship they will have been more ornate and thus more likely to be kept.

No less mysterious than how it was used is how the portolan chart originated. Much research and learned debate has done little to solve this problem and the fullest recent discussion reaches no firm conclusion. We can be fairly sure that portolan charts were already being made in the 12th century, but we cannot rule out the possibility that the portolan charts all stem from a map of classical origin; it may have suddenly come to light or some imaginative person may have grasped the possibilities it presented. It is just possible – but not at all likely – that this map was based on those in Claudius Ptolemy's Geography, otherwise unknown in western Europe until the 15th century; certainly it was unrelated to whatever classical prototype lay behind the Cotton world map, which presents a quite different view of the Mediterranean. Probably, though, the first portolan chart was an entirely new compilation, produced not from astronomical observations and geographical coordinates but simply from carefully measuring, recording and collating the direction and distance of a great many voyages. It is significant that the magnetic compass first appeared in the Mediterranean in the 12th century and came into general use there in the 13th.

Whether they derived from a new map or from a classical model, the earliest portolan charts were rapidly improved through observation and experience. We see this happening quite dramatically in the way the British Isles are shown on 14th-century charts. By the 1320s the simple rectangle that represented Britain on the carte pisane had developed into a more recognisable shape and Ireland had been added beside it. But this was an outlying area, likely to be corrected at a late stage; the finer adjustments that we see being made in the Mediterranean outline over the same period may be no more than the last stage in a process that, starting from a crude beginning, had produced a tolerably good map by the time the carte pisane first reveals it to us. By then, we should remember, portolan charts had been known for many years.

The early appearance of scale-bars and direction indicators on the portolan charts shows how important the accurate measurement of distance and direction was to those who drew them and to those who used them. The first scale-bars, on early-14th-century charts, are placed within a circle; but before long a simple bar, often at the margin, became normal. It might be thought that no direction indicator was needed beyond the rhumb lines, which always included north-south and east-west alignments, but a miniature compass rose appears on a portolan atlas of 1375 and frequently in portolan charts of the 15th century; the markings on the compass itself may well have derived from the nodal points of the rhumb lines on a chart.

These were not the only changes made on portolan charts in the course of the 14th century. The number of places named along the coasts steadily increases on the earliest charts, but after about 1325 most have some 1100 or 1200 names of which more than a third might vary from one chart to another. These changes may reflect the changing pattern of Mediterranean settlement and commerce, as one little coastal town grew in importance and another declined, but their detailed significance has not been worked out. They can only be an uncertain guide to the chronology of change, for where a particular development can be dated it seldom appears rapidly on a chart and sometimes only after a very long interval. Bilbao, founded about 1300, appears on a chart by 1339; Villefranche, built in 1295, does not replace the site's old name, Olivule, on the charts until the mid-15th century. The same applies to the flags that appear along the coasts on many of the charts to show who held local lordship. A chart of about 1385 is the first to show the English flag with the fleurs-de-lis that were added to it in 1340, and Montpellier, acquired by France from Aragon in 1349, first appears with the French emblems on its flag in 1426.

A portolan chart by Petrus Rosselli 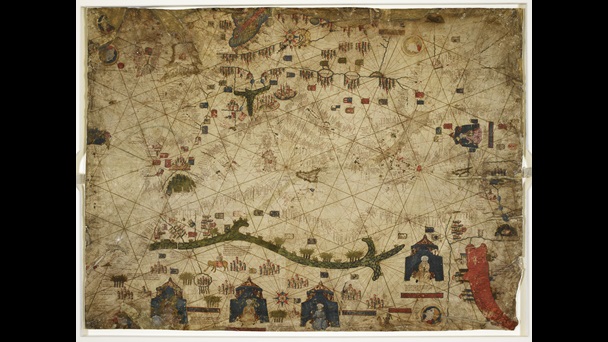 In 1465, Rosselli produced this portolan chart including the main cities and other inland features, among them the Atlas Mountains in north Africa.

Long debate over where the earliest portolan charts were made has produced more heat than light, but those surviving from the first half of the 14th century certainly include charts made at Palma, Genoa and Venice. At this date, where it was made scarcely affected the contents of a chart – all gave more or less the same information and any changes were copied on maps made anywhere. After about 1350, however, the different places of origin developed their own traditions, and it starts to become possible to say where a map was drawn from the particular place-names and other features that it shows. In general style, however, Italian maps can be distinguished earlier than this from Spanish ones. Broadly speaking (there are exceptions) Italian maps showed nothing beyond what was relevant to navigation – coastlines and coastal settlements – while the Catalan ones showed some inland features – rivers and mountains - and were more likely to include vignettes and other decoration.

Most of the early portolan charts are anonymous, but some of the mapmakers can be identified and one deserves special mention – Pietro Vesconte, who came from Genoa but did some, perhaps all, of his work at Venice. His work falls within the period 1310-30; the name Perrino Vesconte, which appears on one atlas and one chart, may be his own, using a diminutive form, or that of another member of his family. Vesconte was one of the few people in Europe before 1400 to see the potential of cartography and to apply its techniques with imagination. 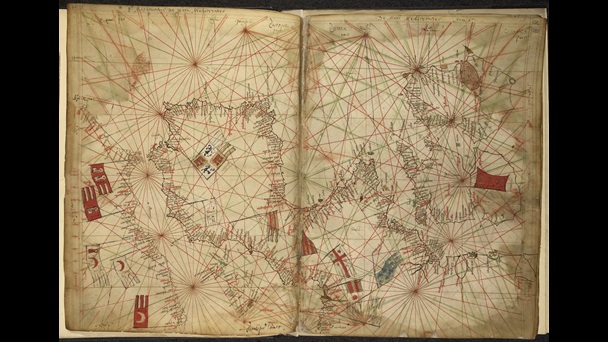 This portolan chart by Pietro Vesconte illustrates the coasts of western Europe followed by Mediterranean ships.

In the world maps he drew around 1320 he introduced the outline of the Mediterranean and Black Sea taken from the portolan charts. We may suspect that his influence lay behind the maps of Italy in the Great Chronology by Paolino Veneto that was copied at Naples not long after, for other maps in the same manuscript are related to maps from Vesconte’s workshop that illustrate Marino Sanudo's book calling for a new crusade. These maps of Italy use the coastal outline from portolan charts as the basis for a general map of the area, showing mountains, rivers and inland towns. It was a precursor of the use of portolan charts in regional mapping.