Realistic views of European towns appear regularly from 1400 onwards as backgrounds to paintings, and in manuscript miniatures, particularly in Flanders and central Italy. The first printed representations appear in the 1470s as simple woodcuts prospects used for book illustration. The earliest known is a view of the city of Cologne – complete with the crane on its then unfinished cathedral – in Werner Rolewink’s world chronicle Fasciculus Temporum of 1474. This work also contains a number of prospects that were the product of the author’s imagination.

Perhaps the earliest printed book in which the topographic contents are significant for their general accuracy is the Peregrinatio in Terram Sanctam (1486). It was compiled by Bernhard von Breydenbach, a wealthy canon of the cathedral at Mainz, who journeyed to the Holy Land in 1483. He was accompanied by the Dutch artist Erhard Reuwich, whose drawings were used to prepare woodblocks of the towns visited en route, including Venice, Rhodes, Candia (Heraklion) and Jerusalem. These illustrations supplemented Breydenbach’s text, which thus became the first illustrated travel book as well as the first book to contain folding plates.

View of Rhodes from Peregrinatio in Terram Sanctam 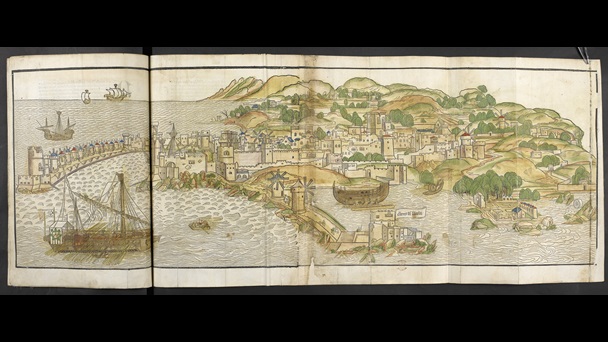 Bernhard von Breydenbach's account of a pilgrimage to the Holy Land contains this view of Rhodes by the Dutch artist Erhard Reuwich.

Another first-hand account containing a folding illustration was the second of six letters written by Hernan Cortés giving his description of the conquest of the Aztec empire in 1521. The 1524 Venice edition contains a woodcut plan-view of the Aztec capital Tenochtitlán which is probably the earliest printed plan of any American city. By 1524, however, the plan had become a valuable historical record, as Cortés had destroyed the original capital to make way for his new foundation, Mexico City. 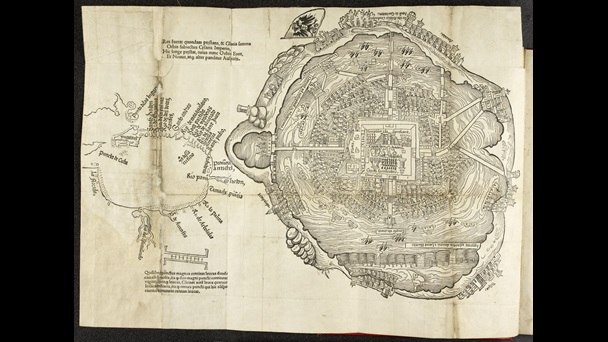 This woodcut contains a chart of the Gulf of Mexico and a plan-view of the Aztec capital Tenochtitlán.

The projects of Breydenbach and Cortés were exceptional in the overall accuracy of the plans and views they contained. Generalised views, taking the form of largely imaginary sketches in which the same woodblock would frequently be used to represent several towns, remained the favoured method of depicting towns until well into the 16th century. The Nuremberg Chronicle of 1493, for example, contained 116 named views of places, of which perhaps less than a quarter approximate to the actual scene. Sebastian Münster also used only a few woodblocks to portray a large number of towns in the first edition of Cosmographia of 1544. The Cosmographia was one of the most influential books of its day, a geographical and historical compendium drawn from many classical and contemporary sources, from the leading humanists of the time, and supplemented by Münster’s own observations during his travels. The publication in 1548 of Johannes Stumpf’s Schweizer Chronik, however, was notable as it carried the first realistic views of Swiss cities, the accuracy of which represented a great advance in geographical illustration.This stimulated Münster to revise his own work and to include substantial improvements in both the quantity and quality of the town views in the 1550 edition of the Cosmographia, thus providing Renaissance scholars with their first comprehensive view of urban Europe. 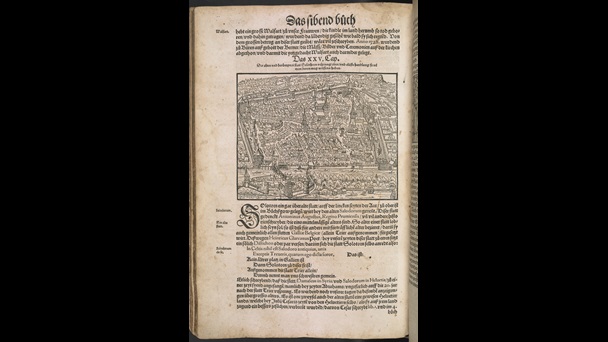 Johannes Stumpf’s Schweizer Chronik was the first printed atlas of Switzerland and contained topographical views like this woodcut of Solothurn.

The European Renaissance witnessed developments in aspects of mathematics and the graphic arts that were to have a direct impact on urban cartography. The science of perspective, advanced through Brunelleschi’s projective geometry of 1425, and Leon Battista Alberti’s method of perspective drawing set out in 1435, led in Italy to the development of the bird’s-eye view. This offered a method of achieving a realistic impression of an urban area from an otherwise unattainable viewpoint. Several such views of Italian cities, including those of Florence and Rome, are known to have been produced in the 1480s and 1490s. The most spectacular, however, was a view of Venice published in 1500. 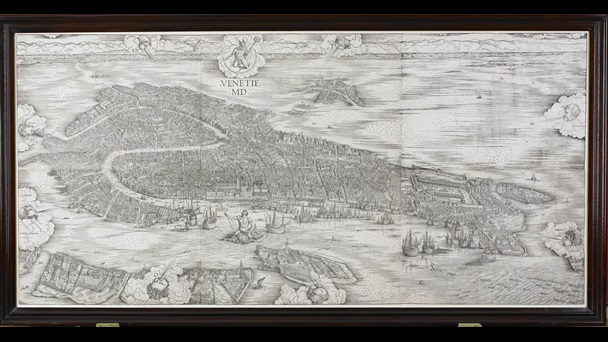 This bird’s eye view by Jacopo de’ Barbari displays Venice at the height of its power.

This work was originally attributed to Albrecht Dürer, and not identified until 1855 as the work of Jacopo de’ Barbari. An itinerant painter born in Venice c. 1450, de’ Barbari was court artist to a number of princes, including the Emperor Maximilian I. The view of Venice was commissioned by a German merchant resident in the city, Anton Kolb, who approached the Venetian government in 1500 for a grant of the sole publishing rights and an exemption from export duties. The view was probably composed in a studio from many separate sketches taken from towers and high buildings. The individual sketches would then have been plotted onto a perspective framework which itself may have been calculated from ground plans of the city similar to those used by the Venetian authorities for the maintenance of roads and canals. The design was cut on six woodblocks which still survive in the Correr Museum, Venice. De’ Barbari’s work epitomised the new heights of realism to which the Renaissance cartographers aspired. At the same time, the symbolic purpose of his work can be deduced from the Latin inscriptions encircling Mercury, hovering above the city, and Neptune, riding a dolphin below. These may be rendered as ‘I, Mercury, shine favourably on this above all other emporia’ and ‘I, Neptune, reside here, smoothing the waters of this port’.

De’ Barbari’s view of Venice was probably the inspiration for the woodcut view of Amsterdam executed in 1544 by Cornelis Anthonisz. This again features Neptune, here positioned high above the city, bearing a trident in his left hand and Amsterdam’s coat of arms in his right. Anthonisz., a topographical illustrator, was of sufficient stature to be taken by the Emperor Charles V on his expedition to Algiers in 1541 to provide a pictorial record. His view of Amsterdam, of which five different editions are known to have been published between 1544 and c. 1640, mirrored the pride he felt for his native city as suggested by the title, ‘De vermaerde Koopstadt van Amstelredam’ (the famous trading city of Amsterdam).

By this time, the bird’s-eye view had evolved as a popular and familiar means of portrayal. A more specialised application of the technique can be seen in the views of battle and sieges produced from about 1490. Antonio Lafreri of Rome published numerous depictions of military campaigns from the mid-1560s onwards. His work also included ‘Le Sette chiese di Roma’ (the seven churches of Rome), which he made for the 1575 papal jubilee. His engraving shows pilgrims progressing between the seven churches on the route, with all other details – apart from the Tiber and the city walls – excluded. 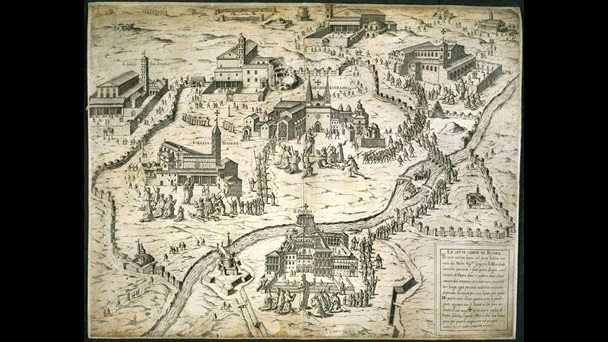 Maps like these guided Catholic pilgrims around churches in Rome and the Eternal City.

Italy also led the way in which the science of fortification and siege warfare: military surveyors produced the first scale plans of Italian towns to be made since Roman times. Leonardo da Vinci’s plan of Imola (c. 1502) pioneered the use of scaled ground plans for military purposes, which became common throughout northern Europe during the first half of the sixteenth century. Military considerations also determined the work of the surveyor Jacob van Deventer, who obtained a commission from Philip II of Spain to produce ground plans to a uniform scale of the walled towns of the Netherlands, some 250 altogether. His work, which began in 1558, continued until 1572, and although his plans were official documents not at first intended for publication, a number of them were engraved on copper to contribute to the variety of cartographic styles found in the pages of Braun and Hogenberg’s Civitates Orbis Terrarum of 1572-1617.

This is an edited version of a text first published in James Elliot, The City in Maps, British Library, 1987.