Richmond and Twickenham: A Modern Arcadia

A royal enclave, an artistic and literary hub, and an elegant suburban retreat, Richmond-upon-Thames was ideal subject matter for 18th and 19th century artists and printmakers. Their depictions of the area are well represented in the King's Topographical Collection, leading Martin Postle to explore why so many made this culturally rich London borough the focus of their work.

Richmond upon Thames is among the most culturally evocative places in the British Isles; for hundreds of years an Arcadian haunt of poets, artists and writers. Richmond’s rise to prominence from the 14th century onwards was linked inextricably to its significance as a location for the Court, as the Manor of Shene was transformed into a Royal palace. In 1501, Shene was renamed Richmond by Henry VII after his home in Yorkshire. As the court became established, so landed estates and hunting grounds were developed and extended, culminating in the 1630s with the enclosure of Richmond Park by Charles I. By the late 17th century, Richmond Hill, overlooking the river Thames, had become the principle vantage point for viewing the surrounding landscape, or ‘prospect’. Prominent artists, included the Italian, Antonio Joli, the Dutch topographer, Leonard Knyff, and the Flemish born, Peter Tillemans, were employed to produce grand vistas and birdseye views from above and across the river Thames. Tillemans, who suffered from asthma, moved to Richmond in 1733 not only to paint but ‘for the Air and his health’.[1] These artists’ paintings were commissioned by aristocrats and courtiers whose houses and estates monopolised the landscape. Indeed, as the artist Ozias Humphry observed, when taking in the view from Richmond Hill, it was not the scenery that impressed him but the prestige of its inhabitants:

‘From this Terrace one looks down upon the Thames, a sublime translucent Mirrour, on the other side of which are the beautiful meadows of Twickenham, judiciously arranged and adorned by Mr Owen Cambridge their Proprietor, in which is situated his Hospitable Mansion. On the Hill near the Park Gate is a villa of the Duke of Ancaster’s and beyond it within the Park the Lodge of Princess Amelia. Under the Hill to the westward, in a rich Dell, is one singularly beautiful of the Duke of Montague. Over this villa are the woods of Petersham, a seat belonging to the Earl of Harrington. Beyond this again are the Earl of Dysart’s Groves at Ham’.[2] 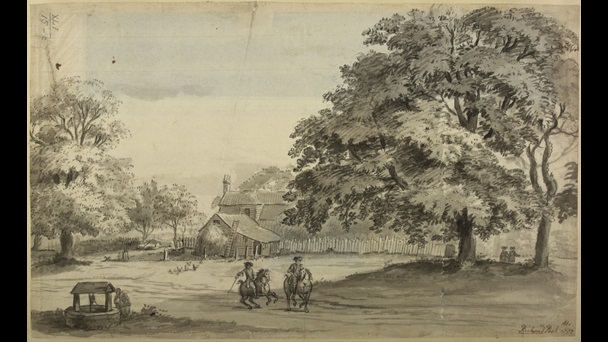 Augustin Heckel, the creator of this drawing, lived on the edge of Richmond Park, at the top of what is now Queen’s Road

By the mid-18th century Richmond had become a mecca for an increasingly broad range of artists and engravers, as a plethora of views not only of Richmond but Twickenham and the surrounding area were produced in response to its increasing fashionability.[3] Prominent among local artists, was Augustin Heckel, a German-born goldsmith who, having retired to Richmond as a wealthy man in 1746, turned his hand to topographical views of the area.[4] Heckel’s detailed drawings, which were engraved during his lifetime and afterwards, provide among the most valuable records of Richmond and Twickenham, including scenes on the river, the hill, and in the collection of the British Library the nearby royal deer park. The presence of two soldiers on horseback in the foreground of Heckel’s drawing serves as a reminder that the park was Crown land and, although the public had right of access, the park was contested terrain, Charles I having erected a wall around it in order to reinforce his authority and keep commoners at bay.

A view of Lady Diana Beauclerk's house in Twickenham Meadows 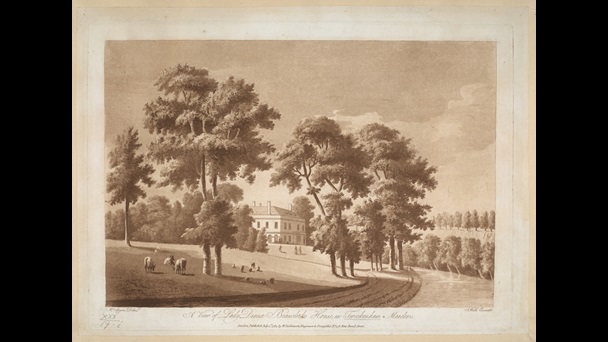 Described by Horace Walpole as a ‘charming villa’, Lady Beauclerk's house was also known as Little Marble Hill or Marble Hill Cottage because of its location on the grounds of Marble Hill House

The view from Richmond Hill down river included major landed estates, notably Syon, the seat of the Duke of Northumberland. Up river, among the most significant points of interest by the mid-18th century was Twickenham, its transformation from a working riverside community into fashionable retreat from the metropolis, instigated by Alexander Pope’s decision to establish a riverside villa and garden there in the 1720s.[5] As well as aristocrats and merchants, Pope’s neighbourhood attracted leading artists, who also established villas nearby. They included the society portrait painter, Thomas Hudson, and landscape artist, Samuel Scott. And it was as much for its proximity to Twickenham as its association with the royal court, that Joshua Reynolds chose to build his own villa on the brow of Richmond Hill in 1770. By this time the riverside route from Richmond to Twickenham was punctuated with a variety of prestigious residences, including Marble Hill, built for Henrietta Howard, mistress of George II; Marble Hill House, home of the amateur artist, Lady Diana Beauclerk; the villas of the Earl of Radnor and Lord Paulett; and Horace Walpole’s extraordinary Gothic fantasy, Strawberry Hill. 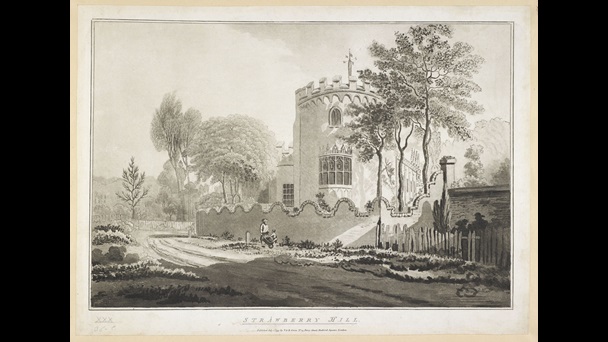 This view of Horace Walpole's Strawberry Hill - a revivalist blend of Gothic castle and cathedral - was published in 1797, just after his death

Slightly upstream, aside from Pope’s iconic villa, was the church of St Mary, where Pope was laid to rest following his death in 1744. The medieval church, a religious oasis in a sea of secularism, was remodelled in the neoclassical style in the earlier 18th century, as can be seen in William Pickett’s aquatint print of 1812. In its new guise, St Mary’s, perhaps coincidentally, seemed less obtrusive, if also less picturesque. 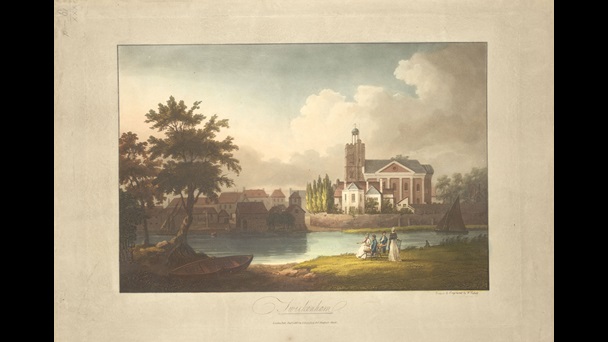 This view of Twickenham by William Pickett was taken from the banks of Eel Pie Island, which had been a place of recreation since the 17th century

Joshua Reynolds’s classical villa, adjacent to a ramshackle tavern and a pigsty, was designed by fellow Royal Academician, William Chambers, who had created a series of country residences near London for aristocrats and successful professionals. As the writer and socialite, Mrs Henrietta Pye, observed in 1760: ‘The Genius of the inhabitants inclines not towards Commerce. Architecture seems their chief Delight; in which if any one doubts their excelling, let him sail up the River and view their lovely Villas beautifying its Banks’.[6] Despite its prime location on Richmond Hill, Reynolds’s niece was unimpressed by the location of her uncle’s villa. ‘A place, to tell you the truth, I hate; for one has all the inconveniences of town and country put together, and not one of the comforts: a house struck upon the top of a hill, without a bit of garden or ground of any sort near it but what is as public as St. James’s Park’.[7]  A more popular site for villas, following the example of Pope, was by the banks of the Thames. Although most of the Thameside villas situated in the heart of Richmond have since been swept away by the tide of urban expansion, an exception is Asgill House, built in the 1750s for the merchant banker, and Lord Mayor of London, Sir Charles Asgill. Situated adjacent to the site of the former Richmond Palace, Asgill House features prominently in numerous 18th-century views along the riverside towards Richmond Bridge, including Francis Jukes’s aquatint of 1795, in the British Library’s collection.

A view looking up the River Thames to Richmond Bridge Francis Jukes’s aquatint, Richmond Hill can be seen beyond Richmond Bridge, with the Palladian-style villa Asgill House at left

Artists continued to flock to Richmond and its diaspora in increasing numbers in the later 18th century. Following Reynolds’s example, his arch-rival Thomas Gainsborough acquired a property on the hill nearby. And a generation later, JMW Turner built himself a modest villa on the opposite side of the river, where he could paint the Thameside landscape and indulge his passion for angling. Turner was alive to the Richmond landscape through his awareness of its history, its literary associations, and his own boyhood experiences in nearby Brentford. Indeed, for Turner, the literary associations as much as the lure of the landscape attracted him; not least an appreciation of the poet James Thomson, who had found inspiration there for his celebrated series of nature poems, The Seasons. And it was in his house in Richmond, towards Kew Gardens, that Thomson had lived out his final years. Turner paid his own tribute to Thomson in his great historical landscape painting of 1809, Thomson’s Aeolian Harp, while at the same time he mourned the philistine destruction of Pope’s villa, in his painting, Pope’s Villa, Twickenham. Without doubt Turner’s art had by far the greatest impact upon the transformation of Richmond and the surrounding Thameside landscape into a modern Arcadia, but he was only one of many artists who capitalised on its attractions by the early nineteenth century. William Marlow, another leading landscape painter of an earlier generation, lived and worked in Twickenham in the 1780s and continued to produce views of the area until well into the 19th century.

As Richmond’s popularity continued to grow as a playground for the leisured classes, it also became increasingly a magnet for tourists and day-trippers, who made their way up the Thames by boat from the capital in a matter of hours. Richmond’s marketability as a tourist ‘destination’ was fuelled by a boom in the market for topographical prints, and the attendant development of guidebooks, serials, and travel literature. One innovative print medium in particular, aquatint, succeeded in replicating the transient qualities of light and shadow explored by landscapists in watercolour. Among the earliest aquatint views of Richmond, published by the engravers Valentine Green and Francis Jukes from a watercolour by Richard Wilson’s pupil, William Hodges, depicted Richmond Bridge under construction. The bridge, built during the mid-1770s to replace the existing ferry between Surrey and Middlesex, rapidly became a new focal point for views of Richmond, both up river towards Twickenham and down river to Isleworth. 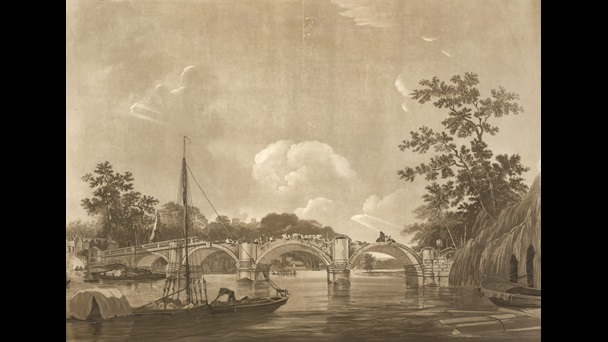 William Hodges made the drawing on which this print is based after his return from the South Pacific, just as the construction of Richmond Bridge neared completion

While Richmond and Twickenham attracted leading artists, engravers and print publishers, the area also supported local artists. They included Jonathan Brown, a miniature painter based in Richmond, who replicated his own drawings in aquatint, as well as using the services of the printmaker John Hill, whose print of Twickenham is one of several in the British Library.[8] Another local figure deserving of greater attention was Twickenham-based John Spyers, who worked as a nurseryman and surveyor at nearby Hampton Court under Lancelot ‘Capability’ Brown. Spyers’s various topographical drawings and watercolours of Richmond and Twickenham were replicated as aquatints by John Wells, as for example his View of Richmond Hill from Twickenham Meadows. Spyers was also man of means, and ambition; two albums of his topographical drawings of Hampton Court being acquired by no less than Catherine the Great.[9]

A view of Richmond Hill from Twickenham Meadows 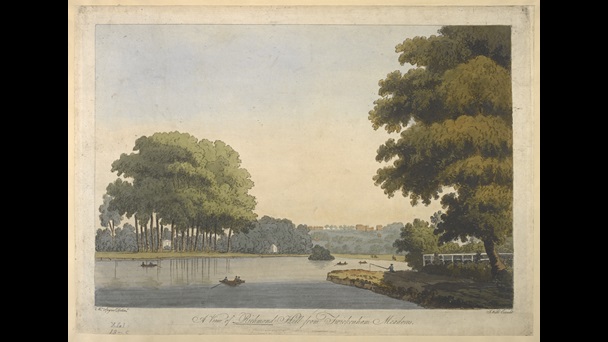 John Spyers, the creator and engraver of this view, was himself was a resident of the Twickenham Meadows area

It is surely through an enhanced understanding of the contributions made by the likes of Brown and Spyers, as well as major artists such as Turner, that we can better comprehend the ways in which Thameside Richmond and Twickenham had been transformed pictorially into a modern Arcadia by the twilight of the Georgian era.

[3] For a comprehensive catalogue of the relevant engravings see Bamber Gascoigne, Images of Richmond: A Survey of the topographical prints of Richmond in Surrey up to the year 1900 (Richmond-upon-Thames: St Helena Press: 1978), passim.