The gardens at Kew

From 1757 the royal grounds at Kew were transformed with a fabulous scheme of ornamental buildings and pleasure gardens. Engravings in the King’s Topographical Collection document the project, which was undertaken for George III’s mother Augusta. Jocelyn Anderson explores.

In the mid-18th century, the gardens at Kew were transformed into one of the largest and most elaborate gardens in the country. While there were a number of famous gardens in England which were well-known as places of extraordinary landscape design, Kew was a royal property, and the gardens there were unique. Created by the royal family, their advisers, gardeners and the architect Sir William Chambers, the gardens were developed both to house and display a growing collection of plants, and to create pleasure grounds adjacent to the royal residence. This article will focus on the pleasure grounds, and the extraordinary collection of ornamental buildings which were constructed in them.

A view of the palace at Kew from the lawn 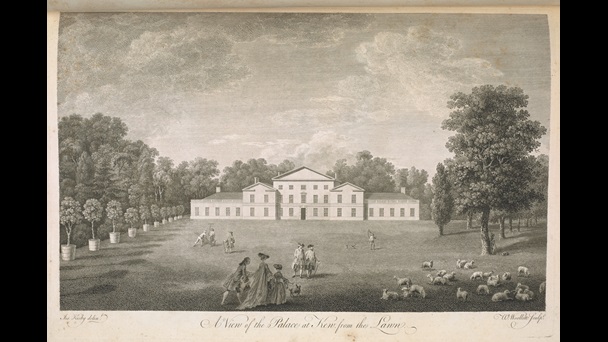 George II’s son, Prince Frederick leased the estate at Kew around 1730, as a family residence. Frederick hired architect William Kent to make alterations to the house itself (a building now known as the White House but sometimes referred to as Kew Palace in the 18th century), and he made alterations to the grounds.

After Frederick’s death in 1751, however, the property remained in his family, and his wife Augusta, then Dowager Princess, undertook the most significant garden building works between 1757 and 1763. It is likely that her work at Kew was partially inspired by some of Frederick’s plans, and partially by the interests of her son, George III, who ascended the throne in 1760. It is his tutor, and the future prime minister, Lord Bute, however, who is often credited with the overall vision for the gardens: he was passionate about botany, and he is believed to have advised on the landscaping of the grounds, a project which included the creation of a lake, an enormous lawn and a small wilderness.

Perhaps most importantly, it was Bute who ensured that in 1757, William Chambers, then a relatively unknown architect, was appointed as architect to Princess Augusta and architectural tutor to George, then Prince of Wales. Chambers went on to design numerous building projects for the royal family, including approximately 20 ornamental garden buildings at Kew.

Designs of Chinese Buildings and Furniture 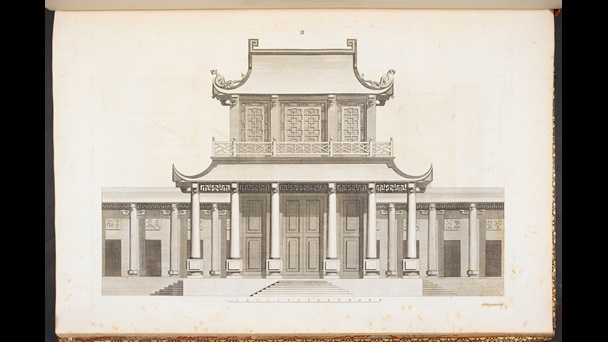 William Chambers’s Designs of Chinese Buildings, Furniture, Dresses, Machines and Utensils (1757) was drawn from the author’s years spent in China; it described Chinese design in a way that was more authentic than most previous writing on the subject.

Chambers’ architectural education had been a highly unusual one. In 1749 he had begun studying in Paris at the École des Arts run by Jacques François Blondel, who was known for teaching contemporary French architecture and architectural theory.

Approximately a year later, he had gone to Rome, a city which attracted many aspiring architects because of the opportunities to examine classical ruins first hand and develop expert knowledge of ancient Roman architecture. Before he began these studies, however, he had worked with the Swedish East India Company, and in visits to China in the 1740s, he had drawn many of the buildings he had seen there.

In 1757, he published a book on Chinese architecture. Designs of Chinese Buildings, Furniture, Dresses, Machines and Utensils was the first systematic attempt to analyse Chinese architecture to be published in Britain. This combination of experiences made him the ideal candidate to design buildings for Kew, where the intention was to build multiple structures in multiple styles.

A view of the Menagerie, and its Pavillion at Kew 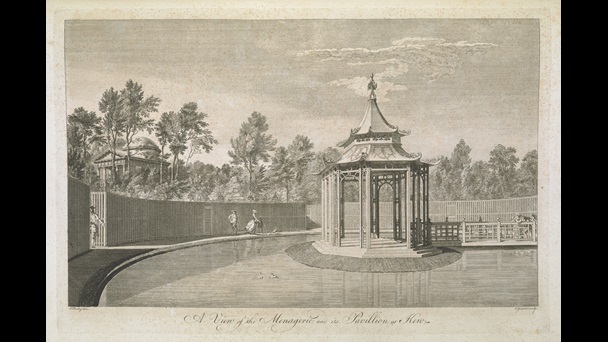 Integrating ornamental structures into landscape gardens was not only common practice in mid-18th century England, it had been in practice for decades, and the speed of the building projects at Kew indicates complete confidence in the effect to be created.

1763 was also the year Chambers published Plans, Elevations, Sections, and Perspective Views of the Gardens and Buildings at Kew in Surry, a lavish folio volume funded by the King and dedicated to Princess Augusta. Today, Chambers’s book is one of the most important sources of information about mid-18th century Kew, particularly because relatively few of the buildings survive. 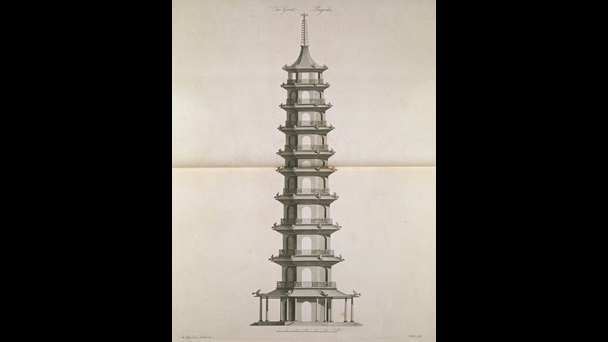 The most famous of Chambers’ buildings, both in the 18th century and today, is the Pagoda. The Chinoiserie style was tremendously fashionable in the 1750s. Inspired by Chinese design, Chinoiserie schemes incorporated – and did not necessarily distinguish between – both Chinese objects and Western creations which drew on Chinese motifs. As a style, Chinoiserie was seen as highly decorative and it was often deemed frivolous, suitable for less serious spaces, such as women’s private apartments – and gardens.

Garden buildings inspired by China were built in the gardens at Stowe in 1738 and at Shugborough in the 1740s, and a building known as the ‘House of Confucius’ had already been built at Kew, but these were nothing like the Pagoda. The Pagoda consists of ten octagonal storeys, and each storey diminishes one foot in diameter and one foot in height. It was decorated with sculptures of dragons – 80 in total – and it was covered in what Chambers described as ‘a kind of thin glass of various colours, which produces a most dazling [sic] reflection’; the very top was gilded.[1]

In analysing Chambers’ account of the Pagoda, David Porter has noted that not only was the Pagoda at the centre of Kew, the book included a lavish description and three accompanying illustrations (one of which folds out), which suggests Chambers was extremely proud of this building, even though the majority of his career was devoted to designing classical buildings.[2]

A view of the Wilderness, with the Alhambra, the Pagoda and the Mosque 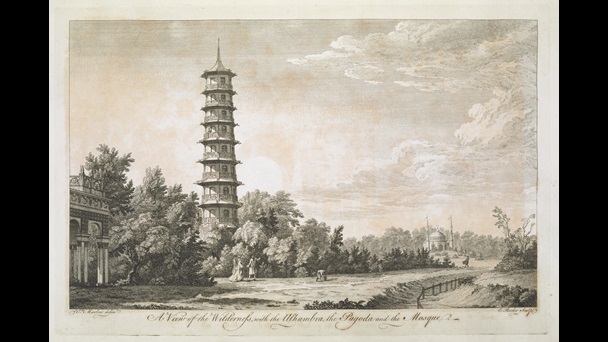 This view of the ‘wilderness’ at Kew shows the positions of the now demolished Alhambra and Mosque, in relation to the Pagoda which still stands

The Pagoda was built at the southern end of the gardens, and there it was framed by two other structures which also drew on exotic, non-Western traditions. The Alhambra was inspired by Moorish architecture; Ray Desmond has noted that Frederick had intended to build a Moorish structure, and Chambers’ design was derived from a drawing Johann Heinrich Müntz originally prepared for him.[3] Like the Pagoda, it was a colourful building, as was the Mosque on the opposite side.

According to Chambers, the exterior of the Mosque had been designed to ‘collect the principal particularities of the Turkish Architecture’: it had a large dome, two smaller ones, two minarets, and an Arabic inscription.[4] Nebahat Avcioğlu has argued that this would have been seen as an adaptation with appropriate decorum because ‘It was common knowledge at the time that only those mosques built by the Ottoman sultans were allowed to have large domes and more than one minaret’.[5] Chambers had no direct experience of Turkish architecture, but he knew enough to build a royal mosque for a royal patron.

Plan & elevation of the Gothic Cathedral 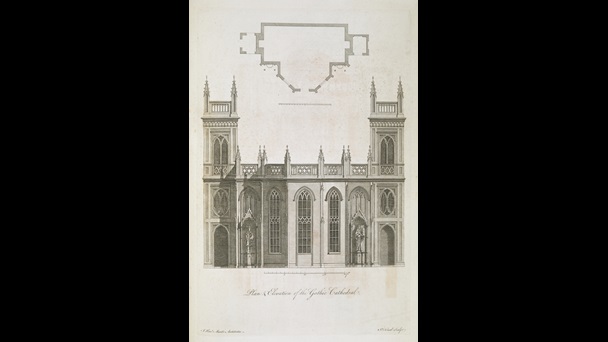 One of the few non-classical buildings in the gardens at Kew, the Gothic Cathedral is testament to the growing interest in the art and architecture of the medieval period in the mid to late 18th century

Though they were prominent, these non-Western inspired buildings were ultimately in the minority at Kew. Chambers designed a number of classical temples, including the Temple of Arethusa and the Temple of Victory, a circular temple surrounded by Ionic columns which also provided a viewing platform for the Alhambra, Pagoda and Mosque. The gardens also included a Gothic Cathedral, which was designed by Müntz and one of few buildings not designed by Chambers himself.

The number of styles and architectural traditions represented at Kew was unusual, and has fascinated historians. Noting that these buildings were built as Britain achieved important victories in the Seven Years’ War, Avcioğlu has argued that ‘the vision of a global British empire was first staged’ at Kew.[6] The relationship between the gardens and the political stage is a tantalising one, and John Harris has argued that part of Bute’s vision was to create ‘a royal garden, one that could serve as a quasi-national botanic garden of the sort that had never existed in England’.[7] At the same time, it was not a Crown property: the royal family continued to use it as a place of residence, one where they could have greater privacy than they could at Windsor or in London, and they did not purchase the land until 1799.

Genteel travellers, both British and European, could visit the gardens, and guidebooks were published for their benefit; for example, P. Norbury and George Bickham printed A Description of the Gardens and Buildings at Kew in 1763 (this volume helpfully included descriptions of other local attractions, royal palaces and a couple of popular country houses). Many of these texts drew on the book Chambers had written, presenting information about the buildings according to the route visitors were expected to take if they were granted permission to tour the grounds. Ultimately, the illustrations of the gardens at Kew not only record an important 18th-century garden which has since been completely transformed, they demonstrate how those gardens became famous in their own time.

[1] William Chambers, Plans, Elevations, Sections, and Perspective Views of the Gardens and Buildings at Kew in Surry, the Seat of Her Royal Highness The Princess Dowager of Wales (London: J. Haberkorn, 1763), p.5.