The natural world through early modern strip maps: a narrow view of nature

This article presents a discussion on British travel maps – mostly from the 18th century – the cartographic representation of roads and the effect these had on the traveller's perception and experience of travel. As such, this it is principally concerned with the traveller and the consumption of maps rather than map-making and the 'knowledge in making' of the surveyor or cartographer. The main point is that 18th-century travel maps marginalised topography, the physical appearance of nature, literally reducing it to the map's margins. These are maps of speed and mobility, of travel itself, not representations of an area of land or landscape. As representations of travel, the maps we will look at are, in their way, mapping the modern within early modern Britain. In British history, modernity has, among other attributes, been characterised by some historians as the new and distinct presence of speed; not just the broad history of increasingly rapid societal change but the acceleration of the daily experience of life. Travel – physical movement through geographic space – was a prominent activity in which this increase in speed, this modernity, was experienced. The strip map was the pre-eminent guide to this modern world. 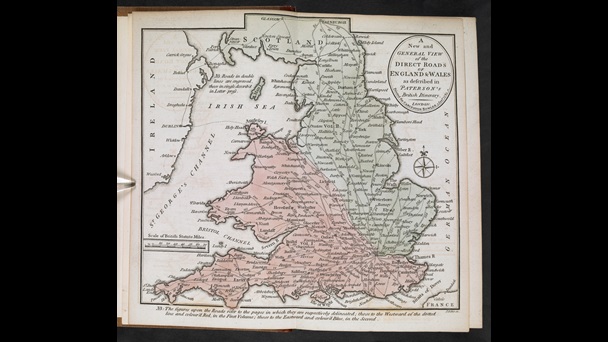 The road-building boom led to the publication of many new road maps, like this one by Daniel Paterson

As illustrated in the foldout map from Paterson's 1785 British Itinerary, by the late 18th century, the nationwide proliferation of new or improved turnpike roads had created a national network that was, as with other British advances in technology, the envy of Europe. However, the modernity of the early modern road network in Britain does not rest in its existence or its extent; many roads followed very ancient routes, but in the speed of movement within it. These new 'direct roads', as Paterson calls them, were 'metalled', that is, dressed to a firmness and fineness of surface that allowed horses and coaches to move fast safely. Consequently, journey times between A and B became exponentially shorter throughout the 18th century. Faster journey times enabled both more journeys and longer journeys, making the world much busier and to seem at once both larger and smaller.  It was, as the poet John Taylor wrote, 'a rattling, rolling and rumbling age. The world runs on wheels'.

Travel maps and itineraries (tables of destinations and distances) were produced in order that the modern traveller – more specifically the wealthy, elite, map-buying traveller – could physically and conceptually navigate this fast-moving world. These are not conventional maps. Travel maps provide information on places to leave from, places to go to, and the roads in-between, not geographic space. They depict the lines of roads punctuated by the nodes of cities, towns, villages and stage stops (inns to change horses, rest, eat, sleep: a welcome break). Topographic features such as rivers, hills, moors, fields or forests are featured only as encountered en route (not least because they were obstacles or navigational waypoints).

Map 3 and 4 from Paterson's Itinerary shows the Great North Road through Bedfordshire towards Cambridgeshire from Baldock to St Neots passing through Biggleswade, Buckden and Huntingdon. It also shows the 'principal inns' along this section of the Great North Road including the famous Wheatsheaf Inn at Alconbury Hill. What is striking about this map is the 'strip' format. The narrow strip breaks the early modern cartographic convention whereby maps illustrate geopolitical areas – countries, counties, towns – within a square or rectangular frame. Such maps are representations of place, of broad settlement within a landscape. In contrast, the strip map is a linear representation of routes, long and narrow. As in similar publications, Paterson's strips are arranged into columns or narrow, vertical cells, two or three per page to fit a standard pocket-book format. Within each cell, the road dominates, mapping a line of travel moving from bottom to top, up the page. Topographical information such as the representation of a wider landscape is reduced to only what is found within the margins: it is a narrow view of nature, not only in the limited topographic information depicted in the area shown but literally so in the restricted horizons bounded by the cell: that is, the immediate view from the carriage window. It is this representational prioritisation of (fast) travel over the physical world that makes these maps artefacts of a modern world. From one strip map to the next, the topographic information provided such as hills, trees (woods) and prominent buildings varies. The topography illustrated by Paterson is particularly minimal. Overall, within the reduced world of the cell, some strip maps include more landscape features than others. Broadly, but not consistently, later maps contain less topographic information.

Smith's New Pocket Companion of the Roads of England and Wales 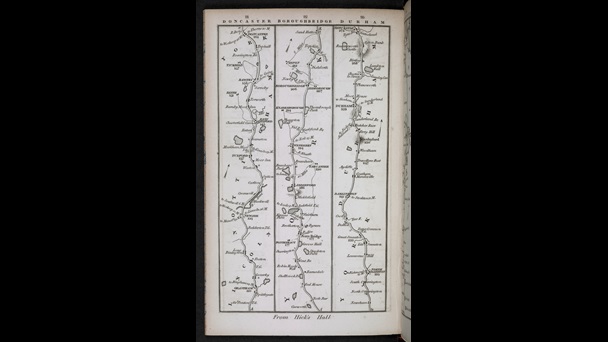 In the section of the Great North Road from Grantham to Newcastle in Smith's 1826 New Pocket Companion to the Roads of England and Wales, particularly steep gradients are marked, as are the boundaries of country estates. Besides the road itself however, the space within the cells is mostly dominated by text identifying waypoints and destinations. In contrast, if we look at the road from London to Flamboroughead in Yorkshire from Ogilby's 1675 folio atlas, Britannia – one of the earliest collections of early modern strip maps (the format itself harks back to the 13th-century pilgrimage itineraries of Matthew Paris) – we find that a range of rich diversity of topographic features are depicted (in relief rather than plan form) such as hills topped with little windmills. 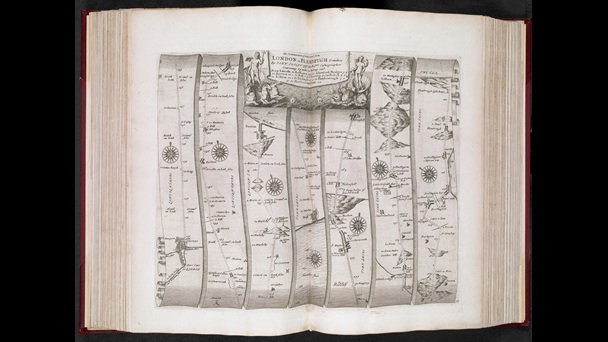 John Ogilby's Britannia (1675) is one of the earliest road atlases of Great Britain.

Ogilby's maps show the extent of the national road network in the mid-17th century. This is not the same world as the fast-moving turnpike network shown in later 18th century maps. In 1675 London to Chester took four days; by 1790 this had dropped to one day. Looking at a wider British Atlantic work, trees, rivers and hills encountered en route feature frequently in Colles' 1789 A Survey of the Roads of the United States, as seen here in a stretch of the King's Highway from New York to Trenton via Princeton. 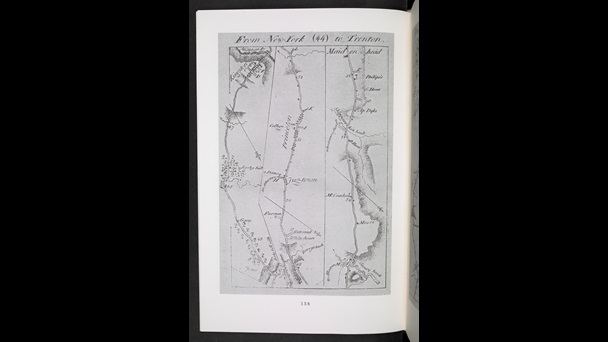 For the most part, excluding Ogilby's large-format atlas for instance, strip maps were published as practical pocket-sized books intended to live mobile lives in the landscape. They were not folio editions destined for the library table and quiet contemplation. They were interactive objects to be used on the road. Even looking at a strip map we can gain some sense of the movement intrinsic to these images: the map resting on a traveller's lap, a finger tracing the route, moving along the line of the road from crotch forward toward the knees and the open road ahead. Strip maps served the needs of the traveller. For the traveller focused on getting there, movement through the landscape was presented as it was experienced: a narrow, linear world of A, B, the road, and its immediate margins. The traveller had no need to know what landscape features lay beyond those margins. Of course, this abstracted state of travel was only possible through the speed of travel – quickly covering large distances on good roads – combined with the absolute reliability of travel maps.

However, some travellers wanted to know where they were for reasons of pleasure and delight. The late Georgian phenomenon of the polite tourist was deeply connected to the picturesque movement and the visual appreciation of landscape. Like any other traveller the polite tourist used travel maps to navigate their way through the hills, moors, glens and country houses of the British Isles, although as we have seen, the format of strip travel maps had evolved to the exclusion of topography. Moreover, topographic features – the hills, moors, glens and country houses – were, for the tourist, not in-between places but destinations in themselves. However, travel accounts such as The Wanderer (1804) reveal that the very modern tourist practice of travelling as quickly as possible to an approved site in which to move slowly was also well established by the late Georgian period.

The solution to this cartographic conundrum was found in publications such as Baker's Imperial Guide. In format and page layout this travel book is much like a standard collection of strip maps. However, the information provided in each strip has changed, as has its visual presentation. The finger still traces the line of the road, moving upward and onward from bottom to top of the page, but the line now moves through a sequence of landscapes (and townscapes), so-called 'miniature likenesses' of pleasant hills, church spires and country house elevations – informing the traveller not only of where they are but also what they will enjoy looking at. Here, the physical distances of geographic space are abstracted as the landscape is brought to the fore and big vistas – not just the immediate view from the carriage window – are shrunk to fit within the margins of the cell. 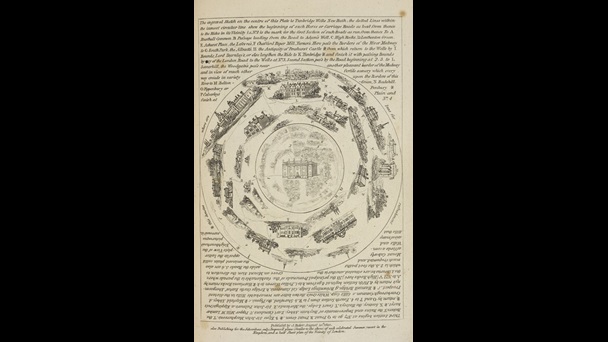 This abstraction and squeezing together of sights is taken to an extreme in this circular map from the Imperial Guide depicting the scenic day trips that could be made when staying in Tunbridge Wells (shown at the centre of the circle). So, tourist travel maps embody a confluence of 'modern' concerns: the desire to move speedily forward and the desire to stop and stare.

Survey of the High Roads from London 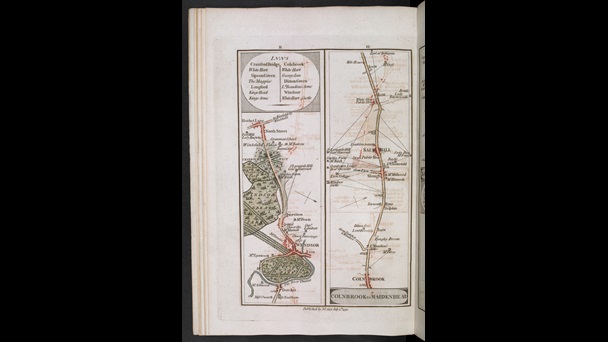 Indeed, if we look at Cary's 1799 Survey of High Roads from London, we find just such a confluence in a book that is both practical travel aide and tourist guide. This is a map of the road from Colnbrook in Berkshire to Maidenhead in Kent showing the route through Windsor Great Park. All practical stuff – it even shows turnpike gates – but the map is also marked with sightlines from various points along the road towards picturesque sights such as Eton College and Windsor castle.

The strip map is a distilled representation of early modern travel in which topography is reduced to the immediate features encountered on a line of travel. As fast direct roads became the norm, there was no need for the topographic conventions of the survey map. Strip maps are very modern maps because they represent a world in which a traveller could move speedily around a reliable transport network: travel without the need or desire to know one's whereabouts. Nature is first reduced, then eliminated from the cartographic imagination, to present a fast, mobile modern world outside of nature.

This essay is an edited version of a text first presented at the British Library’s Transforming Topography conference, 6 May 2016, kindly supported by the Paul Mellon Centre for Studies in British Art. Films of the conference talks are also available here.