The spectacle of the panorama

What was a panorama? Markman Ellis explores the evolution of this immersive form of topographical art.

The panorama was among the most astonishing and popular of visual spectacles from the early 1790s through most of the next century. A panorama was a painting – a very big painting – hung on the inside of a specially built circular building. Viewers paid an entrance fee to see it, entering by way of a tunnel and staircase into the very centre of the circle, where they could see a painting that surrounded them on all sides, around 360 degrees. A fence or barrier prevented viewers from getting close to the massive painting, whose top and base were also obscured from view. Depicting landscapes, city views, and battle scenes, the panorama had a distinctive, unprecedented, and utterly unusual effect: it made the viewer feel like they were really there. 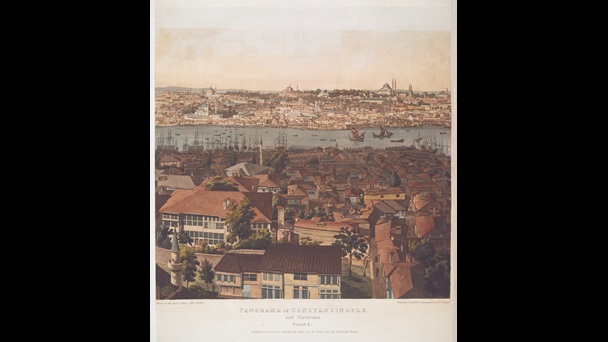 For 18th-century Britons, Constantinople, now Istanbul, was perceived as a city of charm, exoticism and historical pedigree

The panorama was the most convincing visual delusion mankind had ever devised. Viewers of the panorama, for example, of Constantinople (now Istanbul) at Barker’s Panorama in London’s Leicester Square in 1801-02 could be deceived into thinking that they had been magically transported to a distant foreign location. This delusion does not last long, depending on the viewer’s acuity, but it is an astonishing feeling while it lasts.

After a few minutes, viewers see through the delusion and recognise the painting for what it is, a kind of landscape painting. But the panorama has been seen as the precursor of other visual delusion spectacles, most notably the cinema – especially spectacular versions of cinema like Cinemascope (an anamorphic lens used to shoot especially widescreen film), or IMAX (Image Maximum film, with the capacity to record and display images of great size and high resolution).  It is probably no accident that the panorama came into fashion at a time when actual international travel had been severely curtailed by the effects of the Napoleonic War.

In more recent usage, the term ‘panorama’ has come to mean any comprehensive overview of a subject, whether a television documentary or a tourist viewing point, such as that achieved by panning a camera across a whole view from beginning to end from a fixed point. The cameras on many smartphones also allow a long narrow view like this to be taken. 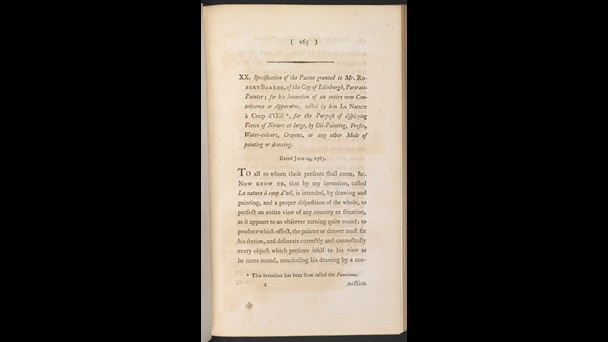 Robert Barker received a patent for the concept of the ‘panorama’ in 1787, before he invented the name itself

Yet the word ‘panorama’ was invented, from its Greek roots, in 1792 by an Irish painter and entrepreneur, Robert Barker (1736–1806). He had submitted a patent for it in 1787, though the word ‘panorama’ was not actually in it. His ‘invention, called La nature à coup d’œil [Nature at a glance], was intended, he said, ‘by drawing and painting […] to perfect an entire view of any country or situation, as it appears to an observer turning quite round’.

The first full and truly successful panorama exhibition was in London in 1792 and depicted London itself, the ‘Panorama of London from Albion Mill’. Visitors saw a view of the two cities of London and Westminster, from high on the roof of the Albion Flour Mill overlooking Blackfriars Bridge. The foreground was dominated by the bridge and its approaches, while the river covered in boat traffic, with the twin cities, are seen from a distance, including churches, state buildings and cultural sites: St Paul’s, Westminster Abbey and the city churches; the Monument, the Tower, Parliament and Whitehall.

It was a captivating view. George Woodward (1760?–1809), a caricaturist and satirical writer, described in his Eccentric Excursions (1796) the intense curiosity aroused by the panorama’s view over the bridge and street approach:

Looking down-wards the variety of people, carriages, horses, &c. passing and repassing, in one continual line of great extent, heightens the general effect, and brings Milton’s descriptive lines in full force to the memory:

'Populous cities please me then,

The panorama was a trick painting, designed to produce an illusion. The level of everyday detail was important to its success: in his first London panorama, Robert Barker’s painting is based on his son Henry Aston Barker's (1774–1856) depiction of an itinerant tradesman knocking at a door, his basket on the pavement, while a woman looked out of an open first-floor window. The street was busy with people from many stations of life, including street sweepers, porters and workmen. The foreground is detailed, animated, compelling. One contemporary visitor to the panorama was struck by the ‘baker knocking at the door’, and wondered why ‘the man did not move!’.[2]

Section of the Rotunda, Leicester Square 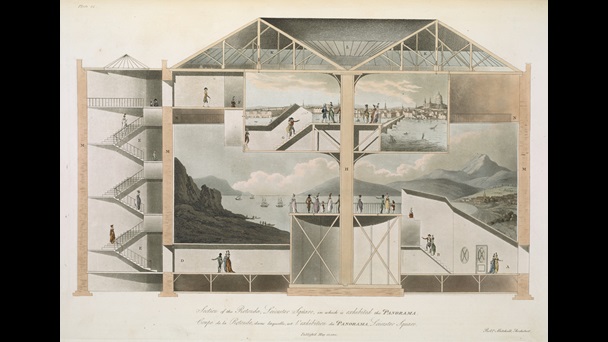 When the painter Charles Robert Leslie (1794–1859) went to see a panorama in 1812, as an 18-year old art student, he observed that panoramas ‘are perfect in their way. The objects appear so real, that it is impossible to imagine at what distance the canvas is from the eye'.[3] Leslie understood that bending the painting around 360 degrees meant that the picture’s surface and its perspectival plane became incoherent to the viewer, giving an unprecedented sense of depth. Restrained from approaching close enough to see the brush-strokes, the viewer experienced a kind of immersive wonder. The panorama was an ‘illusion […] as complete as it is possible to imagine’.

After the first panorama, Barker painted further paintings of naval scenes and panoramic views of Bath, Brighton and Windsor. His son Henry Aston painted the panoramas from 1803, exhibiting four new panoramas a year, including battle scenes on land and sea (Nelson at the Battle of the Nile, Wellington at Waterloo), cities (Rome, Berlin, Athens, Constantinople, Moscow) and landscapes (the Alps, the Bay of Naples). Views of Empire (the Ganges, Canton, Sydney, the Bay of Islands in New Zealand) were particularly popular.

Panorama paintings were exhibited for a season, and then replaced for the following season, to entice visitors to return again. The old panorama was then sent on tour around a chain of display buildings that were built in cities across Britain, Europe, America and the rest of the world. Almost no original panorama paintings survive, because they were literally worn out by their constant display. 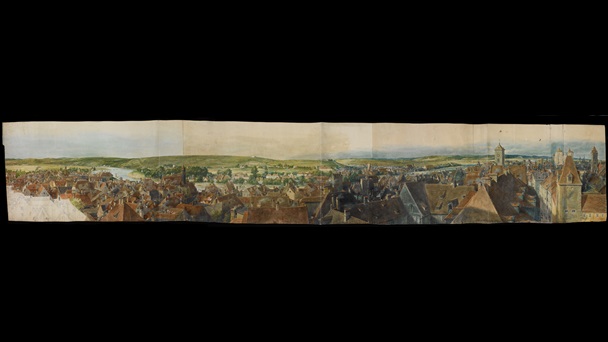 Panorama visitors were provided with a descriptive key to the view, included in the entrance price. These paper souvenirs informed them of significant sights they were seeing, by way of a written description and a visual key or diagram. The British Library has a large collection of these guides. The text allows the viewer to continue to pretend they are really visiting some foreign place: inspecting the painting as if in a viewpoint overlooking the city. The diagram keys related the painting to the information.

Early panorama keys attempted to reproduce a sense of the 360-degree quality of the panorama in two dimensions by using an anamorphotic projection, a drawing technique developed in the scientific study of perspective in the 15th century.[4] Such guides spread the information about the panorama in a circular depiction. Later panorama keys presented the information in a printed strip, of greater or lesser detail. Some panoramas also issued large-scale aquatints that depicted the whole painting in a series of six or eight images.[5]

Description of a view of Bombay, now exhibiting at the Panorama 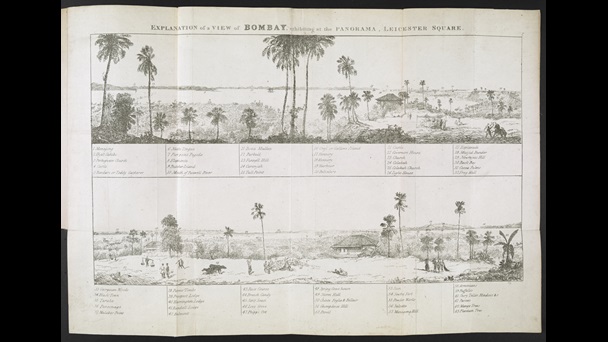 This is a key to Robert Burford’s panoramic painting of Bombay (now Mumbai), exhibited at the Panorama of Leicester Square in 1831

Many visitors found the panorama a wonderful experience. The peculiar force of the panorama’s immersive experience was widely celebrated as a wondrous delusion. On a royal visit in 1793 to a panorama depicting the British navy at Spithead, Queen Charlotte was reported to have said ‘that the sight of this picture made her feel sea-sick'.[6] Another commentator reported that

One feature in this picture was the capsizing of a ship’s boat, with sailors struggling in the waves. It happened that a gentleman who visited the exhibition of this picture was accompanied by a Newfoundland dog, and the animal, on seeing this part of the painting, sprang over the hand-rail, to rescue the drowning men.[7]

As numerous connoisseurs and virtuosi noted, the panorama experience was not one that required refined taste or exquisite education to feel.

But the panorama also attracted criticism, especially from those who thought that the delusionary effect it produced pandered to a vulgar taste. Such a visceral effect meant that no special training or taste was needed to appreciate a panorama. Hester Piozzi (1741–1821) attacked the panorama as an example of the debased fashionable thinking of the period, which she saw focused in its delusive powers. It was, in her words ‘a mere deception, ad captandum vulgus [to please the rabble].[8]

Another viewer who worried about the panorama was the poet William Wordsworth. In one of his visits to London in the 1790s, the poet seems to have visited the panorama, one of the Spectacles / Within doors; of the city. In Book Seven of his long autobiographical poem The Prelude, in the version finished in 1805, he describes how ‘the Painter’ is:

And with his greedy pencil taking in

A whole horizon on all sides.

But Wordsworth found the panorama and its delusion a kind of ‘life-like mockery, to East, /To West, beneath, behind us, and before’ (252–64). Wordsworth criticised how the panorama appealed baser instincts, like the popular taste for supernatural wonders.[9] As Wordsworth surmises, the delusion caused by the panorama is what makes it seem so modern, a precursor of mass media.[10]

[8] Hester Lynch Piozzi, British synonymy; or, an attempt at regulating the choice of words in familiar conversation (London, 1794), p. 163.