Thomas Smith of Derby's 'Prospect in the upper part of Dove-Dale, five Miles North of Ashbourn'

Thomas Smith of Derby’s views of the Peak District are celebrated as early examples of the Sublime in English landscape. Nick Alfrey analyses how one plate can also reveal the wider concerns and interests of the artist and his audience.

Prospect in the Upper Part of Dovedale 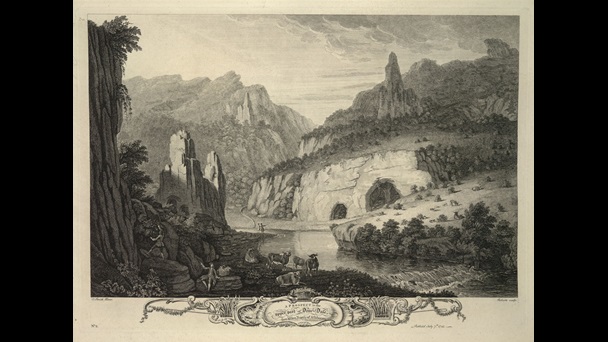 This print depicts the spectacular scenery of the gorge of the River Dove in the Peak District. It shows a landscape of improbable natural wonders, for who could believe that such a scene could be found in England? But as the title indicates, the location is ‘five miles North of Ashborn’, and for all its apparent wildness this is also an image of gentlemanly pursuits and rural property. It is notable as one of the earliest representations of Dovedale, and documents the emergence of a sensibility – the pleasure afforded by wild places. That pleasure is seen here enjoyed by a fortunate few, but within a century, Dovedale was well on the way to becoming one of the most popular tourist destinations in the region.

The print by James Roberts is derived from a painting, now untraced, by Thomas Smith of Derby. Smith was a pioneering figure in landscape painting, but it was his activities as painter-publisher which helped secure his success, and ultimately, his reputation. This plate is from his first enterprise in this line, a series of prints titled Eight of the most Extraordinary Prospects, Taken in the Mountainous Parts of Derbyshire and Staffordshire; commonly call’d the Peak, and the Moorlands. Smith issued a prospectus for the series in June 1743 and this print, the second plate in the set, was published on 7 July that year.[1] (There are impressions of this plate with later dates elsewhere in the British Library and in other collections. Smith reissued the whole set in 1757 with the new date inserted in order to renew his copyright, and after his death John Boydell acquired the plates and re-published them in 1769.)

The Eight Prospects are all views of Derbyshire rivers, including the Derwent, Wye and Manifold. Two plates are devoted to the Dove, carefully distinguished as taken three miles and five miles from Ashbourne respectively. The prominent cave in the centre of this composition can be identified as Dove Holes: the two large entrances have almost exactly the same appearance today. The heights of the surrounding crags and spires of rock have been somewhat exaggerated for effect, but anyone walking up Dovedale today would have no difficulty recognising the scene.

Smith is known today as one of the earliest exponents of awe-inspiring English landscape, creating scenes of crag, precipice, cave and cataract long before the sublime had wide currency as an aesthetic. These elements are all present in A prospect of the upper part of Dove-dale, and yet in the short explanations which the artist provided to accompany his plates he makes it seem as much an exercise in the other mode in which he specialised, the estate picture.[2] He mentions the owners of the land before commenting on what is extraordinary in the prospect.

His text informs us that ‘the Foreground … is the Property of Stelley Pegge of Beechif Esq’. This is presumably Strelley Pegge of Beauchief, who had been High Sheriff of the County of Derby in 1739, four years before Smith’s publication. He lived at Stanshope Hall on the plateau to the west of the gorge, that is, out of our range of vision high up to the left. Smith also tells us that the ‘second Mountain’ (the one above the cave) ‘belongs to the Honourable Lady Every of DERBY’, while ‘the most distant mountain’ belongs to Hanson Grange, the property of Isaac Borrow. Borrow was another influential figure in Derby, and a former mayor of the town. The plate is duly dedicated to these three proprietors in an obvious appeal to their patronage. The only visible sign of any claim to the landscape, however, is the short stretch of wall which curves up from the river’s edge and goes behind the cliff, marking the opening of the subsidiary valley which slopes steeply up to Hanson Grange. This boundary between neighbouring estates is a small but telling accent in a scene more immediately striking for its startling natural features.

Thomas Smith may have been one of the first artists to depict Dovedale, but the literary associations of the valley go back rather earlier. The upper reaches of the Dove feature in Izaak Walton and Charles Cotton’s Compleat Angler; Cotton’s celebrated dialogues between the characters Piscator and Viator (Latin for fisherman and wayfarer) were added to Walton’s book for its fifth edition in 1676. A memorable episode from these dialogues concerns a feature that also appears in Smith’s prospect: the oddly named hill known as Hanson Toot, the ‘distant mountain’ Smith noted as the property of Hanson Grange (‘toot’ apparently means ‘lookout’ in Derbyshire dialect). ‘Prepare yourself to be a little frightened’, Piscator tells Viator as they approach the brink of the gorge where the steep descent to the river begins, and the latter exclaims that it is ‘the strangest place that ever (sure!) man and horse went down’. But there is no reason to suppose that Smith chose his viewpoint with any reference to Piscator and Viator’s experience in mind. By this time, the Compleat Angler had been out of print for nearly 70 years. The cult that formed around it is a later phenomenon, and Smith’s image records an early stage in the culture of Dovedale, before so many features along it had been named after incidents in the book.

One detail in Smith’s Prospect alludes to the fact that the Dove was no wild upland torrent but a highly managed river. A modern writer has described the elements of the scene in terms that link it to the mountain subjects associated with ‘Savage’ Rosa, the 17th century Italian landscape painter much admired at this time: ‘a thundery sky, rapids on the river and caves’.[3] It is not white water we see here, however, but one of a series of weirs that regulated the flow of the river. Their purpose was to create placid reaches in order to produce the optimum conditions for fishing. The emphasis on strange rock formations, yawning caverns and looming heights is here perfectly compatible with an idea of the natural world as more productive than intimidating.

This inclination to treat landscape as a resource rather than mere spectacle must also account for the disappearance from the landscape of a conspicuous feature in Smith’s composition. In his Short Explanations to his prospects he draws attention to ‘a natural Pyramid of Marble 109 Feet high’ (a very specific measurement) on the heights immediately above the caverns. No trace of this remains today. Derbyshire marbles were a valuable commodity, and presumably this natural stack proved irresistible, and has been entirely quarried away.

A prospect of the upper part of Dove-dale brings out the sheer bounty of the valley through its imagery and the artist’s accompanying commentary. The latter concludes with the observation that ‘several Gentlemen curious in Botany assert it to be the best natural Physick Garden in EUROPE’. Smith singles out Lily of the Valley as growing in great profusion, and perhaps it is this plant that the two figures shown scrambling among the rocks in the left foreground are looking for. Lily of the Valley is a toxic plant, but like the foxglove, was widely used as a diuretic in the treatment of dropsy. The plant slows the heart rate down: how fitting that it should be found in such abundance in a landscape astonishing enough to make the heart beat faster.

Eight Prospects of Derbyshire and Staffordshire 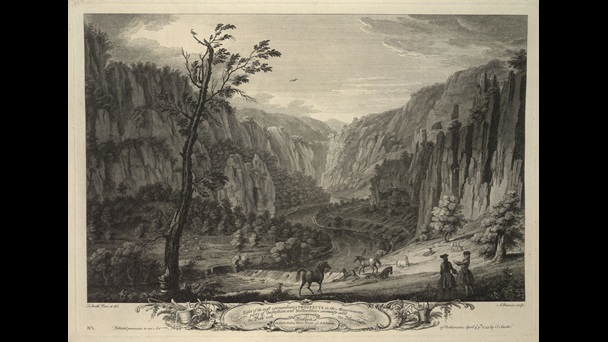 The complete set of prints by Thomas Smith.

[2] Short Explanations of the Eight Prospects, Taken in the Mountainous Parts of Derbyshire and Staffordshire; commonly call’d the Peak, and the Moorlands, British Library, Maps K.Top.11.19.a.