Emeritus Professor of History of Art at Bristol University, Stephen Bann, offers his thoughts on the concept of topography in contemporary art.

I am going to float some ideas about how useful the concept of topography may be in thinking of what has already being done, and is still being done, by contemporary artists. And I don’t think this is fundamentally a different issue from what has been suggested in some of the papers presented [at the Transforming Topography conference, British Library 6 May 2016 and published on this site]; about topography being involved with ‘contemporary social anxieties’ and ‘politically unstable subjects’ (to quote from the synopsis for Lucy Hodgetts’s talk).

I have a personal axe to grind because, over thirty years ago, I collaborated with the landscape artist and printmaker Bob Chaplin to create an exhibition that we called ‘A Mythic Topography’.[1] And I used the word ‘mythic’ in response to a fascinating comment by Roland Barthes, in an article on Stendhal. ‘What must there be to make a Myth’, Barthes asked. The answer: ‘There must be the action of two forces’. In Barthes’s view, Stendhal transformed his reflections on Italy from being merely personal and journalistic through the writing of his novel, La Chartreuse de Parme, which begins with Bonaparte’s invasion of Italy: it is in other words Bonaparte crossing the Alps as an invader who sets up the necessary ‘antithesis, opposition, paradigm’ between two cultural forces, and hence creates the ‘mythic’ resonance. This seemed to me the appropriate way of introducing a collection of collaborative prints that commemorated, among other things, the original Roman invasion of Britain and its ghostly presence, not so much physical as legendary, in the existing landscape of the South Downs.

In the poem/print ‘Jullieberry Downs: The Absence of the Past’, two borrowed texts were juxtaposed: one from the 18th-century antiquarian Hasted’s History of Kent and the other from Hilaire Belloc’s musing on the initial encounter between the native Britons and the invading Roman army, in an essay entitled ‘The Absence of the Past’: ‘Here the river was forded; here the little men of the South went up in formation: here the Barbarian broke and took his way, through devious woodland paths, scattering the pursuit; here began the great history of England’. The two images that complemented these texts - silk-screened after photographs of a misty hill-top, served to underline the problematic encounter of history and the landscape.

Jullieberry Downs - The Absence of the Past 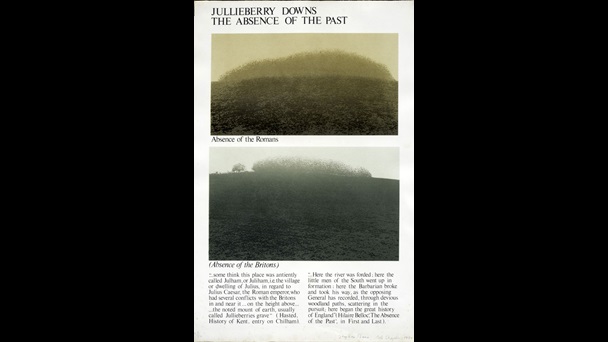 Bob Chaplin and Stephen Bann's screenprint is an example of the 'mythic topography' influenced by the work of Roland Barthes.

I want, however, to broaden the scope of this reference by drawing attention to its significance in the context of the splendid exhibition of British Conceptual Art of the 1960s/70s that was on show at Tate Britain in the summer of 2016.[2] This was a path-breaking show, if only for the reason that the kind of categories to which we have become accustomed in looking back at the work of these artists of the post-war period  - Art & Language, Land art etc. - have been fused in a single continuum. So that we have something to consider further in global terms, which is not Pop art, obviously so, and of course not painting or sculpture as traditionally conceived, but the art produced by a generation whose common features might well be located in their adherence to the kind of conceptual programme to which Barthes draws our attention -that is, to the use of antithesis, opposition and paradigm. So where does topography belong in this conspectus?

I might simply say that there is a fundamental connection between what we now know as Land Art and topography - a connection which is possibly more important, and certainly more interesting to investigate, than the historical connection with traditional landscape painting. This is perhaps an obvious point to make, but it is well worth pursuing further. Though I have no opportunity to do that in this brief contribution, I do want to say is that the artist shown in the Tate exhibition who most clearly develops and refines a topographical mode of working is not necessarily Richard Long or Hamish Fulton, but a practitioner who would not normally be associated at all with Land Art: that is, Victor Burgin.

When Victor Burgin returned to Britain from the United States, and held an exhibition in 2002 that was significantly titled ‘Relocating’, I wrote a catalogue essay on what I then termed his ‘Critical Topography’.[3] The superb show that he held in the summer of this year at the John Hansard Gallery powerfully reinforced my contention that Burgin is essentially a topographical artist. That is to say, in his video installations (as formerly in his photographic works) he assumes and further investigates the connections and contradictions that a historical focus on specific places quite literally brings to light. It is enthralling to follow the narrative in which he roots his wide-ranging engagement with the ideas of Roland Barthes in the stunning Alpine scenery forming a backdrop to the sanatorium where Barthes was confined in his youth.

There is a further argument to be pursued here about the issue of medium as it affects the development of topography. I would point for example to the astuteness and alacrity with which topographic artists over the past two centuries have espoused every new (or newly rediscovered) medium, from etching to lithography and photography, concluding in Burgin’s case, with the video installation. But that is an argument that, at this stage in our debates, will have to be left on the table.