William Burrell’s topographical collections at the British Library include 1,300 watercolours of views, antiquities and buildings, a treasure trove for researchers as John Farrant explains.

Nowadays the greater significance of William Burrell’s extensive topographical collection arguably lies in the 1300 watercolour views of Sussex in nine volumes which he commissioned from the Lamberts and Grimm.

James Lambert (1725-88) aspired to be a painter of Claudian-style landscapes in oils, but had to settle for making a living in Lewes as a musician, stationer, decorative painter and watercolourist of prize cattle and sheep, touristic views and gentry houses, assisted by his less talented nephew, also James (1744-99). It was James Elliot (1724-82), a Lewes-born but London-based lawyer, who first commissioned, in 1771, drawings of his home town’s antiquities. From his stock Lambert made copies for Burrell but he also drew churches and other historic buildings, as and when opportunity allowed, without expecting a wider market: the 269 watercolours in Burrell’s collection divide fairly evenly between the two categories.

Drawings of Castles and Churches in Sussex 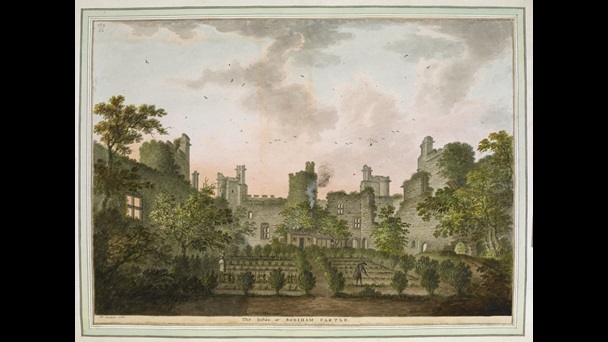 The Lamberts' work focused on touristic views and historic buildings in Sussex.

From 1778 Samuel Hieronymus Grimm (1733–94), Jerome to his friends, was working for Burrell and from 1780 accompanied him for at least part of the Whitsun tour. Perhaps he was recommended by Grose who had written to a prospective client in 1777, ‘he is nearly the best draughtsman in London. His expenses will be very moderate … This Grim is a very modest, well behaved man and will do as he is bid and not give himself those impertinent airs frequently assumed by artists much his inferiors in abilities.’ Born in Switzerland, Grimm moved first to Paris and then, in 1768 to London where he took lodgings in Covent Garden which were to be his home for the rest of his life. His artistic output in England fell into three categories. First, there was commercial work for engraving. He continued to work for Swiss publishers, and in London, for example, the frontispiece and vignettes to Francis Grose’s Antiquities of England and Wales, 1 (1773). Secondly, various watercolours of Shakespearean, classical and genre scenes, and also topographical views around London, may have been made in the hope of their being taken up by publishers or of attracting orders for copies from private collectors. Thirdly, and most important, were commissioned watercolours of antiquities, historic buildings and landscapes.

In this last field he was well established from 1773. Some commissions were very specific. The Society of Antiquaries retained him on four occasions between 1779 and 1791 to copy Tudor paintings. Two clients wanted illustrations for their books, Gilbert White for his Natural history and antiquities of Selborne (1789), a month’s work in 1776, including small assignments for several neighbours, and Henry Penruddocke Wyndham (1736-1819), with whom he travelled for three months in 1777, for the second edition of A gentleman’s tour through Monmouthshire and Wales (1781). Lord Scarborough evidently commissioned views of his Yorkshire estates in 1781. Three ‘worthy friends and employers’ of many years’ standing Grimm named in his will. Cornelius Heathcote Rodes (1755-1825) of Barlborough Hall in Derbyshire knew Grimm in 1773 and employed him from at latest 1780 and for several months in 1785, to sketch in the Chesterfield area. Most significant of the three was Dr Richard Kaye (1736-1809) who, as the King’s Sub-Almoner, commissioned pictures of the Maundy Ceremony in 1773 and gave Grimm frequent employment for the rest of his life. Kaye’s collection, in British Library, Add. MSS 15537-48, runs to some 2,500 finished pictures. The counties most represented reflect Kaye’s succession of ecclesiastical preferments, in Nottinghamshire, the north-east and Lincolnshire, and, in 1788-90, tours during summer sojourns at West Country health resorts when Grimm acted as artist-companion.

The third worthy friend was William Burrell. Grimm was well-established when Burrell first employed him, in 1778, as ‘the very eminent artist’ to copy the Lamberts’ survey pictures of Herstmonceux. In 1775 Burrell had started to employ the Lamberts in earnest and continued to do so until 1784. From 1780 Burrell regularly employed Grimm as well. Necessarily the arrangements were different. The Lamberts were Sussex residents, working almost exclusively in the county for many clients, each on a small scale, and already with a stock of local views. The Lamberts may have worked for Burrell around other commissions. In 1780, when Burrell had done the great bulk of his reading, archival research and church visiting, he may have felt that the Lamberts’ rate of progress was too slow and a more systematic approach was needed. So the Lamberts were allowed to continue for a few more years, but in addition Grimm was hired to tour the county for a fortnight or so each year from Whitsun, from 1780 until 1791, except 1786, though he happened to be at Cowdray that year, copying the Coronation Procession of Edward VI for the Society of Antiquaries. For at least part of each tour in 1780-4 and 1787 Grimm was accompanying Burrell.

Field-sketches, of which there are 143, most dated, in the Bodleian Library, allow some annual tours to be reconstructed. In 1781, for example, Grimm travelled from London to Rusper (making 1 drawing; Burrell was also there) and Horsham (5 at the church) on Saturday 2 June, the following day being Whitsunday, to Steyning (5) and Wiston (6) on Monday, returning to Steyning for the night, then through West Tarring (2), Goring (1) and Lyminster (1), to Arundel (10, continuing work on the castle started the previous year) where he stayed Tuesday and Wednesday nights, passing through Slindon (2) to reach Boxgrove Priory (15) on Thursday, continuing to sketch there on Friday. The next date is Thursday 14 June, but probably all that week was spent in Chichester (28), with a side-trip to Halnaker House (3) on the Friday, before departure north and east, perhaps on Monday 18 June through West Dean (2), Cowdray (2 of the exterior: the interior was to be drawn the following year) and Tillington (1) to Petworth (where he had sketched the previous year)—a total of 84 drawings over 13 working days. 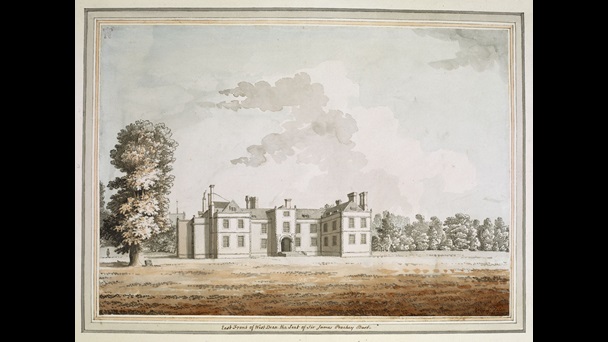 Samuel Hieronymus Grimm made drawings in Sussex for William Burrell in the 1780s.