What is a travel print?

Douglas Fordham looks at the complex role printed illustrations played in the making, meaning, and marketing of British travel literature in the 18th and 19th century.

Travel narratives are at least as old as Homer’s Odyssey, although they took on a distinctively modern form in the age of exploration, when published accounts of sailors, travellers and imperialists became a flourishing genre within the European book trade. Equally important to the genre were accounts of Continental and domestic tourism, not least of which was the Grand Tour, which typically culminated in a visit to the sites of Ancient and Modern Rome. While the Grand Tour could unite Europeans in a cosmopolitan appreciation of Classical art and antiquities, travel narratives beyond Europe’s borders often took on a competitive, nationalist edge. Napoleon’s invasion of Egypt beginning in 1798 offers a paradigmatic case, resulting in a steady stream of travel narratives, often translated in English and German, that enthralled Europeans while arousing anxieties about the conjunction of trade, conquest, exploration and cultural appropriation.

In Britain, the published travel account became a staple of the 18th and 19th century publishing trade, with publishers like John Murray in London specialising in the genre during the late Georgian period. The growth of travel literature can be attributed to an array of factors including a decline in publishing costs, growing literacy rates, an increasingly global communications network, and a populist nationalism that took great pride in the discoveries and conquests made by compatriots. By 1800 travel writing had become one of the most popular genres in British circulating libraries right alongside the English novel. Indeed, travel literature could be viewed as a serialised romance novel in which the British nation found its place in the world.

Printed illustrations played a complex role in the making, meaning, and marketing of British travel literature. The quality and quantity of topographic and proto-ethnographic illustration that filled the pages of these publications also set British travel literature apart from its Continental neighbours. In the 17th and 18th centuries, travel illustrations were nearly always etched or engraved by professional printmakers in London. As an intaglio printing process, etchings and engravings required the intense pressure of a rolling press, and they were printed separately from letterpress text. The printer would then note where single sheet prints should be bound between the letterpress pages of a book. When considering the 'travel print' it is helpful to keep the mediation of the printmaker in mind, for he (and less often she) helped to translate the sketches and watercolours of travelling artists into printed images that appealed to the expectations of the reading and viewing public. The paradox of the travel print, until the mid-19th century, was that this peripatetic art was the product of urban, industrial, and largely immobile print processes. One question that can be asked of the travel print, therefore, is to what degree it represents the experience of the travelling artist versus the conventions and assumptions of metropolitan printers. 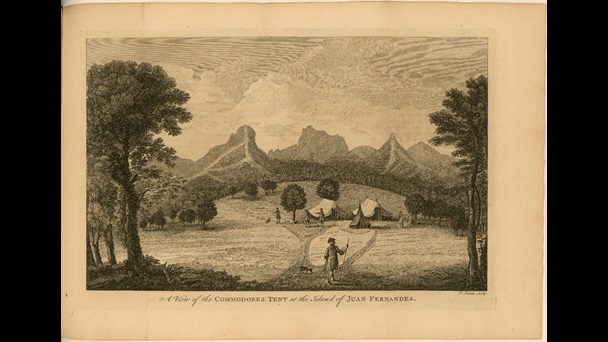 George Anson’s Voyage Round the World

One of the first blockbusters of English travel literature was George Anson’s Voyage Round the World. Originally published as an elegant folio volume in 1748, the book went through no fewer than 15 legal editions, to which could be added pirated versions from Dublin and elsewhere. As with most successful publications, the great illustrated folios often spawned cheaper octavo and duodecimo editions with fewer or cruder illustrations.1

The original illustrations to Anson’s Voyage were orchestrated by Arthur Pond, a painter, printseller and art dealer who left behind a rich archive of journals and estate papers now in the British Museum. While Pond may have executed a few of the 42 pages of intaglio illustrations, a team of six engravers executed the bulk of the work. The entire project took four years to complete, and Pond received a respectable, but hardly lavish, £200 for his efforts.2 Most of the Anson illustrations are sea charts and topographic coastal views, which was typical for travel publications at the time. John Barrow, the great impresario of printed travel narratives in the first half of the 19th century, noted that 'a book of Travels without a Map is very unsatisfactory and unintelligible'.3 Anson’s Voyage also contained natural history and topographic illustrations, including A Sea-Lion and Lioness and A View of the Commodore’s Tent at the Island of Juan Fernandes.

It is interesting to consider what a contemporary viewer learned from such a print. Located roughly 400 miles off the coast of Chile, the Juan Fernandez Islands were named after the 16th century Spanish sailor who discovered them.

They are best known as the island chain on which Alexander Selkirk became marooned in the first decade of the 18th century, which may have inspired Daniel Defoe’s Robinson Crusoe (1719). Engraved by James Mason, the print locates the viewer at a confluence of well-worn footpaths leading to the tent encampment in the middle ground. The accuracy of the print is less important, in some sense, than the invitation to wander imaginatively through the scene, accompanied by the printed text of Anson’s voyage. The engraving with its conventional linear syntax and composition, what William Ivins called 'the net of rationality', makes it extraordinarily difficult to discern distinctive flora, weather patterns, or anything else that would differentiate this part of the world from another. The jagged mountain profile alone helps to distinguish this island from others. Like Defoe’s novel, this print is less interested in the 'native' appearance of the land than in the ability of Crusoe and Anson to render it comfortable and amenable to their own ends. 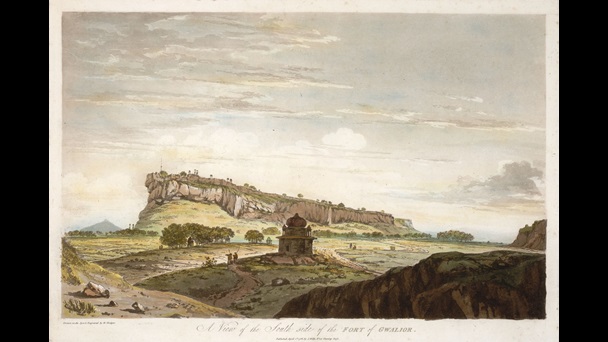 British India created professional opportunities for artists like William Hodges: as the colonies expanded, the market for Indian pictures among British consumers increased

Advances in print and travel

The invention and application of aquatinting marks an important development in the travel print, and one that made it possible for the intaglio printmaker to render the subtle atmospherics of watercolour in tonal washes of grey. Just one decade after Paul Sandby popularised the new technique in England, William Hodges published Select Views in India, drawn on the spot, in the years 1780, 1781, 1782, and 1783, and executed in aqua tinta. Trained by the landscape painter Richard Wilson, William Hodges was part of a new generation of professional artists to leave Europe behind in search of new vistas. Having served as the official artist of the second Captain Cook Expedition, Hodges then set off for India after securing permission from the East India Company. London printmakers turned Hodges’ paintings and watercolours into evocative aquatint prints. When bound together, usually by the consumer rather than the publisher, Select Views in India combines immediate atmospheric effects with Indian architecture and ruins, evoking a fallen empire that the East India Company would revive through a new political, economic, and aesthetic order. 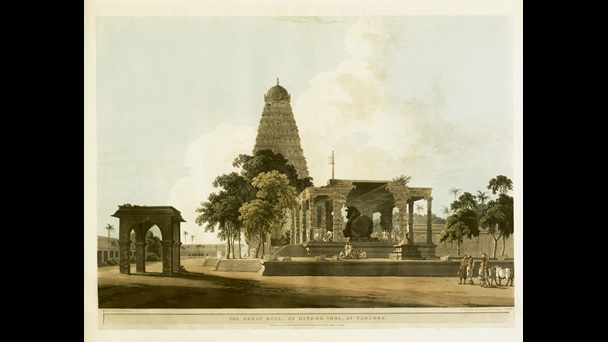 Thomas and William Daniell followed in Hodges’ Bengali footsteps a decade later, and then travelled further afield, departing from the other Presidency towns of Madras and Bombay.  While Hodges considered himself a painter, Thomas Daniell applied to the East India Company as a printmaker, and it was the Daniells who pioneered a new profession that combined the roles of artist, traveller, and printmaker. The result of their Indian journeys was the monumental six-volume Oriental Scenery published between 1795 and 1808. Insisting on the topographic accuracy of their scenes, often aided by a camera obscura, the Daniells cut out printmaking middlemen to produce tonal prints that offered an unprecedented immediacy. In practice, these views were mediated by reproductive medium, picturesque conventions, and the polite expectations of the English consumer. But they set a very high bar from the production of travel narratives that were primarily visual, and fully 'authored', at every stage of the process, by the artist.

Imperial travel and representation were primarily male endeavours, but a few women managed to carve out remarkable careers within this masculine professional sphere. Maria Graham published her Journal of a Residence in India, 1812, which launched a remarkable authorial career that included a series of publications related to her travels in South America in the 1820s.[4] While not a professional artist, Graham had etchings made after her drawings for inclusion in many of her publications.

The desire of authors to include their own illustrations in travel narratives, even amateur efforts, was greatly facilitated by lithography, invented in the 1790s and widely adopted by the 1820s. While lithographic printing involved a complicated chemical process, virtually anyone could draw or paint an image directly on the lithographic stone. A printer could then handle the technical reproduction, which could be printed in virtually unlimited numbers (unlike intaglio prints which yielded a limited number of high quality reproductions). The liberating effects of lithography are particularly evident in J.M. Gonsalves’s Lithographic Views of Bombay, which he published in Bombay in 1826 at the General Lithographic Press. Gonsalves had little training as a printmaker and he had neither the talent nor the connections to be reproduced by London printmakers. Lithography enabled him to undertake the publishing project himself, and to produce an early instance of Indian views in India for a primarily Anglo-Indian market. Lithographic presses sprung up across the colonial world in the 19th century, and travel prints increasingly relied upon the ease and cost-effectiveness of lithography. 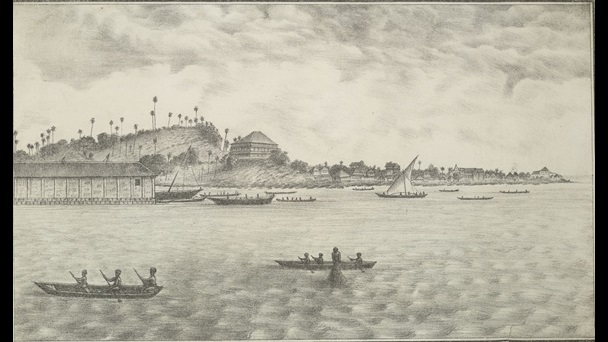 These lithographic prints were published in India, primarily for an Anglo-Indian market

The great limitation of intaglio and lithographic printing was that it could not be printed on the same page as letterpress text in a single printing. Thomas Bewick’s popularisation of 'wood engraving' in the late Georgian period, a relief printing technique in which high levels of detail could be carved from the endgrain of fruitwoods, eventually became the medium of choice for Victorian illustrated travel narratives. A particularly popular example can be seen in David Livingstone’s Missionary Travels and Researches in South Africa. And while wood engraving could be printed quickly and inexpensively in large print runs, it entailed a high degree of mediation from sketch to printed page, as a small army of London woodcutters worked away at their assigned tasks. As Livingstone complained to his publisher John Murray about this illustration, 'the lion encounter is absolutely abominable… Every one who knows what a lion is would die with laughing at it. … It’s like a dray horse over me. It really must hurt this book to make a lion look larger than a hippopotamus. I am quite distressed about it'.[5]

The Missionary’s Escape from the Lion 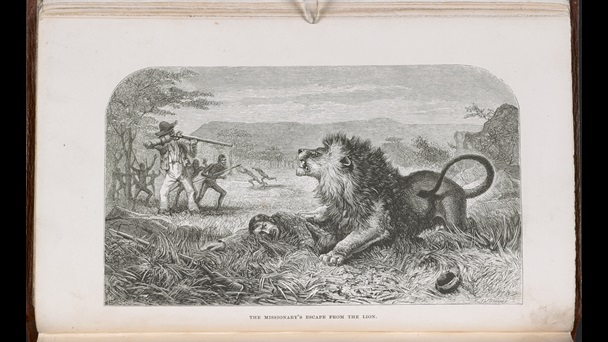 Photography, and its eventual reproduction through intaglio, planographic, and relief methods, further democratised and decentered the production of travel views. As image and text came to be printed seamlessly on the page, the notion of a 'travel print' recedes as a distinct entity.

The history of the travel print is primarily an 18th and 19th century story, and it is integrally bound to the conditions, limitations, and expectations of image reproduction. It is through these heavily mediated print processes that the world beyond Britain’s shores first came dramatically into view. More than 'eyewitness accounts' these visions of the world were a collaborative effort between travelling artists, metropolitan printmakers, commercial publishers, and an avid British public.

4: A fully digitised copy of Callcott's Journal of a Residence in India, etc can be viewed here.