An introduction to Jude the Obscure

Greg Buzwell considers how Hardy's last novel exposes the hypocrisy of conventional late-Victorian society, taking on topics such as education and class, marriage and the New Woman.

Jude the Obscure, the last completed novel by Thomas Hardy, received a mixed critical reception upon its publication in 1895. The novelist H G Wells in an unsigned piece for the Saturday Review eulogised ‘There is no other novelist alive with the breadth of sympathy, the knowledge or the power for the creation of Jude’.[1] In stark contrast the reviewer in the Pall Mall Gazette renamed the book ‘Jude the Obscene’, and branded the book a work of ‘naked squalor and ugliness’.[2] The Bishop of Wakefield went even further, being reputedly so disgusted by the novel he threw his copy into the fire. Even Edmund Gosse, a generally sympathetic critic of Hardy’s work and a personal friend, was given to reflect: ‘What has Providence done to Mr Hardy that he should rise up in the arable land of Wessex and shake his fist at his creator?’[3]

It is easy to see the reasons underlying the book’s critical mauling at the hands of conservative Victorian society, as well as its more positive reception from those, like H G Wells, at the vanguard of a new generation of intellectuals. Jude the Obscure attacks the hypocrisy and double-standards inherent in late-Victorian attitudes towards class, education, the role of women and marriage. At the same time, the book reveals the lie behind the widely held Victorian belief – as expressed for example in Samuel Smiles’s bestseller Self Help (1859) – that hard work, talent and application were in themselves sufficient for individuals to achieve success and advancement. Jude studies tirelessly to realise his ambitions but an indifferent Fate, allied to society’s entrenched attitudes towards the working classes, condemn his efforts to failure.

Education provides the means for upward social mobility but, in doing so, it also challenges the established order that gives advantages and privileges to those already at the higher end of the class system. From the 1870s this had been a reason for Oxford University in particular to hold back the spread of adult education to the working classes in an effort to protect the already over-crowded middle-class professions. Jude meets nothing but resistance from the authorities at Christminster – Hardy’s fictional name for Oxford – in his pursuit of education and social improvement. When he writes to the college masters for advice he receives but a single reply, a brief letter from the Master of Christminster’s Biblioll College stating that, judging from Jude’s description of himself as a working-man, ‘I venture to think that you will have a much better chance of success in life by remaining in your own sphere and sticking to your trade than by adopting any other course’ (Part Second, ch. 6). In other words the advice from Christminster is that the working classes should remain working class.

Access to Oxford and Cambridge at this time also required a detailed knowledge of classical Greek and Latin texts, both taught intensively at expensive public schools. Jude’s attempts to teach himself Latin and Greek from various primers, although admirable, were never going to put him on an equal footing with those who could afford an expensive education. Again middle-class rules and middle-class money acted to keep the working classes in check. Even though change was looming – Ruskin College, established with the aim of providing educational opportunities for working-class men denied access to university, was founded in 1899 – the possibility of Jude, and people like him, gaining economic mobility out of the working class via education remained unlikely.

Oxford and Working-class Education, a report 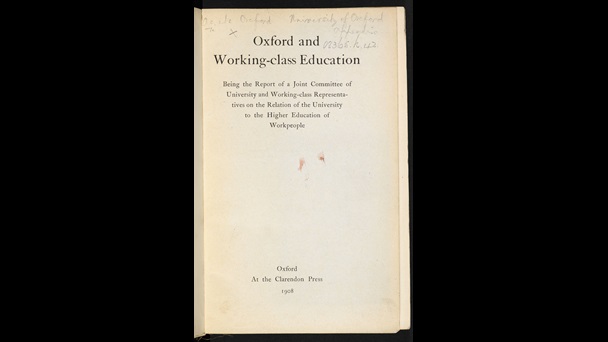 Oxford and Working-Class Education is a 1908 report from a committee looking at the potential for artisans and mechanics to study at Oxford University.

Marriage, and the role of women

If the dominant theme in the first part of the novel is education, then the focus in the second is marriage and the opportunities available to women in a largely patriarchal society. Jude the Obscure addresses the horrors of sexual relationships devoid of love; the consequences arising from ignorance about sex, and the unenlightened view held by society and the Church that an unhappy marriage was preferable to a loving, sexual relationship outside of wedlock. It also explores society’s attitude towards women as they attempt to secure financial security for themselves – either via marriage or the pursuit of a career.

Two women play a key role in the exploration of these ideas, and each highlights in a different fashion the choices faced by women at the time: Arabella Donn – seductive, intelligent but uneducated, manipulative and a born survivor; and Sue Bridehead, Jude’s cousin – intelligent, free-spirited (her love of Edgar Allan Poe’s poem ‘The Raven’ is indicative of her unconventional tastes). Sue’s ability to support herself financially via her career as a teacher, and her opposition to marriage marks her out as someone readers at the time would have readily labelled a ‘New Woman’.

Arabella Donn and the pursuit of a husband

Jude first encounters Arabella when she interrupts his daydream about becoming a Doctor of Divinity by throwing a pig’s penis at him. Sexuality, in the form of Arabella’s choice of missile, literally hits Jude on the head and diverts him from his scholarly pursuits. Throughout the book Arabella takes a pragmatic and direct approach to life. To secure her future she desires a husband who will provide for her. Seeing Jude as a suitable candidate, she seduces him and ultimately traps him into marriage. Later, after becoming frustrated at his inability to provide the level of financial security she requires, Arabella emigrates to Australia and enters into a bigamous marriage, again with a view to securing financial security in the process. Hardy’s portrayal of Arabella as a promiscuous woman using her sexual desirability to trap men – behaviour, it could be argued, society had helped create through its limited career opportunities for women – caused outrage. The novelist Margaret Oliphant described Arabella as ‘a human pig … quite without shame or any consciousness of any occasion for shame’.[4] It was common in literature to show fallen women as suffering and, indeed, as often paying the ultimate price for their immoral behaviour by throwing themselves to their deaths in a river in a symbolic act of cleansing. Arabella’s adeptness in using her sexuality to secure husbands and survive, without showing any signs either of guilt or disease as a result of her promiscuous activities antagonised conservative Victorian opinion. In an elegant twist at the conclusion of the book, Arabella does indeed go down to the river but not to drown herself. She goes there in search of another husband. 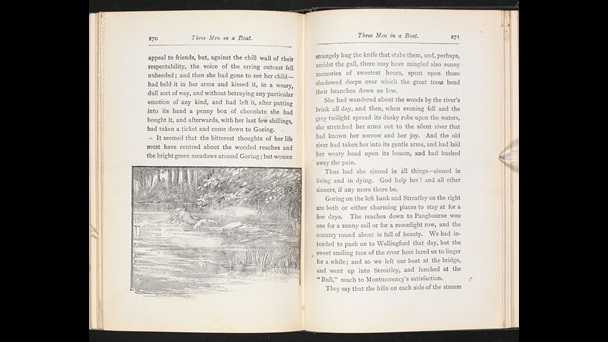 Three Men in a Boat (1889) by Jerome K Jerome is a humorous novel about a rowing trip on the Thames undertaken by three young men. In this section their tour is interrupted by the discovery of the body of a woman - an unmarried mother - who has drowned herself because of the shame society places on her.

Sue Bridehead and the New Woman

Marriage in Jude the Obscure frequently becomes trivialised through the farcical events surrounding it. When listed in stark fashion, all the marriages contracted in the novel involve deceit, social necessity or a compulsion to conform to religious dictates. Jude marries Arabella, believing her pregnant. Arabella leaves Jude and contracts a bigamous marriage when Jude’s dreams of a remunerative career come to nothing. Sue marries the school teacher Phillotson, whom she finds physically repulsive, partly out of spite at Jude concealing his marriage to Arabella. Phillotson out of kindness divorces Sue. Jude and Sue subsequently live together out of wedlock and thus incur the disgust of Victorian society. Later Sue returns to Phillotson in a perverse act of self-punishment brought about by guilt at the death of her children – a tragic event she regards as a form of divine retribution for her ‘modern’ ways. Everywhere in the novel marriage is seen as an artificial construct propped up by the Church and leading to misery and deceit, while living together outside of marriage invariably leads to ostracism from respectable society.

Of all the characters in the novel it is Sue who is the most outspoken in her attacks on marriage. She describes marriage as a ‘hopelessly vulgar’ institution, and observes ‘the flowers in the bride’s hand are sadly like the garland which decked the heifers for sacrifice in old times’ (Part Fifth, ch. 3; ch. 4). She also voices the opinion, one which lies at the heart of the novel, that ‘it is foreign to a man’s nature to go on loving a person when he is told that he must and shall be a person’s lover’ (Part Fifth, ch. 1). In other words, the vows taken to love and to cherish during a marriage ceremony cannot possibly hold over a lifetime given that one’s attitudes, desires and emotions towards one’s husband or wife are bound to change over time.

The Morality of Marriage 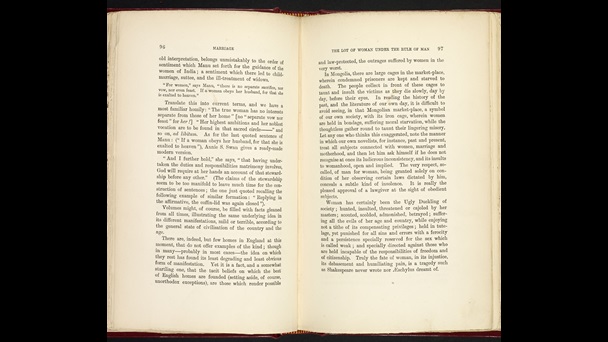 Mona Caird’s 1888 essay 'Marriage' argued that marriage was a system that trapped and abused women. The essay provoked a series in the Daily Telegraph called ‘Is Marriage a Failure?’ which elicited 27,000 letters from readers.

Jude the Obscure, like the characters within its pages, was ahead of its time. Its sympathetic portrayal of Jude, a young working-class man struggling against entrenched attitudes; of Arabella, attempting to secure a stable future for herself via a cynical approach to marriage; and of Sue Bridehead whose free-spirited independence is ultimately broken by the unyielding nature of conventional opinion; all of these look ahead to the work of D H Lawrence, particularly Sons and Lovers (1913) and Women in Love (1920). The clash between spirit and flesh, together with society’s attitudes towards class, had been common themes in Hardy’s work before but in Jude the Obscure they find their most impassioned analysis. As Jude comments at the end of the novel regarding his unmarried relationship with Sue, which only brought condemnation: ‘As for Sue and me when we were at our best, long ago – when our minds were clear, and our love of truth fearless – the time was not ripe for us! Our ideas were fifty years too soon to be any good to us. And so the resistance they met with brought reaction in her, and recklessness and ruin in me!’ (Part Sixth, ch. 10). Jude and Sue fail in their ambitions and their pursuit of happiness not through their own lack of desire and ambition, but through the unyielding attitudes of the time.