An introduction to Mary Barton

The 1848 title page of Mary Barton did not divulge the identity of the author. It was a common enough practice, and had been popularised early in the century by Walter Scott (‘the Great Unknown’).

The lengthy quotation on the title page of the book is from Thomas Carlyle – the most authoritative ‘sage’ of the age.[1] It comes from his 1832 essay on Scott, in which he grudgingly conceded there might, after all, be something useful behind fiction’s falsities - not much, of course, but something. Carlyle, although no friend to fiction, went on to be a moving spirit behind what was called the ‘social problem novel’ or, borrowing his phrase, ‘the Condition of England’ novel. 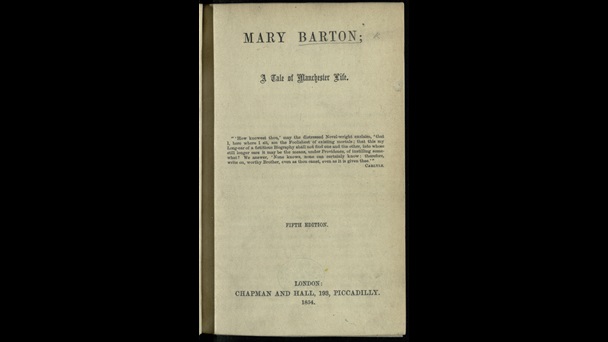 Mary Barton was published in 1848. In the novel, Elizabeth Gaskell sets out her commitment to urban realism, portraying the rapidly-industrialising Manchester of the 1840s.

At the time when Gaskell’s ‘Tale of Manchester Life’ was published, Manchester had come to be regarded as one of the seven wonders of the modern world. It was the engine room of the Industrial Revolution.

But in the ‘hungry forties’, it seemed the engine might have stalled. Crop failures across Europe had resulted in huge distress. Potato blight in Ireland caused mass starvation and the death or emigration of millions. Trade too was in the doldrums. Principally because workers, newly unionised, wanted a larger slice of the Industrial Revolution cake: better than poverty wages. Strikes and lockouts were particularly ferocious in Manchester. It was here, in the hungry forties, that Karl Marx and Friedrich Engels conducted their great analysis, which resulted in the latter’s Condition of the Working Class in England (1845). The worse things got, from their point of view, the better. Gaskell took a different, Christian view. On one thing, however, they agreed. The ‘condition’ was dire. During the period they and Gaskell were writing, over half the 150,000 work force in Manchester was unemployed or on short time. It was dangerous. 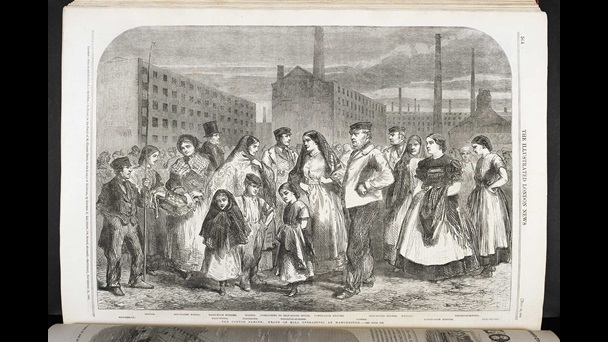 This illustration shows a group of struggling, disatisfied workers gathered outside a Manchester cotton mill.

‘The Year of Revolution’

1848, when Mary Barton first saw print, is known by historians as ‘the Year of Revolution’.

Britain dodged the bullet – just. There were no barricades or gutters running with blood. It was a close run thing. The revolutionary impetus in Britain was mobilised by the so-called ‘Chartist’ movement. Chartism came into being in the North of England, specifically Manchester.

The charter itself contained six demands of which the most seditious were universal franchise for men over 21, abolition of property qualifications for the vote, payment of MPs and a secret ballot for voters. All the demands have, thankfully, come to pass over the last century and a half – but they were incendiary stuff in 1848, and the authorities were determined not to give an inch. Chartist agitation climaxed, and collapsed, almost overnight, in 1848. Mrs Gaskell did her bit.

‘far above the ordinary garbage of novels’

Carlyle, in his magisterial way, approved of his words being used as the banner for a work of fiction. Mary Barton was, he grandly declared, ‘far above the ordinary garbage of novels’.[2] He graciously wrote to the author telling her that despite its ‘faults’ (a lack of ‘depth’ and ‘cohesion’) Mary Barton bore the stamp of ‘honesty and truth’.[3] Gaskell treasured the letter.

With this first novel and its successors (North and South, Cranford, Wives and Daughters, etc.) Gaskell quickly forged an identity. One word sums up that identity: ‘maternal’. For the Victorians, and for most of the 20th century, the author – once her anonymity was broken – was ‘Mrs Gaskell’. That was indelibly installed as the name on her title pages.

Since the growth of the women’s movement in the 1960s, she has been universally referred to as ‘Elizabeth Gaskell’. Understandable as the re-titling is, one can make a case for retaining the ‘Mrs’ prefix. Wifeliness and maternity throb at the heart of Gaskell’s fiction. She began writing Mary Barton in an attempt to console and distract herself from the post-natal depression and grief she experienced after the death of her only son, Willie, from scarlet fever. Her intention in the novel was, as her preface states, ‘to give some utterance to the agony which, from time to time, convulses this dumb people’. It was a handicap, she confessed, ‘that I know nothing of Political Economy, or the theories of trade’. But one thing she had in huge supply was womanly sympathy. Other writers of the period (mainly men) wrote social problem novels with more knowledge of social problems – Benjamin Disraeli, Charles Kingsley, Dickens – but none has the overwhelming well of human sympathy which floods through Gaskell’s work. In the novel's Preface, Elizabeth Gaskell mentions the suffering of the Manchester poor, 'doomed to struggle... between work and want' and, obliquely, her own suffering following the death of her son, saying that 'three years ago I became anxious (from circumstances that need not be more fully alluded to) to employ myself in writing a work of fiction'.

Who was Mrs Gaskell?

Who, then, was ‘Mrs Gaskell’? Elizabeth Stevenson was born in London, in 1810. Her father’s religious ‘doubts’ led him to giving up his position as a Unitarian minister and the family moving to the area around Manchester. ‘North and South’ would thereafter be the great polarity in Elizabeth’s life. Like other girls of Unitarian background, she was well educated at school, leaving at 17. In 1832 married the Reverend William Gaskell, a Unitarian assistant minister in Manchester. The union was to be very happy.

Mary Barton was an uncomfortable subject and Gaskell had difficulty finding a publisher for her first novel. It was eventually accepted by Chapman and Hall, Dickens’s publishers, for a measly £100 (she would be earning £1,000 a novel at the end of her career). She went on to write a string of popular works, establishing herself as the premier woman writer of mid-Victorian England. A mother to the end, Mrs Gaskell died of a sudden heart attack while visiting the house she had just bought for the family, surrounded by three of her daughters.

The dignity of working class life

It will help to summarise the novel. The narrative opens with an idyllic picture of John Barton, a mill worker, and his family enjoying a day’s well-earned leisure from the working week in the textile factories. Gaskell is at pains to emphasise the dignity of working class life. John’s daughter Mary is flighty but virtuous at heart. Barton is put out of work by the trade depressions that ravaged industry in the early 1840s.

A union man, John goes London to help deliver the great Chartist petition to Parliament but no good comes of it. His wife and children have, meanwhile, died of starvation, and cholera ravages the hovels of the workers. John takes to opium and assassination of the master who was his friend but has since risen and now persecutes him.

Gaskell’s first title for her novel was ‘John Barton’. He, she said, ‘was the person with whom all my sympathies went.’[4] But her publishers persuaded her to make the centre and climax of the novel Mary’s romantic entanglements. The novel which was conceived, and half written, as social realism merged into melodrama is about which of her suitors the heroine will marry. It was a shrewd change from the commercial point of view (these two volumes were, after all, intended for library subscribers). It may be thought wrong from the literary point of view.

What solutions does Gaskell propose for the salvation of the working poor of Manchester? Two. One, the Christian solution, is proclaimed by John Barton:

The rich know nothing of the trials of the poor; I say, if they don't know, they ought to know. We're their slaves as long as we can work; we pile up their fortunes with the sweat of our brows, and yet we are to live as separate as if we were in two worlds; ay as Dives and Lazarus. (ch. 1)

Marx and Engels would have agreed with this 100 per cent, except for the last five words. They did not foresee the future Communist utopia in the parables of the New Testament. Mrs Gaskell did.

Gaskell’s other solution is emigration. Mary Barton, with her true love, eventually ends up in the wilds of Canada, happily living in the woods. Emigration was certainly a safety valve (particularly in Ireland). But it was no more than that. It would take many painful years, and much more strife, before the ‘Condition of England’ attained a happier phase. Some would say it still hasn’t.

'The Depopulation of Ireland' from Illustrated London News 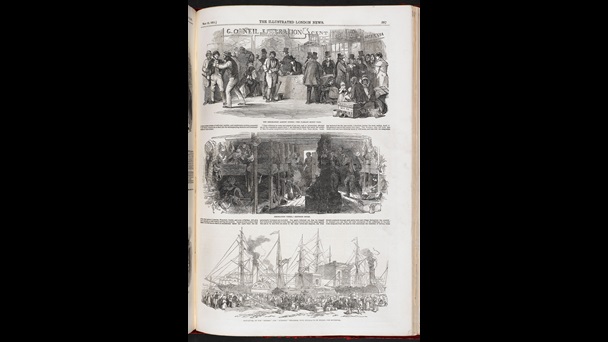 The mid-19th century was a time of mass emigration to Canada and America, especially from Ireland. These images in the Illustrated London News depict some of the experiences of those emigrating.

[1] The long title page quote runs: "'How knowest thou,' may the distressed Novel-wright exclaim, 'that I, here where I sit, am the Foolishest of existing mortals; that this my Long-ear of a fictitious Biography shall not find one and the other, into whose still longer ears it may be the means, under Providence, of instilling somewhat?' We answer, 'None knows, none can certainly know: therefore, write on, worthy Brother, even as thou canst, even as it is given thee.'"