An introduction to ‘Ozymandias’

Stephen Hebron looks at P B Shelley’s 'Ozymandias', showing how his use of form and vocabulary produce a poem that transcends its sources.

‘Ozymandias’ is one of Percy Bysshe Shelley’s best-known and most accessible poems. It was written sometime between December 1817 and January 1818, and was probably the result of a sonnet competition between Shelley and his friend Horace Smith, who stayed with the Shelleys at their home Marlow between 26 and 28 December. In such competitions two or more poets would each write a sonnet on an agreed subject against the clock. ‘Ozymandias’ was first printed in The Examiner on 11 January 1818; Smith’s sonnet, also entitled ‘Ozymandias’ was published in the same newspaper on 1 February. Shelley’s poem was the last of the ‘other poems’ he included in Rosalind and Helen, published in 1819.

In the poem a ‘traveller from an antique land’ describes to the poet the crumbling remains of a colossal statue he had encountered in the desert of an ancient Egyptian tyrant. The head of the statue, now lying on the sands, preserves the tyrant’s ‘sneer of cold command’; on the statue’s pedestal is a vainglorious inscription: ‘My name is Ozymandias, King of Kings; / Look on my Works, ye Mighty, and despair!’ Shelley wrote this line at the top of his original draft of the poem (Oxford, Bodleian Library, MS. Shelley e. 4, fol. 85v), and Horace Smith's rival sonnet has an almost identical phrase, so perhaps this was the cue for their competition. It is taken from a description by the classical writer Diodorus Siculus (fl. 60–30 BC) of the Theban monuments of Ramses II, who ruled Egypt for 67 years from 1279 to 1213 BC. In 1812 Shelley ordered a copy of Diodorus’s forty-book Bibliotheca historica (Historical Library), and in 1814 an English translation, The Historical Library of Diodorus the Sicilian, by George Booth, was published in London. Here the relevant passage reads:

One of these, made in a sitting posture, is the greatest in all Egypt, the measure of his foot exceeding seven cubitts . This piece is not only commendable for its greatness, but admirable for its cut and workmanship, and the excellency of the stone. In so great a work there is not to be discerned the least flaw, or any other blemish.

Upon it there is this inscription: – ‘I am Osymandyas, king of kings; if any would know how great I am, and where I lie, let him excel me in any of my works.’ (I, p.53)

The Historical Library of Diodorus the Sicilian 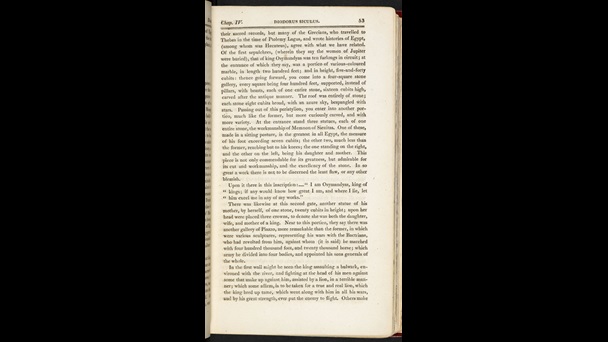 This translation of Diodorus’s history of the world includes the inscription for the statue of Osymandyas (also known as Ramses), which was the source for the finale of Shelley’s poem.

The fashion for Egypt

In England in 1818 all things Egyptian were in fashion – a few weeks after his sonnet competition with Horace Smith Shelley wrote a sonnet about the river Nile in friendly rivalry with Leigh Hunt and John Keats. For ‘Ozymandias’ he had a number of sources to draw on in addition to Diodorus, including Richard Pococke’s A Description of the East, and some other Countries (London, 1743), with its engraved plates and quotations from Diodorus, and other travel writings describing unsuccessful searches for the original statue. Ancient Egyptian monuments were arriving in England to the public’s great excitement, although the most famous of them, the colossal bust of Ramses II, did not go on display until after Shelley left England for good in March 1818, and so it cannot have directly informed the poem. In any case, ‘Ozymandias’ is primarily a product of Shelley’s imagination, not an attempt at historical reconstruction, and there are a number of differences between the sonnet and the description in Diodorus. The figure is standing, not sitting, and is to be found in a desert rather than a temple entrance.

Ramses II was a military conqueror and a great builder, but Shelley’s sonnet illustrates how the achievements of even the mightiest tyrants are obliterated by time. All that is left of this once all-powerful figure is a ruined statue in a lonely desert: ‘Nothing beside remains. Round the decay / Of that colossal Wreck, boundless and bare / The lone and level sands stretch far away’. Shelley lived in a period when the British government, fearful of revolution, took oppressive measures against radicalism. Habeas Corpus was suspended in 1817. His hatred of tyranny is well-known and was eloquently expressed in much of his prose and correspondence; but while political events occasionally prompted him to write a poem, most famously when he composed The Mask of Anarchy in response to the Peterloo Massacre in 1818, he never treated poetry as a vehicle for explicit political comment or moral argument. ‘Didactic poetry is my abhorrence’, Shelley wrote in the preface to Prometheus Unbound (1820), ‘nothing can be well expressed in prose that is not tedious and supererogatory in verse.’ Horace Smith’s sonnet on Ozymandias draws clear parallels between the rulers of ancient Egypt and the European monarchs of his own day, and concludes by imagining the annihilation of Regency London and its discovery by some future traveller. Shelley, by contrast, communicates a more implicit message through subtle literary effects.

Notwithstanding its probable origin in a domestic recreation, ‘Ozymandias’ is written with considerable skill. It attests to Shelley’s great literary gifts and is a realisation of his ambition, as he described it in the preface to Prometheus Unbound, to create new and beautiful ‘poetical abstractions’. The unconventional rhyme scheme joins the break, in the traditional Petrarchan sonnet form, between the first eight lines (the octave) and the final seven lines (the sestet). Internal rhymes and combinations of sounds (‘land’, ‘Stand’, ‘sand’, ‘hand’, ‘Ozymandias’; ‘trunkless’, ‘sunk’; ‘frown’, ‘Round’, ‘boundless’; ‘stone’, ‘lone’ ) convey a powerful but tightly controlled mood. The poem does not end with a moral truism, but with the simple, striking image of the desert sands.

The survival of creativity and the transience of tyranny

‘Ozymandias’ is as much about the survival of creativity as the transience of tyranny. Thanks to art, only the Pharaoh's arrogant passions, as expressed in the ruined statue, have survived, outliving both the sculptor (‘The hand that mocked them') and Ramses himself ('the heart that fed'), whose many monuments have reverted to 'The lone and level sands'. With a fine irony, Ozymandias’s proud boast to other rulers that he has no rivals (‘Look on my works, ye mighty, and despair!’) is fulfilled, but not in the way he would chosen: his statue causes other rulers to despair not because of his unrivalled achievements, but because it reminds them that they will share his inevitable fate.

‘Ozymandias’ received no special comment or critical notice when it was first published, but with its ringing phrases and striking imagery it has since found its way into popular culture to the extent that the name ‘Ozymandias’ immediately brings to mind the inevitable fate of the powerful. Most recently, the poem was a presence in the final episodes of the acclaimed American television series Breaking Bad, which charted the rise and fall of a ruthless drug lord. One of the most powerful episodes is called ‘Ozymandias’, and in the trailer to the series the protagonist reads the poem in full over a shot of the desert of New Mexico.