An introduction to Silas Marner: fairytale, realism and labour

Professor John Mullan explores how George Eliot draws on fairytale elements in her self-described ‘realistic treatment’ of a pre-industrial weaver and her work.

The opening sentence of George Eliot’s Silas Marner brilliantly combines the novel’s apparently conflicting aspects: its realism and its air of a fairy tale. It took its first readers back some 60 years to a pre-industrial era when ‘there might be seen in districts far away among the lanes, or deep in the bosom of the hills, certain pallid undersized men, who, by the side of the brawny country-folk, looked like the remnants of a disinherited race’ (ch. 1). These are the hand-loom weavers, and the novel both sees how they might have been shaped by their labour, and imagines them as mythical creatures out of a folk tale. 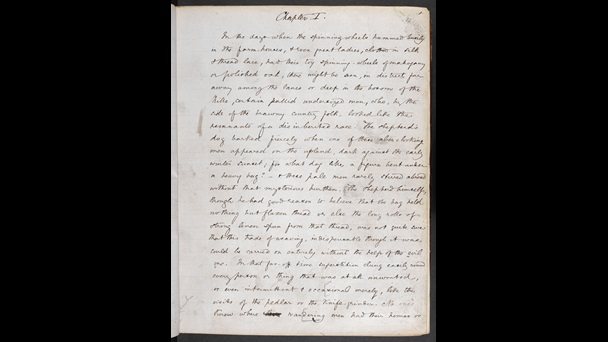 Silas Marner is a work of realism which incorporates many fairytale aspects. This is clear in its opening sentence, shown here in the manuscript of the novel.

Eliot was explicit about the mythical aspect of her novel. She told John Blackwood, her publisher, that ‘It came to me first of all, quite suddenly, as a sort of legendary tale, suggested by my recollection of having once, in early childhood, seen a linen weaver with a bag on his back; but as my mind dwelt on the subject, I became inclined to a more realistic treatment.’[1] She still gave her narrative some of the properties of a fairy story: the drawing of lots to decide a man’s fate, the miser with his bags of gold, the foundling child. After being unjustly cast out by his religious community in the town where he plies his trade, Silas Marner arrives at Raveloe as a mysterious outsider, and for the first half of the novel remains so. While the villagers pay him to weave linen for them, he becomes a figure of superstition, feared by the local children. He lives in solitude just outside the village, accumulating gold for his labours, growing ‘withered and yellow’ by the narrowness of his occupation (ch. 2).

When Silas enters the local inn, The Rainbow, to announce that his precious gold has been stolen from its hiding place in the floor of his cottage, the local men are drinking and talking about the abandoned stables at the Warren, which are supposed to be haunted. They are primed to see something supernatural; the pale thin figure of Silas, ‘with his strange unearthly eyes’, seems much like ‘an apparition’ (ch. 7). The miser has turned himself into a spectre in the eyes of the villagers. He will be humanised again by his love for Eppie, the tiny child who crawls into his cottage when her opium-addicted mother dies in the snow outside, and the movement of this narrative follows the satisfying pattern of a fairy tale. When Silas, made short-sighted by his years of labour, first sees the child by his fire, it is by the colour of her hair: ‘it seemed as if there were gold on the floor in front of the hearth. Gold! – his own gold’ (ch. 12).

In fact ‘the marvel’ is a sleeping child. There is a natural explanation for everything in the novel, and Eliot has been very careful to make its events probable, but she wants us to see how things can appear marvellous too. The shortness of the novel allows her to use the structure of a fable, and the characters themselves see events in these terms. Silas ‘could only have said that the child was come instead of the gold – that the child had turned into the gold’ (ch. 14). Even Godfrey Cass, rejected by his natural daughter when he comes to reclaim her, sees that he is part of such a narrative and tells his wife so. ‘I wanted to pass for childless once, Nancy – I shall pass for childless now against my wish’ (ch. 20). The villagers themselves turn the events of the novel into a modern folk tale. At the novel’s conclusion they ruminate on ‘Silas Marner’s strange history’ and agree that ‘he had brought a blessing on himself by acting like a father to a lone motherless child’ (Conclusion).

Yet the novel’s subtitle, ‘The Weaver of Raveloe’, draws attention to the influence of labour as well as Silas’s legendary status. Eliot was often interested in the work undertaken by the principal figures in her novels, and unusual amongst Victorian novelists in making many of these skilled labourers: Adam Bede is a carpenter, Felix Holt a watchmaker. Labour has formed many of the characters. In the scene in which Godfrey and Nancy visit Silas to offer to adopt Eppie, Eliot feels for the smallest sign of this influence. As Nancy assures her that she will want for nothing as the daughter of the squire and his wife, she grasps Marner’s hand firmly, noticing what we notice: ‘it was a weaver’s hand, with a palm and finger-tips that were sensitive to such pressure’. The detail, both psychologically and physiologically exact, is characteristic of Eliot.

In the early parts of the novel, Godfrey Cass and his feckless younger brother Dunstan are unusual in apparently having no work to do. Their idleness condemns them to vice and folly. In pre-Victorian English fiction there was no obvious stigma attached to being without employment. A ‘gentleman’ was usually, indeed, someone who did not have to work for a living. By contrast, few Victorian novels are without instances of the ennobling influence of work. One of the bestsellers of Eliot’s age, Samuel Smiles’s Self-Help is a celebration of ‘industry’ as a personal virtue and of ‘energetic’ labourers of every class. For Smiles, indolence is the ultimate vice.

Godfrey and Dunstan’s father has an estate to run, and almost everyone else in the village is defined by their occupation. Even Godfrey’s bride to be, the lovely Nancy, a farmer’s daughter, makes cheese and butter with her own hands. Yet, as in Adam Bede, the placing of the novel more than half a century back in time allows the novelist to free work from the taint of mechanisation or factory organisation. Near the end of the novel, Silas takes Eppie back to the town where he had once lived and finds, in place of Lantern Yard, ‘a large factory, from which men and women were streaming for their mid-day meal’ (ch. 21). This is the coming world, where labour is no longer individualistic and men and women are but particles in a stream.

The Manufacturing Population of England 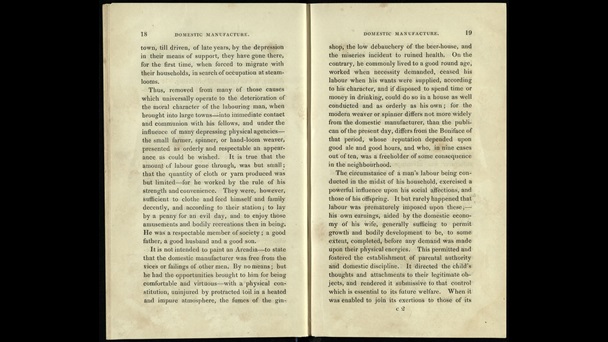 In The Manufacturing Population of England, Peter Gaskell describes the effect that industrialisation had on manufacturers. His description of the pre-industrial weaver, working in his own home rather than in a factory, and deeply connected to his friends, family and neighbours, recalls the character of Silas Marner once he has adopted Eppie and found a place in Raveloe society.