An introduction to The Hound of the Baskervilles

The Hound of the Baskervilles, the third novel by Arthur Conan Doyle to feature Sherlock Holmes, is arguably the most famous detective story in fiction. The tale was a huge success upon its first appearance in The Strand Magazine where it ran from August 1901 to April 1902. Indeed the story’s popularity was such that for the first (and only) time in The Strand’s history a seventh printing of the magazine was required in order to keep up with demand. The story of a seemingly supernatural hound that haunts Dartmoor caught the public imagination, pitting as it did the supremely rational Sherlock Holmes against the unearthly family curse that terrorises the Baskervilles. The novel also merged two popular genres, the detective story and the Gothic tale, using an ingenious double-narrative to do so. In addition, along with its late-Victorian Gothic predecessors Strange Case of Dr Jekyll and Mr Hyde (1886); The Picture of Dorian Gray (1891) and Dracula (1897) the book addressed many of the fears that assailed the final years of the 19th century.

The Hound of the Baskervilles was the first adventure to feature Sherlock Holmes since the tragic events depicted in the short story ‘The Final Problem’, published in The Strand Magazine in December 1893. In ‘The Final Problem,’ Holmes had apparently fallen to his death, along with his arch enemy Professor Moriarty, at the Reichenbach Falls in Switzerland. Arthur Conan Doyle, although worn down by the tight deadlines that went with writing the Holmes stories, and believing that the public’s fascination with the detective distracted attention from his more serious work, had left sufficient loose ends in ‘The Final Problem’ to enable him to bring back the great detective at a future date should he so desire. The Hound of the Baskervilles is set prior to the events at the Reichenbach Falls, but the book’s phenomenal success persuaded Conan Doyle to revive Sherlock Holmes permanently in ‘The Adventure of the Empty House’, a short story published in 1903 but set in the quintessentially ‘Holmesian’ setting of the Victorian fin de siècle. 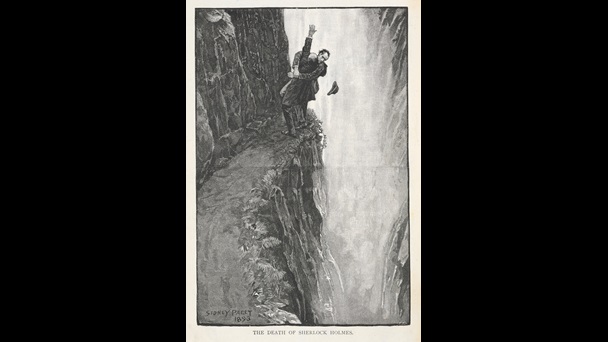 Paget's powerful illustration shows the apparent death of Holmes and Moriarty at the Reichenbach Falls during 'The Final Problem'.

By the time the first Sherlock Holmes novel, A Study in Scarlet, appeared in 1887 detectives had already begun to appear as central characters in popular fiction. The investigations of Inspector Bucket, for example, had played a large part in the plot of Charles Dickens’ novel Bleak House (1853), while Wilkie Collins’ book The Moonstone (1868) featured not only the established policeman, in the form of Sergeant Cuff, but also introduced the gentleman amateur detective in the character of Franklin Blake. A Study in Scarlet, however, took things to a new level, highlighting a modern, scientific approach to deduction. Holmes has an excellent knowledge of chemistry; he is able, for example, to distinguish between numerous different types of tobacco ash and he scientifically appraises crime scenes with a tape measure and a magnifying glass. Deduction from carefully collected clues and close observation was now a key part not only of the detective’s work, but also of the way in which detective stories were told and presented to the reading public.

One year prior to the appearance of A Study in Scarlet, Robert Louis Stevenson had published his Strange Case of Dr Jekyll and Mr Hyde which began the fin de siècle renaissance of Gothic literature, providing an imaginative means by which to explore contemporary fears including the unsettling implications of Darwin’s theory of evolution, and the growing fears that humankind was becoming both physically weaker and morally more degenerate in an increasingly decadent society.

The Hound of the Baskervilles combines both detective and Gothic genres, placing them side by side in an inventive fashion. The rational detective story takes centre stage whenever Holmes is present in the narrative. In these sections of the book a cool logic predominates and the bizarre events taking place on the moors surrounding Baskerville Hall are subjected to a cool, logical analysis. For much of the story, however, Holmes is absent, or so we are lead to believe. Early in the book Dr Watson accompanies Sir Henry Baskerville on his journey from London to Dartmoor while Holmes declines to travel on the grounds that other cases require his attention in the city. During this portion of the novel the events taking place on Dartmoor are narrated entirely by Dr Watson; and with Holmes apparently removed from the action the Gothic elements take over. Watson’s imaginative narrative teems with sinister touches and a cloying sense of fear and unease: Baskerville Hall itself is brooding, isolated and in a state of disrepair – a building that in many respects mirrors that most remarkable of all sinister Gothic piles, Edgar Allan Poe’s melancholy House of Usher; meanwhile a dangerous convict is at large on the moors and the nights are haunted by strange sounds and flickering lights. Landscape, atmosphere and legend combine for purely Gothic effect. One strand of the story, namely the plot to murder first Sir Charles Baskerville and then Sir Henry in order to obtain the Baskerville inheritance, belongs to the detective novel but the means by which the murders are to be carried out, involving folklore, a phantom hell-hound and a family curse, is pure Gothic.

Front cover for The Hound of the Baskervilles 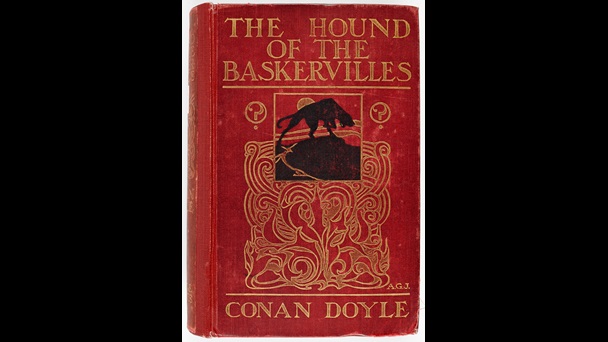 The Hound of the Baskervilles is arguably now one of the best known Sherlock Holmes stories.

Landscape plays an important role in Gothic fiction. Although the exotic late-medieval and Renaissance settings so beloved by authors such as Ann Radcliffe had given way to contemporary urban locations during the Victorian era, there was often still a place to be found for the louring, eerie and sinister house in the middle of a desolate tract of countryside. As a means of evoking a sense of dread and unease, an isolated mansion in the midst of fog-shrouded moorland is difficult to beat.

During The Hound of the Baskervilles the move from sophisticated modern London to an elemental landscape of remote moorland is carefully described. Dr Watson and Sir Henry Baskerville travel down to Devon by train and, gazing through the window, Dr Watson observes how the landscape becomes richer and more luxuriant. On arrival at their station Dr Watson notes:

‘Rolling pasture lands curved upwards on either side of us, and old gabled houses peeped out from amid the thick green foliage, but behind the peaceful and sunlit countryside there rose ever, dark against the evening sky, the long gloomy curve of the moor, broken by the jagged and sinister hills’ (Chapter 6)

Baskerville Hall itself lurks ‘like a ghost’ at the far end of a ‘sombre tunnel’ of overarching branches (Chapter 6). The appearance of the house is unsettling, being an edifice that presents in its architecture an uneasy amalgamation between the ancient and the modern. This jarring sense of the old and new being placed side by side is another typical characteristic of Gothic fiction.

‘The whole front was draped in ivy, with a patch clipped bare here and there where a window or a coat-of-arms broke through the dark veil. From this central block rose the twin towers, ancient, crenelated and pierced with many loopholes. To right and left of the turrets were more modern wings of black granite. A dull light shone through heavy mullioned windows, and from the high chimneys which rose from the steep, high-angled roof there sprang a single black column of smoke’ (Chapter 6)

The gloomy mansion has an illustrious history in Gothic Fiction with Thornfield Hall from Jane Eyre (1847), Wuthering Heights from Emily Bronte’s novel of the same name and Bartram-Haugh from Sheridan Le Fanu’s novel Uncle Silas (1864) being among the most remarkable of the many examples.

The Burden of the Past, and Anxiety about the Future

During the novel the past weighs heavily upon many of the characters. The curse of the Baskervilles which haunts the family line is first presented in a manuscript dating from 1742, and relates how the depraved activities of Sir Hugo Baskerville, and his drunken attempts to rape a young woman, result in his having his throat torn out by a gigantic hound. This sense of past family guilt being played out through subsequent generations is a common theme in Gothic fiction. A key way in which this is often represented is via the gloomy family portrait that, although showing the features of a distant ancestor, bears an uncanny resemblance to a present-day descendant. In Oscar Wilde’s The Picture of Dorian Gray for example, Dorian strolls ‘through the gaunt cold picture-gallery of his country house’ looking at ‘the various portraits of those whose blood flowed in his veins’ (Chapter 11). As he looks at the faces, and reflects upon their debauched activities the thought occurs to him that perhaps ‘some strange poisonous germ crept from body to body till it had reached his own’ (Chapter 11). Such reflections lead Dorian to suspect that perhaps he is damned by fate and hereditary characteristics just as much as he is damned by his own inflamed desire to pursue an increasingly depraved lifestyle. This idea of hereditary traits being passed from generation to generation plays a crucial role in The Hound of the Baskervilles – it is the similarity between a portrait of Sir Hugo Baskerville, the villainous ancestor with whom the curse originates, and one of the present-day characters in the novel that enables Holmes to solve the mystery.

The novel also highlights our inability to escape the past in other ways. The fugitive murderer Selden, for example, hides out on the moors in one of the many prehistoric stone dwellings that litter the landscape. This pairing of the criminal and the primitive early settlers in the area emphasises how our frequently violent and ancestry occasionally remerges in the present. The broken remains of the stone dwellings also act as a reminder of how previous attempts to tame the landscape have often ended in failure. The landscape even becomes a metaphor for the inexplicable in the modern world. As Dr Watson observes: ‘Life has become like that great Grimpen Mire, with little green patches everywhere into which one may sink and with no guide to point the track’ (Chapter 7). Holmes’s ability to solve the case may be regarded as a triumph for the modern world over the realms of mystery and superstition, but in a sense the larger mystery into the nature of criminality and evil remains, disturbingly, just beyond the limits of our knowledge and understanding.