An introduction to 'The Masque of Anarchy'

Professor John Mullan analyses how Shelley transformed his political passion, and a personal grudge, into poetry.

Percy Bysshe Shelley was living in Italy when news reached him of the Peterloo Massacre. On 16 August 1819 a crowd of well over 50,000 had gathered at St. Peter’s Fields outside Manchester to support parliamentary reform. The radical orator Henry Hunt was to speak in favour of widening the franchise and reforming Britain’s notoriously corrupt system of political representation, with its ‘pocket’ and ‘rotten’ boroughs. Magistrates ordered the Manchester Yeomanry (recruited from amongst the local middle classes) to disperse the demonstration. The cavalry charged the crowd, sabres drawn. At least 15 demonstrators, including a woman and a child, were killed, and many more wounded.

Lists of the killed and wounded from the Peterloo Massacre 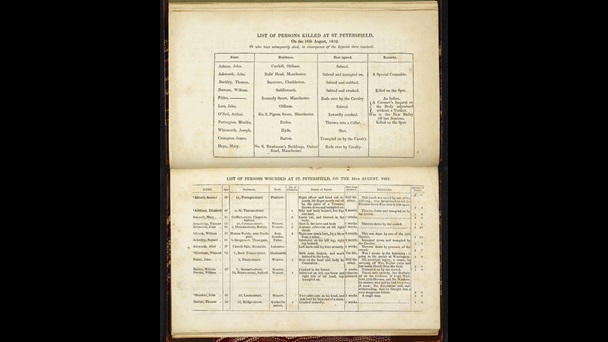 Report of the Metropolitan and Central Committee, appointed for the relief of the Manchester sufferers; it contains the names of those injured ‘and the nature and extent of their injuries, 1820.

The events of the day were widely documented and described. The businessman John Taylor, who had witnessed the aftermath, went on to set up the Guardian newspaper in response. And it was via newspapers, almost a month later, that Shelley found out what had happened. ‘The torrent of my indignation’, as he put it, flowed into The Masque of Anarchy. It was a poem devised to be accessible to a wide readership but doomed not to reach it. Though Shelley sent it back to England, his friend Leigh Hunt felt that it could not be safely published. So-called ‘Gagging Acts’ had been introduced to restrict published political protest. The perpetrators of the Massacre had been exonerated, but the organisers of the demonstration had been imprisoned. Shelley’s poem remained unpublished until the 1830s.

The poem is a prophetic dream, in which the political crisis of Regency England is turned into an apocalyptic vision. In the first part of the poem the nation’s leading politicians parade like monsters, leading the figure of Anarchy, on a white horse, to trample the multitude who adore him. In this vision, the true anarchists are Britain’s rulers, who delight in fear and disorder. Anarchy’s followers, who include ‘Lawyers and priests’, take possession of Palace, Bank and Parliament. They are challenged only by a ‘maniac maid’ called Hope, though ‘she looked more like Despair’.

Like the protestors outside Manchester, she is about to be trampled between the horse’s hooves when a shape arises like a mist to kill Anarchy, ‘the ghastly birth’. Now we hear ‘an accent unwithstood’ of a voice advocating Freedom and encouraging the people to seize it. We see ‘a great Assembly ... Of the fearless and the free’ assailed, like the Peterloo crowds, by the troops of their rulers. Yet their bayonets and scimitars are somehow defeated by the resolution of the people.

Manuscript of P B Shelley's 'The Masque of Anarchy' 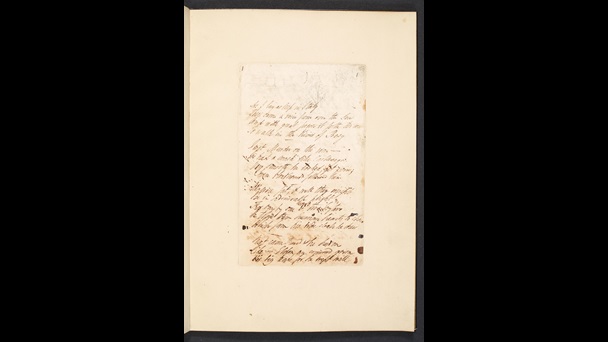 P B Shelley’s manuscript of ‘The Masque of Anarchy’, 1819, was a reaction of furious outrage at the Peterloo Massacre. An avowedly political poem, it praises the non-violence of the Manchester protesters when faced with the aggression of the state.

First publication of 'The Masque of Anarchy' by P B Shelley 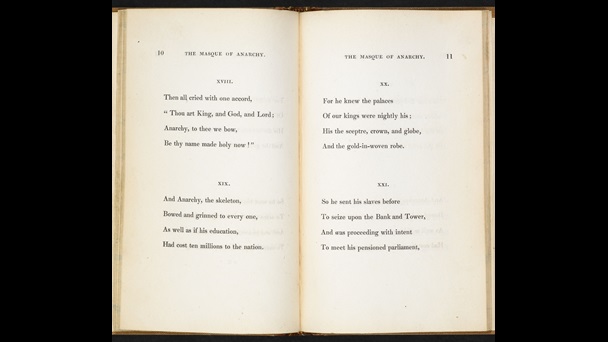 From the first publication of ‘The Masque of Anarchy’, 1832.

The title of Shelley’s poem refers both to a dramatic pageant (like the masques that monarchs staged to celebrate their power) and an organised deception (the ‘masquerade’ of those who conspire together to rule the country). As if to confirm this ambiguity, the poem was called ‘The Mask of Anarchy’ in manuscript, but ‘The Masque of Anarchy’ when eventually printed. The images of these gloatingly sinister men of power also recall contemporary caricatures, such as those of James Gillray, in which the nation’s rulers assume the grotesque shapes of their true desires.

The individual politicians are reduced to personifications of eternal vices.

I met Murder on the way -
He had a mask like Castlereagh -
Very smooth he looked, yet grim;
Seven blood-hounds followed him

Tory leader and Foreign Secretary Viscount Castlereagh was a spokesman for the harsh measures of political repression that followed the Massacre.

Next came Fraud, and he had on,
Like Eldon, an ermined gown;
His big tears, for he wept well,
Turned to mill-stones as they fell.

This was personal as well as political. Lord Eldon was Lord Chancellor. He had sat in judgement on the fate of Shelley’s children by his first wife, Harriet, after her suicide. He had refused Shelley custody because of his ‘immoral and vicious’ principles.

Shelley’s political passions were notorious and are still famous, but it was not these that made him a great poet. He was always trying out different verse forms; each new poem was a new experiment with rhyme and metre. The vision is recounted in the same stanzas as were used in popular ballads, and dizzyingly mixes poetic wit with furious hyperbole.

Other writers also used popular verse forms to express their indignation – anonymously, to avoid prosecution. One such published protest, which was hugely popular, was William Hone’s verse satire The Political House that Jack Built (1819), with George Cruikshank illustrations.

The Political House that Jack Built, a radical political satire by William Hone and George Cruikshank 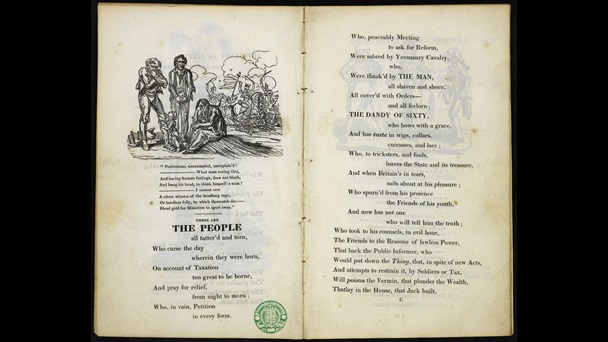 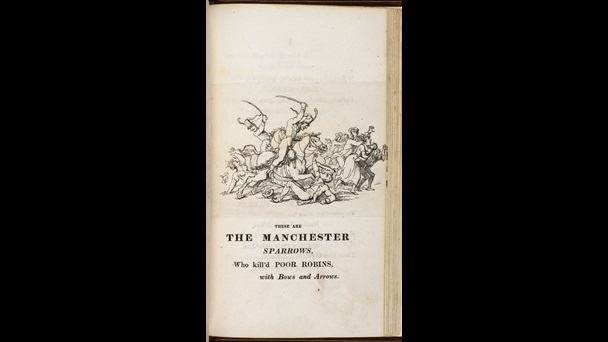 Who killed Cock Robin? A satirical tragedy, or hieroglyphic prophecy on the Manchester Blot!!!, 1819.

The caution of Shelley’s friends meant that his incendiary ballad was denied such immediate impact. Shelley died in 1822 and his widow, Mary Shelley, sent the manuscript to Sir John Bowring, political reformer and editor of the Westminster Review, in 1826. It is now held by the British Library. The poem was not published until 1832.