Five years have passed; five summers, with the length
Of five long winters! And again I hear
These waters, rolling from their mountain springs
With a soft inland murmur. Once again
Do I behold these steep and lofty cliffs,
Which on a wild secluded scene impress
Thoughts of more deep seclusion, and connect
The landscape with the quiet of the sky.

Wordsworth’s ‘Lines written a few miles above Tintern Abbey, on revisiting the banks of the Wye during a tour, 13 July 1798’ is the climatic poem of Lyrical Ballads (1798). Although Wordsworth and his circle commonly referred to the poem as ‘Tintern Abbey’, the significance of the full title is worth considering. Firstly, we are told that the poem is ‘written a few miles above Tintern Abbey’. The poem’s perspective on the abbey, therefore, is elevated and distant, and perhaps even detached. Secondly, we discover that the poet has been here before: he is ‘revisiting’ the Wye valley. Thirdly, we are informed that the poem was composed ‘during a tour’ – written, that is, during the course of a pleasure trip in which several different places of interest are visited. Finally, we learn the poem’s exact moment of composition: 13 July 1798. 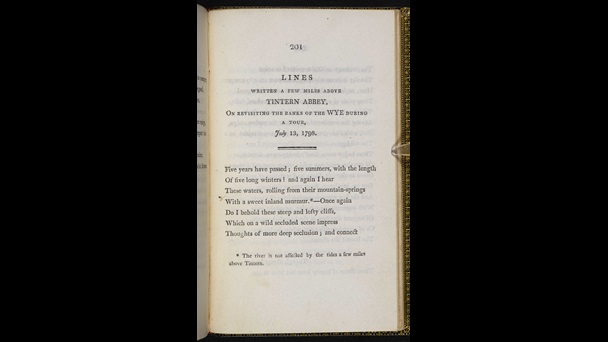 What should we make of the title’s eagerness to establish an exact time and precise place? In the poem’s opening lines we learn that the speaker is revisiting the Wye after a period of five years. The man who visited the region during a walking tour from London to North Wales in the summer of 1793 has changed significantly; at that time Wordsworth was an anxious, aimless and disillusioned young man: the father of an illegitimate child to a woman in revolutionary France, the recent author of two unnoticed poems, and a political radical beset with concerns about Britain’s entry into the war against France. Looking back on this turbulent period, the opening lines insist that then as now the poet receives a healing influence from nature: just as the ‘lofty cliffs … connect / The landscape with the quiet of the sky’, so the disunited perceiver of this scene is rejuvenated and made whole. To some degree, therefore, ‘Tintern Abbey’ presents absorption in natural beauty as the solution to mental, political and social disconnection.

The imagery of unity and connection in these opening lines is strongly influenced by William Gilpin’s concept of the picturesque. In Observations on the River Wye (1782) Gilpin notes that ‘Many of the furnaces on the banks of the river consume charcoal which is manufactured on the spot, and the smoke (which is frequently seen issuing from the sides of the hills, and spreading its thin veil over a part of them) beautifully breaks their lines, and unites them with the sky’. With its description of ‘wreathes of smoke / Sent up in silence from among the trees’ the elevated perspective of ‘Tintern Abbey’ casts a similar veil over a landscape rapidly succumbing to the effects of industrialisation. Gilpin goes on to document the ‘poverty and wretchedness’ of the homeless taking shelter in the abbey ruins; an image of social deprivation that the poem seems simultaneously to acknowledge and efface in its mention of ‘vagrant dwellers in the houseless woods’. 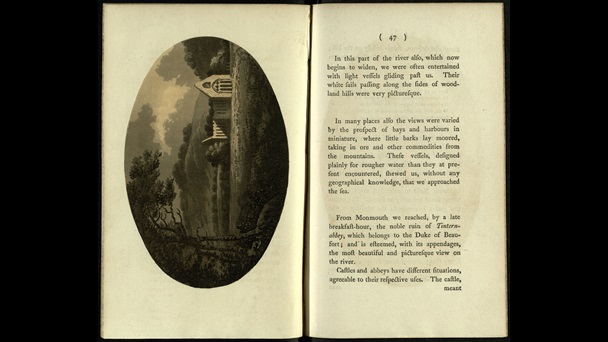 William Gilpin’s Observations on the River Wye and several parts of South Wales (1800) describes the picturesque qualities of the ruins of Tintern Abbey, and contrasts them with the miserable living conditions of those who worked nearby. 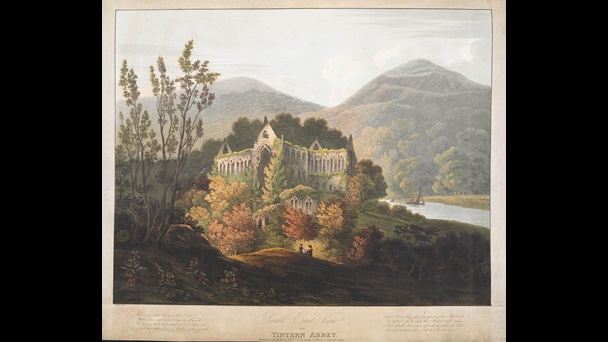 From Four Views of Tintern Abbey by Frederick Calbert (1815), in which the ruins of the Abbey are portrayed as a tourist or leisure site.

Seeing into the life of things

Like thousands of travellers before him, Wordsworth’s perception of the valley and its picturesque centrepiece is informed by the aesthetics of tourism and by the genre of the landscape poem. But ‘Tintern Abbey’ is distinguished from other writings on this subject written in the late 18th century by its complex integration of landscape description, self-reflection and sheer philosophical ambition. After the opening description the speaker claims that he owes to the memory of his initial visit ‘sensations sweet / Felt in the blood and felt along the heart’ that have calmed and restored him in difficult times. More daringly he states that the landscape has inspired ‘another gift, / Of aspect more sublime; that blessed mood / In which the burden of the mystery’ of the world is ‘lightened’ and, with ‘an eye made quiet by the power / Of harmony, and the deep power of joy, / We see into the life of things’. Wordsworth, that is, looks beyond surface appearance to gain insight into a deeper level of existence. Distinguishing the ‘coarse pleasures’ that his younger self took in the forms of nature from the sober reflections of his mature self, the poet states that he has ‘felt … a sense sublime’:

Of something far more deeply interfused,
Whose dwelling is the light of the setting suns,
And the round ocean, and the living air,
And the blue sky, and in the mind of man –
A motion and a spirit that impels
All thinking things, all objects of all thought,
And rolls through all things.


In contrast to the superficial unity of the picturesque, Wordsworth uses repeated connectives (‘And the round ocean, and the living air’) as a means of fusing mind and nature in a living whole. The ‘sense sublime’ that ‘rolls though all things’, including all ‘thinking things’ is, as many critics note, a pantheistic life-force, an echo of the ‘One Life within us and abroad’ celebrated by Coleridge in ‘The Eolian Harp’ (1795).

The language of my former heart

Here, on this triumphant note, the poem might have ended. But instead the poem introduces a new figure, the poet’s sister Dorothy. In Dorothy’s ‘wild eyes’ Wordsworth is able to ‘read’ his ‘former pleasures’. The sister, in whom the poet is able to ‘behold … what I once was’, thus serves as a final point of connection between past and present. With Dorothy established as a ‘dwelling-place’ for recollections of this moment in 1793, Wordsworth concludes ‘Tintern Abbey’ with a confident assertion of the ability of memory to overcome distinctions of time and space.