An introduction to ‘To a Skylark’

P B Shelley's 'To a Skylark' was inspired by the song of a real skylark, heard in Italy in 1820. Stephen Hebron considers how Shelley transforms ordinary experience into a plea to move beyond that experience to a deeper poetic understanding.

Shelley composed ‘To a Skylark’ in the summer of 1820, when he was living in Livorno, a town on the north-west coast of Italy. It is one of his most accessible and popular poems. He begins by praising the evening flight of the skylark, then looks without success for examples of equivalent beauty, and finally asks the bird to teach him its ‘sweet thoughts’.

In her note to the poem Mary Shelley traced its genesis to a particular summer evening: ‘while wandering among the lanes whose myrtle hedges were the bowers of the fire-flies … we heard the carolling of the skylark which inspired one of the most beautiful of his poems’. In an early poem, ‘Shelley’s Skylark’, Thomas Hardy imagined ‘The dust of the lark that Shelley heard’, and requests the ‘faeries’ to find it, together with a casket,

And we will lay it safe therein,
And consecrate it to endless time;
For it inspired a bard to win
Ecstatic heights in thought and rhyme.

‘To a Skylark’ is not, however, a description of a particular occasion, or a particular bird; rather, it is a search for something ideal and elusive, something which cannot, in the end, be captured in words.

Notes on P B Shelley's 'To A Skylark' 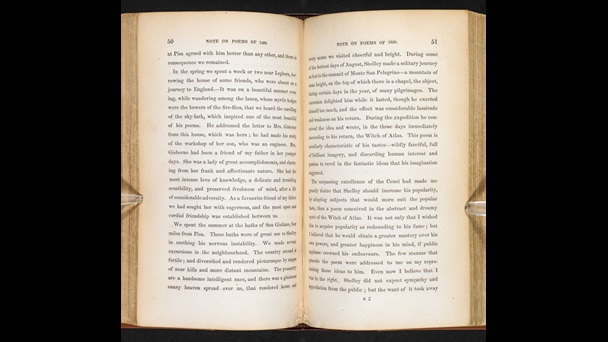 In The Poetical Works of Percy Bysshe Shelley (1839) Mary Shelley describes an evening walk while they were in Italy, which inspired Shelley’s ‘To a Skylark’.

The skylark only sings when it is in the air, and usually from such a height that it is invisible to the human eye. ‘Bird thou never wert’ writes Shelley of this unseen presence, which is not so much a physical form as a joyous, disembodied voice that soars in the ‘deep blue’, that floats and runs in the golden light of evening. Like the keen light of Venus, the morning star, it narrows ‘Until we hardly see – we feel that it is there’.

‘What is most like thee?’ Shelley asks the skylark. Its melody is like the hymns sung by ‘a Poet hidden / In the light of thought’; the love songs of ‘a high-born maiden / In a palace-tower’; the ‘aerial hue’ cast by a glow-worm over ‘the flowers and grass which screen it from the view’; the scent given by a rose when ‘By warm winds deflowered’; and the sound of rain ‘On the twinkling grass’. And yet, admits Shelley, ‘All that ever was / Joyous, and clear and fresh, thy music doth surpass’.

'To a Skylark' by P B Shelley 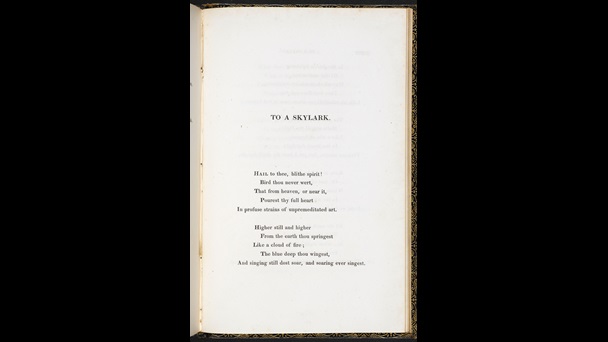 ‘To a Skylark’ was first published in 1820, one of a group of poems which also included ‘To the West Wind’, ‘The Cloud’ and ‘Ode to Liberty’.

Shelley consequently asks the skylark to teach him its thoughts, compared to which, he believes, mankind’s weddings songs (‘Chorus Hymeneal’) and chants of triumph would be no more than empty boasts. The bird appears to be blissfully free of those things that weigh down human life. It seems ignorant of pain, languor and anger, and must have a deeper and truer knowledge of death, ‘Or how could thy notes flow in such a chrystal stream?’ Should the skylark ‘Teach me half the gladness / That thy brain must know’, Shelley writes in the concluding stanza, it would bring him an ‘harmonious madness’ of the kind Plato describes in Phaedrus, which Shelley had read in May 1819: ‘If anyone comes to the gates of poetry and expects to become an adequate poet by acquiring expert knowledge of the subject without the Muses’ madness’, says Socrates, ‘he will fail, and his self-controlled verses will be eclipsed by the poetry of men who have been driven out of their minds.’[1] 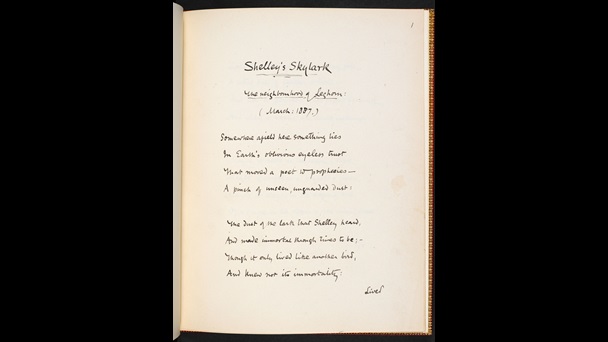 Thomas Hardy’s poem ‘Shelley’s Skylark’, written in 1887, celebrates the inspiration for Shelley’s poem, which led him to achieve ‘Ecstatic heights in thought and rhyme.’

‘Our sweetest songs are those that tell of saddest thought’

In ‘To a Skylark’ Shelley creates, through a series of fine images and similes, a most beguiling evocation of the skylark’s carefree, crystalline existence. Equally, he vividly evokes contrasting human characteristics:

And pine for what is not –
Our sincerest laughter
With some pain is fraught –
Our sweetest songs are those that tell of saddest thought.

Quoted on its own – as it often is – this famous stanza can seem sentimental and self-pitying, just as the poem’s lyrical images of earthly beauties can, when taken out of context, come across as rather meaningless. One can see why Matthew Arnold described Shelley as ‘a beautiful but ineffectual angel, beating in the void his luminous wings in vain’.[2] Read in its entirety, however, ‘To a Skylark’ brilliantly illustrates Shelley’s conviction that the human mind, and, by extension, human society, operates not according to fixed mental or emotional states, but to a constantly changing, and never resolved tension between the body and soul, the physical and the imagined, despondency and optimism, harsh reality and idealism. The joyous existence represented by the skylark is never seen, still less achieved, but it remains a vivid and keenly envisioned ideal. It is the process which matters, and Shelley’s great achievement in this and other poems is to capture this fluidity in poetic form. As he wrote in Prometheus Unbound (1820):

Language is a perpetual Orphic song,
Which rules with daedal harmony a throng
Of thoughts and forms, which else senseless and shapeless were.