Greg Buzwell explores the story behind Bram Stoker's adaptation of Dracula for the theatre.

1897 was a vintage year for the undead. It witnessed the first exhibition of Philip Burne-Jones’s controversial painting The Vampire which depicted a predatory female looming over a supine man, an image which in turn inspired Rudyard Kipling to write a poem on a similar theme, also called 'The Vampire'. It was also the year in which the author and spiritualist Florence Marryat published her novel The Blood of the Vampire in which the central character, Harriet Brandt, the daughter of a mad scientist and a mixed-race voodoo priestess, drains the life force from those with whom she comes into contact. Most enduringly of all, however, it was the year in which Bram Stoker unleashed his novel Dracula upon an unsuspecting world.

Today Count Dracula is one of literature’s most famous and instantly-recognisable characters. When it comes to portrayals of fictional figures on stage and screen, only Sherlock Holmes – another creation of the late-Victorian literary scene – has been represented more frequently. Given the Count’s considerable popularity for later generations, and given the proliferation of vampire fiction and imagery circulating in society towards the end of the Victorian era, it comes as something of a surprise to learn that only two paying customers attended the first ever performance of Dracula on stage, and that following this one-off performance in 1897 the character of the Count did not take to the stage again until 1924. Then again, in the finest tradition of Gothic fiction, appearances can be deceptive, and the bare details given above hide a more elaborate story. 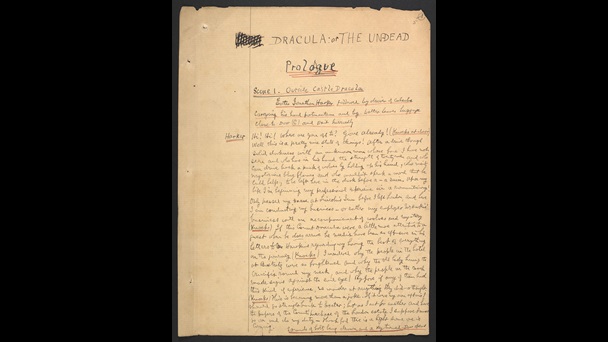 The opening scene from Bram Stoker's theatre version of Dracula, in Stoker's own hand, 1897.

Bram Stoker’s manuscript of the play

Until 1968 it was necessary, under the terms of the Stage Licensing Act of 1737, and the Theatres Act of 1843, for all plays intended for public performance to be submitted to the Lord Chamberlain’s Office for approval and licensing. The script of the theatre version of Dracula, which Bram Stoker submitted to the Lord Chamberlain’s Office in May 1897, provides a fascinating insight into the world of the late-Victorian stage as well as offering a glimpse into the origins of Count Dracula and the way in which Stoker explored the dramatic potential of his characters.

The script for the play consists of a mixture of Stoker’s own handwriting and printed extracts cut and pasted from a galley proof (i.e. a preliminary printing of a text on which authors, editors and publishers can add corrections and amendments) of the novel. Originally titled ‘Dracula: or The Un-Dead’ the play was hastily put together by Stoker in order to protect the dramatic rights to his book. By submitting the play to the Lord Chamberlain’s Office he was effectively ensuring he retained copyright over the characters and the plot of his novel in so far as their use on the stage was concerned.

The performance itself, held on the morning of 18 May 1897 at the Lyceum Theatre, London, consisted of a dramatic reading carried out by members of the Lyceum’s resident company of actors. The novel was published eight days later on 26 May. As was usual for copyright readings playbills advertising the performance were only put up outside the theatre a mere half hour prior to the time the play was due to commence. Unsurprisingly, given this deliberate lack of advertising, paying customers were thin on the ground with only two people buying tickets to sit in attendance alongside some of the Lyceum’s backstage staff and crew. The play comprises of a prologue and five acts, containing over forty scenes in total, and would probably have taken a numbing six hours to read. Of those taking the roles in the play, the most famous was Edith Craig who took the role of Mina Murray. She was the daughter of the actress Ellen Terry and an important pioneer of the women’s suffrage movement in England. To Stoker’s disappointment the actor Henry Irving took no part in the production. Irving was widely considered to be one of Stoker’s inspirations for the Count, due to his dark, brooding charisma and his gift for playing other-worldly figures such as Mephistopheles from Johann Wolfgang von Goethe’s play Faust. Legend has it that when Stoker asked Irving what he thought of the play the great actor replied with a single word – ‘dreadful’. 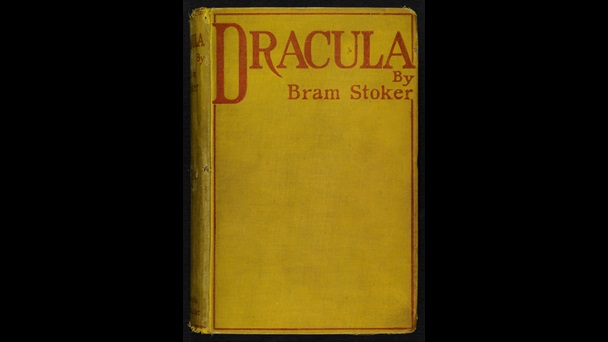 Front cover to the first edition of Bram Stoker’s novel Dracula, 1897. Yellow was synonymous with the more adventurous and transgressive elements of the Victorian fin de siècle - it was the colour of bruising and decay.

Comparison between the play and the novel

The play follows the plot of the novel closely but to propel the action forwards many of the purely atmospheric elements included in the book have been cut. As a result much of the dialogue reads like plot exposition rather than natural speech. For example, in the opening scene the character of Jonathan Harker finds himself at the door of Count Dracula’s castle in Transylvania, but has to relate his preceding nightmarish journey with a mysterious coachman to the audience for subsequent events in the play to make sense:

After a drive through solid darkness with an unknown man whose face I have not seen and who has in his hand the strength of twenty men and who can drive back a pack of wolves by holding up his hand, who visits mysterious blue flames and who wouldn’t speak a word that he could help, to be left here in the dark before a – a ruin.

This monologue continues in a similarly wooden fashion for a total of 24 lines, purely to set up the events that follow. In the novel, however, Harker’s journey to the castle is related via diary entries and, as a result, is conveyed to the reader in a measured, atmospheric fashion. Even allowing for the play script being hastily put together, there is a suggestion here that the reason why the book works so well, and why the theatre version is somewhat stilted, is because Stoker was always more comfortable with dramatic descriptions and the creation of atmosphere and setting than he was with dialogue. Dracula, the novel, works beautifully because it is largely told in the form of diary entries, newspaper articles and letters as opposed to conventional dialogue. This was a canny decision by Stoker. By telling the story via journals and letters, a narrative method that had been revived with great success by Wilkie Collins in his novel The Woman in White (1859–60), Stoker was able to infuse the action with an immediacy, and a means of unfolding naturally through the thoughts of his characters. It also keeps Count Dracula himself at a distance, veiling him in extra layers of shadow and mystery because we only hear about him, and about his actions, through the thoughts and actions of his enemies. Further, the use of many real locations in the novel – Whitby, for example, and the streets of London which feature towards the end of the book – enabled Stoker to give the supernatural events a firm foundation in a real and familiar landscape: respectable Victorian Whitby and the macabre events which occur in its streets and churchyards spark against each other in an unsettling fashion. This jarring intrusion of the bizarre into the mundane is a common theme in Gothic fiction and an excellent way of evoking a feeling of unease.

As the script progresses the number of printed extracts cut directly from the printed proofs and pasted to the pages increases significantly, suggesting once again the haste with which the theatre script was assembled. Stoker was working quickly to prepare his play, submit it to the Lord Chamberlain’s Office and arrange for the dramatic reading. Even so the manuscript provides a unique glimpse into the mind of an author who, in Dracula, produced one of the most enduring, imaginative and eerily-compelling novels of the 19th century. 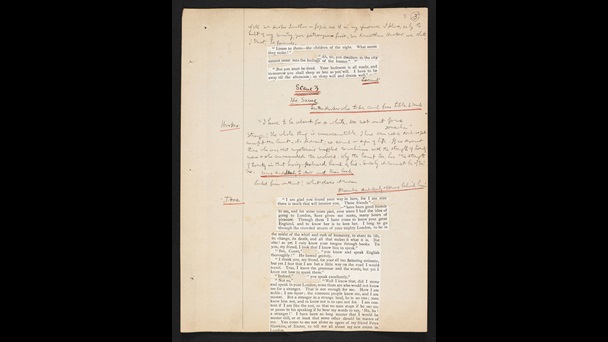