The early Victorian era is often regarded as marking a lull in the development of Gothic literature. The first golden age of Gothic, inspired by authors such as Horace Walpole, Ann Radcliffe and Matthew Lewis had passed, while the second golden age of Gothic which would include works by Robert Louis Stevenson, Oscar Wilde and Bram Stoker lay in the future. Between these two periods the emphasis in fiction was firmly on domestic realism, social issues and the role of Britain within a rapidly changing world. The melodramatic flights of excess associated with Gothic tended to be pushed into the margins, the preserve of sensational penny dreadfuls such as Varney the Vampire (1845–47) and The String of Pearls (1846–47), which featured Sweeney Todd, the Demon Barber of Fleet Street. Gothic fiction and the mainstream, so it would appear, parted company. Crucially, however, Gothic was not so much banished as repressed. From time to time it would emerge through the cracks to highlight those quintessentially Gothic themes of sexuality, transgression, violence and death. The more you look at the work of authors such as the Brontës, Wilkie Collins and, in particular, Charles Dickens the more Gothic motifs and elements you begin to see.

Charles Dickens and the Gothic Imagination

Gothic imagery in fiction during the early Victorian era functions in much the same way as the subconscious does in the human mind. In other words, it acts as a repository for troubling emotions desires and ideas. Gothic breaks through into the seemingly rational and sober narratives of authors such as Dickens and draws attention to the dark shadows and hidden corners of modern society. During this era, Gothic moves away from the castles, abbeys and mountain landscapes so beloved of authors like Ann Radcliffe and instead moves into contemporary urban environments: in particular Gothic moves into London. A narrative such as Oliver Twist (1837) may, initially, seem to have very little in common with the great Gothic novels of the 1790s but, it deals with the story of an innocent orphan, Oliver, pursued by menacing figures such as Monks and Bill Sikes through decaying and shadowy London slums lit only by moonlight. The central idea behind the plot, together with the atmosphere and the portrayal of the city, are decidedly Gothic in nature. Whereas the youthful innocents in the novels of Ann Radcliffe are pursued down castle corridors, in Oliver Twist they are pursued through Victorian city streets.

On occasions Dickens went much further and used Gothic purely for macabre effect – the vampiric Daniel Quilp, for example, who terrorises Little Nell in The Old Curiosity Shop (1841) is finally ‘buried with a stake through his heart in the centre of four lonely roads’ (Chapter 73); Krook, the rag and bottle merchant from Bleak House (1853) dies of spontaneous combustion (Chapter 32), and Miss Havisham’s bridal gown effectively doubles as her funeral shroud in Great Expectations. This intertwining in the Victorian era of realism and a sense of moral outrage with an inventive use of Gothic imagery results in a powerful new variation on the traditional Gothic novel. 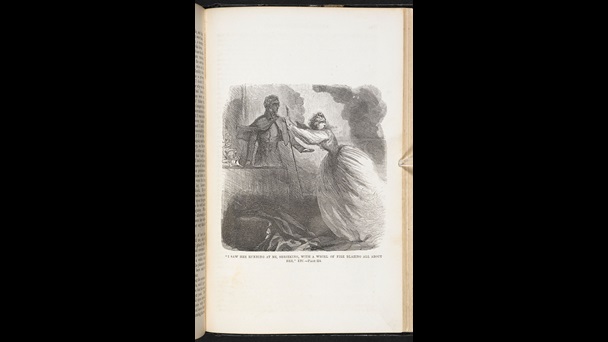 John McLenan's illustration of the dramatic moment the fire breaks out in Satis House, from the American edition of Great Expectations, 1861.

Charles Dickens, in Oliver Twist, certainly had ambitions beyond the simple desire to provoke fear in his readers, but his use of disturbing imagery to emphasise important concerns about contemporary Britain added intensity to his arguments. In Oliver Twist the orphan Oliver’s innocence is contrasted throughout with the greed of the workhouse administrators; the grisly practices of Mr Sowerberry’s undertaker’s shop and with Fagin’s gang of amoral thieves. Grotesque comedy and macabre imagery combine to make the serious issues raised by the book all the more disturbing and memorable. 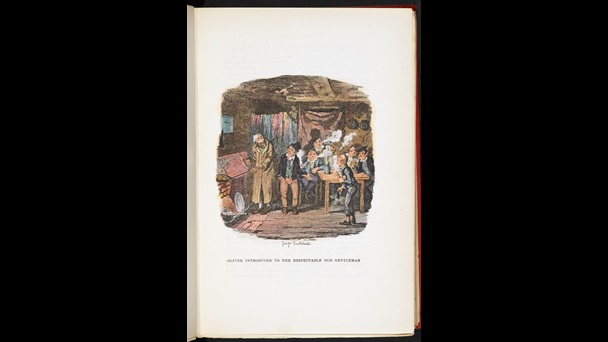 George Cruikshank’s illustration of Fagin and the group of children under his ‘care’, from a 1911 colour edition of Oliver Twist. Note the execution broadside depicting three hanged men pinned to the wall, left.

Bleak House was Dickens’s ninth novel and, with its double narrative in which chapters are either told from the perspective of one of the characters, Esther Summerson, or else presented from the perspective of an omniscient narrator, it is arguably his most technically accomplished work. It is also the novel in which his use of Gothic imagery to heighten his attacks upon society’s failings is at its most intense.

The opening paragraphs of Bleak House describe London with surreal, nightmarish intensity. The streets are awash with mud – so much so that ‘it would not be wonderful to meet a Megalosaurus, forty feet long or so, waddling like an elephantine lizard up Holborn Hill’; soot from the chimney-pots falls as a black rain; and everything from the London docks to the Essex marshes, the Kentish heights and the eyes and throats of Greenwich pensioners is cloaked in fog. However, this obscuring of the landscape in and around London is as nothing in comparison with the ‘groping and floundering condition’ of the High Court of Chancery, where the seemingly interminable case of Jarndyce and Jarndyce drags slowly on. The literal fog outside the court mirrors the fog of stagnation generated by the processes of the law within.

Dickens uses this method of comparison throughout Bleak House: time and again one location, institution or character is compared with another. Just as the literal fog is contrasted with the mental obfuscation of the law courts so Chesney Wold, the traditional Gothic country mansion of the aristocratic Lord and Lady Dedlock, is compared with the Gothic London slum of Tom-All-Alone’s. Indeed, as Dickens shows, the desiccated nature of the former actually results in the creation of the latter. In a sense, as we will see, the traditional Gothic landscape serves to shape its modern Gothic counterpart. In this illustration of Chesney Wold - the Dedlocks' stately home - Hablot Knight Browne draws out the setting's Gothic elements. From the original monthly instalments of Bleak House by Charles Dickens, 1852-53.

Sir Leicester Dedlock’s stately home in Lincolnshire, Chesney Wold, is a traditional Gothic edifice. The labyrinthine passages inside the building are lined with gloomy portraits; the river which the building overlooks is stagnant, and there is even a hint of the supernatural in the form of the Ghost’s Walk, the flagged pavement running outside the house upon which ghostly footsteps, if heard, are believed to herald disaster. Chesney Wold is emblematic of the dead weight of the aristocracy, and the prevailing status quo that hinders any possibility of change. The stagnant river and the lengthy succession of portraits depicting the previous generations of Dedlocks reflect the resistance to progress of the occupants within. Chesney Wold’s true Gothic significance resides not so much in its appearance as in its anachronistic quality, obsolescence and isolation from the modern world.

Tom-All-Alone’s, meanwhile, is a London slum that provides a modern Gothic equivalent to the moribund horrors of Chesney Wold. The main street past Tom-All-Alone’s is ‘a stagnant channel of mud’ lined with ‘crazy houses, shut up and silent’ (chapter 46). Tom-All-Alone’s provides a refuge, of sorts, for London’s poorest citizens, those on the extreme margins of society. Due to its insanitary conditions, however, it is also a breeding ground for crime and disease. In the illustration of Tom-All-Alone’s by Halbot Knight Browne, the buildings encroach on either side while the shadows potentially hide all manner of threats and horrors. What links Chesney Wold to Tom-All-Alone’s is Chancery, and the labyrinthine legal complexities of the case of Jarndyce and Jarndyce. Tom-All-Alone’s is the main location whose fate is caught up in the interminable court case, a case that involves Sir Leicester and Lady Dedlock. The aristocratic Gothic edifice of Chesney Wold, and the squalid slum of Tom-All-Alone’s are connected by the political inertia and self-interest displayed by the interminable processes of the law – processes that the ruling elite have no desire to change because, of course, it suits their interests by maintaining the status quo. 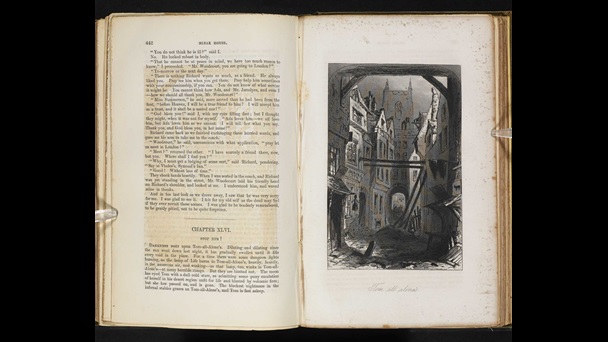 Hablot Knight Browne, the illustrator for Charles Dickens's Bleak House, depicts the slum of Tom-All-Alone's as a decaying, gloomy and claustrophobic labyrinth. From the first edition, 1853.

Dickens also uses a more obvious and dramatic form of Gothic imagery in Bleak House to heighten the emotional drama of his story. Here Gothic is used primarily for effect, rather than to address the real horrors that plague society. The lawyer, Tulkinghorn, who seeks to blackmail Lady Dedlock is described as resembling ‘a larger species of rook’ (Chapter 12). There is also something Satanic about Tulkinghorn. He is always dressed in black and his clothes ‘never shine’, being instead ‘irresponsive to any glancing light’ (Chapter 2), which recalls John Milton’s Satan from Paradise Lost (1667) – ‘his lustre visibly impair’d’ (Book IV). Similarly Tulkinghorn’s chambers resemble hell, being ‘an oven made by the hot pavements and hot buildings’ (Chapter 42). Richard Carstone, meanwhile, one of the victims of Chancery’s grotesque slowness in resolving the case of Jarndyce and Jarndyce, becomes ‘bloodless and gaunt’, under the gaze of the lawyer Vholes who, in Esther’s mind, has ‘something of the vampire in him’ (Chapter 60).

Gothic mirroring the flaws of society

Dickens’s novels are full of grotesque characters and Bleak House, with its withered moneylender Grandfather Smallweed; the gin-soaked rag and bottle merchant Krook; the ‘vinegary’ Mrs Snagsby and the vampiric lawyer Vholes, is no exception. In Dickens, however, it is important to remember that he frequently uses grotesque Gothic characters to highlight how society weighs down upon people as they attempt to make a living in a harsh and unfair world. The grotesque exterior of a character such as Grandfather Smallweed mirrors his inner spiritual decay but this is caused as much by the flaws of society as by any moral lapsing on the part of Grandfather Smallweed – described as ‘monkeyish’ and ‘a kind of fossil imp’ – himself (Chapter 20). In this sense Dickens uses Gothic in a rather sympathetic way: partly to provoke shock, but partly to provoke anger at society for reducing human beings to such a hideous state.

There is no direct equivalent to a novelist such as Ann Radcliffe in the early Victorian era. Rather Victorian novelists placed Gothic imagery within a wider literary landscape dealing with social issues and domestic narratives. Gothic was used to add drama and intensity to the plight of characters such as Oliver Twist and Jo the crossing sweeper. Old-style Gothic edifices such as Chesney Wold were linked to inner-city Gothic slums such as Tom-All-Alone’s and the labyrinthine Gothic secrets, mysteries and complexities of the British judicial system were seen as binding the two together, ensuring the traditional status quo in which the rich remain in their place and the poor in theirs would be maintained. Characters such as the vampire-like lawyer Vholes and the shrivelled moneylender Grandfather Smallweed may have inspired loathing and horror but it was society, as much as their own dark natures, that had made them grotesque figures. In other words, society and the ruling classes were just as complicit in Victorian Gothic as the feudal order and the tyrannical lord in his castle were for the original Gothic of Horace Walpole and Ann Radcliffe.