The Victorian period witnessed massive changes in thinking about women’s roles in society. Dr Simon Avery asks how Christina Rossetti's poetry sits within this context, looking at her representations of oppression, female identity, marriage and the play of power between men and women.

In 1870, the acclaimed Victorian poet Christina Rossetti (1830–94) sent a letter to her brother, Dante Gabriel Rossetti, in which she commented on her abilities as a writer. Comparing herself to her great female predecessor, Elizabeth Barrett Browning (1806–61), she noted: ‘It is not in me, and therefore, it will never come out of me, to turn to politics or philanthropy with Mrs. Browning: such many-sidedness I leave to a greater than I’. While Rossetti might not have written about politics in such a focused and sustained way as Barrett Browning (whose works examined issues such as nationalism, revolution, slavery, and industrialisation), there was one key area with which both poets were concerned: the politics of gender and power.

The Victorian period witnessed massive changes in thinking about women’s roles in society with much debate concerning women’s education, employment opportunities, marriage, sexuality, psychology, and the right to vote. Within this context, Christina Rossetti had complicated views on female suffrage and equality. At times she used the Biblical idea of woman’s subordination to man as reason for maintaining the status quo, while at others she argued for female representation in Parliament and spoke out against the sexual exploitation of women in prostitution. In many ways this shows her to be a particularly complex thinker about the position of women in society and it is certainly a concern which she comes back to time and again in her poetry. Her views may not always be ‘radical’ as such, but they are usually far from conservative and often questioning, challenging and potentially subversive.

The oppression and alienation which many Victorian women might have experienced due to their exclusion from key systems of power is felt strongly in Rossetti’s four-stanza poem, ‘From the Antique’. Composed in 1854 but never published in Rossetti’s lifetime – possibly because of its unmistakeable critique – the poem opens with an unflinching expression of despair:

Doubly blank in a woman’s lot:

I wish and I wish I were a man;

These initial lines, with their austere word choice, are uncompromising in their analysis of woman’s place in society. The metrical change at the beginning of the second line places an increased emphasis on ‘Doubly blank’, while the sense of longing and despondency is caught in the repetitions. Far better to be a man, the speaker suggests, before the surprise turn proposes the desire for extinction altogether. So ‘weary[ing]’ is the position of women that annihilation is preferable, since this would enable escape from gender expectations and imposed identities. While ‘the world would wag [carry] on the same’ (l. 9), seemingly indifferent to women’s plight, the speaker would have removed herself from the endless cycle of bleak conformity where individuals ‘wake and weary and fall asleep’ (l. 16). 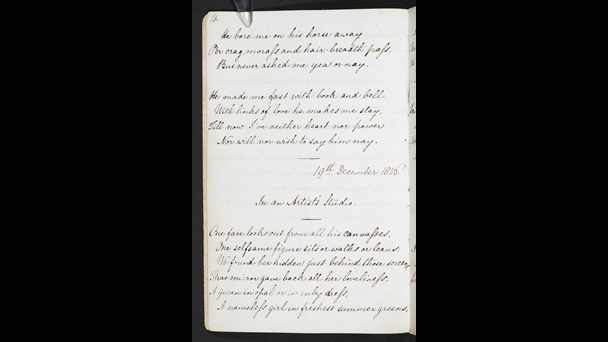 Manuscript copy of ‘In an Artist’s Studio’ by Christina Rossetti, copied into one of her notebooks, 1856. A comment on the female muse, the poem remained unpublished during her lifetime.

This sense of women’s entrapment, which the speaker of ‘From the Antique’ seeks to eradicate, is also felt in Rossetti’s remarkable poem, ‘In an Artist’s Studio’. Composed in 1856 but not published until after Rossetti’s death, this poem is written in the form of a sonnet, traditionally the poem of love. What ‘In an Artist’s Studio’ offers, however, is a cutting critique of the ways in which the female model – William Michael Rossetti suggested she might be based on the Pre-Raphaelite muse, Elizabeth Siddal – is painted, ‘framed’ and controlled by the male artist:

One face looks out from all his canvasses,

One selfsame figure sits or walks or leans;

We found her hidden just behind those screens,

That mirror gave back all her loveliness.

A queen in opal or in ruby dress,

A saint, an angel;–every canvass means

On looking round the studio, the speaker is appalled by the reductive similarity of all the paintings, the single vision of the artist caught in the repeated use of the word ‘one’ – ‘[o]ne face’, ‘[o]ne selfsame figure’, ‘same one meaning’. The model’s actual identity is lost and she is subsequently reconstructed as various female icons (‘queen’, ‘saint’, ‘angel’) or as a ‘nameless girl’. Indeed, the idea of the model being at the mercy of the artist’s whims is reinforced at the beginning of the sonnet’s sestet, where the artist appears as a kind of vampire figure who ‘feeds upon her face by day and night’ (l.9). The model is drained of life, the poem suggests, so that the artist can gratify his fantasies. Indeed, time and again in Rossetti’s poems, the female figure is depicted as entrapped or confined – physically, psychologically or both.

Marriage and the complexities of relationships

In a number of her poems Rossetti examines women’s position in society through consideration of the institution of marriage (see, for example, ‘A Triad’ and ‘Love From the North’). In the ballad-like poem ‘Maude Clare’, which was written in 1857-58 and published in Goblin Market and Other Poems in 1862, this examination takes place just after the wedding service itself. The church here becomes the site of conflict as the newly-wed Thomas and Nell are intruded upon by Maude Clare, Thomas’s previous lover. Throughout the poem, Nell and Maude Clare are set up as opposites – ‘His bride was like a village maid,/ Maude Clare was like a queen,’ we are told in the first stanza (ll. 3–4) – and it is increasingly Maude Clare, rather than the new bride, who is the focus of attention. Indeed, in a poem which is composed principally of dialogue, Maude Clare dominates the meeting as she returns to Thomas the gifts that he has previously given her (‘half of the golden chain/ You wore about your neck’, ll. 21–22) and then offers Nell her ‘share of a fickle heart’ (l. 37) – a neat reversal of the friendship and community traditionally associated with the wedding gift. 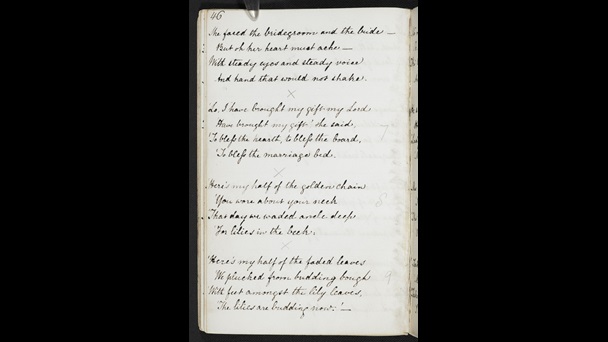 Extract from a manuscript copy of 'Maude Clare' by Christina Rossetti, copied into one of her notebooks, dated 8 December 1857.

Thomas remains significantly silent throughout, hiding his face and barely able to stutter Maude Clare’s name – a clear critique of dominant masculinity – and it is interestingly left to Nell to confront the intruder. For in the poem’s final two stanzas, it is Nell who takes over the speaking voice, directly addressing Maude Clare and asserting, in a phrasing which rings out a challenge, that she will take what Maude Clare spurns:

“Yea, tho’ you’re taller by the head,

More wise, and much more fair;

I’ll love him till he loves me best,

Here, Nell both subtly wrestles power back from the ex-lover and asserts her centrality in relation to her husband. Maude Clare might have dominated the scene throughout, yet it is Nell’s determination and defiance which strike home at the end.

This idea of a woman’s choice and determination in relationships can also be felt in the humorous but forceful ‘No, Thank You, John’ (written 1860; published 1862). Here the speaker is in no doubt about her mind as she firmly rejects a potential suitor in whom she has no interest. From start to finish, she resists John’s entreaties (we ‘hear’ some of his comments through reported speech) as she deploys impeccable logic and effectively turns his own arguments against him:

I never said I loved you, John:

Why will you teaze me day by day,

And wax a weariness to think upon

I have no heart?–Perhaps I have not;

But then you’re mad to take offence

That I don’t give you what I have not got:

What this poem asserts is the woman’s right to say ‘no’ and to claim independence and agency for herself. Certainly, she is not to be bullied into a relationship because a man or social convention more generally demands it.

The astonishing ‘Winter: My Secret’, written in 1857 and published in 1862, illustrates another way in which the speakers of Rossetti’s poems establish strategies for defying expectations and conventions. As William Michael Rossetti noted, this poem was originally called ‘Nonsense’, a title which gestures towards the text’s playful nature. With its bounding rhythms, skilful word play, and building up of image on image, the poem is teasing and mischievous as the speaker refuses to share a ‘secret’ that she knows:

I tell my secret? No indeed, not I:

Perhaps some day, who knows?

But not today; it froze, and blows, and snows,

And you’re too curious: fie!

Behind this playfulness, however, is an intriguing study in the manipulation of power. For the speaker denies entry to the reader – ‘I cannot ope [open] to every one who taps’ (l.13) – and instead metaphorically wraps herself in protective clothing (‘a shawl,/ A veil, a cloak’, ll.11-12) which will keep others out. Her privacy is not to be intruded upon and she consequently leaves the reader guessing at her knowledge, even suggesting that there might not be a secret after all, ‘only just my fun’ (l.9). This therefore becomes an intriguing poem about what is not said, where the speaker skilfully withholds power and control. The game is hers and she will only ‘tell’ when and if she chooses.

In poems such as these, then, Rossetti’s speakers demonstrate both an awareness of, and resistance to, those social and political expectations which define acceptable roles for women and which potentially leave them powerless. While poems such as ‘From the Antique’ and ‘In an Artist’s Studio’ emphasise the ways in which women might be trapped by convention, other poems such as ‘Maude Clare’, ‘No, Thank You, John’, and ‘Winter: My Secret’ reveal a much more complex negotiation of power which enables the women to achieve agency, equality and self-sufficiency. As such, Rossetti’s poems make an intriguing contribution to those crucial debates around the Woman Question and gender relations which were central to the second half of the nineteenth century and beyond.