With close readings of 'Up-Hill' and 'A Birthday', Dr Simon Avery explores the tensions and questions that characterise the quest for spiritual fulfilment found in Christina Rossetti's religious poetry.

Over a career which spanned nearly half a century, Christina Rossetti (1830–94) produced poetry in a wide range of forms and styles, and she was both lauded by her contemporaries and influential on the next generation of writers. With the exception of the astonishing Goblin Market, the title poem to her first volume published in 1862, her poems are usually tightly controlled and use relatively accessible language. Yet while her works may appear straightforward at first, they possess an intellectual depth which shows Rossetti to be an astute questioner and analyst of her contemporary world.

A major influence and drive for Rossetti’s writings was her devout religious belief. As the sister of the painter-poet Dante Gabriel Rossetti (1828–82), Rossetti was at the centre of the Pre-Raphaelite movement in the mid-to-late Victorian period, a radical group which challenged conventions about art in many ways. She was sometime model for her brother’s paintings – significantly being painted as the Virgin Mary in The Girlhood of Mary Virgin (1848–9) and Ecce Ancilla Domini! (1850) – but she quickly became the movement’s lead poet. Her strong religious beliefs nevertheless marked her out from the majority of the other Pre-Raphaelites. Indeed, while Dante Gabriel would become more free-thinking and withdraw from established belief, Christina, along with her sister Maria and their mother Frances, maintained a strong commitment to High Anglicanism. Worshipping at Christ Church, Albany Street (London) from the early-1840s, the Rossetti women came under the influence of the Oxford Movement, with its increased emphasis on rituals such as confession and communion. Maria would eventually become an Anglican nun in 1873 and Christina would work for some time with the Anglican sisterhood at the St Mary Magdalene Penitentiary, Highgate, helping prostitutes escape their lives on the streets by retraining them for domestic service. Moreover, Christina would turn down two potential suitors, James Collinson and Charles Bagot Cayley, on the grounds of religious incompatibility. 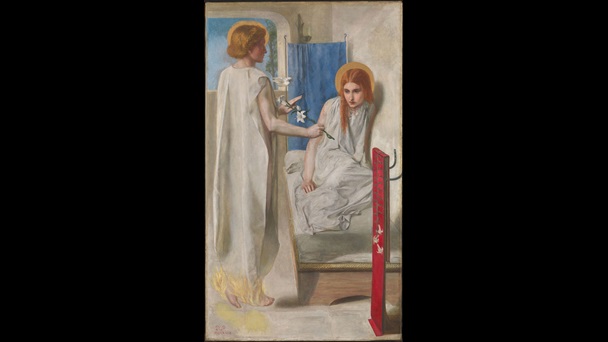 Like Millais's Christ in the House of His Parents, Ecce Ancilla Domini (1850) by Dante Gabriel Rossetti provoked strong opinions from critics for its depiction of a religious subject. His sister, the poet Christina Rossetti, was the model for Mary, right.

Advertisement for a house for 'fallen women' from The Morning Post 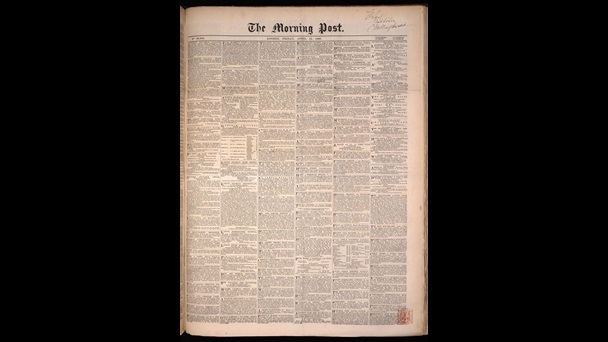 An advertisement for the St Mary Magdalene Penitentiary where Christina Rossetti volunteered. From The Morning Post, 1860.

It is little surprise then, that much of Rossetti’s poetry has a strong religious dimension. Many of her poems are overtly concerned with religious issues and it is fair to argue that all her work, even that which seems to deal with more secular concerns, has a resonating religious or spiritual drive. Indeed, Rossetti was viewed as a great spiritual writer in her own day and came to be seen, along with Gerard Manley Hopkins (1844–89), as one of the great religious poets of the age. Yet Rossetti’s religion is never simple or unquestioning. Her writings show her constantly interrogating religious ideas and beliefs, often with a degree of tension and anxiety. Certainly, the speakers of Rossetti’s poems repeatedly struggle with religious doubt, frustration and fear as they seek a reassurance that might never come, or attempt to understand their sense of exclusion from God or Christ. Writing at a time when established religious beliefs were being challenged by new developments in science – particularly the theory of evolution as it was advanced in Charles Darwin’s Origin of Species (1859) and The Descent of Man (1871) – Rossetti demonstrates one way in which a key Victorian writer examined the ambiguities of faith in a time of major change.

In a poem called ‘The World’, which was written in 1854 and published in the 1862 volume Goblin Market and Other Poems, Rossetti depicts the disastrous consequences of being attached to worldly pleasures rather than remembering the importance of spiritual devotion. The world here is presented as an attractive yet deadly female figure, a kind of femme fatale. During the day the World is seductively beautiful and woos the speaker’s soul with ‘[r]ipe fruits, sweet flowers, and full satiety’ (l. 6) – imagery which recalls the fruit on offer in Goblin Market. But at night, she is revealed ‘[i]n all the naked horror of the truth’ (l. 10), as Medusa-like, ‘subtle serpents gliding in her hair’ (l. 4). Being attached to this monstrous temporal world, Rossetti’s speaker affirms, will take her away from God and leave her fearing for her immortal life. For as she says, in language which emphasises the fear of being turned into a devil-like figure:

Is this a friend indeed; that I should sell
My soul to her, give her my life and youth,
Till my feet, cloven too, take hold on hell? (ll. 12–14)

‘The World’ is a terrifying sonnet – that poetic form traditionally used to write about love – in which Rossetti emphasises the need to resist being taken in by earthly temptations. Yet the path to religious salvation is never easy either. For example, in ‘A Better Resurrection’, also published in the 1862 volume, the speaker repeatedly emphasises her isolation – ‘Look right, look left, I dwell alone’ (l. 4) – and her alienation from the ‘everlasting hills’ of God’s blessing (l. 6). As she says in the third stanza, her life is ‘like a broken bowl’ which is unable to hold ‘[o]ne drop of water for my soul’ (ll. 17–18) – an image of emptiness and lack of spiritual sustainability. Yet in the poem’s final lines, there is hope of renewal and transformation as the speaker calls on Christ to turn the ‘broken bowl’ of herself into something new: 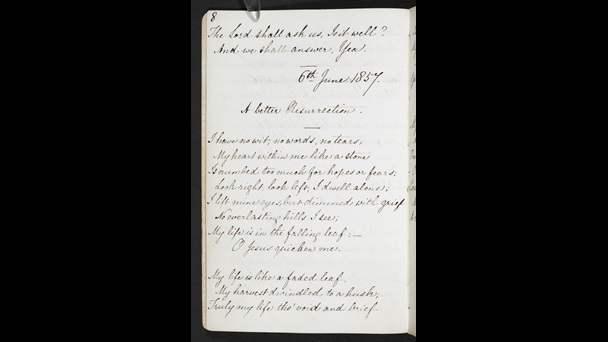 Manuscript copy of 'A better Resurrection' from one of Christina Rossetti's notebooks, used to transcribe fair copies of her poetry. Dated 30 June 1857.

Through Christ, the speaker suggests, the human self can be ‘remould[ed]’ and achieve union with the divine – that ‘Better Resurrection’ of which the title speaks. As a later poem, ‘Alas My Lord’, published in 1874 indicates, however, this is something that has to be constantly fought for. Indeed, the difficulty of the process is clearly articulated in the poem’s opening stanzas:

Alas my Lord,
How should I wrestle all the livelong night
With Thee my God, my Strength and my Delight?

How can it need
So agonized an effort and a strain
To make Thy Face of Mercy shine again?

How can it need
Such wringing out of breathless prayer to move
Thee to Thy wonted Love, when Thou art Love? (ll. 1–9)

‘Wrestle’, ‘wring’, ‘strain’ – such language indicates the exhausting force and effort with which Rossetti’s speakers strive to achieve a meaningful relationship with God. The repeated use of the question format here also emphasises the longing for this relationship to be affirmed and the fear of ultimately being shut out from salvation. Certainly, Rossetti’s way of the cross is never easy.

The questioning format used in ‘Alas my Lord’ is also key to one of Rossetti’s most famous and frequently-anthologised poems: ‘Up-Hill’. Written in 1858 and published alongside ‘The World’ and ‘A Better Resurrection’ in 1862, this poem uses a series of questions and answers to explore the idea that, after life’s hardships, a place with God might be achieved. It works through one long metaphor of life as a journey towards the ‘resting-place’ (l. 5) or ‘inn’ (l. 8) of heaven, a version of that religious quest motif found, for example, in John Bunyan’s The Pilgrim’s Progress (1678–84). The halting metre and alternating short lines effectively emphasise the struggle of the journey through the ‘day’ of mortal existence, even while the answering voice affirms that at night (in death) security will be assured:

Does the road wind up-hill all the way?
Yes, to the very end.
Will the day’s journey take the whole long day?
From morn to night, my friend.
[…]
Shall I find comfort, travel-sore and weak?
Of labour you shall find the sum.
Will there be beds for me and all who seek?
Yea, beds for all who come. (ll. 1–4; 13-16)

The austere, deceptively simple language here – many of the words are monosyllabic – typically masks the complexities of religious thought that Rossetti’s poetry often explores. For the difficult journey of ‘Up-Hill’ is as much a journey to religious understanding as anything else. 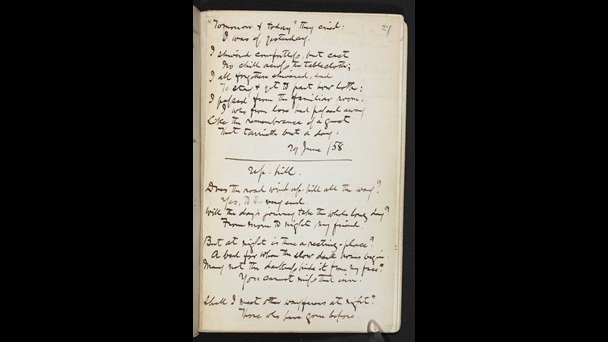 Manuscript copy of 'Up-Hill' from one of Christina Rossetti's notebooks, used to transcribe fair copies of her poetry. This poem is in the hand of her brother, William Michael Rossetti, dated 29[?] June 1858.

What might be achieved in the desired relationship with Christ or God is seen in no more celebratory way than in the poem ‘A Birthday’, written in 1857 and again published in the 1862 volume. It is an intriguing poem where the idea of what is being celebrated on the ‘Birthday’ is never exactly made explicit. But on one level at least, the ‘birthday’ is about the re-birth of the self into the next life or into a union with the divine:

Raise me a dais of silk and down;
Hang it with vair and purple dyes;
Carve it in doves and pomegranates,
And peacocks with a hundred eyes;
Work it in gold and silver grapes,
In leaves and silver fleurs-de-lys;
Because the birthday of my life
Is come, my love is come to me. 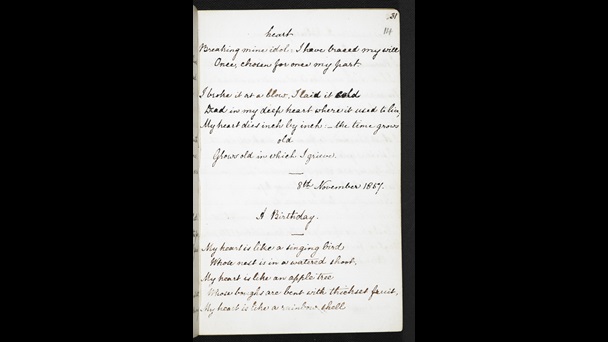 Manuscript copy of 'A Birthday' from one of Christina Rossetti's notebooks, used to transcribe fair copies of her poetry. Dated 18 November 1857.

The beautiful ornateness in this poem – which is unusual in Rossetti’s work – piles up image after image in the style of a Pre-Raphaelite painting or a William Morris tapestry. The first stanza, with its repeated ‘My heart is like …’ structure, sees the speaker attempting to find a suitable comparison in nature to describe her happiness. As the last two lines of this stanza indicate, however, all these comparisons fail because her ‘heart is gladder than all these.’

In the second stanza, therefore, she issues a series of imperatives – ‘Raise me … Hang it … Carve it … Work it …’ – in order to construct something more solid and permanent as an expression of her joy. The elaborate dais is covered with symbols of spiritual fulfilment – the dove of the Holy Spirit, the fleur-de-lys as symbol of purity, the colours purple, gold and silver associated with royalty and the divine. The ‘love’ and the ‘birthday of my life’ which come to the speaker are clearly on one level meant to represent the final achievement of that long-desired union with Christ. As such, the exuberance and luxury of the poem are particularly apt as a celebration of having achieved spiritual fulfilment and moved beyond the struggle, doubt and anxiety which characterises so many of Rossetti’s intriguing and complex religious poems across her career.