Charles Dickens was certainly interested in crime and punishment in his own society. In his observational Sketches by Boz and his journals like Household Words he explored the parts of London where criminals lurked, and he reported on the doubtful workings of the criminal justice system. Yet in Great Expectations, crime is not so much a social issue as a psychological threat – a powerful influence that the novel’s hero, with all his ambitions to be a ‘gentleman’, cannot escape. Indeed, Great Expectations is not about Victorian England at all. It is set several decades back from the time of its publication in 1860–61. In the opening chapters Dickens takes his readers back to the 1810s, when prisoners were kept in the ‘hulks’ – prison ships moored in the Thames and the Medway rivers. These criminals are treated as utterly alien and separate. The escaped convict who unforgettably rises from amongst the graves in the opening chapter, the battered, ravenous man with his leg iron, is like a spirit come to claim Pip. The narrator becomes aware that there is no getting away from crime, but this is a reflection of his own guilty conscience rather than social fact.

At the end of that extraordinary opening chapter the narrator describes himself as a child, looking out across the marshes and seeing ‘the only two black things in all the prospect that seemed to be standing upright’: one of these is a sailors’ beacon, the other, ‘a gibbet with some chains hanging to it which had once held a pirate’. It is at once an emblem of childhood fears and a sign of Pip’s entanglement with crime. He watches the convict limp off towards it, ‘as if he were the pirate come to life, and come down, and going back to hook himself up again’ (ch. 1). The disconcerting blend of comedy and terror is characteristically Dickensian. Here, childhood fantasy catches the novel’s disturbing truth: that its protagonist is shadowed by crime and criminals. It is, after all, the story of a young man of high pretensions and ‘great expectations’ who believes that his fortune comes to him from an heiress – when in fact it is bequeathed him by a former criminal. Pip thinks he can be better than his background – better than Jo and Biddy, the two people who love him. He is doomed to find himself worse than he thought. 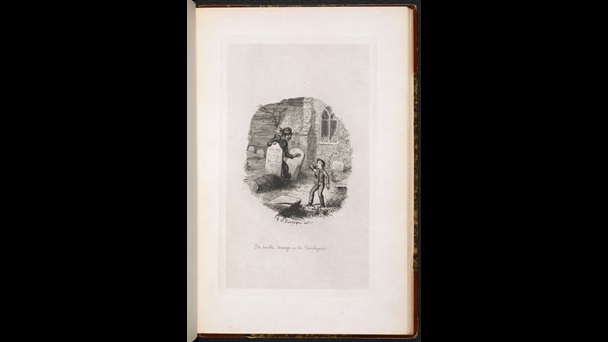 F W Pailthorpe's illustration of the first chapter of Great Expectations where Pip first encounters Magwitch in the graveyard, 1885.

An intimacy with crime

Pip keeps being forced into a kind of intimacy with crime. As a young man, travelling back to his childhood home from London, he finds himself on the same coach as two convicts. One of them he recognises as the same ‘secret-looking man’ who accosted him the local inn, the Three Jolly Bargeman, many years before. Then he showed him the very file that he had once given the convict. Now he finds the unrecognising convict sitting just behind him. ‘It is impossible to express with what acuteness I felt the convict’s breathing, not only in the back of my head, but all along my spine’ (ch. 28). He is connected with crime; he feels its breath on his neck. 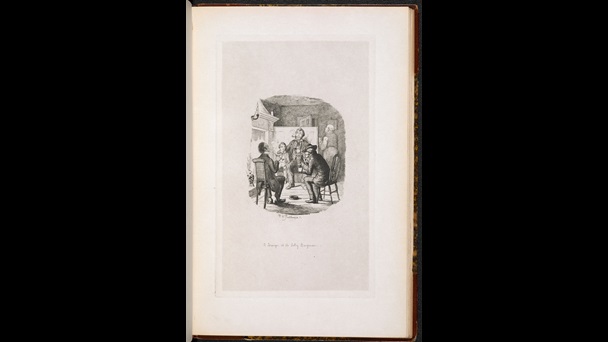 Illustration of Pip and the unnamed convict, front right, at the Three Jolly Bargeman, by Frederick Pailthorpe, 1885.

Every character in the novel seems interested in crime. Mr Wopsle entertains his fellow drinkers by reading aloud a newspaper account of ‘a highly popular murder’ (chapter 18). Perhaps he is rather like Dickens himself, who in his early essay ‘Criminal Courts’ admitted to ‘the indescribable feeling of curiosity’ excited by true crime.[1] Wopsle and his audience are ‘delightfully comfortable’ with the performance of testimonies at an inquest, until a stranger interrupts with a forensic demolition of their assumptions about the facts of the case. It is, of course, the lawyer Jaggers, who punctures the complacency of those who treat crime stories as entertainment (ch. 18). Jaggers knows crime to its heart and draws his knowledge of human nature from criminals. 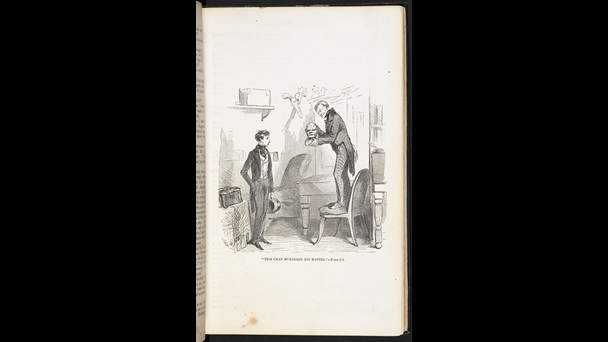 ‘This taint of prison and crime’

Pip’s agent amongst the criminal clients is Wemmick, who in Chapter 32 takes him on a short tour of Newgate Prison, where he meets a coiner who is due to be executed a few days later. Afterwards, waiting to meet Estella, Pip thinks ‘how strange it was that I should be encompassed by all this taint of prison and crime’ – that, since his childhood, it has reappeared ‘starting out like a stain that was faded but not gone’. Thinking of the celestial Estella’s imminent arrival, he considers ‘with absolute abhorrence … the contrast between the jail and her’ – yet she too is tangled in crime, the daughter of the very convict Pip encounters at the beginning of his tale. But then so many are tainted. Compeyson, the man Miss Havisham was to marry, becomes another convict. He will later recruit Orlick, who works with Jo in his forge, and will haunt and threaten Pip. When Orlick strikes with murderous intent his weapon will be the leg-iron that Pip helped Magwitch saw off his leg many years earlier. Jaggers, who presides over the narrative, is a forbidding analyst of human nature who rules the lives of criminals. His maid, Molly, with her scarred arms, has been saved from the gallows by his advocacy and is another with a criminal past. 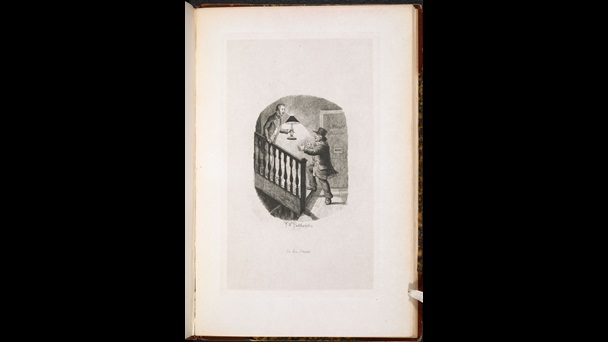 Illustration of Magwitch returned to find Pip as an adult, by Frederick Pailthorpe, 1885.

Pip is appalled and revolted when Magwitch returns to claim him as his ‘dear boy’, ‘the gentleman what I made’ (ch. 40). Yet, unwillingly, he learns a lesson in compassion. The criminal is a man reduced, but a man still.

I've been done everything to, pretty well – except hanged. I've been locked up as much as silver tea-kittle. I've been carted here and carted there, and put out of this town and put out of that town, and stuck in the stocks, and whipped and worried and drove. I've no notion where I was born than you have – if so much. I first became aware of myself down in Essex, a thieving turnips for my living. Summun had run away from me – a man – a tinker – and he'd took the fire with him and left me very cold. (ch. 42)

The rueful, self-condemning Pip, with his aspirations to be a ‘gentleman’, is to be taught a lesson. In his preface to the Third Edition of Oliver Twist (1841), Dickens retorted to those who had condemned him for stooping too low in his choice of characters. ‘... if I look for examples, and for precedents, I find them in the noblest range of English literature. Fielding, Defoe, Goldsmith, Smollett, Richardson, Mackenzie – all these for wise purposes, and especially the two first, brought upon the scene the very scum and refuse of the land’. In this early novel, Dickens exhibited an underworld into which his young hero was dragged, but from which he was ultimately redeemed. In Great Expectations he showed his readers that crime was not something distant. Pip’s awareness of its closeness to him dramatises his guilt at his own selfishness and disloyalty.