Darwin and the theory of evolution

Charles Darwin’s ideas had a profound impact on the understanding of human life. Carolyn Burdett looks at the way he developed his theory of evolution, and how it became part of the Victorian imagination.

Occasionally ideas change history. Charles Darwin’s theory of evolution by natural selection falls into this category, making Darwin one of the most important thinkers of modern times. He helped to transform how people thought about the natural world and humans’ place within it. As with most ideas, however, Darwin’s developed in a context. Other theorists had been for some time been puzzling about the work of nature, and wondering about the ways in which it changed and developed. What Darwin eventually formulated was a persuasive account of the means by which such change happens, and he called it evolution by natural selection.

Early interests and the voyage of the Beagle

Darwin was born in 1809 into a well-to-do family. His father was a successful physician and, initially, Charles intended to follow his father into medicine. Unable to bear the sight of blood and suffering, he instead decided to study to enter the Church – one of the other respectable professions for the son of a wealthy gentleman. But his real passion was the natural world. While half-hearted about his divinity studies, he was busy becoming a passionate amateur naturalist, eagerly collecting beetles and other insects, and reading avidly about the practice of natural science. When the chance came to be the ‘scientific person’ or naturalist on a planned five-year sea voyage around the world on HMS Beagle, Darwin grabbed it.

During these years (1831–1836), he investigated the geology and zoology of South America, the Galapagos Islands and the Pacific oceanic islands. He kept diaries and pocket notes, recorded finds, collected fossils, and wondered about the extraordinary richness and diversity of the natural world. So many different varieties of similar species, and so much evidence of species now extinct, excited and puzzled him. If all creatures were created by a purposeful God, why this super-abundance and even wastefulness evidenced all around? This was the question Darwin set out to answer.

On board the Beagle, Darwin read new work by a geologist, Charles Lyell. Principles of Geology (1830–33) showed that rocks bore traces of tiny, gradual, and cumulative change taking place over vast time periods. The roughly 2000-year span of the Christian Biblical story was dwarfed by Lyell’s vision of an earth immeasurably older, by millions of years. This impressed Darwin, as he looked at lands affected by erosions, earthquakes, and volcanoes, allowing him to speculate about change to species taking place over vast periods of time. Safely returned to England, he was also stirred by reading a work called Essay on the Principle of Population, first published in 1798 by the Reverend Thomas Malthus. Malthus argued that population growth would always outstrip food production because the former grew ‘geometrically’ (two parents have four children, each of whom have four children, and so on: the rise in just a few generations is from two to four to 24 to 96). Food and resources simply cannot keep pace, with the gloomy result of inevitable want and famine. Malthus’s ideas chimed with the evidence Darwin had noticed all around of an ongoing struggle for the resources of life, and of ‘losers’ that become extinct.

As Darwin’s ideas about species change developed, he knew he had to refute more modern Christian ideas that acknowledged the importance of natural processes but still retained the idea of a creator. William Paley’s Natural Theology (1802) famously likened God to a great clock-maker, who sets the exquisite machinery of nature into action. Evolutionary ideas were already circulating that tried to challenge such creationist accounts. A French naturalist, Jean-Baptiste Lamarck (1744–1829), had argued in 1809 that creatures can acquire new traits – for example by stretching their necks to reach food – that, eventually, were passed on to their offspring. Darwin was interested but not yet convinced.

In the years that followed his return from the Beagle voyage, Darwin collated his findings in a series of notebooks. He was aware that his ideas shook traditional accounts of creation to the core. His character was not naturally unorthodox or unconventional and he suffered agonies about what he was discovering, writing to a friend in 1844 that he had become ‘almost convinced … that species are not (it is like confessing a murder) immutable’. Matters were not helped by the fact that he had married in 1839 and his wife, Emma, was conventionally religious. Darwin had dreams about being executed for his theory, and suffered from repeated ill health as a result of his anxieties.

By the end of the 1830s, though, he had worked out his theory of evolution by natural selection. The theory began by adapting Malthus’s law. The natural world is tremendously fecund and procreative but unable to support all it produces, and so a grim struggle for survival ensues. Nature does not produce stability and sameness, like machines. Organisms vary and offspring inherit such variation from their parents. Certain variations afford benefits in particular environments. Because environments always exert pressure on populations, these often tiny but accumulating variations mean some members of a species are better adapted to that environment than others. Over long periods of time, such tiny adaptations result in a species transforming from one thing into another. This is the mechanism by which nature ‘selects’ certain qualities in a manner similar, Darwin realised, to how a human breeder selects for certain attributes in cows or dogs or pigeons. The result, for Darwin, was that life began to look like a single tree, with infinite variation, branching and re-branching, but derived from a common ancestor.

1859 and the Origin of Species

In the early 1840s Darwin began to write up his theory. It proceeded very slowly, perhaps because of Darwin’s nervousness about its reception. Eventually, in June 1858, another naturalist, Alfred Russel Wallace, wrote to Darwin of his own similar ideas about how varieties of species gradually depart from an original. To avoid dispute about priority it was decided that summaries of both men’s work should be presented jointly, and this happened at a meeting of the Linnean Society of London on 1 July 1858. Darwin quickly wrote up the abstract and it was published the following year as On the Origin of Species by Means of Natural Selection.

There is now some dispute about the initial impact of Darwin’s book. It did shock many people, and gave rise to some famous public discussions and disputes between scientists and theologians. But perhaps the most surprising thing is just how quickly Darwin’s radical ideas were assimilated into the culture. After all, for many of the Victorians who lived through the period in which Darwin’s evolutionary theory was developed and first disseminated, biology simply did not seem to have much of importance to say about what was truly ‘human’. Being human evoked the mind, consciousness, will, moral feeling, spirit and the nature of the soul. But Darwin’s ideas transformed these notions, reshaping how human beings were understood. The theory of evolution affected not just scientific debate but was soon part of the Victorian imagination, shaping the plots, images and metaphors of its literature and culture. 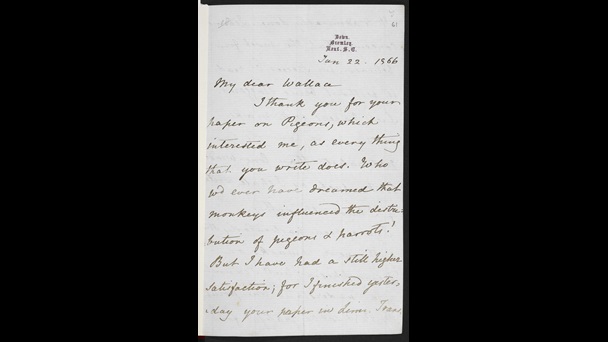 In this letter Darwin writes to Alfred Russel Wallace, a fellow naturalist and professional specimen collector.