The deathbed is an iconic scene in Victorian fiction. Professor John Mullan considers its potential for sentimentality and satire.

There are so many deathbed scenes in 19th-century fiction that it is tempting to think of them as peculiarly Victorian. This is not so. The most widely admired novel of the 18th century, Samuel Richardson’s Clarissa, culminates in what is surely the most protracted deathbed scene in all literature. Cheated by her would-be lover and cruelly disowned by her family, the heroine takes hundreds of pages to perish. Many of Richardson’s first readers experienced it as an ennobling agony. Clarissa dies because she has been raped by the novel’s villain, Lovelace. Before he is killed in a duel, he is punished by being made to read the account of his victim’s slow and holy death. In novels, the point of the deathbed scene is its influence on the living. One of Clarissa’s attendants is the former rake Belford, who corresponds with the villain Lovelace, and whose reform is sealed by his experience. This is a fictionalising of what had for centuries been known as the ars moriendi: writing that taught good Christians how to die well. One of the most popular works in this tradition, Jeremy Taylor’s Holy Living and Holy Dying (1650), was still widely read in the 18th and 19th centuries. Equally, the deaths and dying words of notable individuals were often recorded by witnesses for subsequent publication, provided they could stand as examples to all good Christians.

One of the most successful novels of the 18th century, Laurence Sterne’s Tristram Shandy, was widely admired for its two highly emotive death-bed scenes. In the book’s very first volume, the jesting parson Yorick (something of an alter ego for Sterne) breathes his last while squeezing the hand of his weeping friend Eugenius. It is something different, however, from the deathbeds of Victorian fiction. While emotional, it is also comic: Yorick dies quoting wittily from Don Quixote, and his passing is marked by an entirely black page – an audacious visual joke. The novel’s second deathbed – much anthologised in the years that followed – was more sentimental. Le Fever, a fellow soldier befriended by Tristram’s benevolent uncle Toby, dies with his young son clutching him and Sterne’s syntax imitates his fluttering pulse and the fluttering feelings of his sensitive readers.

Broadside on 'The Dying Christian' 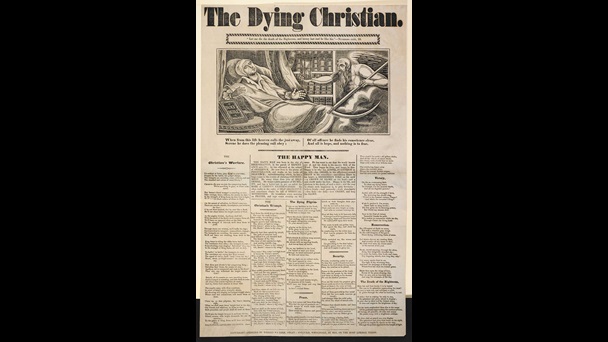 ‘The Dying Christian’, a broadside setting an example of a true Christian death, 1840.

A test of fine feelings

For both readers and characters, then, the fictional deathbed was a kind of test of the finer feelings. One Victorian variation on the theme was the death of a child (amply justified by mortality statistics, but rarely represented in fiction before the mid-19th century). Some of the most calculatedly painful deathbeds in Dickens are those of children: Paul Dombey in Dombey and Son, Jo the crossing sweeper in Bleak House and, most notoriously, Little Nell in The Old Curiosity Shop. To modern sensibilities these have often seemed mawkish, and certainly Dickens was highly manipulative in squeezing the pathos out of them. But we should also realise that, in an age of high infant mortality, they seemed to dignify what many Victorian readers had known and suffered.

Those who die young in Dickens are allowed to give us a hint of immortality. As his life ebbs, Paul Dombey sees his dead mother as if alive again, greeting him. Jo, the impoverished crossing sweeper in Bleak House, dies saying the Our Father. And when ‘Dear, gentle, patient, noble Nell’ has died in The Old Curiosity Shop, Dickens’s illustrator provides an image showing her being taken into Heaven by angels (ch. 71). In Dickens, the deathbed is for the pure of heart, as the novelist turns his gaze on the witnesses. (The vicious or the malign never die in their beds – in Oliver Twist Sikes accidentally hangs himself while pursued by a vengeful mob; in Nicholas Nickleby, Ralph Nickleby deliberately hangs himself in bitter despair.) Other great Victorian novelists took the young person’s death as the test and proof of feeling. In Jane Eyre the heroine’s schoolgirl friendship with Helen Burns is made indelibly affecting by the latter’s death. Helen dies in Jane’s arms, more confident in her religious faith than the narrator can ever be, an example to her in the sufferings that lie ahead. 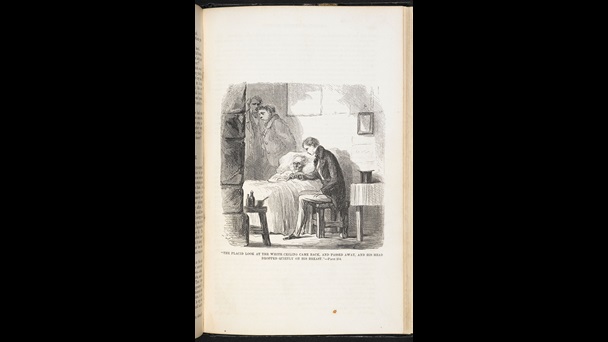 The deathbed scene became irresistible to novelists as a means of releasing the unexpressed emotions of their characters. Emily Brontë’s Wuthering Heights has many impassioned moments, but none more so than the final parting between Cathy and Heathcliff when the latter sees that ‘there was no prospect of ultimate recovery there – she was fated, sure to die’. Medically it is not clear why she is near death, while on the brink of giving birth to her first child. Brontë makes her proximity to death a matter of fate: ‘If I’ve done wrong, I’m dying for it. It is enough!’ (ch. 15). The watching servant Nelly, our narrator, records with a kind of horror the certainty of these two thwarted lovers that death is the only possible consequence of their passion.

It is tempting to believe that Victorian readers had come to expect a deathbed scene, offered as a test of the reader’s sensitivity, in any serious novel. Even such a determinedly unsentimental novelist as Elizabeth Gaskell usually includes such a scene as a climactic episode in each one of her novels. Yet deathbed scenes do not have to be sentimental or tragic. In Middlemarch George Eliot has the rich miser Peter Featherstone lie on his deathbed for weeks, while his relatives gather in the hope of benefiting from his will. We see how Featherstone gets his last pleasure from playing upon (and thwarting) the hopes of these vultures, all of them pretending to care for him but only caring for his money. In Eliot’s hands, the deathbed scene has been turned into satire.

At the end of the century it is transformed in a different way. One of Thomas Hardy’s last and greatest novels take us to the deathbed of its protagonist, but with a refusal of sentiment that is unsettling still, and must have perturbed his first readers. At the conclusion of Jude the Obscure, Jude, worn out by disillusion and despair, lies dying, supposedly tended by his wife Arabella. In the end, however, she is too tempted by the sounds of merriment in the streets of Christminster and abandons him (probably to find a man to replace him in her bed). Helplessly he begs for water, but there is no one to comfort him. Bitterly repeating to himself some lines from the Book of Job, he dies. The tearful set pieces of earlier Victorian fiction seem a distant memory.