Simon Callow CBE examines Dickens as an actor who gave lively and emotional performances of his own works to an enthralled public on both sides of the Atlantic.

Simon Callow discusses Charles Dickens’s performances, his abilities as an actor, and the impact of his readings upon his audiences and the wider public. How did they help make him “the most famous man in the world” during his lifetime? Filmed at the Charles Dickens Museum, London.

Charles Dickens was extraordinary in many ways – in the fertility of his imagination, in his passionate and practical commitment to social justice, and in his vast popularity – but he is quite unique among novelists in his career as a public performer of his own works. There had been novelists who had read their works publicly, but none who had performed them as Dickens did, with full histrionic brilliance, and stage-managed to a point of high theatricality. It is also true that Dickens’s novels, more than any that had preceded them, were uniquely suited to being performed out loud: they were almost like scripts, in the pungency and speakability of the dialogue, and in the vividness of the narrator’s voice. It is almost as if they had been written with performance in mind. In fact, we know from his daughter that when he was at his desk writing, he would often speak the characters’ words out loud, and run to the mirror to check the expressions on his face. Dickens was, in fact, the writer as actor.

Painting of Charles Dickens reading in 1858 by Robert Hannah 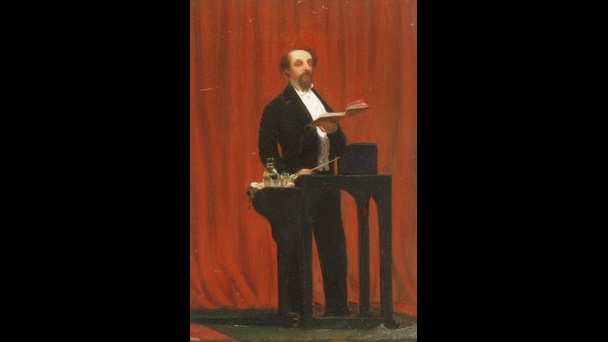 Dickens reading in 1858 by Robert Hannah.

He was a performer from the very beginning. As a very little boy, in Chatham, where he lived till he was 11 years old, he was renowned for his recitations, much encouraged his father, who would set him up on a table so his little audience could get the full benefit. He wrote his first play, Misnar, Sultan of India: a Tragedy at the age of six, playing the leading part and vigorously directing the neighbours’ children. At school in London, he acted in the plays and directed them; and as a young solicitors’ clerk, he sometimes performed in the Minor Theatres, where you could pay to play the role of your choice with a professional company; it must have been a sort of theatrical karaoke. More importantly, during breaks from work, he would hold his fellow employees – and indeed his employers – in stitches with his virtuoso impersonations of local characters. Many of the characters in his early novels, especially The Pickwick Papers, have their origins in these impromptu jeux d’esprit. At the age of 21, heartily sick of the law, he applied for an audition with one of the great actor-managers of the day. He prepared himself very carefully, working hard on monologues by his idol Charles Mathews, who would play dozens of characters in the course of a 10-minute sketch; on the day, he fell ill with an attack of neuralgia and rescheduled the audition. But the moment had passed, and he accepted a job on his uncle’s parliamentary report, which led to Dickens’s career as a journalist, out of which came the Sketches by Boz (themselves often extended character sketches) and his emergence as a novelist with The Pickwick Papers, which brought him worldwide fame almost overnight.

He wrote a couple of slight and uncharacteristic plays for the West End, and continued writing burlesques to be performed by himself and his family, but it was not until 1842, when he was 30, that the urge to perform really seized him again, and he embarked on a series of very high level amateur productions with his close friend John Forster; the cast included some of the most famous writers and painters of the day. Dickens himself dazzled in a number of comic roles, but as he grew older and his view of the world darkened, he pushed his friend the novelist Wilkie Collins into writing tragic roles for him; his performance as the saturnine Richard Wardour in Collins’s The Frozen Deep astounded everyone who saw it, not least Queen Victoria, who always remembered it as the greatest performance she had ever seen in a theatre. Whether in high comedy or in tragedy, Dickens brought his inner needs to the performance; seemed compelled to act his life out in front of an audience. Shortly after The Frozen Deep, when his marriage finally collapsed and he commenced a relationship with the young actress Ellen Ternan (who had appeared in the play with him), he embarked on the Public Readings, partly to earn money, partly for the sheer joy of performance, but above all to connect directly with his public, which he feared might desert him because of the widely reported breakdown of his marriage. He need not have worried.

The Readings were the great theatrical sensation of the day, both in Britain and in the United States of America. He staged them very carefully, building up the audience’s anticipation until he finally made his entrance, to ecstatic acclaim he was not only the most famous author of his day, he was the most famous man, and his readers loved him deeply. When he took his place at the reading desk he had designed, his face framed by gaslight, the audience fell silent; his command was absolute. Not only was he a superb performer, in both tragic and comic sequences, moving the audience alternately to gales of laughter and deep sobs, but his connection with his listeners – who adored him, feeling, as they had always done, that he spoke for them – was palpably intense, the applause at the end thunderous and never-ending. Dickens became addicted to the experience, pushing himself on to give more and more Readings despite ill health and flagging energy; he toured Britain incessantly, and eventually, though he could scarcely walk, the United States of America. When he was at his lowest ebb, physically and mentally, he added a new sequence, the death of Nancy from the last chapter of Oliver Twist, which he rendered with such brutal realism that people fainted; he seemed possessed by the characters and the story, now thuggish as Bill Sikes, now helplessly vulnerable as Nancy, pleading with God for forgiveness. The passage when Sikes clubs Nancy to death again and again and again horrified his listeners and it left him shattered, unable to speak. It is no exaggeration to say that in the end the Readings killed Dickens. 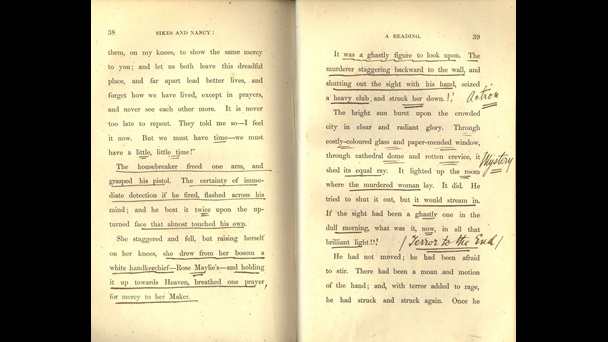 A copy of the version of 'Sikes and Nancy' from which Dickens read at a live performance in 1868. The notes and underlining show where the novelist heightened the horror of the scene. 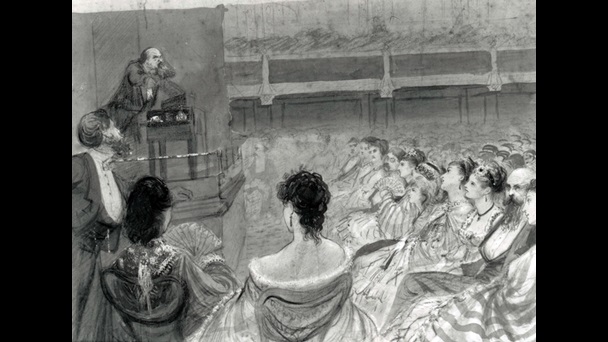 Drawing of Charles Dickens reading the passage from Oliver Twist describing the chilling murder of Nancy by Bill Sikes on 16 March 1870.

The Farewell Season at the St James’s Hall in London in 1869 was heartbreaking. Dickens entered frailly, on sticks, and sat for the reading; up till now he had always stood, commandingly, at the lectern, his voice reaching out to the back of the huge halls, sometimes holding 3,000 people, in which he performed. Now his voice was weak, and sometimes what he said was indistinct, but as he got into his stride, his old energy again possessed him, his famously expressive eyes regained their brightness, and he ignited audience just as he had when he was at his height. At the very last reading of all, he performed A Christmas Carol in the first half, and the trial scene from The Pickwick Papers in the second, with wild comic abandon, impersonating the Lord Chief Justice, who happened to be in the front row of the hall, when he spoke Mr Justice Starleigh’s lines. The applause at the end was overwhelming. Holding up his hand to silence it, Dickens said ‘From the earliest days of my career down to this proud night, I have always tried to be true to my calling. I hope that my public believe that I have as a writer, in my soul and conscience, tried to be as true to them as they have ever been to me. From these garish lights I vanish now forevermore, with a heartfelt, grateful, respectful and affectionate farewell.’ Backstage, he wept bitterly, knowing that he would never again know the joy of losing himself in a role, or of connecting so intimately with his readers, who were, in the end, the great love-affair of his life. Now he would have to connect with them at long-distance, as he had done before, his performances confined to the page. 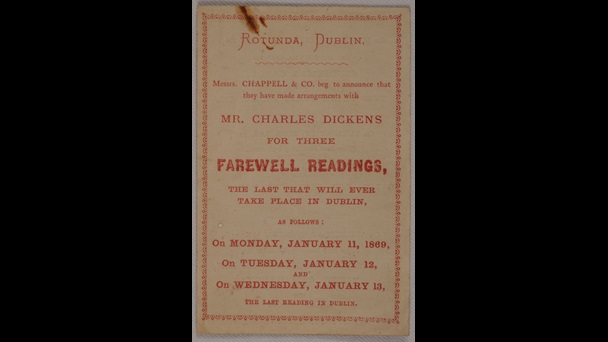 Copy of a ticket sold for Dickens’s final performance in Dublin, 1869. 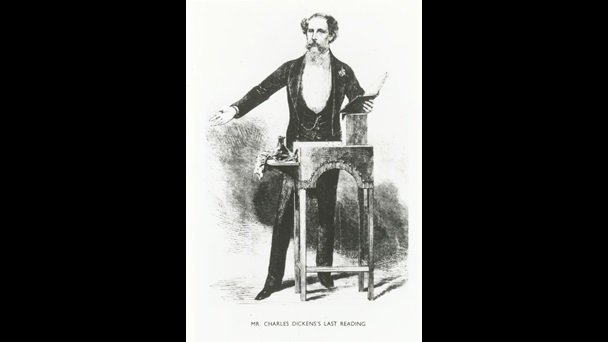 An image of Dickens at his reading table, originally featured in a review of the author’s last reading in The Illustrated London News.

He did not have long. After retiring from the recital platform, he devoted himself to writing The Mystery of Edwin Drood. He never finished it. At the time of his death, at the age of 58, he looked spectral, and was hardly able to walk. But he always managed to rally himself for a performance. Only a week before his death he threw himself into staging a play, vigorously demonstrating to the actors how they should play their roles. “Better to die doing,” he said; and he did.