From industrialisation to slavery, Dr Simon Avery looks at the 19th century social and political issues that fed into Elizabeth Barrett Browning’s poetry.

Elizabeth Barrett Browning (1806–1861) was one of the most famous and prolific poets of the Victorian period, with a career spanning four decades. During this time she established herself as a woman who was never afraid to express her views on contemporary social and political issues, a position which often marked her out as unconventional and combative. While more conservative women poets wrote about nature, pious religion or the domestic space, Elizabeth Barrett Browning wrote about industrialisation, slavery, political leadership, religious controversy, the problems faced by women in society, and what it was like to live in the modern world. She always questioned and judged conventional views and was never concerned that she might offend readers by what she had to say.

Elizabeth Barrett Browning inherited her ideas about what poetry could do principally from the poets of the Romantic period – in particular William Wordsworth, Percy Bysshe Shelley, and her great love, George Gordon, Lord Byron. It was from these figures that she gained a strong belief that poetry had the power to influence social and political thinking. As Shelley famously put it in ‘A Defence of Poetry’, poets were ‘the unacknowledged legislators of the world.’ Beyond poetry, the teenage Barrett Browning declared herself a ‘great admirer’[1] of proto-feminist Mary Wollstonecraft, whose monumental work A Vindication of the Rights of Woman (1792) influenced her views on the position of women in society. Closer to home, her father and brother were politically active in the Whig party – the party which stood in opposition to the Tories and which fought for the legal, civil and religious rights of the individual. It is little wonder, then, that in her commitment to being a professional poet, Barrett Browning saw her role as tackling social and political injustices and arguing for tolerance and liberty. 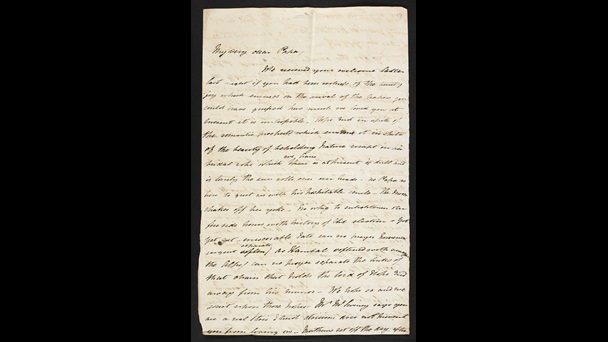 Letter from Elizabeth Barrett Browning as a teenager or young woman to her father, referring to the family’s political activity and the Whig party.

This commitment to writing about social and political concerns developed early in Barrett Browning’s career. Her first published poems, which appeared in journals in 1821–24, were written about the ongoing Greek War of Independence (1821–32) and particularly celebrated Byron’s part in the campaign – a very bold start for a young poet. Her long poem published in 1826, An Essay on Mind, also emphasised in part the idea of the poet being able to bring about political change, while her volumes of the 1830s – Prometheus Bound, and Miscellaneous Poems (1833) and The Seraphim, and Other Poems (1838) – saw her starting to explore other socio-political issues, including the nature of tyranny and freedom, contemporary theological debates, and problems to do with power in sexual relationships, marriage, and the family. It was with her next volume, however, Poems published in 1844, that Barrett Browning really proved her position as a formidable commentator on socio-political issues.

‘The Cry of the Children’

One of the most famous poems of this collection, both in Barrett Browning’s own day and afterwards, is ‘The Cry of the Children’. This poem is a strong attack on industrialisation and was written at a time of increasing concern about the conditions faced by workers in factories and mines – the long hours, the gruelling nature of the work, the lack of basic safety, the poor food, and the expanding slum areas in which the workers lived. Barrett Browning had read about these conditions in a parliamentary report entitled Report of the Royal Commission on the Employment of Children and Very Young People in Mines and Factories, written in part by her friend Richard Hengist Horne. She was so shocked at what she read that she consequently sought to tackle the issues in her own writing and ‘The Cry of the Children’ was the result. 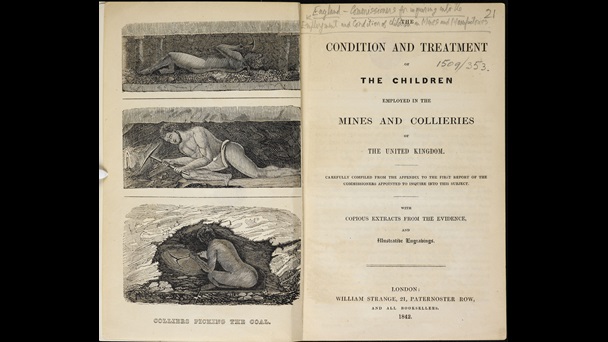 Distressing illustrations of children’s working conditions from a revised edition of the Report of the Royal Commission on the Employment of Children and Very Young People in Mines and Factories, 1842.

It is an astonishing poem in many ways, focusing on children trapped in the exploitative systems of industrialisation, ‘weeping bitterly’ and with ‘pale and sunken faces’ (ll. 10; 25). Alienated from both the nurturing world of nature outside and the figure of the nurturing mother, the children are at the mercy of the brutal factory owner. The sense of the claustrophobia experienced by the children is then powerfully caught in the repetitions of the verse itself:

For, all day, the wheels are droning, turning, –
Their wind comes in our faces, –
Till our hearts turn, – our head, with pulses burning,
And the walls turn in their places.
Turns the sky in the high window blank and reeling,
Turns the long light that drops adown the wall,
Turn the black flies that crawl along the ceiling,
All are turning, all the day, and we with all. (ll. 77–84)

Here Barrett Browning effectively emphasises how the industrial system reduces children to elements in a machine. Yet her condemnation extends much further in the rest of the poem to include Britain more generally – the final stanza is particularly damning of the country turning a blind eye to what is happening – and even, shockingly, to God himself, who she imagines sitting in Heaven, unconcerned and ‘speechless as stone’ (l. 126). Barrett Browning was never afraid to draw attention to what she saw as the problems of state politics or the manipulation of religion to ‘justify’ intolerance or oppression. 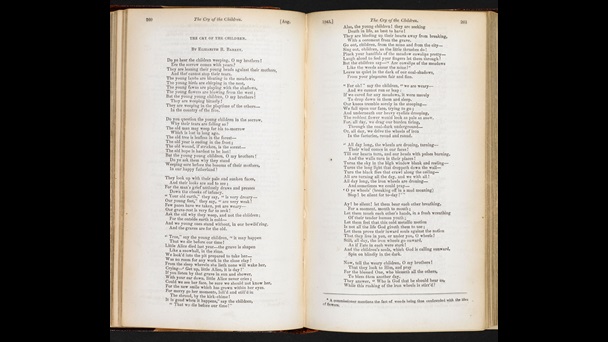 The Cry of the Children’ by Elizabeth Barrett Browning as it was first published in Blackwood’s Edinburgh Magazine, 1843.

‘The Runaway Slave at Pilgrim’s Point’

In 1850, Elizabeth Barrett Browning published a new edition of Poems, which included some additional poems she had written. One of these is her startling attack on American slavery, ‘The Runaway Slave at Pilgrim’s Point’, which she placed next to ‘The Cry of the Children’. This poem is a dramatic monologue spoken by a black female slave, who is torn away from her lover and raped by a group of white slave owners. She subsequently gives birth to a male child but then murders him because he is ‘far too white … too white for me’. The poem therefore emphasises both the brutality of the slave system and the brutality of the sexual exploitation of women, and suggests that these push the woman too into violence. Moreover, as with ‘The Cry of the Children’, Barrett Browning explicitly condemns both established religion and the nation itself for their seeming collusion in – even promotion of – such a system. 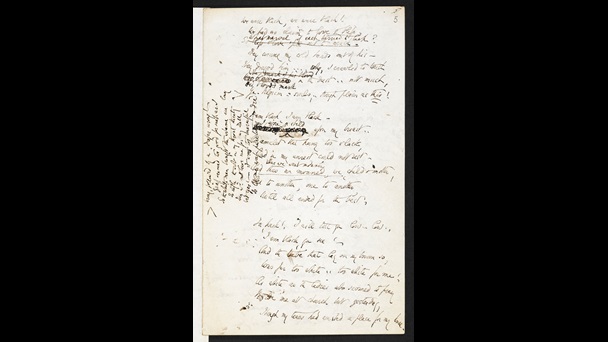 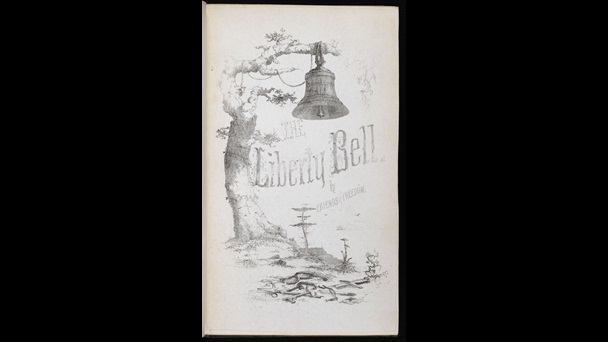 The marginalised and oppressed

Barrett Browning continued to write forthrightly about social and political issues until the end of her career. After her marriage, when living in Florence, she took up the cause of Italy’s struggle for unification (the Risorgimento) in Casa Guidi Windows (1851) and Poems Before Congress (1860). In the major poem of her career, Aurora Leigh (1856), she offered a powerful defence of the right of women to have proper education, meaningful work, and physical and psychological freedom (see the article on Elizabeth Barrett Browning and the Woman Question for more on this). And in other shorter poems she tackled more specific issues, as in ‘A Song for the Ragged Schools of London’ (1854) which she wrote to help raise funds for a school for the poor which her sister Arabella supported. These might, at first glance, seem disparate and unconnected subjects, but they are all part of that key concern with speaking up for the marginalised and oppressed that Barrett Browning repeatedly returned to across the course of her career and which made her one of the period’s most interesting and challenging poets. 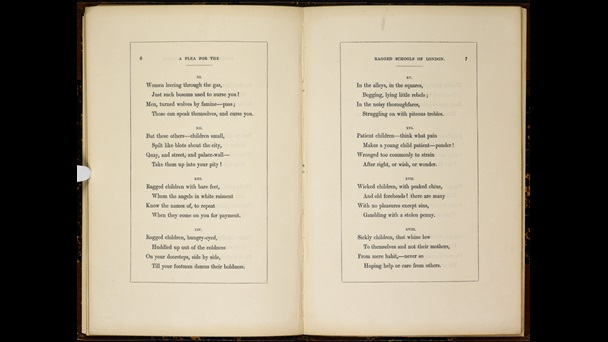 Extract from ‘A Song for the Ragged Schools of London’ written and published by Elizabeth Barrett Browning to raise funds for the cause, 1854.