Exoticism is concerned with the perception and description of difference, or ‘otherness’. Examining One Thousand and One Nights, Jane Eyre and Heart of Darkness, Dr Julia Kuehn discusses the Victorian fascination with literary depictions of the exotic.

Today, we use the term casually – ‘exotic fruits’, ‘exotic hobbies’, ‘exotic dancers’ – but exoticism is actually a complex philosophical, historical and representational issue. Exoticism is concerned with the perception and description of difference, or ‘otherness’. The first philosophical enquiry of 1908-18 remained unfinished: French writer Victor Segalen criticised his contemporaries’ ‘reductive’ understanding of exoticism through geography (tropicalism) and history/ politics (colonialism), but he stopped short of offering a conceptual alternative.[1] It was only from the 1970s, in so-called postcolonial theory, that a fuller philosophy of exoticism would be offered.

One Thousand and One Nights

But Segalen was on to something. Exoticism in 19th-century literature was primarily understood through geographic remoteness and Europe’s (scholarly and political) interests in foreign nations. In Britain, the stories of One Thousand and One Nights – or The Arabian Nights, as the work has also become known after the first anonymous English translation of 1706 – were an example of the concurrent scholarly preoccupation with ‘Arabia’, an intensifying political interest, and the simple desire for good stories. The tales with which Sheherazade entertains the Persian King Shahryar to postpone her pending execution – including those of Aladdin, Ali Baba and the Forty Thieves, and Sinbad the Sailor – were incredibly popular with 19th-century readers. They offered fantastic characters (genies, mermaids, talking serpents and trees), curious tools (magic carpets and lamps) and a wide range of narrative genres (horror, crime, fantasy and even science fiction). For Romantic and Victorian writers like Coleridge, de Quincey, Scott, Dickens, Thackeray, Collins, Gaskell and Conan Doyle, The Arabian Nights thus stood for the wonderful against the mundane, and the imaginative against the prosaic and rational. On the other hand, the stories referenced real people and a real geography: many readers were thus led to believe that Sheherazade’s tales actually gave a faithful account of the Orient.

Europe’s colonial ambitions and activities were ongoing in the 19th century, and even Charlotte Brontë in the Yorkshire hinterland would have been ‘extraordinarily well aware of th[is] fact’, as postcolonial critic Edward Said has argued in Orientalism (1978), with ‘definite views on race and imperialism’ materialising in her novels.[2] In Jane Eyre  (1848), the title heroine learns on her wedding day that, 15 years earlier, her intended husband Mr Rochester was married in Jamaica. His first wife’s West Indies (sugar plantation) background is ideologically linked with notions of an exotic-erotic, primitive colonial otherness: Bertha Mason, who is of mixed European and Caribbean heritage, not only turns out to be ‘gross, impure, depraved’ and of a ‘common mind’ but her initial passion and sensuousness become, after her marriage, the irrational ravings of a ‘lunatic’ and ‘demon’ so that Rochester locks her away in the attic of his estate Thornfield (Charlotte Brontë, Jane Eyre, Chapter XXVII). Another exotic background in the novel concerns Madeira, off the western coast of Africa, where Jane’s uncle John Eyre works as an agent for a Jamaican wine manufacturer. When he dies, he leaves £20,000 to his niece, and there is the unspoken implication that this money was probably tangled up with the slave trade. Hence a colonial mind-set plays a central part in Jane Eyre, as does the missionary project. At the end of the novel, with Jane legally married to widower Rochester, and mother of his children, Jane’s cousin, St John Rivers, is dying in India: his attempts to convert and ‘civilise’ the Indians left their mark on him. Faraway exotic colonies and activities provide for Jane, almost destroy Rochester, treat Bertha cruelly and kill St John – in a novel that is only on the surface extremely English.

Depictions of the exotic in Heart of Darkness

Jane Eyre’s backdrop of exoticism is moved to the forefront of the action and of critical contemplation in Joseph Conrad’s novella Heart of Darkness (1899). Here, Englishman Charles Marlow enters the services of a Belgian trading company in (although never explicitly identified) the Belgian Congo. Told to take a ship upriver and bring back the company’s most successful but now sick trader, Mr Kurtz, as well as the ivory he has accumulated through ‘trade’ with the natives, Marlow learns of Kurtz’s depraved practices, his tyrannical rule over the natives, and his relationship with an African woman. Kurtz’s perhaps initial faith in the western ‘civilising mission’ in the ‘dark’ places of the world (see St. John Rivers) has degenerated into self-aggrandisement, greed, a hatred of the Africans and a diseased mind and soul. Marlow is shocked to see ‘The horror! The horror!’ of colonial reality, but unable to do anything about it (Conrad, 178). 19th-century readers struggled to pinpoint the novella’s complex morals: Kurtz’s descent into corrupt colonial practices is both despicable and tragic, the ‘good guy’ Marlow lies to Kurtz’s fiancée about the extent of colonial evil, and author Conrad employs several layers of textual framing, perspectives and narrative (un)reliability to obscure his personal attitude towards colonialism. African writer Chinua Achebe was clearer when he, in a 1975 lecture, denounced Conrad and the novella. To him, Conrad’s portrayal was dehumanising and degrading as the colonised Africans are seen as animalistic and devoid of speech, and are de-individualised and lumped together into one dark group in the story’s jungle background.

Heart of Darkness, as first published in Blackwood's Edinburgh Magazine 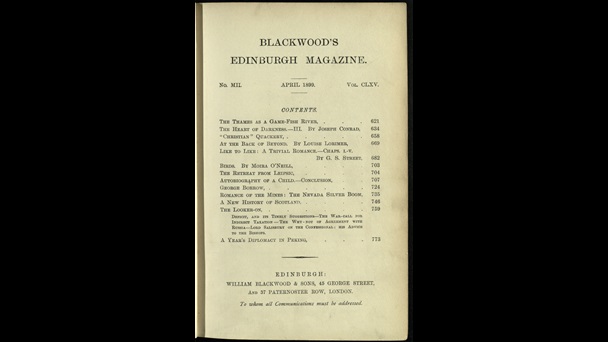 Heart of Darkness – the 1899 novella about a merchant boat in the Congo – is an exploration of colonialism and racism.

Achebe’s intervention is an important reminder of how 19th-century exoticism worked on the whole, namely ‘for a purpose, according to a tendency, in a specific historical, intellectual, and even economic setting’ (Said, 273). Exotic representations rarely give the ‘truth’ or ‘reality’ about a foreign culture but are aesthetic, subjective utterances produced in a specific historical – in the 19th century, colonial – context.