Gender roles in the 19th century

From marriage and sexuality to education and rights, Professor Kathryn Hughes looks at attitudes towards gender in 19th-century Britain.

During the Victorian period men and women’s roles became more sharply defined than at any time in history. In earlier centuries it had been usual for women to work alongside husbands and brothers in the family business. Living ‘over the shop’ made it easy for women to help out by serving customers or keeping accounts while also attending to their domestic duties. As the 19th century progressed men increasingly commuted to their place of work – the factory, shop or office. Wives, daughters and sisters were left at home all day to oversee the domestic duties that were increasingly carried out by servants. From the 1830s, women started to adopt the crinoline, a huge bell-shaped skirt that made it virtually impossible to clean a grate or sweep the stairs without tumbling over.

The two sexes now inhabited what Victorians thought of as ‘separate spheres’, only coming together at breakfast and again at dinner.

The ideology of Separate Spheres rested on a definition of the ‘natural’ characteristics of women and men. Women were considered physically weaker yet morally superior to men, which meant that they were best suited to the domestic sphere. Not only was it their job to counterbalance the moral taint of the public sphere in which their husbands laboured all day, they were also preparing the next generation to carry on this way of life. The fact that women had such great influence at home was used as an argument against giving them the vote.

Women did, though, require a new kind of education to prepare them for this role of ‘Angel in the House’. Rather than attracting a husband through their domestic abilities, middle-class girls were coached in what were known as ‘accomplishments’. These would be learned either at boarding school or from a resident governess. In Jane Austen’s Pride & Prejudice the snobbish Caroline Bingley lists the skills required by any young lady who considers herself accomplished:

A woman must have a thorough knowledge of music, singing, drawing, dancing, and the modern languages … ; and besides all this, she must possess a certain something in her air and manner of walking, the tone of her voice, her address and expressions … (ch. 8)

As Miss Bingley emphasizes, it was important for a well-educated girl to soften her erudition with a graceful and feminine manner. No-one wanted to be called a ‘blue-stocking’, the name given to women who had devoted themselves too enthusiastically to intellectual pursuits. Blue-stockings were considered unfeminine and off-putting in the way that they attempted to usurp men’s ‘natural’ intellectual superiority. Some doctors reported that too much study actually had a damaging effect on the ovaries, turning attractive young women into dried-up prunes. Later in the century, when Oxford and Cambridge opened their doors to women, many families refused to let their clever daughters attend for fear that they would make themselves unmarriageable. 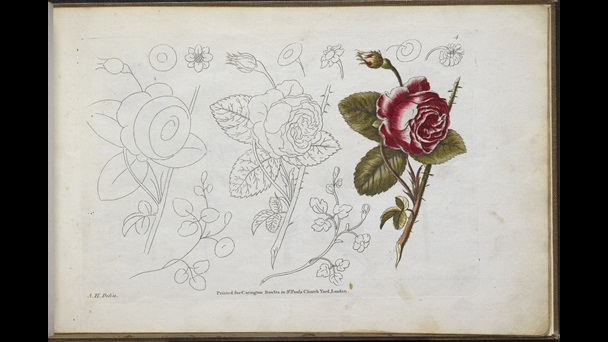 Bowles’s Drawing Book for Ladies is a manual for drawing or embroidering flowers. Drawing and embroidery were part of a conventional female education in the 18th and 19th centuries.

At the same time, a young girl was not expected to focus too obviously on finding a husband. Being ‘forward’ in the company of men suggested a worrying sexual appetite. Women were assumed to desire marriage because it allowed them to become mothers rather than to pursue sexual or emotional satisfaction. One doctor, William Acton, famously declared that ‘The majority of women (happily for them) are not very much troubled with sexual feeling of any kind’.

Girls usually married in their early to mid-20s. Typically, the groom would be five years older. Not only did this reinforce the ‘natural’ hierarchy between the sexes, but it also made sound financial sense. A young man needed to be able to show that he earned enough money to support a wife and any future children before the girl’s father would give his permission. Some unfortunate couples were obliged to endure an engagement lasting decades before they could afford to marry.

If a young man was particularly pious he might manage to stay chaste until he married. Many respectable young men, however, resorted to using prostitutes. All the major cities had red light districts where it was easy to find a woman whom you could pay for sex. Out-of-towners could consult such volumes as Roger Funnyman’s The Swell’s Night Guide through the Metropolis. Unfortunately syphilis and other sexual diseases were rife, and many young men unwittingly passed on the infection to their wives. For those unlucky enough to develop full-blown tertiary syphilis, the result was a painful and lingering death, usually in the mid-40s. 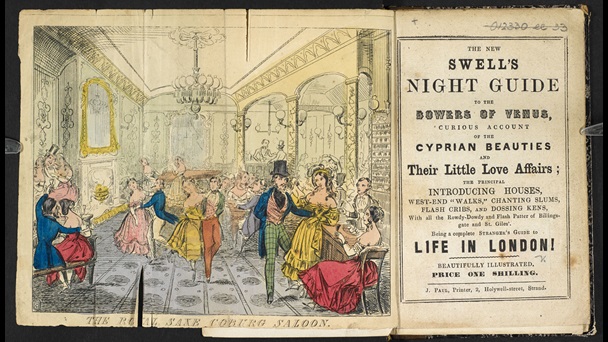 The New Swell’s Night Guide, a guide to finding and approaching actresses and prostitutes, estimated 1840. 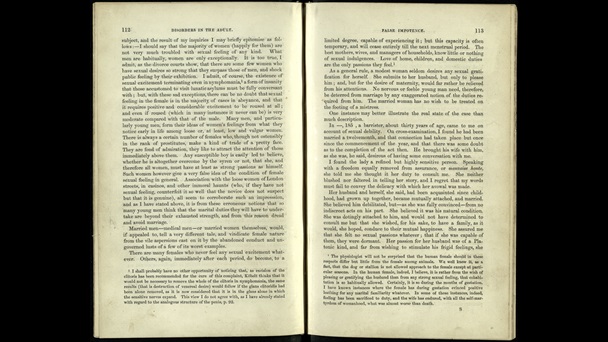 ‘the majority of women (happily for them) are not very much troubled by sexual feelings of any kind’: from William Acton’s medical text, The Functions and Disorders of the Reproductive Organs, 1857.

Young and not-so-young women had no choice but to stay chaste until marriage. They were not even allowed to speak to men unless there was a married woman present as a chaperone. Higher education or professional work was also out of the question. These emotional frustrations could lead to all sorts of covert rebellion. Young Florence Nightingale longed to be able to do something useful in the world, but was expected to stay with her mother and sister, helping supervise the servants. She suffered from hysterical outbursts as a teenager, and could not bear to eat with the rest of the family. Elizabeth Barrett, meanwhile, used illness as an excuse to retreat to a room at the top of her father’s house and write poetry. In 1847 Charlotte Brontë put strong feelings about women’s limited role into the mouth of her heroine Jane Eyre:

women are supposed to be very calm generally: but women feel just as men feel; they need exercise for their faculties and a field for their efforts as much as their brothers do; they suffer from too rigid a restraint, too absolute a stagnation, precisely as men would suffer; and it is narrow-minded in their more privileged fellow-creatures to say that they ought to confine themselves to making puddings and knitting stockings, to playing on the piano and embroidering bags. (ch. 12)

This passage was considered so shocking that conservative commentators such as Lady (Elizabeth) Eastlake in a famously scathing review of Jane Eyre likened its tone to Chartism, the popular labour movement that advocated universal suffrage.

In her review – which also covered William Thackeray’s Vanity Fair – Lady Eastlake took a strong dislike to the sexual ambition of Jane Eyre and Becky Sharp, both of whom end up marrying into the households by which they are employed. The figure of the governess was unsettling, especially in literature, because it drew attention to the fact that not all Victorian women were as sexless as Dr Acton had suggested. 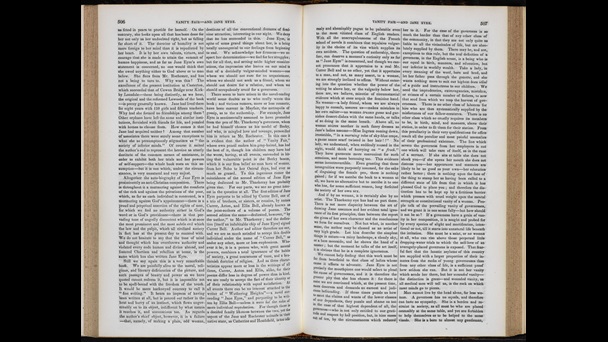 The prostitute was the shadow that haunted the well-run middle-class home. She serviced the needs of the men of the house, not just before marriage but sometimes during it too. Just like the men she slept with, but unlike their wives, the prostitute was a worker in the economic market place, exchanging services for cash. Doctors such as Acton were extremely worried by the ‘problem’ the prostitute presented, in particular the way she spread sexual disease amongst the male population. For this reason Contagious Diseases Act were instituted from 1860 which allowed, in certain towns, for the forced medical examination of any woman who was suspected of being a sex worker. If she was found to be infected she was placed in a ‘Lock Hospital’ until she was cured. A reform movement led by Josephine Butler vigorously campaigned for a repeal of the acts, arguing that it was male clients, as much as the prostitutes, who were responsible for the ‘problems’ associated with prostitution.

Many charities were instituted to help reform prostitutes. Charles Dickens even collaborated with the philanthropist Angela Burdett-Coutts to set up a ‘Magdalen House’ which would prepare girls for a new life in Australia. Despite these efforts, prostitution continued to flourish for as long as there were bachelors who were prevented by economy from marrying until their late 20s, and working-class women who desperately needed to make money to raise their own children. 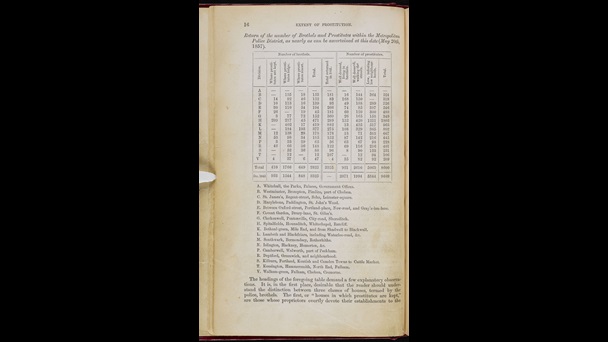 Table showing William Acton’s estimated figures of brothels and prostitutes in London, May 1857.