Why do so few of George Eliot’s female characters fulfil their potential? Professor Kathryn Hughes considers Eliot’s attitudes towards women’s rights, education and place in society, and how she expresses these in her novels.

But the effect of her being on those around her was incalculably diffusive: for the growing good of the world is partly dependent on unhistoric acts; and that things are not so ill with you and me as they might have been, is half owing to the number who lived faithfully a hidden life, and rest in unvisited tombs. (Middlemarch, Finale)

At the very end of Middlemarch George Eliot tells us what happened in later life to her heroine, Dorothea Brooke. As a young woman at the beginning of the novel, Dorothea is likened to St Teresa of Avila, the 16th-century mystic and social reformer who longed to change the world for the better. Dorothea, though, has been born three centuries too late. She lives in a grossly materialistic age in which there is ‘no coherent social faith and order which could perform the function of knowledge for the ardently willing soul’ (Prelude).

Consequently, Dorothea ends her life as a married woman whose name no one will remember. But Eliot warns the reader against feeling disappointed that such a remarkable creature should be condemned to a humdrum existence. Dorothea may not have achieved obvious greatness, but her ‘unhistoric acts’ of everyday kindness have had a profound effect on the people within her domestic circle (Finale). The role of mother, wife and friend was, in the circumstances, the best available to her. 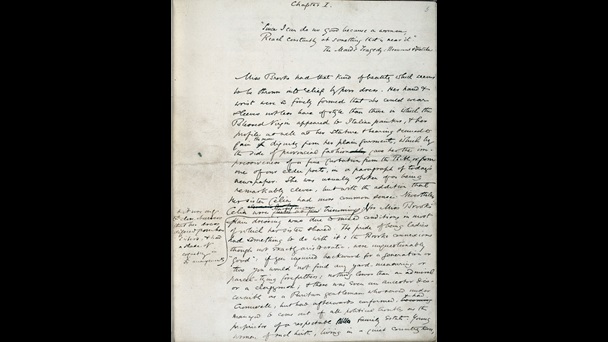 First page of Chapter One from the manuscript copy of Middlemarch.

Eliot began working on what would become Middlemarch in 1869, the same year that J S Mill published The Subjection of Women, his passionate call for women to be allowed the same social, political and economic rights as men. With women’s emancipation at the forefront of public debate – two years previously Mill had failed to amend the 1867 Reform Bill so that women could vote – it was inevitable that the fictional Dorothea’s fate would cause a stir. For some readers, both men and women, Eliot’s refusal to grant her heroine a glorious ending in line with her extraordinary qualities seemed a betrayal of feminist principles. In an 1873 review in the Revue des Deux Mondes, T H Bentzon mourned the fact that Dorothea ‘allow[s] her life, which should have been consecrated to the whole of humanity, to be absorbed within the life of one other person’.

The Subjection of Women by J S Mill 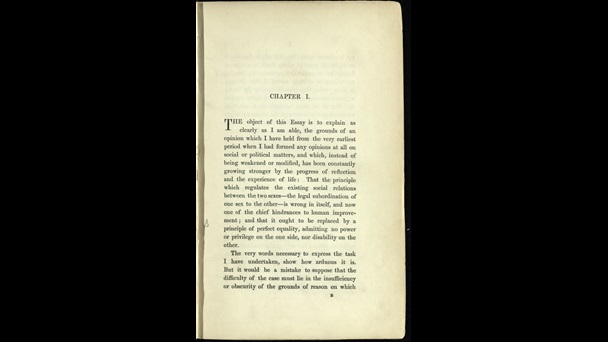 Mill's essay The Subjection of Women was published in 1869, the year Eliot started work on Middlemarch. In it, Mill argues that 'the legal subordination of one sex to the other' is 'wrong in itself, and now one of the chief hindrances to human improvement'.

But Eliot never was a feminist, at least not in the way we understand the term today. Always suspicious of sudden social change and political intervention, she kept aloof from the many public campaigns of the 1850s, 60s and 70s to improve women’s lives; she did not, for example, think that women needed the vote. Eliot’s close friend Barbara Leigh Smith Bodichon was instrumental in setting up Girton College at Cambridge in 1869, and in the years before its founding Eliot wrote in a letter that she would ‘rejoice if the idea of a [woman’s] college [could] be carried out’.[1] She donated money and books to Girton – but she also expressed reservations about the consequences of women’s education, and was certainly far less involved in the college’s founding than many other women in her circle. For many people, both then and now, Eliot’s ambivalence is doubly odd given the way that she chose to live her own life. Not only was ‘George Eliot’ one of the highest earning women in Britain, she also scandalously lived with a married man, the science writer G H Lewes, who was unable to obtain a divorce from his wife. 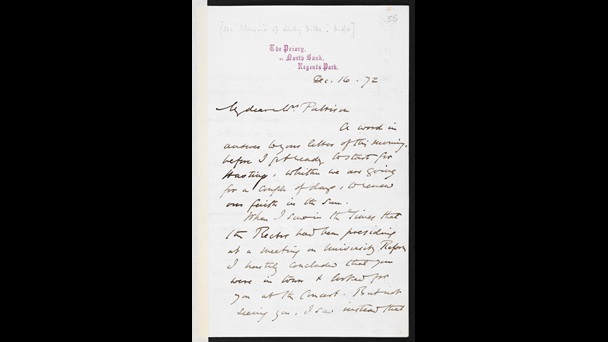 Though few of Eliot's female characters achieve creative and personal fulfilment, she enjoyed both with her partner, the critic and philosopher G H Lewes. In this letter to her friend Emilia Pattison, she describes their intellectual collaboration and writes that they 'must be among the happiest' people in the world.

The unhappy endings of Eliot’s women

Over the decades since Eliot’s death in 1880 many readers have complained about the fates of her female characters. Dinah Morris from Adam Bede meekly gives up preaching on the village green when the Methodist Church tells her that women no longer have the right to share the word of God in public. Armgart, the eponymous heroine of Eliot’s long dramatic poem of 1871, is punished for putting her opera career over love by losing both her would-be husband and her voice. The clever and passionate Maggie Tulliver, a character with whom so many young women readers have identified, is sent to a watery death at the end of The Mill on the Floss. 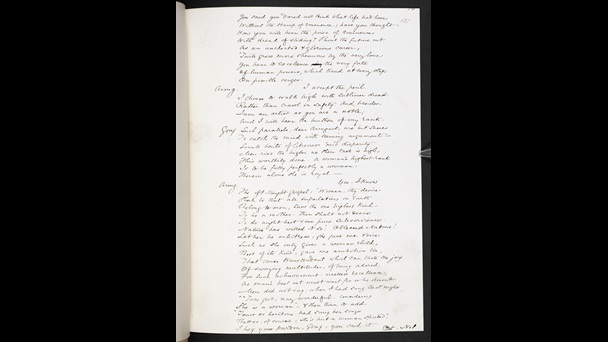 Manuscript of Eliot’s dramatic poem ‘Armgart’, in which a woman has to choose between marriage and her career as an opera singer.

Also worrying is the way in which Eliot deals with her less likeable female characters. If the ‘good girls’ are left to languish in mediocrity or silence, the ‘bad girls’ have it even worse. Hetty Sorrel, the flirtatious dairymaid in Adam Bede who murders her illegitimate baby, is punished with a death sentence commuted at the last moment to transportation. This despite the fact that, in the mid-Victorian period when Eliot was writing the book, there was a growing public feeling that young women who had been seduced and abandoned should have the right to ask the man for financial support – an arrangement that might have stopped Hetty murdering her child. The manipulative Rosamond Vincy in Middlemarch, meanwhile, is destined to see out her middle years in a miserable, sterile marriage to the surgeon Tertius Lydate, whose promising life and career she has ruined with her vacuous demand that he earn enough to keep her fine china rather than concentrate on his medical research.

But George Eliot doesn’t simply dole out arbitrary fates to her good and bad female characters. It was exactly that kind of nursery tale morality that she had satirised in ‘Silly Novels by Lady Novelists’, an essay about the commercial women’s fiction of the 1850s, written during her days as a journalist at the Westminster Review. Instead, Eliot wants to explore how social environment acts to produce different outcomes for young women who, on the surface, seem to have been born in almost the same circumstances. In the manner of an experimental scientist, she pairs Dorothea Brooke with Rosamond Vincy, Hetty Sorrel with Dinah Morris and Maggie Tulliver with Lucy Deane – and then watches how differences in their upbringings result in the formation of their contrasting adult characters. 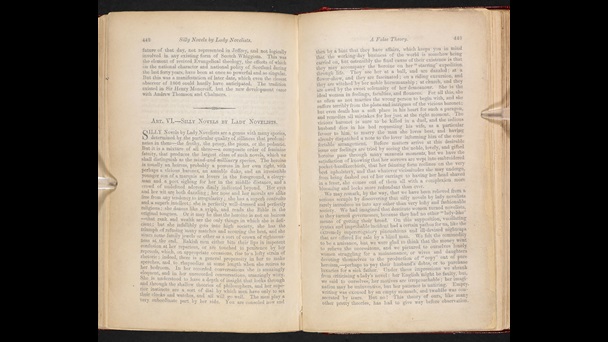 The most obvious of these differences concerns parental expectation about what a girl should and shouldn’t be. Mr Tulliver in The Mill on the Floss declares himself worried by Maggie’s obvious intelligence: ‘But it’s bad – it’s bad. A woman’s no business wi’ being so clever; it’ll turn to trouble, I doubt’ (ch. 3). Later Mr Stelling, tutor to Maggie’s less academic brother Tom, assures everyone that although girls have a superficial quickness, they are not cut out for formal education. As a result Maggie grows up feeling that there is a world of art and culture from which she has been excluded. Her lack of intellectual fulfilment produces a restlessness that leads her to the disastrous decision to set off up the river with Stephen Guest. In Middlemarch, meanwhile, Rosamond Vincy’s education at Mrs Lemon’s finishing school has mostly consisted of instruction in the art of ‘getting in and out of a carriage’, music, and ‘propriety of speech’ (ch.11). None of this helps her in making a realistic assessment of who she should marry or how she would live.

Those readers who have criticised Eliot for the way she ascribes harsh outcomes to her ‘bad’ girls – Hetty, Rosamond and even Gwendolen Harleth in Daniel Deronda – are perhaps over-hasty. While there is no doubting her attitude to their solipsism and selfishness, Eliot is always insistent that it is a poor environment rather than wilful wickedness that has led to these mangled and unhappy adult lives. Hetty is repeatedly likened to a baby or an animal – both creatures without agency – while Rosamond is frequently ‘poor Rosamond’. As readers we are asked to think deeply about whether or not we can truly hold these young women accountable for their actions, given the way in which their moral development has been stunted by the expectations of their immediate family environment and the wider society.