An introduction to 'In Memoriam A.H.H.'

Tennyson wrote 'In Memoriam A.H.H.' as a tribute to his beloved friend Arthur Henry Hallam, who died aged 22. Dr Holly Furneaux explores how the poem uses individual bereavement to grapple with broader questions of faith, meaning and nature.

In Memoriam A.H.H. is the extended, fragmentary elegy that Tennyson wrote for his closest friend Arthur Henry Hallam, after Hallam’s sudden death at age 22. Scholars agree that this was the most important event in Tennyson’s life, and the one which most shaped his work. In Memoriam combines the expression of a deeply personal experience of intense male friendship and mourning with discussions of public concerns, including major debates of the day about science and religion. 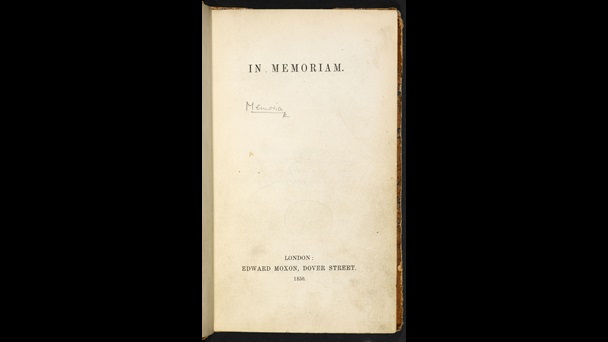 Tennyson’s anonymity puts the emphasis on the memorialised A.H.H, with his death date, and the layout and content is reminiscent of a grave stone. In Memoriam can be read as a kind of mourning monument in verse, a species of poetic therapy.

There is a mis-match between the elaborate public memorials, tombstones and funerary ritual of the period, and the private experience of grief. Tennyson reflects on this paradox, asking whether the publication of his own feelings can ever be justified. In section 21 he imagines critical voices; one says ‘He loves to make parade of pain/ That with his piping he may gain/ the praise that comes to constancy’, while another asks whether, in a busy age of political unrest and scientific discovery, a man’s love of another is a legitimate subject for poetry: ‘Is this an hour/ for private sorrow’s barren song?’

In section 5 Tennyson explores the problems of a public articulation of grief:

I sometimes hold if half a sin
To put in words the grief I feel;
For words, like Nature, half reveal
And half conceal the Soul within.


But, for the unquiet heart and brain,
A use in measured language lies;
The sad mechanic exercise,
Like dull narcotics, numbing pain.


In words, like weeds, I’ll wrap me o’er,
Like coarsest clothes against the cold:
But that large grief which these enfold
Is given in outline and no more.

The first stanza reveals anxiety about making the private public, an act which feels like sinning against the intensity of a feeling that can never be fully revealed in words. The writing of poetry, though, we see in stanza two, has a pain-killer effect as the author experiences the narcotic effects of writing in such a regular form, a ‘mechanic exercise’ in ‘measured language’. In Memoriam has an almost relentlessly regular meter and rhyme scheme. It is in iambic tetrameter: four sets of iambs (an unstressed followed by a stressed syllable, da dum). This regular rhythm echoes the involuntary biological processes of breath or heartbeat, the unwilled organic functions that keep him going, despite the ravages of grief. The slight deviation in the first line of stanza 2 – the comma, and the possibility of speaking ‘unquiet’ with either 2 or three syllables – disrupts the monotony of the rhythm, reflecting the restlessness of heart and brain described here.

The regular ‘abba’ rhyme scheme – used so memorably throughout this poem that it is now often called the IM stanza – encloses the central rhyme within the first and final lines. Stanza one offers a particularly good example of this; content exactly compliments form, as the revealed feeling is contained within the heart of the verse. 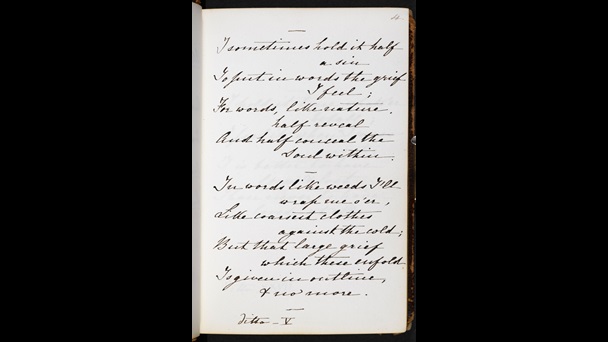 'I sometimes hold it half a sin': lyric 5 copied out by Queen Victoria after Prince Albert's death in 1861.

In Memoriam insistently emphasises the desire for physical contact between the two men, the longing for a touch of hands, chests, lips. Contemporary reviewers responded anxiously to the poem’s homoeroticism; an early review in The Times complained about the tone of ‘amatory tenderness. Surely this is a strange mode of address to a man, even though he be dead.’ While some dispute that the longing for touch is an erotic one, the poem is clearly queer in the way that Tennyson slips between subject positions. He readily identifies with a young girl waiting desperately for the arrival of the man she loves (lyric 6), with a forsaken male lover (lyric 8), and talks of himself as being like ‘some poor girl whose heart is set/ on one whose rank exceeds her own’. In poem 97 he sees an elderly couple and is reminded of his relationship with Hallam, and in an especially moving section Tennyson equates his tears to those shed by a widower, waking from a dream of his wife but finding her place empty in the bed:

Tears of the widower, when he sees
A late-lost form that sleep reveals,
And moves his doubtful arms and feels
Her place is empty, fall like these (lyric 13, lines 1–4).

In these multiple identifications Tennyson moves between gender position, age, and social status, refusing to be fixed or defined by the usual systems of marking identity.

Tennyson’s movement between gender positions, parallels the other oscillations of the poem; its movement between despair and consolation and cyclical rhyme pattern. The ABBA rhyme scheme, in which the reader has to go back on herself to find the rhyme, and Tennyson’s initial title for the poem, Fragments of an Elegy, are good reminders that this poem as a whole does not a straightforward (teleological) progress from grief to acceptance and consolation. The poem, as Tennyson tells us in section 48, is not intended to give us any easy answers; it resists resolution, both of grief, and of pressing religious and scientific questions. 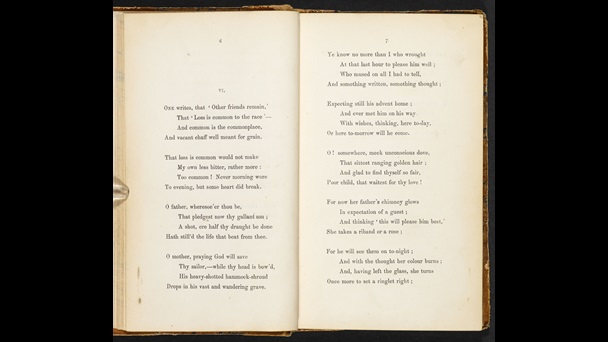 Lyric 6 from In Memoriam shifts between gender positions; here, the speaker identifies as  a young girl waiting for the man she loves. 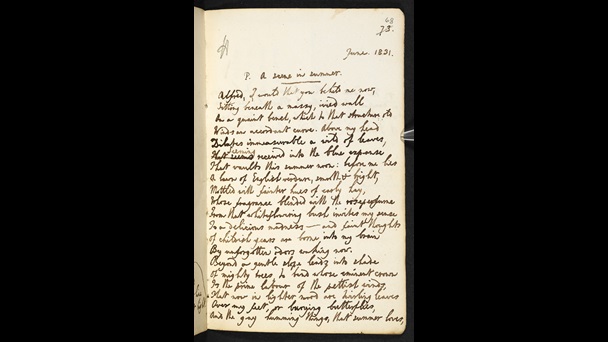 In the central lyrics of 55 and 56, Tennyson considers the theory of natural selection long before Darwin made it famous in On the Origin of Species (1859). According to this theory, certain species, be they plant or animal, prove to be better adapted to their environment, and so survive at the expense of other species, here described as types. The poet considers Nature to be ‘so careful of the type ... So careless of the single life’ (55, stanza 2), reflecting on the impersonal, amoral processes of the natural world in which types of species evolve without heed of the individuals who are extinguished along the way. This wanton waste of potential life – ‘of fifty seeds’ Nature often allows only one to bear fruit – offers an allegorical expression of the waste of potential in the early death of Hallam. This seemingly senseless loss leads him to ‘falter where I firmly trod’ on the ‘world’s altar stairs/That slope thro’ darkness up to God’. At the close of this lyric he has recourse to feelings which are posited against scientific discoveries, and he ‘faintly’ reasserts his trust that at length the human race will be spiritually redeemed. In section 56, even that faint hope is crushed as Nature is personified as, famously, ‘red in tooth and claw’. The savage voice of Nature avers that thousands of species have been wiped out; the holy spirit is reduced to mere ‘breath’, and man to ‘desert dust’.

These lyrics offer a response to Tennyson’s reading of the groundbreaking work of Charles Lyell, the founding father of modern Geology. Lyell’s Principles of Geology (1830–1833) used fossil evidence to shown that the present state of the earth is the result of natural forces – wind, water erosion, sedimentation over long periods of time. He made a case for the extinction of species after species, throughout the earth’s history, as species found themselves unable to cope with changing physical conditions. The challenge of Lyell’s work to Christianity was that the earth was, according to his geological findings, much older that the account given in Genesis.

The shattering of certainties that bereavement can produce resonates with the profound reconsideration of God and world in the mid-nineteenth century. Tennyson’s poem masterfully brings these concerns together in a poem that was an apt favourite of a grief-stricken queen, and continues to speak to our senses of loss, doubt and hope today.