Jane Austen’s characters are continually watching, judging and gossiping about others and, in turn, are watched, judged and gossiped about. Professor Kathryn Sutherland explores the ways in which behaviour and etiquette are closely monitored in the novels, and how characters must learn to be skilful readers of those around them.

Jane Austen depicts a society which, for all its seeming privileges (pleasant houses, endless hours of leisure), closely monitors behaviour. Her heroines in particular discover in the course of the novel that individual happiness cannot exist separately from our responsibilities to others. Emma Woodhouse’s cruel taunting of Miss Bates during the picnic at Box Hill and Mr Knightley’s swift reproof are a case in point: ‘“How could you be so insolent in your wit to a woman of her character, age, and situation? – Emma, I had not thought it possible.”’ Emma is mortified: ‘The truth of his representation there was no denying. She felt it at her heart.'  Austen never suggests that our choices in life include freedom to act independently of wider obligations. If we are fortunate (as Emma is), we have a duty of kindness and protection to those who are not; society, in the form of public opinion or the judgement of other individuals, like Mr Knightley, provides a check on conduct. ‘“[Miss Bates’s] situation”’, argues Mr Knightley to Emma, ‘“should secure your compassion”’ (ch. 43). 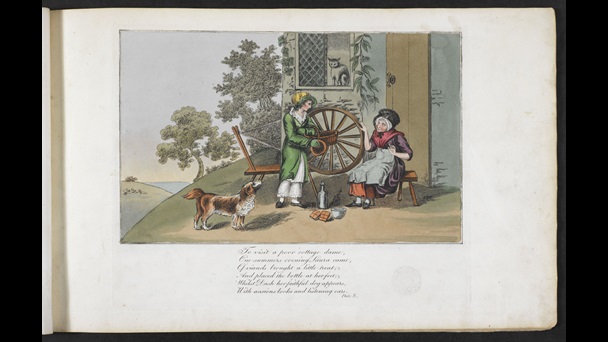 The Elegant Girl (1817) is a collection of engravings showing suitable activities for a wealthy young girl. Here, she brings food and drink to the needy.

One of the reasons Austen’s world charms us is because it appears to follow stricter rules than our own, setting limits on behaviour. There are precise forms of introduction and address, conventions for ‘coming out’ into society (meaning a young girl’s official entry into society and therefore her marriageability), for paying and returning social visits, even for mixing with different social ranks. Pride and Prejudice, Emma and Persuasion are sensitive to questions of social status and can all be seen extending the definition of polite society to include previously excluded members of the professional and merchant classes and the navy. Above all, relations between young men and women are carefully monitored. One reason dance scenes are so prominent in Austen’s novels is that the dance floor was, in her time, the best opportunity for identifying romantic partners and for advancing a courtship, for testing relations between the sexes. But even the comparative freedom of a dance had its rules and etiquette: for the number of dances one might have with a single partner (only two); for the (limited) amount of bodily contact between partners; while a woman’s refusal of one partner effectively disallowed her from dancing with another. At the edges of the dance floor were the chaperones and those sitting the dance out, who watched, noticed and interpreted behaviour. 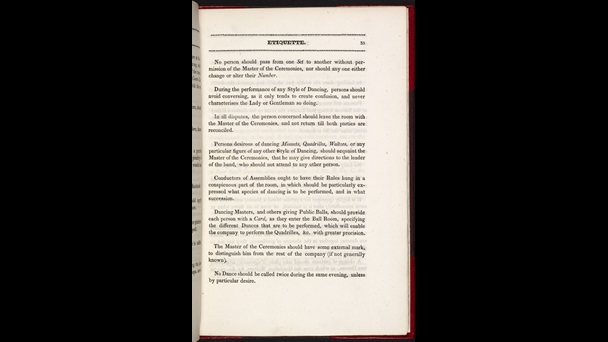 Pride and Prejudice unfolds as a series of public or semi-public events – assemblies, balls, supper parties, country-house gatherings – each one followed by anxious reviews shared by two people in private as they analyse its events. Charlotte Lucas and Elizabeth Bennet, Elizabeth and Jane Bennet, Elizabeth and Mrs Gardiner are discovered reading the behaviour of others, interpreting motives and intentions. In all her novels Austen portrays a society that closely restricts mental and physical space, particularly for women, who are allowed little solitude or independence. Many of the crucial events of an Austen plot take place indoors or in the confining presence of a number of people. Frequently the plot moves forward by means of overheard conversations; rumour plays a large part in transmitting and distorting news (think of the various speculations that swirl around Jane Fairfax in Emma); and everybody appears to be a gossip. The resolution of the plot of Persuasion at the White Hart in Bath develops from a group of people confined in a small space (a room in a hotel), conducting several private conversations and activities and overhearing, observing and reacting openly or covertly to what they discover about one another. The sense of being watched, hedged in and discussed by a whole community informs all Austen’s novels.

We know that Austen wrote a first version of Pride and Prejudice in the 1790s, almost 20 years before it was eventually published. This early date is important and may have left deep traces on the novel, among them its use of letters. Pride and Prejudice is filled with letters: as many as 42 are mentioned, and there is considerable emphasis on reading and re-reading letters. Many 1790s novels were actually written completely in letter form (epistolary fiction), as an exchange of letters between characters. Novels in letters take on a particular structure, openly inviting interpretation as characters engage in reading one another’s behaviour (literally reading it off the surface of their letters). This openness to debate and interpretation, whatever its deeper structural origin, is written large across the pages of Pride and Prejudice. Elizabeth Bennet in particular must learn to be a skilful reader. The Heroine, a Gothic satire by Eaton Stannard Barrett (1813), is one of many epistolary novels published in the late 18th and early 19th centuries. 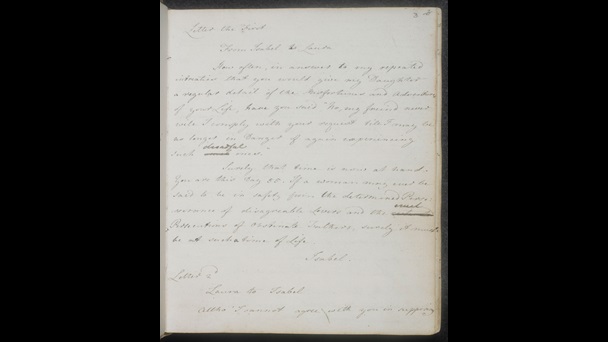 Page from the manuscript of ‘Love and Freindship’, an epistolary novel Jane Austen wrote in 1790, aged 14.

Chapters 34 to 36 show how this works: beginning with Elizabeth sitting alone, employing her evening reading ‘all the letters which Jane had written to her since her being in Kent ... Elizabeth noticed every sentence ... with an attention which it had hardly received on the first perusal’. Mr Darcy unexpectedly enters this quiet scene and proposes marriage. He is rejected and the next chapter (ch. 35) finds him interrupting Elizabeth’s morning walk and thrusting a letter into her hands. We read it, literally, over Elizabeth’s shoulder. It explains not only Mr Darcy’s behaviour in separating Bingley and Jane Bennet but, in supplementing what Elizabeth knows of Mr Wickham, requires her to reassess her opinion of him. The next chapter (ch. 36) opens with a description of how Elizabeth felt on reading the letter: ‘She read, with an eagerness which hardly left her power of comprehension’. Then we are told that she re-reads the letter ‘with the closest attention’. This second reading is reflective and more judicious. In re-reading she confronts her own errors and only now refashions her opinion. The lesson is clear: Elizabeth (and the novel reader) must learn to be good readers of behaviour and of words. Emma too contains similar lessons, especially around the letters sent by Frank Churchill and avidly and variously interpreted by the Highbury community (chs. 50 and 51).

Letter from Jane Austen to her sister Cassandra, 25 April 1811 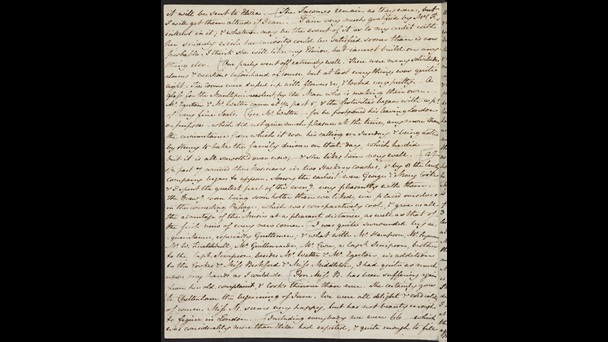 A letter from Jane Austen to her sister Cassandra, 25 April 1811. Austen describes a party she had attended the previous night, at which she reveled in the opportunity to scrutinise the guests, stating ‘Poor Miss B. has been suffering again from her complaint and looks thinner than ever…Miss M. seems very happy, but has not beauty enough to figure in London… Capt. S. was certainly in liquor’.

There are words that Jane Austen works hard across all her novels: adjectives ‘agreeable’, disagreeable’, ‘amiable’ are favourites with her; so too is the noun ‘opinion’. What they share are social and moral valuations. The reader is informed, early in their acquaintance, that ‘it was not in [Elizabeth Bennet’s] nature to question the veracity of a young man of such amiable appearance as Wickham’ (Pride and Prejudice, ch. 17); Mr Bingley, too, is described as ‘“truly amiable”’ (ch. 16), while Mr Darcy is judged on his first appearance at the Meryton assembly rooms to have a ‘disagreeable countenance’ (ch. 3). By the novel’s end, Elizabeth’s confession of her love for Mr Darcy includes the statement, ‘“he is perfectly amiable”’ (ch. 59). In Emma, Mr Knightley challenges Emma’s description of Frank Churchill as ‘“an amiable young man”’ by distinguishing between the French and English meanings of the term. In this patriotically English novel this is a sufficiently strong warning to the reader: ‘“No, Emma, your amiable young man can be amiable only in French, not in English. He may be very ‘aimable’, have very good manners, and be very agreeable; but he can have no English delicacy towards the feelings of other people: nothing really amiable about him.”’ (ch. 18). Mr Elliot, introduced as ‘particularly agreeable’ (ch. 15), is eventually condemned in Persuasion for being ‘too generally agreeable’ (ch. 17). The reiteration of these words is a special feature of Austen’s style, subtle shifts in her usage suggesting how in learning to discriminate between true and false worth (true and false ‘amiability’) her heroines gain social and self-understanding. 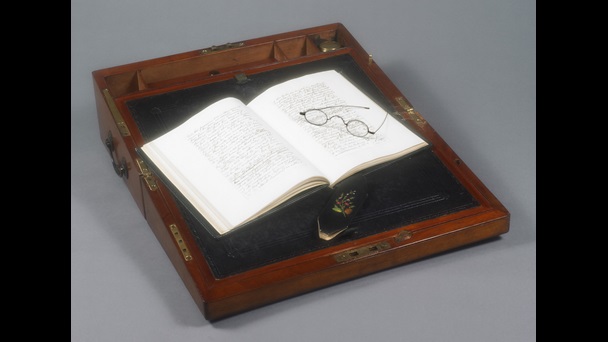 In 1794 Jane Austen’s father gave her this portable ‘writing-box’. It is likely that section of Sense and Sensibility, Pride and Prejudice and Northanger Abbey were written on this very desk.

Learning to live in society

A moral slipperiness attaches to Austen’s favourite words, which can mislead reader and characters alike. Take the use of ‘opinion’ in Pride and Prejudice. The novel is awash with ‘opinions’ whose robustness will be probed and dismantled in the course of the narrative. In particular, Austen exposes the tendency of ‘opinion’ to masquerade as informed judgement when it may be no more than ignorance or prejudice: ‘“My good opinion once lost is lost for ever”’ (Mr Darcy, ch. 11); ‘mingling with a very good opinion of himself’ (Mr Collins, ch. 15); ‘“I have never desired your good opinion ... my opinion of you was decided”’ (Elizabeth Bennet, ch. 34); ‘“It is particularly incumbent on those who never change their opinion, to be secure of judging properly at first”’ (Elizabeth Bennet, ch. 18).

Time and again in Austen’s novels, opinion substitutes for truth. Opinions are bandied about as if they are truths. Who speaks truth in Jane Austen’s novels? The convergence of narrative voice with character voice, one of Austen’s great legacies to the 19th-century European novel, is crucially an affirmation of opinion, or point of view, even of the gossip of village communities, over general truth. What this means is that just as her fictional worlds are constituted from multiple opinions, from people watching and commenting on one another’s behaviour, in the same way, Austen argues, novels can teach readers the essential skills of interpreting character and learning to live in society, by bearing others’ opinions in mind and knowing when to adjust our own. Jane Austen was keenly interested in what her friends, family and acquaintances thought of her work. She copied their opinions of two of her novels, Mansfield Park and Emma, on to these sheets.