Looking at broadsides, cheap pamphlets and the works of Charles Dickens, Judith Flanders explores how crime in the 19th century – particularly gruesome murder and executions – served as entertainment in both fiction and real life.

19th-century writers and their readers loved crime, and some of the greatest writers of the century focused on sensation: indeed, it is hard to think of a Dickens novel which has no crime element at all. In perhaps the most famous of all murder scenes, the burglar Bill Sikes, in Oliver Twist, murdered his mistress, Nancy. The novel was immediately reproduced onstage, as most plays were, and in addition, Dickens, who adapted and read from several of his works to wildly enthusiastic crowds, had one of his greatest successes with his ‘Sikes and Nancy’ reading.

In 1842, Punch magazine joked, ‘We are a trading community – a commercial people. Murder is, doubtless, a very shocking offence; nevertheless, as what is done is not to be undone, let us make our money out of it’.[1] This joke resonated because it was true. Murder was one of the great entertainments of the 19th century – not just fictional murder, but real murder. 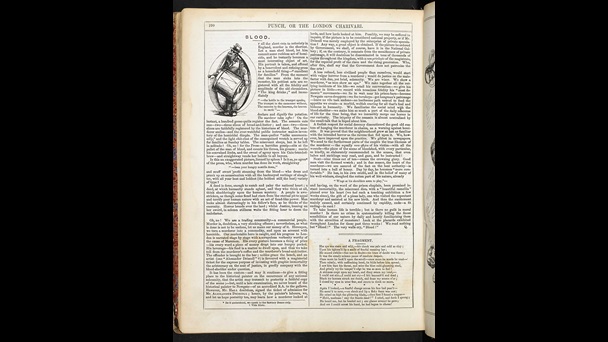 ‘Blood’, an article from Punch satirising the Victorian public’s appetite for murder, 1842.

'The Trial-for-Murder Mania' from Punch's Almanack 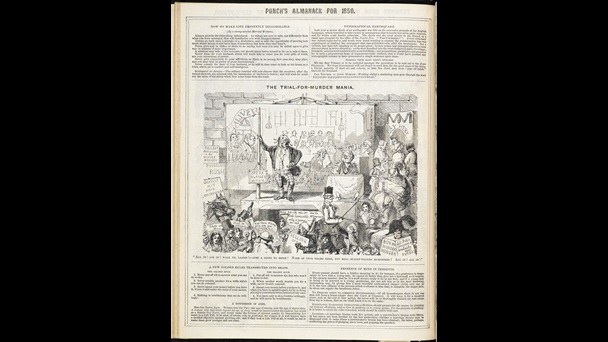 Cartoon from Punch's Almanack, ‘The Trial-for-Murder Mania’, satirising the public’s appetite for crime and execution as a form of entertainment, 1850.

In 1828, the country was electrified by the discovery of a body in a shallow grave in a barn in Polstead, Suffolk. It was that of Maria Marten, the local mole-catcher’s daughter. She had left Polstead to marry a farmer named William Corder, and was never seen again. By the time her body was found, Corder had married a woman he met through a newspaper advertisement, and was running a girls’ school. The details only got better: Maria had dressed as a man for her elopement, and her stepmother said she had had a miraculous dream which led the villagers to the grave.

The story was made for entertainment: there were plays written and performed even before the trial, and street peddlers sold broadsides and ballads on cheap printed sheets providing the public with all the gory details. For the more prosperous, Staffordshire pottery figures of Corder and Miss Marten, and even of the barn, were produced. A peepshow, a small box with viewing-holes, had the various locations painted and ‘pulled up and down by strings’. Marionettes were regular fairground entertainment, and the story of Maria Marten became a touring staple. There was even a novel, The Red Barn, ‘founded on fact’ which was in reality standard melodrama hokum.

Broadsides were printed sheets that provided members of the public with the topical information of the day, from shipwrecks and royal gossip to riots and murders. Murder broadsides typically included an account of the crime committed, a lurid woodcut illustration of the murder or execution, and often a simple song (sometimes moral, but often lewd, comical or admiring of the criminal) that purchasers could sing with friends or family at home or over a drink in a tavern. 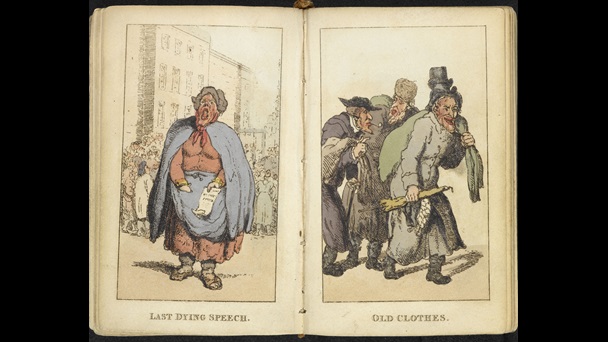 Although these broadsides were affordable to the masses and ordinarily sold well, sales for those depicting the murderer Greenacre were slower. Greenacre was a notorious murderer who in 1836 dismembered the body of his fiancée, leaving the torso in one part of London and her head in an East End canal. He was reputed to have taken the head by bus. A street seller interviewed by Henry Mayhew had this explanation for why the Greenacre broadsides didn’t sell well: 'Greenacre didn't sell so well as might have been expected for such a diabolical out-and-out crime as he committed; but you see he came close after Pegsworth [who murdered a draper for a £1 debt], and that took the beauty off him. Two murderers together is no good to nobody'. Presumably the punters had already spent their pennies and were unwilling to part with more money for a second murder.

While two separate murders in close succession may be bad for business, two murderers acting together is a different story. In 1849 Maria and Frederick Manning became one of the greatest crime sensations of the century. Maria Manning was a Swiss lady’s maid married to an unemployed railway-worker. She was also ‘friendly’ with Patrick O’Connor, a customs official who was said to have sideline as a loanshark, until one night he vanished after dinner at their house.

He was soon found – dead, and under the kitchen floor. At their trial, Mrs Manning made an un-English spectacle of herself, much enjoyed by the broadsides, shouting, ‘Shameful!’ and ‘Base England!’

Executions were rare (out of 14,686 guilty verdicts in one district over 25 years, only four people were executed); executions of women were even rarer; and double executions of husband and wife were unimaginably rare. This created a commercial bonanza, with up to 2.5 million broadsides sold. Pamphlets also made fortunes: one journalist

had been a man all tattered and torn, but so soon as the remains of poor Patrick O’Connor had been identified … the lucky reporter blossomed into a brand-new coat ... New plaid pantaloons followed, a glossy silk hat shone upon his head, Wellington boots adorned his lower extremities, and the bows of a satin necktie floated on his chest. The only thing he lacked was a waistcoat; but alas! The Mannings were hanged ere [he] had secured that much-coveted vest ...[2]

A broadside-seller advertised his sheets with an illustration of Mrs Manning looking glamorous and firing a pistol at O’Connor, who was washing his hands before the meal: ‘The people said ...“O, look at him a-washing hisself; he’s a doing it so nattral, and ain’t a-thinking he’s a-going to be murdered”’.[3]But the broadsides themselves used generic images: one picture of O’Connor was really William IV; another had a standard anonymous execution scene, with a single body hanging from a gallows, with, next to it, obviously scratched onto the block later, a black blob indicating the second body.

Broadside on the execution of the Mannings 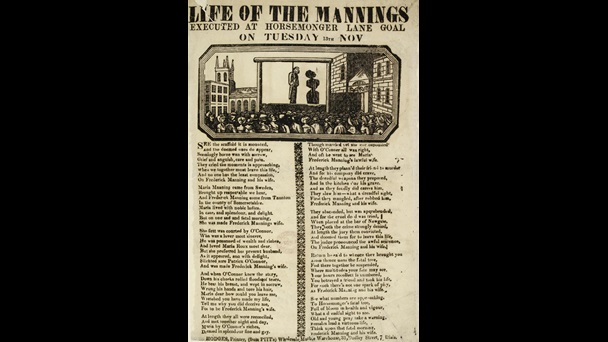 A broadside depicting the execution of the Mannings. These cheaply produced prints were clearly repurposed: here a single body hangs from a gallows and, next to it, obviously scratched on to the block later, a black blob indicating the second body.

Even in an age when hangings drew thousands of spectators, the interest in the Mannings was exceptional. Householders near the gaol sold seats at their windows, and on their roofs, for up to two guineas each. The American novelist Herman Melville recorded in his diary that he and a companion had ‘Paid half a crown each for a stand on the roof of a house adjoining ... All in all, a most wonderful, horrible, & unspeakable scene.’

'Mr Charles Dickens and the execution of the Mannings', reprinted from The Times 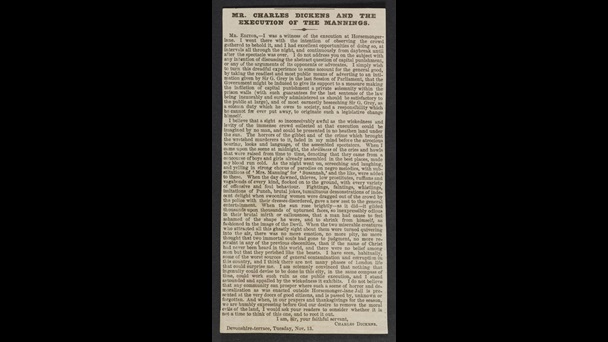 Letter from Charles Dickens to The Times expressing shock and disgust at the enthusiasm of the crowd that gathered to witness the execution of the Mannings, 1849.

Dickens’s friend John Forster wrote that when she came out to be hanged, Mrs Manning was ‘beautifully dressed, every part of her noble figure finely and fully expressed by close fitting black satin’. And more than half a century later, Thomas Hardy, recollecting the execution of Elizabeth Brown, a labourer’s wife, which had been a trigger for the final scene of Tess of the d’Urbervilles, wrote, ‘I remember what a fine figure she showed … & how the tight black silk gown set off her shape as she wheeled half-round and back.’ Yet Mrs Brown was impoverished, and unlikely to own a silk gown. Hardy was just nine when the Mannings died, but it sounds as if he had read about them in a broadside or pamphlet.

For the hundreds of thousands who would not have dreamt of going to an execution, there was still plenty of Manning entertainment. In Manchester, adverts appeared for waxwork figures of the couple to ‘amuse, delight and highly instruct’, while Madame Tussaud’s promised reproductions of the Mannings ‘taken from life at their trials, a cast in plaster of Mr. O’Connor, with a plan of the kitchen where he was murdered …’[4] (Mrs Manning’s figure remained on display for a record 122 years). As with Maria Marten, Staffordshire figures of the couple appeared, and a racing greyhound was named Maria Manning too .

And finally, Dickens’ Bleak House immortalized Mrs Manning as Hortense, a lady’s maid and murderer with all of Mrs Manning’s characteristics: perhaps the ultimate fame.