Ragged Schools provided free education for children too poor to receive it elsewhere. Imogen Lee explains the origins and aims of the movement that established such schools, focusing on the London’s Field Lane Ragged School, which Charles Dickens visited.

A dirtier or more wretched place he had never seen. The street was very narrow and muddy; and the air was impregnated with filthy odours. There were a good many small shops; but the only stock in trade appeared to be heaps of children, who, even at that time of night, were crawling in and out at the doors, or screaming from the inside (Oliver Twist, ch. 8).

Charles Dickens’s description of a night walk through Islington and Holborn in Oliver Twist (1838) depicts a metropolis that stumbled with stunted life. By 1841 almost 2 million people lived in London, but without compulsory schooling only a fraction of this population had received any formal education, contributing to an illiterate workforce and a rising prison population. As Britain sought to expand as its Empire and the domestic population grew, the image of London as an Imperial Capital, made up of poor, unschooled and (due to the 1832 Reform Act), recently enfranchised individuals, was a visceral muse to the anxieties of Victorian writers and their readers. Without more schools, ‘the capital city of the world,’ feared Dickens, would become, ‘a vast hopeless nursery of ignorance, misery and vice; a breeding place for the hulks and jails’.[1]

Letter from Charles Dickens on ragged schools, from the Daily News 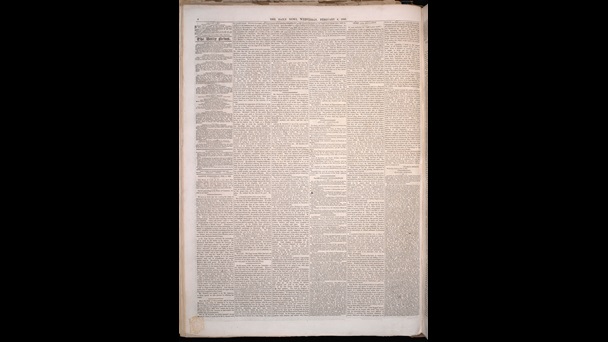 Dickens’s fears for the uneducated masses permeated his work, but so too did his hope for charity and his faith in schooling. In 1846, eight years after he imagined piles of children punctuating London’s landscape, Dickens recalled a visit to Field Lane Ragged School, which opened in 1842 near to the very location in which he set Fagin’s fictional den of thieves. The school consisted of, ‘two or three … miserable rooms, upstairs in a miserable house,’ where children ‘huddled together on a bench,’ while, ‘some flaring candles [were] stuck against the walls.’ Not to be ‘trusted with books’ the children were taught ‘orally’ by a voluntary teacher, ‘to look forward in a hymn … to another life, which would correct the miseries and woes of this’. 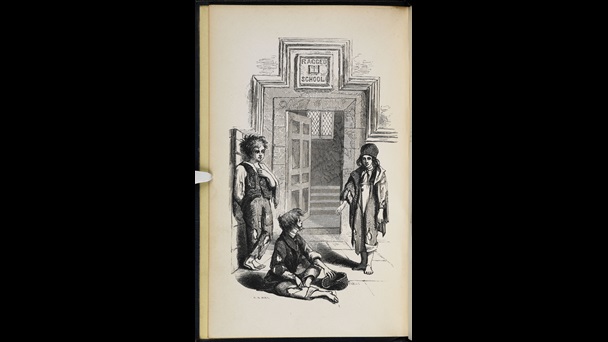 Field Lane’s humble setting belied its grander aims. The school was part of a new and growing educational movement, which was ‘willing to teach’ children for free, who were, ‘too ragged, wretched, filthy, and forlorn, to enter any other place’. Prior to 1870, under Britain’s laissez-faire, fee-paying education system schools usually hand picked their students according to academic ability, wealth, or religion. By contrast Ragged Schools could be attended by anyone and showed ‘some sympathy’ especially to children and adults, ‘who could gain admission into no charity school, and who would be driven from any church door’.[2]

By the 1850s Field Lane consisted of a day school, which taught reading, writing, counting and the Bible; two night schools, one for ‘vagrant and destitute adults,’ another for boys who were employed during the day; as well as classes in shoemaking and tailoring for boys, and sewing classes for girls. Alongside its academic and vocational lessons, Field Lane fed and clothed its students, while also running a night refuge, lessons on parenting for mothers and a Bible school at weekends. Indeed, while the school accepted a child of any faith or background, evangelical Christianity was at the heart of Ragged schooling, with the aim being to,

Teach poor mothers how to clothe and bring up their offspring, to teach fathers their duties to their families and children their duty to their parents, to teach above all things that true wisdom is true religion and true religion supreme love to God.[3]

Newspaper report on a visit to the Field Lane ragged school 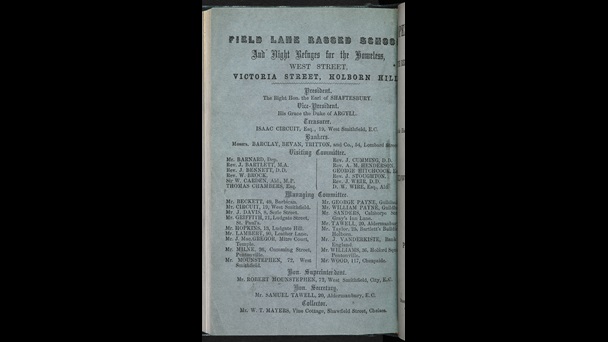 Outline of the management of Field Lane Ragged School, 1859.

Field Lane was opened by the London City Mission (LCM), which had been founded in 1835 by Scottish missionary-worker David Nasmith. Nasmith asked his fellow missionaries to bring ‘an acquaintance with salvation, through our Lord Jesus Christ’ by providing free education and ‘doing … good by every means in your power’ for London’s growing population of the ‘destitute poor’.[4] The work of the LCM received significant financial and political support from the reforming conservative, Lord Ashley the 7th Earl of Shaftsbury, and in 1844 he helped to establish and chair the Ragged School Union. The Union was founded with the aim of turning a movement of individual schools, like LCM’s Field Lane, into a system of free education for poor children that could be sustained by charity or even government grants.

Dickens visited Field Lane just before the Ragged School Union was formed and just after the publication of the reports from the Children’s Employment Commission, which the Earl of Shaftsbury had also instigated in 1840. These parliamentary reports detailed the horror of child labour in Britain. The first was published in 1842 and described the low pay, long hours and dangerous work conditions experienced by children working in mines and collieries. The second report was published the following year and provided interviews with hundreds of children who worked in various trades and manufactures. The reports captured Dickens’s imagination, giving urgency to his interest in child poverty, and this urgency was compounded by the children he encountered in Field Lane. The students of the Ragged school, who ranged, ‘from mere infants to young men; sellers of fruit, herbs, lucifer-matches, flints; sleepers under the dry arches of bridges; young thieves and beggars’,  gave faces to the interviews that filled the Commission’s reports.[5] The hardship faced by these children, and the religious and economic illiteracy the Ragged Schools attempted to stem, would in turn inspire the child-like figures of Want and Ignorance that clung to the Ghost of Christmas Future in Dickens’s 1843 novella A Christmas Carol.[6]

Ragged Schools by no means received unconditional public support. Dickens himself had, ‘no desire to praise the system’, believing it was not ‘sufficiently secular…presenting too many religious mysteries and difficulties to minds not sufficiently prepared for their reception’. In 1850, the journalist Henry Mayhew highlighted the ineffectual nature of the schools by arguing that juvenile delinquency rates were rising.[7] In his 1851 investigative work, London Labour and the London Poor, Mayhew described the lives of a group of Mudlarks who traipsed up and down the banks of the Thames looking for coal, copper, rope and any other scrap they might be able to sell. These were the children for whom Ragged Schools had been established, but instead,

These poor creatures … may be seen of all ages, from mere childhood to positive decrepitude, crawling among the barges at the various wharfs … with but few exceptions, these people are dull, and apparently stupid; this is observable particularly among the boys and girls, who, when engaged in searching the mud, hold but little converse one with another.[8]

Few of these children had been to church or school, and for those who had it was more, ‘because other boys go there, than from any desire to learn’.[9] As one boy commented, he did not think he could learn even if he tried 'ever so much’.[10] Indeed, due to their acts of ‘petty theft’ brought about by hunger, the most common institution these children had encountered was the House of Correction.[11] For Mayhew, Mudlarks were both young and old, not just in age but in experience. Poverty had stunted their development, while institutions, like schools and prisons, had left them weary of their own achievements.

Concerned that their schools did not induce a ‘desire to learn’, and that families saw the classes on offer as irrelevant, the Ragged School Union began to establish ‘brigades’ for their male pupils in 1857. These extra-curricular groups provided certified jobs in street vending or shoe shining, with a proportion of the boys’ earnings being placed in a personal bank account.[12] Yet, as the historian Lionel Rose has shown, many children already worked in such industries outside of Ragged Schools. As a result, boys from the brigades were vulnerable to ridicule outside the classroom from children who chose not to join.[13] Despite hostility from the streets, however, the brigades were approved by the Home Office and the Metropolitan Police, who saw them as encouraging discipline and work-skills among children who might otherwise enter a life of crime.[14]

Until the end of the 19th century, schooling remained a mainly voluntary affair, but under the 1857 Industrial Schools Act any Ragged School prepared to be inspected by the Home Office and provide boarding for children in exchange for Government grants, had the power to compel children to attend lessons.[15] The Act, and its subsequent 1860 amendment, enabled magistrates to send children as young as seven or as old as 14, who had been found in the company of criminals or were vagrant and begging to attend residential schooling for up to two years. While parents or guardians were expected to fit the bill for this boarding, Ragged Industrial Schools continued to rely almost solely on charity and Government handouts because many parents were incarcerated or simply too poor to pay.[16]

The popularity of Ragged Schools among the poorest in society remained dubious throughout the second half of the 19th century. In the Ragged School Union’s Annual Report for 1857, for example, out of London’s estimated half a million children, just over 21,500 had attended their lessons or used their services. Indeed at Field Lane, of the 563 children registered for the day school, only 275 were actively attending. The Ragged School Union concluded that they were, ‘far from thinking that they have reached the limits of their work or even accomplished half that which is necessary for the Metropolis alone’.[17] The quality of the education given was equally questionable. By 1861 an investigator for the Royal Commission on Education declared that,

There may, perhaps, be one or two cases in which under unpromising circumstances, a boy or girl has derived benefit from a ragged school, though I admit that I have been unable to discover any.[18]

It would take a further nine years before Parliament agreed that Ragged schooling alone would not solve the problems of Ignorance and Want. The introduction of universal, compulsory schooling in London under the 1870 Education Act finally ensured that every child had a right to a secular school place and with it, as Dickens had desired 30 years earlier, ‘to correct the miseries and woes’ of poverty.[19]