Robert Burns: a career in verse

Dr Robert Irvine considers the career of Robert Burns as a writer driven more by the excitement of writing and collecting verse than the desire for outward success, despite achieving long-term fame as Scotland’s ‘national bard’.

Robert Burns (1759–1796) is at least partly to blame for one of the misconceptions that continue to distort our understanding of this astonishingly versatile poet. He was made famous by one of the most innovative volumes of verse published in Britain in the 18th century: Poems, Chiefly in the Scottish Dialect, first published in Kilmarnock, Ayrshire, in 1786. In one of its verse epistles, addressed to another Ayrshire poet, Burns contrasts himself with the classically-educated writer:

Gie me ae spark o’ Nature’s fire,
That’s a’ the learning I desire;
Then tho’ I drudge thro’ dub an’ mire
At pleugh or cart,
My Muse, tho’ hamely in attire,
May touch the heart.

In lines like these Burns fostered the image of a ‘heaven-taught ploughman’ eagerly reproduced by a literary culture which valued poetry of ‘nature’ and ‘the heart’. In fact, for the son of a struggling Scottish tenant farmer, Burns had a great deal of secular ‘learning’, including a thorough grounding in English literature, from a private tutor, which included readings in Shakespeare, Milton, Thomson and The Spectator. Although by his mid-teens Burns was indeed engaged in hard physical labour on the farm, he continued to read keenly and widely: the image of ‘ae spark o’ Nature’s fire’ can itself be traced to Sterne’s Tristram Shandy (1761) and Pope’s ‘Essay on Criticism’ (1711). Crucially, he added to his knowledge of Allan Ramsay, Scotland’s most celebrated poet of the first half of the century, close attention to the poems of Robert Fergusson (1750–74), a near-contemporary who had written in both Scots and English, and used Ramsay’s favourite verse forms (such as the ‘Standard Habbie’ stanza quoted above) to address contemporary Scottish life. Fergusson provided the emboldening precedent for the Kilmarnock Poems, and an expanded version was published the following year in Edinburgh, where Burns was lionised as Scotland’s ‘national Bard’.

'To a Louse' and 'To a Mouse' by Robert Burns 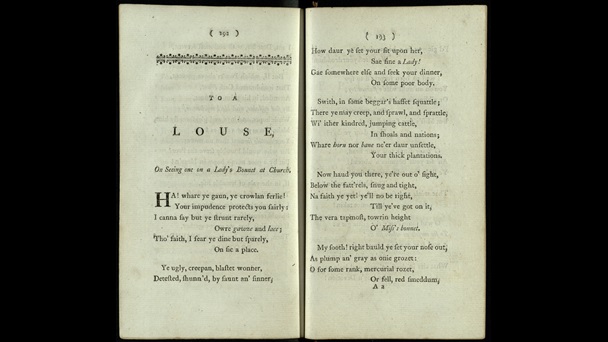 Robert Burns’s Songs chiefly in the Scots dialect (1786), often known as the ‘Kilmarnock edition’, contains many of his most famous poems, such as ‘To a louse’. The book was quickly recognised as the work of an important talent.

Crucial in this spectacular success were the social networks of enlightenment Scotland which linked rural counties like Ayrshire to Edinburgh and beyond. A plethora of clubs, societies and Masonic lodges were a feature of the country, all to some degree committed to the improvement of the self and of society. Burns was an enthusiastic participant: anti-clerical satires like ‘Holy Willie’s Prayer’ circulated in manuscript through these networks, themselves an alternative source of social authority to the Kirk; and verse epistles like those addressed to John Lapraik dramatise within Burns’s work their empowering sociability. At the same time, many of the Kilmarnock Poems are eloquently angry at the indifference of the wealthy, a class Burns knew would include most of his readers, towards the suffering of the rural poor. The volume begins with ‘The Twa Dogs’, an eclogue in tetrameter couplets, in which a ploughman’s collie and a landowner’s Newfoundland exchange perspectives on the human world. The collie reports on the virtues and resilience of the poor; the Newfoundland notes how they are ‘negleket, / How huff’d, an’ cuff’d, an’ disrespeket!’ by the idle and corrupt rich. This poem is Burns’s opening negotiation with his readers, the dogs’ friendship representing a cross-class fraternity that he implicitly demands from anyone who wishes to read further in his book. Its most famous poem, ‘To a Mouse’, compares the destruction of a mouse’s nest by the plough with the chronic economic insecurity of the ploughman. Perhaps its most ambitious, ‘The Cotter’s Saturday Night’, written in Spenserian stanzas, connects the domestic virtue of the cottage with national survival in the manner of Goldsmith’s The Deserted Village (1770).

'To a Louse' and 'To a Mouse' by Robert Burns 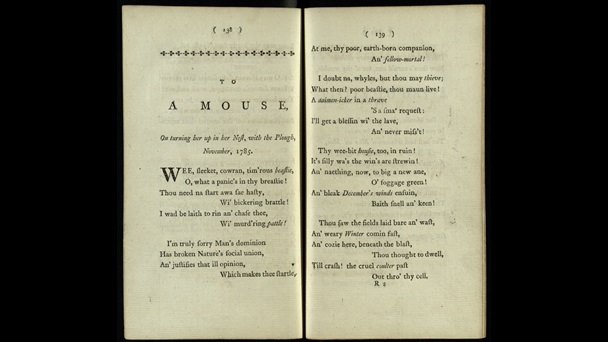 ‘To a mouse’, one of Robert Burns’s most well-known songs, was published in the famous ‘Kilmarnock edition’, Songs chiefly in the Scots dialect (1786).

Burns’s Masonic contacts gained him a patron, the Earl of Glencairn, who facilitated the publication of the Edinburgh edition of the poems; his national fame as a poet gained him another, Robert Graham of Fintry, who helped Burns to a job in the Excise service in Dumfriesshire in 1788. This provided the economic security desperately needed by a poet already the father of a son (with Jean Armour, whom he married) and a daughter (with Elizabeth Paton, their child being raised by Burns’s mother). And at this point Burns seems to have lost all interest in making money from his writing. He continued to write poems, some of which circulated in manuscript among his friends, some published in newspapers, often anonymously, and some added to later editions of the Poems: the brilliant verse-narrative of comic supernatural encounter, Tam o’ Shanter (1791), appeared in both the latter contexts without Burns receiving money for either of them. His most consistent creative focus after the move to Dumfriesshire was in a quite different area, however.

In Edinburgh Burns had met Joseph Johnson, an engraver and music seller, who had begun a series of volumes of Scottish songs, with 100 songs per volume, called The Scots Musical Museum. Burns, himself an enthusiast for popular song, immediately offered his services: there was still time for Johnson to include a few of Burns’s own songs in volume I (1787). Almost half the next three volumes (1788, 1790, and 1792) are songs recognised to be by Burns; volume V, containing another 46, was ready to go to press when Burns died in 1796; and that still left material for a quarter of the songs in the final volume, which Johnson managed to put out in 1803. From 1792 Burns was also contributing songs to another multi-volume work, A Select Collection of Scottish Airs, for the Voice, put together by an established publisher, George Thomson. But with Thomson, Burns had to argue and compromise as he never did with Johnson. Burns sent Johnson so many of the Museum’s other songs, and had so much influence in the choice of the rest, that Burns must be considered the co-editor of the entire project as well as a contributing author. The Scots Musical Museum should be thought of as Burns’s other book, alongside, and as important as, the Poems. It offered him a different kind of role in his nation’s literature: not the public role of ‘national Bard’ that he had constructed for himself in the Poems, but one more profoundly collaborative and, in his lifetime, anonymous. 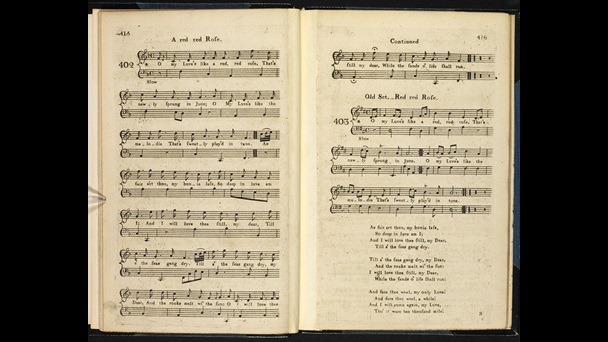 ‘A red, red rose’ was published in 1797 in James Johnson’s Scots Musical Museum (1787-1803), in which Burns was a collaborator and editor, having previously appeared in Pietro Urbani’s Scots Songs (1794).

This retreat from the public eye was perhaps fortuitous. Like many progressive writers in the period Burns was vulnerable when in 1792 the British government began a campaign of repression against ‘seditious’ writings, and those who disseminated them. Burns’s job was threatened at the end of that year because of his well-known radical sympathies. But this scare did not prevent him anonymously publishing songs in newspapers and magazines that expressed those sympathies. ‘Bruce’s address to his troops’, also known as ‘Scots, wha hae’, is ostensibly about the winning of Scottish independence at the Battle of Bannockburn in 1314, and has long been a candidate for Scottish national anthem. But its publication in the London Morning Chronicle in 1794, and its opposition of ‘Liberty’ to ‘Tyrants’, make clear its sympathy for the French Republic’s struggle for survival against its enemies, which included the United Kingdom. In a song from 1795, the sociability of the clubs and lodges of enlightenment Scotland becomes the model for a global fraternity of the people, united against inherited power:

Robert Burns died in Dumfries on 21 July 1796. He remains celebrated at home and across the world as Scotland’s national poet. Yet the variety and sophistication of his work will still astonish anyone who returns to it with fresh eyes. 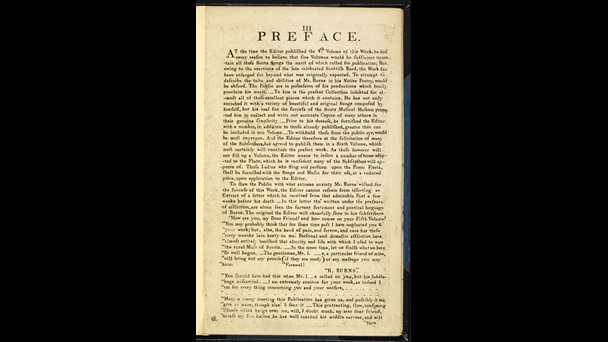 James Johnson worked with Robert Burns to produce the Scots Musical Museum (1787-1803), six volumes of traditional and new songs, a third of which were collected or written by Burns.