Professor John Stokes considers Salomé as a play within both the French Symbolist and the decadent traditions, exploring its influences, reception and Aubrey Beardsley's illustrations of the work.

Salomé is a rare instance in British theatrical history of an authentically ‘Symbolist’ drama. This means that it belongs with an innovative group of plays produced in Europe in the late 19th and early 20th centuries. Conceived as an alternative to naturalism and the kind of plays that purported to represent life by reproducing everyday habits of speech and physical behaviour in recognisable environments, ‘Symbolist’ drama made use of poetic language and pictorial settings to invoke the inner lives of characters. Released from the constraints of the here-and-now it was free to express all manner of emotions both spiritual and sensual. 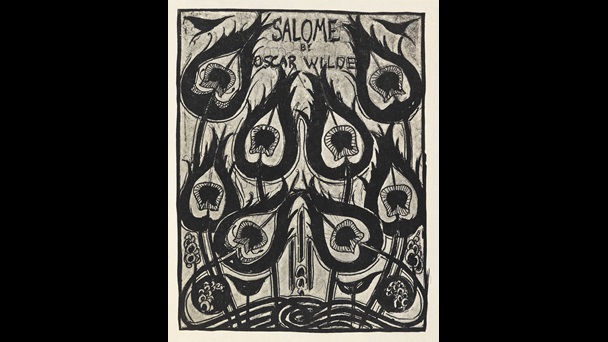 Oscar Wilde (1854–1900) became familiar with these ideas in the course of his stays in Paris, in particular through his exposure to the works of the Flemish playwright Maurice Maeterlinck (1862–1949), who had created a stir with plays notable for their dreamlike qualities and relative lack of action. The precise history of Salomé’s composition is complicated, though Joseph Donohue has evaluated the evidence in his monumental ‘variorum’ edition for Oxford English Texts.[1] In the end questions such as whether Wilde first drafted the play in French or English, or how much advice he took from various French friends, are less important than the fact that in any formal sense the play stands alone among his major works. 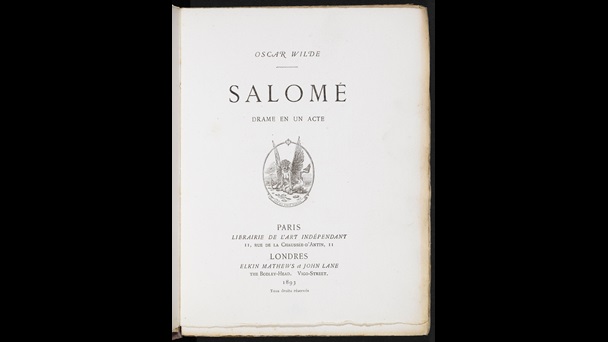 The first and original French-language edition of Oscar Wilde’s play Salomé: A Drama in One Act, 1893.

As an experienced scholar, Wilde knew his way around the Classical and Biblical texts. The story of the young woman who danced before Herod demanding the head of John the Baptist as her reward is told in Mark 6:14–29 and in Matthew 14:1–12. Wilde could also have drawn upon the version recounted by Flavius Josephus, the first century CE Roman historian. Yet none of these ancient accounts contains all the elements that Wilde was to embody in his play. Noticeably absent from them, for instance, are the minor but significantly choric figures of the Young Syrian and the Page of Herodias. 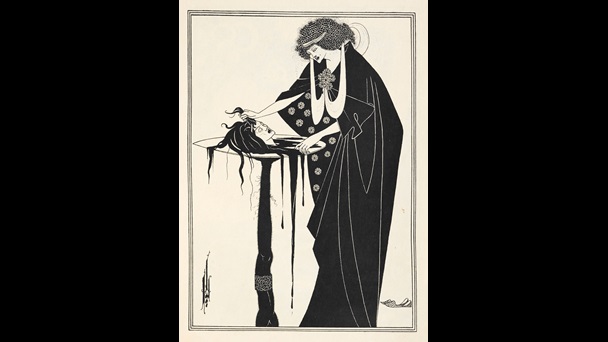 'The Dancer's Reward': illustration by Aubrey Beardsley of Salomé with her reward for dancing the dance of seven veils - the severed head of Jokanaan (John the Baptist), estimated 1906.

Among Wilde’s near contemporaries a number of writers had already been drawn to the seductive dancer. Prominent among precursors writing in French were the poet and theoretician Stéphane Mallarmé, and the novelists Gustave Flaubert and Joris-Karl Huysmans. Mallarmé’s dramatic but highly abstract poem Hérodiade was begun in the early 1860s with a fragment published in 1871, but the whole didn’t appear until long after the completion of Wilde’s play. Nevertheless, as Wilde knew Mallarmé personally, it is not inconceivable that he saw drafts. In Flaubert’s conte entitled Hérodias (1877) the emphasis is on the political machinations of Salome’s mother. Wilde seems have taken the name of the prophet, Iokanaan, from Flaubert but little else. Huysman’s novel À rebours, published in 1884, is about a Parisian aesthete who becomes a self-indulgent recluse rather like Wilde’s own invention, Dorian Gray. Of relevance to Wilde’s play are extended passages evoking two contrasting paintings of Salomé by the Symbolist painter Gustave Moreau in which a bejeweled figure advances upon the shadowy figure of the Tetrarch. Among other sources and inspirations it is clear that in the creation of the incantatory and densely metaphoric verse patterns Wilde mimicked The Song of Songs and the Psalms as they had appeared in a 17th-century French translation.

Place the Salomé story in a dramatic structure full of initial forebodings, involved observers, and a series of central conflicts each with a carefully placed climax, and you have a work with disturbingly ‘tragic’ pretensions. At the heart of the drama are a series of power struggles: between Iokanaan and Salomé obviously, but also between Hérodias and her husband, finally between Herod and Salomé. Much depends on the way in which the characters look at one another and are looked upon in return. In this moonlit setting, both magical and sinister, the gaze becomes a fateful indication of inner yearning and possessiveness.

Although rehearsals with Sarah Bernhardt in the title role were already underway in London in 1893, the play soon fell foul of the English censor, the Lord Chamberlain, who promptly forbade its performance. It was the job of the office of this senior member of the Royal Household to approve plays before their staging and it paid particular attention to the employment of biblical characters. It may be that from the censor’s point of view the fundamental blasphemy of the play lay in its exploitation of the eroticism already present within certain sacred texts, predominantly The Song of Songs. As matters turned out, the first performance of Salomé was to be in Paris in February 1896 at the Théâtre de L‘Œuvre, an experimental company that specialized in ‘Symbolist’ works. By then Wilde was confined in Reading Gaol. 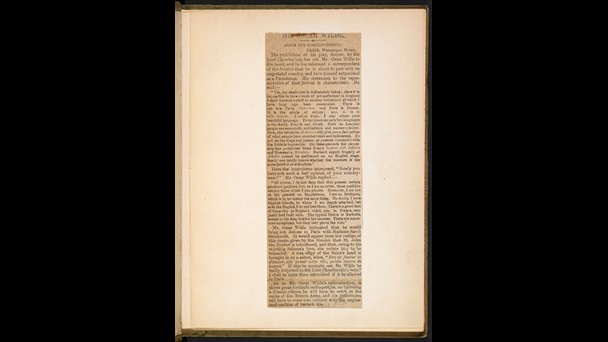 Newspaper cutting, inserted in the first English translation of Salomé, about Oscar Wilde’s reaction to the play being censored by the Lord Chamberlain.

Wilde was to maintain that he had not written his play with Bernhardt specifically in mind but it’s easy to see how her acting style could have inspired him. Bernhardt was famously serpentine in her bodily movements, both passionate and lyrical in her delivery. Moreover, she was also associated with plays that had a biblical or Eastern atmosphere. Nevertheless, one particular stage direction remains a puzzle: ‘Salomé dances the dance of the seven veils’. Critics have argued about Wilde’s intention here. Could he really have expected Bernhardt (then almost 50) slowly to divest herself of her garments or would the moment have been delicately hinted at? Subsequent directors have faced the problem in many ways – from unashamedly striptease to miming gestures that imply nakedness without actually requiring it.

Yet Salomé is not simply a nubile young woman attracted to a powerful and forbidden member of the opposite sex, she is determinedly vocal and capable of extreme acts of revenge should her will be flouted. In the end, desire and destruction come together. Although she remains a particularly memorable example of the type, Salomé has many forerunners among femmes fatales, those demonic females who lead men on, only to drain away their strength. In the 19th century fatal women proliferated in plays, poems and paintings, a misogynistic tendency that can also be seen as a fearful tribute to the increasing visibility of female independence.

Although the critic Regenia Gagnier has seen the play’s bringing together of the sexual and the social as anticipating the ‘theatre of cruelty’ much favoured by a 20th century avant-garde[2], the play is infrequently staged even today. A successful realisation requires that acting and direction match Wilde’s text in extravagance. This has led, for instance, to the presence of a live python on stage and to strange, highly stylised choreographic movements – not dissimilar from the puppet-like gestures that fascinated Wilde and the Symbolist writers in general. The play has, though, flourished as a libretto that the opera composer Richard Strauss was able to translate into splendid music.

Salomé has more than one history: in addition to the checkered evidence of performance there is the record of its publication in French (1893) and in English (1894) This is complex not only because of the uncertainty surrounding Lord Alfred Douglas’s translation, which Wilde certainly didn’t admire and which poses questions of authorial authority, but also because the play has attracted some impressive illustrators. As the book historian Nicholas Frankel has observed, ‘the contradictions between the different Salomés that descend to us are themselves an index of the play’s alienation from the stable complacencies of English culture’.[3] First and foremost, there was Aubrey Beardsley. Not surprisingly Wilde seems to have been ambivalent about Beardsley’s stunning designs, which not only foregrounded the erotic almost to the point of obscenity, but also incorporated visual references to Wilde himself, seeming to attribute dubious voyeuristic motivations to the play’s creator. 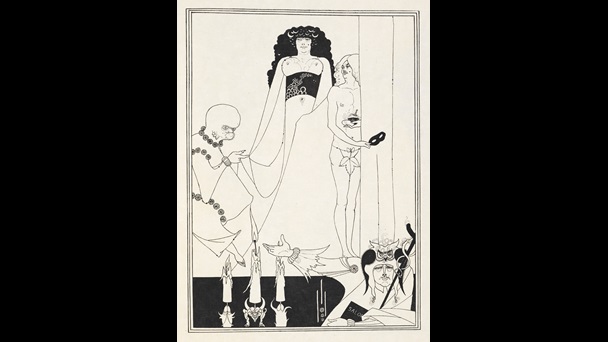 As Wilde must have been aware, even before Beardsley’s illustrations, Salomé would inevitably attract the label ‘decadent’. He may have even welcomed the appellation because, like the critic Arthur Symons, he was able to view decadence not simply as a pleasurable, if risky, way of life, but as a necessary precondition for a cultural renaissance. In this respect, ‘decadence’ was a natural follow-on from the more obviously high-minded ‘Aestheticism’ that Wilde had advocated publicly in the early 1880s. This was a dangerously subversive lineage and the ending of Salomé suggests institutional paranoia in the face of its radical demands when Herod, the royal hypocrite, is panicked into a repressive command to ‘kill that woman’ as if he were terrified that her rebellious spirit might otherwise run wild and free.