Dr Matthew Taunton takes us through 19th-century suburbia, showing how aspirations to respectability led the Victorian lower-middle class away from political involvement. The homogeneity and apathy of the suburbs provided rich satire for writers, as well as a setting for dystopian and science fiction.

Rapid population growth in British cities during the 19th century caused extreme overcrowding and the consequent formation of inner-city slums. But the cities were also expanding outwards. The development of a system of omnibuses and the railways enabled commuters from the middle and lower-middle classes to live miles from their places of work and encouraged new housing developments at a distance from the city centre. Culturally, this enabled what Raymond Williams called 'the suburban separation of ‘work’ and ‘life’ which has been the most common response of all to the difficulties of industrialism'.[1] For Williams, the suburban home created a cosy refuge from the hectic, cut-throat economic activity of the city, not reacting against industrial capitalism but creating a spatially separate zone of familial love and comfort that was exempt from capitalism’s influence.

Suburbs ranged from the genteel (Kensington) to the less so (Tottenham), but in both cases they were advertised to potential inhabitants in terms of a 'rus in urbe' (countryside in the city) idealism. This was often reflected in the architectural styles of the houses. John Ruskin complained of suburban semi-detached houses 'fastened in a Siamese-twin manner together by their sides and each couple has a Greek or Gothic portico shared between them, with magnificent steps, and highly-ornamented capitals'.[2] Often cheaply constructed and diminutive in size, suburban houses nevertheless gestured towards either the grandeur of the country manor or the quaint homeliness of the cottage – and sometimes an odd mixture of the two. Suburban idealism, and the often contrasting realities of suburban life, contributed to a fascinating new subject and setting for fiction. As the century wore on, the idyll seemed less likely to be realised and suburbia came to be both satirised and reflected in depictions of sinister dystopias.

While the very poor were still often confined to the inner cities, from around 1870 a new group with aspirations to homeownership and other markers of social betterment began to establish itself in the suburbs. In The Condition of England (1909), C F G  Masterman saw the suburban lower-middle class as a unique invention of the late-19th century. He described an emergent class of petty bank clerks, engaged in tedious labour in the city, and struggling to maintain a household that often included a domestic servant, as one of several empty symbols of prosperity. The suburbans were, Masterman thought, deeply conventional and inherently conservative in their aesthetic tastes and social attitudes. They had withdrawn from the class conflict that had hitherto been a typical feature of industrial civilisation, discharging their meaningless duties in the office by day, and spending evenings and weekends in retreat in the inward-looking environment of the suburban dormitory. He wrote: ‘They are easily forgotten: for they do not strive or cry; and for the most part only ask to be left alone. They have none of those channels of communication in their possession by which the rich and the poor are able to express their hostility to any political or social change. … No one fears the Middle Classes, the suburbans and perhaps for that reason, no one respects them, … they lack organisation, energy, and ideas. They form a homogeneous civilisation – detached, self-centred, unostentatious … It is a life of Security; a life of Sedentary occupation; a life of Respectability’.[3]

The suburbans provided a set of new characters for novelists and writers of short fiction. The most enduring of these, Charles Pooter, the fictional diarist in George and Weedon Grossmith's comic novel The Diary of a Nobody, became so established in the minds of the reading public that 'Pooterism' gained currency as a descriptive term. Pooter is the target of the Grossmiths' satire—a quixotic and pretentious member of the lower-middle class with ideas above his station—but the novel, which was first serialised in Punch in 1888, is also an affectionate portrait of family life.

Pooter lives with his wife Carrie, wayward son Lupin, and domestic servant Sarah at ‘The Laurels’, Brickfield Terrace, Upper Holloway, the combination of house and road names immediately suggesting that there is a problem with the suburb's faux-rural aspirations. Pooter attempts a series of aspirational home improvements yet they frequently backfire. In one memorable episode, he paints a variety of household objects in red enamel: flower-pots, towel rails, a chest of drawers and, finally, the bath! His comment is both funny and revealing: ‘To my mind it was an extraordinary improvement, but as an example of the ignorance of the lower classes in the matter of taste, our servant, Sarah, on seeing them, evinced no sign of pleasure, but merely said “she thought they looked very well as they was before.”[4] Pooter's mixture of ignorance, snobbery, pretentiousness and shallow materialism became the classic suburban mores.

Yet some readers have found much to admire in Pooter and, by extension, the suburbans in general. He is a devoted (if rather weak-willed) husband who takes genuine pleasure in the comforts and consolations of his family home. ‘After my work in the City, I like to be at home’, Pooter writes in his diary. ‘“Home, Sweet Home”, that's my motto’.[5] Pooter lives his life through clichés like this one, yet it is difficult to doubt the sincerity of the emotion behind them. Similar tensions operate in other gently comic suburban satires of the period, such as Jerome K Jerome's Three Men in a Boat (1889), whose lower-middle class narrator writes: ‘I resolved, when I began to write this book, that I would be strictly truthful in all things; and so I will be, even if I have to employ hackneyed phrases for the purpose.’[6] He uses clichés because the reality of his life abounds with them. 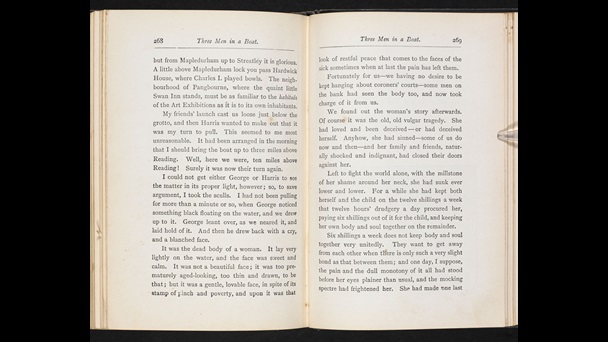 Three Men in a Boat (1889) is Jerome K Jerome’s hilarious account of a week-long rowing trip upon the Thames undertaken by him, two friends and a dog. In this passage the realities of life for society’s outcasts intrude on the holiday-makers’ fun.

H G Wells grew up in a distinctly Pooterish environment, as the son of a Bromley shopkeeper. He wrote extensively about the suburbs, both in his realist novels of the Edwardian period and in his late-Victorian scientific romances.

The History of Mr. Polly (1910) is a comic tale that bears comparison with The Diary of a Nobody: Polly shares some of Pooter's pitiable befuddlement and his social anxieties. But unlike Pooter, Polly hates Fishbourne, the suburban town where he has his home and his shop. Frustrated by his wife's nagging (a classic trope in literary depictions of the suburban housewife), and the emptiness of his existence, he burns down his shop in a botched suicide attempt, before leaving Fishbourne and his wife behind for a life of itinerant tramping. Ann Veronica (1909) presents its female protagonist with a similar choice: she leaves her father's house and the life of suburban conformity associated with it, finding herself drawn to the rising tide of suffragist feminism in London.

These realist novels of the Edwardian period fitted a fairly conventional pattern for suburban fiction, adding a rebellious streak to the milieu described by the Grossmiths and Jerome. The more unusual uses of suburban settings came in the late-Victorian period of Wells's work. The War of the Worlds (1898) saw Martians land near Woking, and make their way towards central London via well-known suburban locations such as Weybridge, Shepperton and Leatherhead. Did Wells take a certain pleasure in having his Martians lay waste to the suburban landscape which he viewed, at best, with ambivalence? Certainly, the novel relies for its effect on the contrast between the quotidian dullness of the locations in question and the catastrophic excitement of the interplanetary warfare being visited on them. Indeed, paradoxically, the very dullness and predictability that were associated with suburban life made the suburbs an ideal setting for fantastic and uncanny adventures, an association which continued into the 20th century.