When Tennyson died in 1892, 11,000 people applied for tickets to his funeral in Westminster Abbey. Dr Stephanie Forward considers the poet's huge popularity in the second half of the 19th century, and the decline of his reputation in the 20th.

‘Tennyson is a great poet, for reasons that are perfectly clear. He has three qualities which are seldom found together except in the greatest poets: abundance, variety, and complete competence’.[1]

Alfred, Lord Tennyson and his friends: a series of 25 portraits, Julia Margaret Cameron 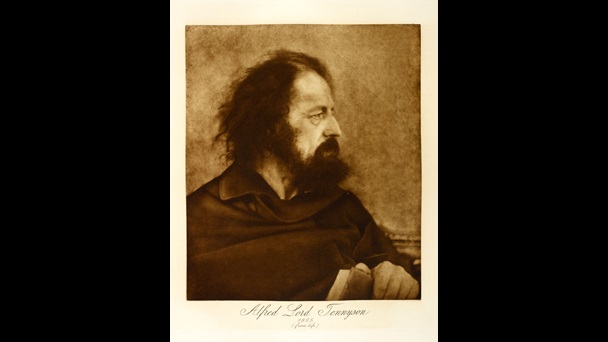 The reputation of Alfred, Lord Tennyson (1809–92) has fluctuated. Although he achieved great acclaim during his lifetime, there were always detractors. His poetry fell out of favour after his death, only to be esteemed again later.

The reaction to Poems, Chiefly Lyrical, published in 1830, was generally favourable. However when Tennyson’s next volume of poems came out in 1833, a number of critics were not impressed; indeed the poet was stunned by a lengthy, sarcastic mauling in The Quarterly Review on 6 April. The derogatory article was penned by John Wilson Croker, who had savaged John Keats’s Endymion back in 1818: indeed, Croker compared Tennyson to Keats. Later in 1833 Tennyson was devastated by the sudden death of his close friend Arthur Hallam. He felt deeply discouraged, and did not publish another collection until 1842.

‘Poets and Critics’ was published in 1892, but it was actually written very early in his career: these defiant words date from 1833–4:

What is true at last will tell:
Few at first will place thee well;
Some too low would have thee shine,
Some too high – no fault of thine –
Hold thine own, and work thy will!

Alfred Tennyson's notes on A New Study of Tennyson 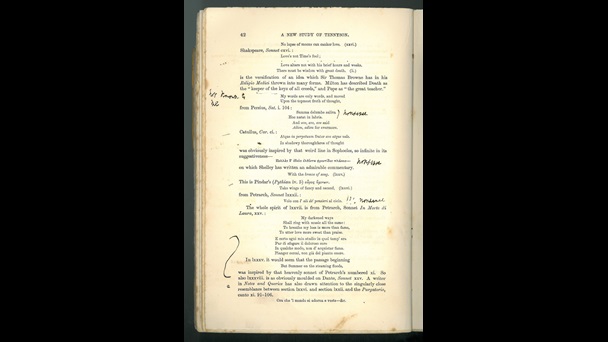 Page from A New Study of Tennyson in which Alfred Tennyson has repeatedly annotated the critic's argument as 'nonsense'.

Fortunately, Tennyson’s talents were genuinely appreciated – for example, by John Stuart Mill – and the two volumes of 1842 were mostly greeted with enthusiasm. These included revisions of earlier poems as well as new works.

Nevertheless Tennyson suffered from depression, undergoing hydropathic treatment for his melancholia. Adverse criticism could be very wounding. He once lamented: ‘When I am dead they will tear me to pieces, limb from limb’, and he is also recorded as saying:

In my youth the growls!
In mine age the owls!
After death the ghouls!’[2]

His fame grew – particularly after the publication of In Memoriam A.H.H., his poignant tribute to Arthur Hallam (1850). The same year, he succeeded Wordsworth as Poet Laureate. Devotees lionised Tennyson: he was lauded in literary circles and was also much in demand with society hostesses. Nevertheless, Maud (1855) was another work that was lambasted by critics (despite being popular with the public). Tennyson observed: ‘I have generally (always when I published, I believe) had to run the gauntlet of much stupidity and some spite’ (To Charles Weld, October 1855). 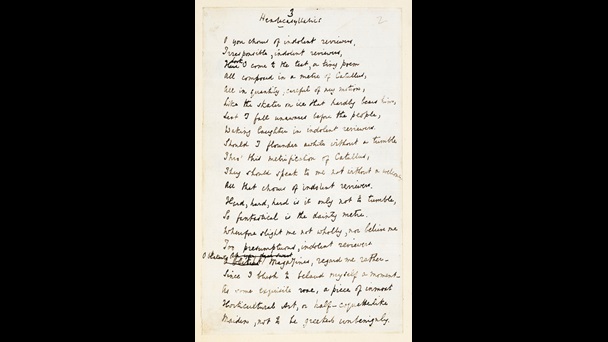 The volumes comprising Idylls of the King also caused division. This reflects the varying responses to his writing: while his work was widely revered, there were also negative reactions. Alfred Austin, who followed him as Poet Laureate, in 1896, was dismissive. In an essay on ‘Mr. Tennyson’, in The Poetry of the Period (1870), Austin declared:

In contrast Queen Victoria was fulsome in her praise, and enjoyed a cordial relationship with the poet. On four occasions he refused her offers of a baronetcy. Eventually in 1883 he decided to accept a peerage from Gladstone, declaring that he was doing so on behalf of literature. Tennyson was also popular with ordinary citizens: indeed, his privacy was invaded to such an extent that he became stressed by the intrusion of tourists.

Letter to Alfred Tennyson from a fan 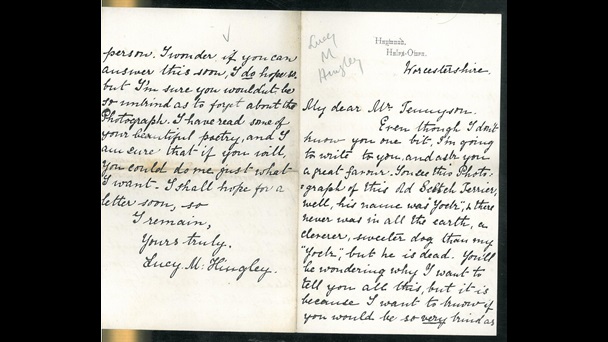 Letter from an enthusiastic fan to Alfred Lord Tennyson, requesting verses for her dead dog’s grave.

On the poet’s 80th birthday, Edmund Gosse attempted to assess Tennyson’s achievements. Gosse did not regard Tennyson as a pioneering figure; rather,

He has expended the treasures of his native talent on broadening and deepening his own hold upon the English language, until that has become an instrument upon which he is able to play a greater variety of melodies to perfection than any other man.[4]

When Tennyson died on 6 October 1892, the press devoted a huge amount of coverage to his passing. 11,000 people applied for tickets to his funeral in Westminster Abbey, but 10,000 were refused.

In his study The Presence of the Past: T.S. Eliot’s Victorian Inheritance D N Tobin noted that a young man writing poetry in the first decade of the 20th century,

would find it impossible to avoid the shadow of Tennyson. It wasn’t necessary to ‘discover’ him, or cultivate a special enthusiasm for him. One simply knew Tennyson, Tennysonian diction, Tennysonian nuance, Tennysonian themes.[5]

Yet over the course of his career Tennyson had been regarded with such adulation that a subsequent decline in his reputation was probably inevitable. Early in the 20th century his popularity wavered and declined: some found his style overly sentimental; others disliked its moralistic tone, or objected to jingoistic tendencies. He was lampooned or, simply, ignored. The Imagist poets differed markedly from Tennyson: their style was condensed, economical and precise. Indeed, Imagist Ezra Pound published a series of parodies of Tennyson (‘Alfred Venison’) in New English Weekly (1934). Some of these so-called ‘Alfie’ poems were recorded by the BBC in 1956.

In his 80s Thomas Hardy published ‘An Ancient to Ancients’ (1922), which contained these revealing lines:

The bower we shrined to Tennyson,

Is roof-wrecked; damps there drip upon

Sagged seats, the creeper-nails are rust,

The spider is sole denizen;

Even she who read those lines is dust,

In his Introduction to The Oxford Book of Modern Verse (1936), W B Yeats offered an explanation for the change in Tennyson’s status: ‘The revolt against Victorianism meant to the young poet a revolt against irrelevant descriptions of nature, the scientific and moral discursiveness of In Memoriam …’.[6] If we examine the first of these points it has to be acknowledged that, to some extent, Tennyson’s poetry was derivative. He was not dismissive about his predecessors: rather, he built upon the foundations established by earlier Romantic writers, and he certainly shared their reverence for nature. With regard to the second observation by Yeats, Tennyson always had a deep sense of responsibility and duty. Like many troubled figures of his era, he was well aware of disturbing aspects of contemporary life: for example, the sense of uncertainty evoked by the promulgation of scientific theories and the voicing of religious doubts.

He offered what seemed to the majority of his readers a convincing vindication of Christianity, while at the same time ministering in a comforting way to their sense that the age really was one of progress and enlightenment. The fact that this compromise settled into a smug complacency should not make us forget the genuine pain and self-questioning with which it was evolved.[7]

Today Tennyson is often seen as a figure who represented the Victorian age. In Alfred Tennyson: The Critical Legacy Laurence W Mazzeno maintains:

No poet has ever or since been more closely associated with his times than Alfred Tennyson. The Victorians were captivated by his poetry. He could make them weep … He could stir up controversy … And above all, he could offer readers the possibility of hope emerging from grief …[8]