The Gentle Author explores William Marshall Craig’s Cries of London prints, which portray the realities of life for street traders in the early 19th century.

In spite of their colourful aesthetic, these fascinating prints of Itinerant Traders by William Marshall Craig are unexpectedly revealing of the reality of the lives of the dispossessed and outcast poor who sought a living on the streets as hawkers at the beginning of the 19th century. Look again at the showman in the gaudy uniform with the peep show in the turquoise box and the red squirrel in a wheel – in fact, this reserved gentleman is a veteran who lost a leg in the war. Observe the woman in Soho Square feeding her baby and minding a bundle of rushes while her husband seeks chairs to mend in the vicinity – she looks careworn. 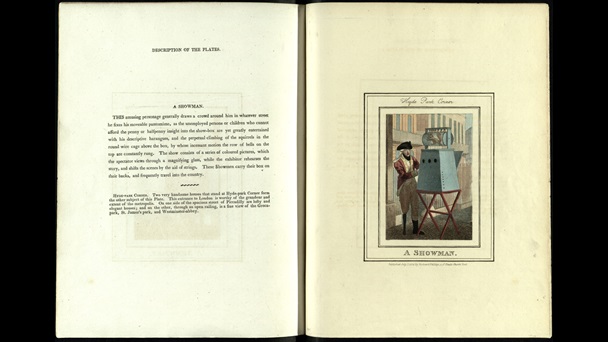 The Showman from William Marshall Craig's Cries of London series, The Itinerant Traders of London, 1804.

A fashionable portrait artist who exhibited at the Royal Academy between 1788 and 1827, William Marshall Craig was appointed painter in water colours to Queen Charlotte. In this set of prints he dignifies the itinerant traders by including some unsentimental portraits of individuals, allowing them self-possession even as they proffer their wares in eager expectation of a sale. In his drawings, engraved onto 31 plates by Edward Edwards, Craig shows tenderness and human sympathy, acknowledging the dignity of working people in portrayals that admit the vulnerability and occasional weariness of those who woke in the dawn to spend their days trudging the streets, crying their wares in all weathers. Despite their representation with rosy cheeks and clothes of pantomime prettiness, we can see these are street-wise professionals – born survivors – who could turn a sixpence as easily as a penny and knew how to scratch a living out of little more than resourcefulness.

A popular tradition dating back centuries

William Marshall Craig’s itinerants exist in a popular tradition of illustrated prints of the Cries of London that began in the 17th century. This was preceded by verse such as ‘London Lackpenny’, attributed to the 15th-century poet John Lydgate, which recorded an oral culture of hawkers’ cries that is as old as the city itself. In the 20th century, the ‘Cries of London’ found their way onto cigarette cards, chocolate boxes and, famously, tins of Yardley talcum powder, becoming divorced from the reality they once represented as time went by, copied and recopied by different artists.

The sentimentally cheerful tones applied by hand to William Marshall Craig’s prints, that were contrived to appeal to the casual purchaser, chime with the resilience required by traders selling in the street. And it is our respect for their spirit and resourcefulness which may account for the long lasting popularity of these poignant images of the self-respecting poor who turned their trades into performances. By making the streets their theatre, they won the lasting affections of generations of Londoners in the process, and came to manifest the very soul of the city. Even now, it is impossible to hear the cries of market traders and newspaper sellers without succumbing to their spell, as the last reverberations of a great cacophonous symphony echoing across time and through the streets of London.

Yet there is contradictory side to this affection. Equally, street traders have always been perceived as socially ambivalent characters with an identity barely distinguished from vagabonds. The suspicion that their itinerant nature facilitated thieving and illicit dealing, or that women might be selling their bodies as well as their legitimate wares, has never been dispelled. It is a tension institutionalised in this country through the issuing of licences, criminalising those denied such official endorsement, while on the continent of Europe the right to sell in the street is automatically granted to every citizen. 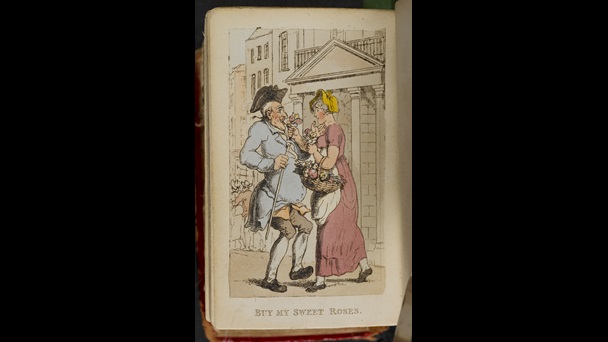 Thomas Rowlandson’s Characteristic Sketches of the Lower Orders (1820) dramatizes the social tensions between trader and customer, providing a less sanitised vision of the Cries of London.

Bringing life to the city

William Marshall Craig placed each of his itinerants within a picturesque view of London, thus giving extra value to the buyer by simultaneously celebrating the wonders of architectural development as well as the infinite variety of street traders. But there is a disparity between the modest humanity of the hawkers and the meticulously rendered monumentalism of the city. These characters are as out of place as those unreal figures in artists’ impressions of new developments, placed there to sell the latest scheme. Even as the noble buildings and squares of Georgian London speak of the collective desire for social order, the presence of the hawkers manifests a delight in human ingenuity and the playful anarchy of those who come singing through the streets. Depending upon your point of view, the itinerants are those who bring life to the city through their occupation of its streets or they are outcasts who have no place in a developed modern urban environment. 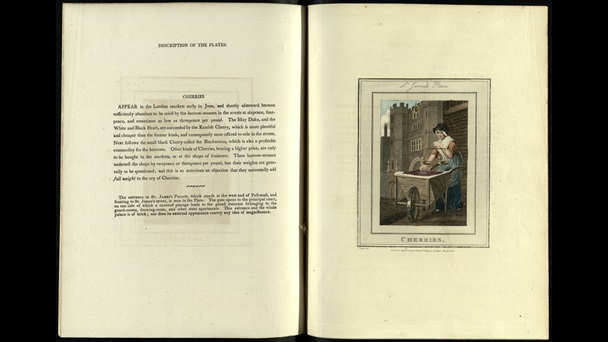 William Marshall Craig's Cries of London celebrates London's architecture, but in doing so highlights the disparity between street sellers and the monumentalism of the city.

The essential truth of London

Yet none can resist the romance of the Cries of London and the raffish appeal of the liberty of vagabondage, of those who had no indenture or task master, and who travelled wide throughout the city, witnessing the spectacle of its streets, speaking with a wide variety of customers, and seeing life. In the densely populated neighbourhoods, it was the itinerants’ cries that marked the times of day and announced the changing seasons of the year. Before the motorcar, their calls were a constant of street life in London. Before advertising, their songs were the announcement of the latest, freshest produce or appealing gimcrack. Before radio, and television, and internet, they were the harbingers of news, and gossip, and novelty ballads. These itinerants had nothing but they had possession of the city.

William Marshall Craig’s prints reveal that he understood the essential truth of London street traders, and it is one that still holds today - they do not need your sympathy, they only want your respect, and your money.